Every Story Has Its Own Integrity 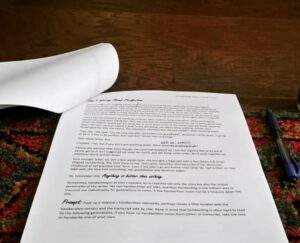 Every story develops its own integrity. There are things that belong in it, and things that don’t.

If you’ve worked on it for a while, it will take on a life of its own.

I was reminded of that again the other day when, in the midst of overhauling my book manuscript, I was going through a chapter about a trip to Israel. I felt I had to add a section about a visit to a Chasidic site in the Golan Mountains. So I wrote that in. Later I was reviewing previous material from that chapter that I had saved in a “parking lot,” and what did I find? A paragraph about that very same Chasidic site, which I had taken out months ago! I had cut it, and I didn’t remember it at all, but the story knew. The manuscript knew.

It did belong because reading through that chapter, I felt it was missing. I had messed with the integrity of the story, and it was reasserting itself.

I first learned about the beauty of this phenomenon in a writing class many years ago. A classmate submitted a story about running into the woman who’d bullied her in high school. The former cheerleader had turned into a disheveled thirty-something on her third marriage. Everyone in the class remarked on the ending of the story, in which the narrator tells off the former bully. Some said “Good for you,” others were surprised to see the narrator do this. After the workshop round, the writer confessed that she’d made up that ending. The truth was that she had not told off that former bully, but had felt sorry for her. Their meeting had been rather uneventful.

She had violated the integrity of this true story in the worst possible way: by making something up. But the point is that we readers could sense that.