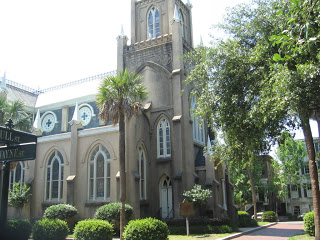 My shot of the outside of the synagogue. I love the mix of palm trees and live oak!

Today a short note from my travels: I spent the early afternoon in Savannah, Georgia, mainly to have lunch with a former client from my corporate consulting days.

I also visited the third oldest Jewish congregation in the U.S., Mickve Israel and their neo-Gothic synagogue that to me looks like a church.

Being Reform, it even has an organ. The building itself was completed in 1878, at the height of the Victorian era when neo-Gothic was all the rage. The congregation, however, dates back to 1733. 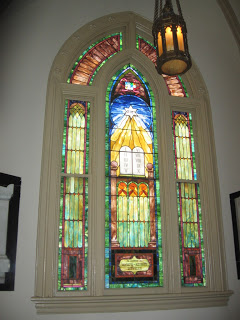 Proof that this is not a church: Search for the Star of David in the upper part of the window. And the Hebrew lettering, of course.

The inside of the synagogue features stunning colored glass windows, the likes of which I have not seen in other synagogues. 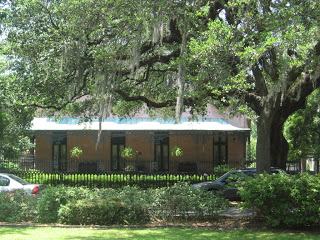 Of course I walked around downtown Savannah as well and fell in love with those stately live oak trees and the Spanish moss.

How lovely to walk through those shady squares and take snapshots of all those old homes with their wrought-iron lattice work. It was a short stopover as I had to head back to Charlotte to attend the alumni conference and 10th anniversary celebration of my MFA in Creative Writing Program at Queens University of Charlotte. I’m in the Queen’s city now, but thank you, Savannah, for a charming interlude. I’m glad I stopped by!
Annette Admin2021-10-12T21:18:35-05:00May 20th, 2011|Tags: Travel|