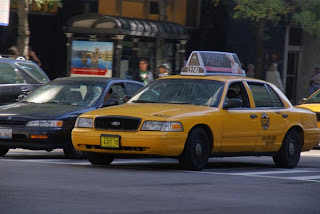 Many years ago I took a writing class in which the instructor asked us to eavesdrop on a conversation in order to practice writing dialogue.

One way to bring a person to life on the page, to capture their personality, is to capture their voice. I didn’t like the idea of eavesdropping and procrastinated. Eventually I did go to the local diner and tried to eavesdrop but nothing interesting was forthcoming. I was about to pass on that assignment when, on the very last day before it was due, I had to take a taxi from work to pick up my daughter on time.

It was the oddest cab drive ever. Only later that evening did it dawn on me that I had been handed the perfect conversation to practice writing dialogue.

I’ve never been able to publish the resulting story, so I’m sharing it with you here with the little nudge to keep your eyes and your ears open. You never know what treasure of a character you might come across! And if you meet such a treasure, write down those snippets of speech before they escape your memory.

My watch shows 5:05 p.m. I’m supposed to pick up my daughter at 5:15. No way I’ll make it, but with a taxi I’ll get there fifteen minutes earlier. I dash out of my office building. A fat yellow cab is pulling out of the Holiday Inn driveway across the street. The driver beckons. I get in.
“Come on lady, this is cab you want. Not only is this the cab you want, I’m the driver you want.” Boy, does he have a loud voice. I decide to be congenial: “Yes, you are.”
“Where are we going?”
“Hyde Park. 53rd Street exit.”
“Then it’s probably best to get on the Drive here, since Columbus is closed?”
“Yes, that will be quickest. I’m already late to pick up my daughter.”
“Where’s she at?”
“What do you mean?”
“She at Lab School?”
“No, no, she’s at the Hyde Park Art Center.”
“How old is she?”
“She’s seven.”
“I remember when mine were seven.”
“You got daughters?”
“Yes, two daughters from two ex-wives. All very different from me.”
“So you have lots of women in your life then.”
“Sure do.”
“How old are your daughters?”
“One is 21, the other 16, but I remember those days when they were seven.”
“I can’t believe mine is seven already. I’m actually picking her up to go to a yoga class together.”
“Kid’s seven years old taking yoga? What’s the world coming to? What else they’re taking these days?”
“No, no, it’s a good thing. You know, she has a lot of tension and it’s good for us to do this together.”
”She’s got a lot of tension? What’s a seven year old girl gotta have tension about?”
“Well, you know…”
“No, no, it’s a good thing. I’m just kidding. You noticed you’re riding in cab number one today?”
I glance at the cab number sign right in front of me on the partition wall. Indeed, a stamped-out black and white ”1” is stuck on where normally a four-digit cab-number would be.
“Wow! How did you get that number?”
“Scratched it off. No, I won the cab rodeo.”
“The cab rodeo? What’s that?”
“Just a fun thing we cab drivers get to do every year.”
“So what do you do?”
“Well, they’ve got an obstacle course and you’ve got to drive through it, steering with your knees and eat a hamburger and balance a beer in the other hand. Then a whole lot of luggage and a bunch of odd shaped suitcases that only fit into the trunk a certain way. And they’ve got that car where you ride in the trunk and have to steer through the back window with ropes attached to the wheel.”
“Wow, good for you. Sounds like a lot of fun.”
“No, no, I’m just kidding. I scratched it off.”
“No, no, no, but I liked that story! That was a good story.”
“Well, there’s something else you don’t know.”
“What’s that?”
“Not only have you landed in cab number one, you’ve also got the Singing Cab Driver.”
“You sing? Good for you.”
“Want me to sing you a song?”
I shift in my seat, but decide to go for it: “Sure.”
“Love! Sex! Social Significance! Dreams! Other!”
“Other.”
“Movies. Working. Playing. Talking. Commercialism. Shopping. Driving. Dancing.”
“Driving.”
“Alright. You’re the second passenger today to request that. This song’s been performed with my band Chameleon World, on Wild Chicago, as a one man musical, used to be available on cassette, now on hounddog. As I say, leave urban transportation to the professionals. When you find yourself in my backseat, you know your karma is due!”

I stare out the window. The Loop’s Skyline zooms by, windowpanes glittering in the sunset. This guy starts to sing, slapping the steering wheel to create a rock-and-roll sort of beat:

Turn the key, start the motor and roam
We’re in a hurry, just don’t want to be slow
No destination, we just go baby go
Because I love to drive
Go baby go
I really love to drive
With you by my side
Go baby go
It’s late at night, put the city to sleep
Hush all the lights, the city’s a blur
I stayed ahead, forgot where we were
Because I love to drive
Go baby go
Cruising the empty interstate, just follow those signs to the dawn
Your head on my shoulder, my hand on your leg
Tank full of gas and we’re gone
Clinging to the wheel of my automobile
I hit those curves
I love how you feel
Follow the bright lights, leave the city behind
It’s not a highway
It’s a state of mind
Because I love to drive
With you by my side…
Go baby go, go baby, go baby, go!
I shift a few more times in my seat, figure it might be impolite to stare out the window the entire time, so I move my glance in his direction. His head is somewhat rectangular. He sings quite well.
“Well, thank you very much. That was a very nice song,” I say when he’s done.
Traffic is moving along nicely. Maybe I won’t be too late. We exit the Drive at 53rd. It’s 5:30.
“Could you let me off right before the light?”
The car stops and I hold up a $20 bill. ”Change for 17?”
“Here you go. Here’s my card.”
”Oh, thank you. Have a good evening.”
I stuff his card in my bag, slam the door and dash towards the Art Center. Later the cabby’s neon-green card falls into my hands again. I finally pay attention and realize I happened upon a Chicago legend.

A self-proclaimed legend perhaps, but my fifteen minutes with the singing cab driver won’t vanish into the heap of all the other fifteen minute cab rides. Rides bought to rush me from one spot to another, bought to save time, not to savor the journey.