The Strange Obligation to “Having a Summer” 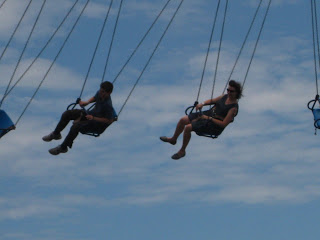 Labor Day marks the “official” end of summer, and thus it’s time to ask whether one has made the most of the season of heat, beach and long, supposedly lazy days.

When I first moved to the U.S. and people started asking me:

“Are you having a nice summer?

I was puzzled by the question. How do you have a summer? And why was I supposed to have a summer as opposed to any other season? I was a working adult and often didn’t even take a vacation in the summer. So why would summer be any different? Why weren’t people asking, come November, whether I’d had a nice fall?

These days I ask the question myself, especially as my kids return to school and I connect with other parents.

And that’s also how I initially came to understand it: Summer is still associated with massive amounts of free time that apparently many Americans have over their almost three month break from school over the summer.

Even if you’re not in school or college or university anymore, you’re still supposed to have a summer.

Before I even understood the question in its cultural context (and please enlighten me further!), I understood it as a check-in to see whether you were capable of taking advantage of the nice weather. Were you able to live in the moment and savor the season of late daylight?

So I made a list for myself of all the things that signify summer for me and that I want to make sure I don’t forget about.

Checking off many of them would ensure I’d had a good summer:

That list is still on the fridge, yellowed and a big dog-eared.

My daughter is slightly bemused by it, as popsicles are, for example, something for little kids. And yet, what says summer like a home-made popsicle?