Sometimes life hands you bliss on a silver platter – but how to capture that joy?

I will give it a try here by sharing a recent experience, and you, dear reader, will hopefully let me know if I succeeded. 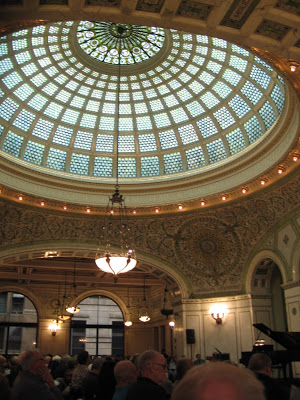 Last Wednesday I was touring downtown Chicago with my aunt and uncle, who were visiting from Michigan. We explored Millennium Park and marveled at our reflections in the “Bean.” I pointed out the many changes in the skyline of the last decade, and we reminisced about touring Paris together many years ago. Then an already blustery day turned into a rainy day, and the temperature started dropping, so we turned in for an early lunch at the Corner Bakery. After that we braved the cold again, wandering north on Michigan Ave. I kept pulling my hood over my head, and the wind kept whipping it off. By the time we reached the Chicago Cultural Center, the idea of warming up in a building seemed awfully attractive, so I said: “Let’s step in there; I’ll show you the Tiffany Dome.”

When I asked the guy at the information desk whether we could go up to see the Tiffany Dome, he said: “You sure can, in fact, they are setting up the piano there now. There’s a concert beginning in a few minutes, and it’s free.”

I was intrigued. My aunt and uncle love music.
I looked at them, their hands still deep in their coat pockets, and asked: “Shall we do that?”
“Sure.”
So we climbed the staircase with all the mosaics on its walls, made of small shards of colored glass in between cream-colored tiles. Walking up you already know you’ve reached an oasis. Upstairs an usher greeted us, gesticulating for us to hurry: “There are seats on the sides, seats on the sides.” Over loud speakers, an announcer was already reviewing the résumé of the musicians.

I glimpsed the sea green dome shimmering above the heads of the people seated in the middle of the Preston Bradley Hall that, just like the staircase, featured cream-colored walls, set with tiny mosaics.

Indeed there were empty seats in the side wing of the hall, not under the dome but close enough to marvel at it, and not too far from where a grand piano was set up on a podium.

Once I settled into a seat, the program on my lap, I was mainly awestruck by the jewel box I found myself in, and the good fortune that such places exist, right here in the city.

Outside people were rushing about on their lunch hour, nipped at by the wind, and I was cozy inside. It wasn’t only warm but the walls sparkled and the largest art glass dome made by Tiffany rose above me. Then the musicians appeared. The program announced Blagoj Lamnjov, Clarinet, and Kuang-Hao Huang, Piano.

It wasn’t until the undulating sound of the clarinet rippled through the hall that the true serendipity of this moment hit me: The clarinet is my sister’s instrument.

I leaned over to my uncle and whispered: “My sister would have loved this.” He nodded knowingly. She had visited with him and my aunt earlier this year, and, together with my mother, they had made music: My sister on the clarinet, my mother on the piano, my uncle and my mother singing. And now, on this lunch hour on a blustery cold November day in Chicago, under a Tiffany Dome from 1897 that by itself makes your heart soar, I was listening to the first selection of this Dame Myra Hess Memorial Concert, André Messager’s Solo de Concurs for Clarinet and Piano (Listen!).

The strings of family – what we do together, what we appreciate, and who we care about – were coming together, and I was floating in the bliss of having stepped into this moment.