Encounter with Art on the Midway Plaisance in Chicago 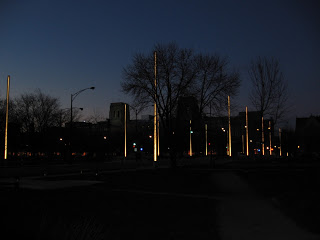 In Chicago you don’t have to go to a museum to experience art. Rather, you’ll encounter it on your everyday ramblings.

Case in point: The other day I dropped one of my sons off for an appointment in our neighborhood, and as it wasn’t quite dark yet, I took the opportunity to walk the nearby Midway Plaisance, one of Chicago’s big boulevards. It is so wide that it houses an ice rink and soccer fields between both lanes of traffic.

These days it is also home to the “Light Sabers,” and it was such a treat to meet them in their illuminated glory.

Officially called the Light Bridges, they were designed by New York artist James Carpenter, and stand sentinel along Ellis and Woodlawn Avenues, across the Midway Plaisance in Hyde Park.

The crossing at Ellis is special to me because as a grad student I used to live south of the Midway, and thus walked along Ellis to get to campus. I remember the walk as cold and drafty, with the sidewalks cracked and the scraggly traffic lights swaying the wind. 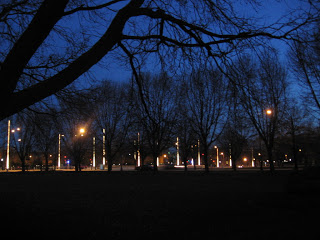 Now it’s a brave new world with brand new concrete sidewalks that curve around those light beams that beckon through the trees. And lots of people are walking back and forth since there’s a new dorm south of the Midway.

But mainly it was a treat to see how those beams of light enlivened a formerly dire area, and how they played against the cobalt sky and the black silhouettes of the trees.