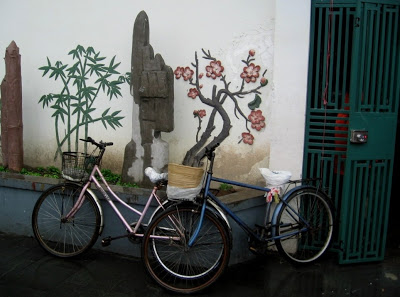 Just as the laundry hung out to dry on eletrical cables, parking signs and telephone booths,

the prevalence of bikes in the streets of Shanghai struck me as so very different from what you see in an American city.

This is an unusually contemplative and peaceful shot of two bikes parked in the market area of Nanshi, the Old City. 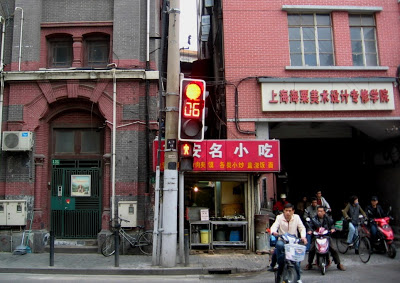 Bike riders are usually solitary apparitions in American cities, so I often felt as if an army of bikes was coming at me, as in this scene in the Bund area.

A bunch of biking commuters are waiting for the light to change, like a platoon ready to charge.

By the way, I loved these smart stop lights they have in Shanghai, that show how long it’s going to take for the light to change. Pedestrian lights do that in Chicago, so as a driver I tend to watch those to see if I can still make it across the intersection or not. 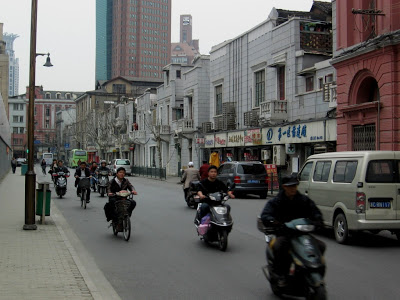 Here the army of bikes is on the move, also in the Bund area. You can see the social strata displayed as well: Those who can afford it have a motor scooter, if not that, then a bicycle with a motor, and lastly, someone who actually pedals.

On wider streets, bikes will have their own lane, separated from the other traffic. Here a street scene in Suzhou, a “smaller” city about 1.5 hours from Shanghai. I put “smaller” in quotation marks, because in China, a small city like Suzhou has 8 million inhabitants, as opposed to Shanghai’s roughly 20 million.

Bikes are everywhere. The “drrt drrt” sputter of a motor scooter even follows you through “pedestrian” areas like this walkway at Tiger Hill in Suzhou. 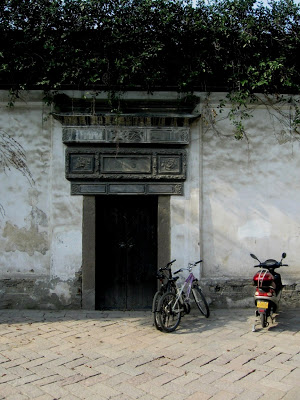 Parked bikes in front of an old garden wall in Suzhou make for a more contemplative shot. 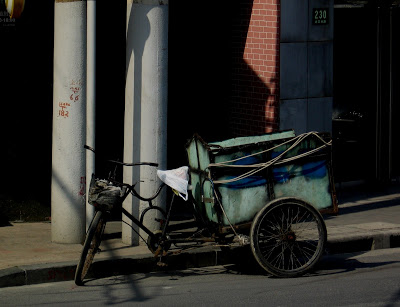 A contemplative sight can also be this – a tricycle made for cargo where you feel the owner has just left. Hongkou District, Shanghai

Or here, a lone schlepper in the Bund area, in front of one of those amazing art deco buildings in Shanghai that seem so familiar and so Western, and yet there is something foreign about them as well. 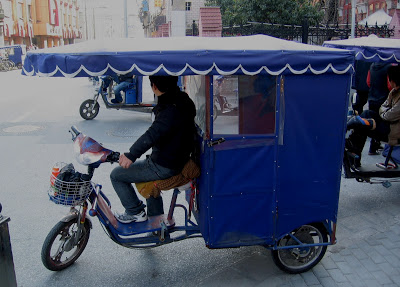 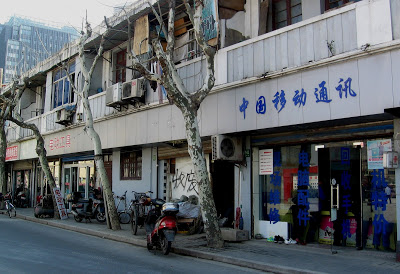 A sidewalk is taken over by bikes in Hongkou. 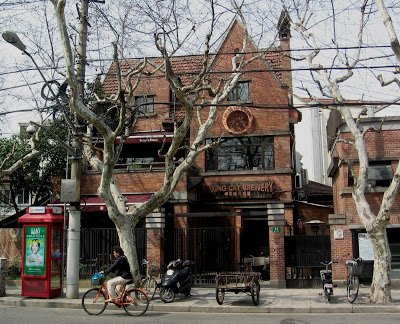 Every kind of bike, parked a little more orderly, on a side walk in the former French Concession. 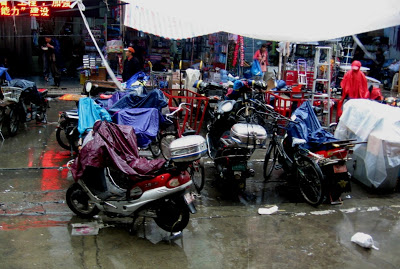 Here, another army, wet and disorderly, but at rest. 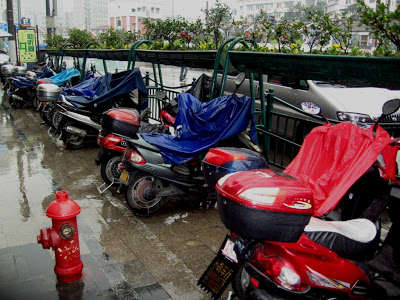 Still wet, but orderly – a bike parking lot, with greenery.

Bikers in formation, all equipped for the rain. Typical here also the stubby plane trees that line the streets of Shanghai, still naked at the end of March.

A peek into an alleyway in the Old Market area in Nashi.