Chicago Art Deco at the Powhatan 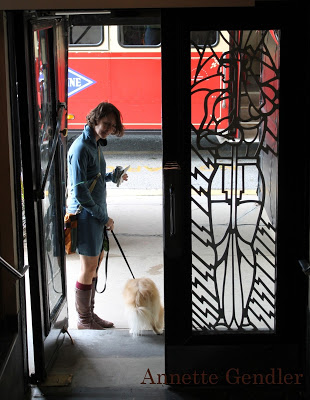 This past weekend the Chicago Architecture Foundation held its annual Open House Chicago event, when 150 buildings open their doors to behind-the-scenes viewing. Unfortunately I didn’t have the time to go on a lengthier tour as we are in the midst of redoing our kids’ rooms and closets (a project I might chronicle soon); however, my daughter and I did go for a walk on this blustery Sunday and stuck our heads into the Powhatan Apartments building, a few blocks from where we live. Thus I am happy to share an intimate view of Chicago art deco when I have previously only shown Shanghai art deco architecture.

The 22-story Powhatan as seen from the pedestrian bridge over Lake Shore Drive at 51st Street – most striking on the facade are the terracotta panels that embellish the upper 17 stories. Each one of them, so the Powhatan Building Cooperation’s info pamphlet tells me, is different, featuring abstractions of Native American motifs such as arrow heads, wigwams, etc. This, however, one cannot discern as a visitor. 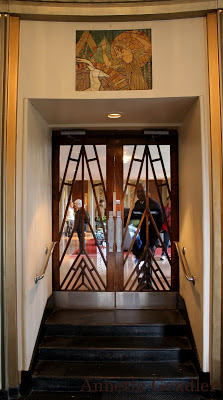 The arrowhead motif repeats in the cut-out panels of the doors to the inner lobby. 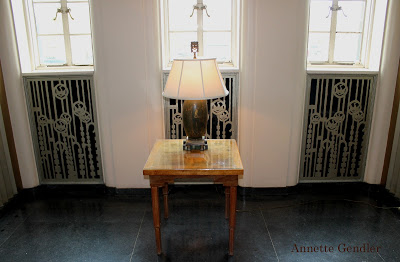 The radiator grilles in the inner lobby feature highly stylized floral motifs. All these decorative details on the inside of building were designed by Charles Morgan, while the structure itself was designed by Robert S. DeGolyer. The Powhatan opened in 1929 and is now a designated landmark. 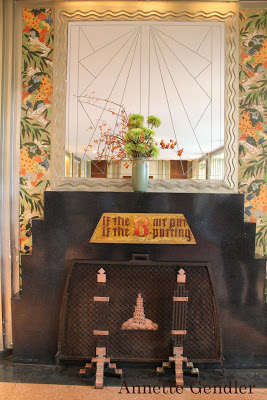 The fireplace mirror again picks up the diagonal lines of the arrowhead motif, the decorative panels add color with more pictorial birds and flowers. Above the fire hole is a mosaic with a rebus that I could not decipher without the help of the tour guide: 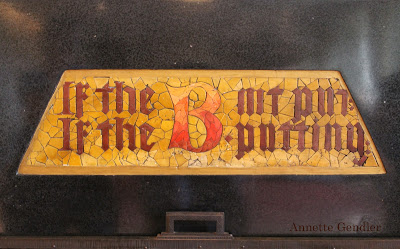 In a 1929 version of text messaging, the rebus says:
“If the grate be empty put coal on.
If grate be full, stop putting coal on.” 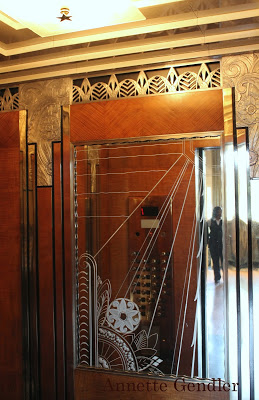 Here, a glimpse into the elevator with its etched mirror and aluminum ornament of geometric flowers against the burled wood paneling. A place like this, where so much attention has gone into every detail, always makes me feel special, “elevated” if you want. Even the mundane activity of traveling between floors can be elegant. 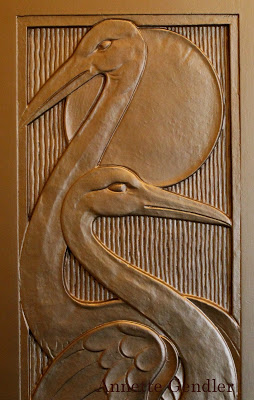 Apropos elegant – what could be more elegant than swans? This is a close-up of a door detail. 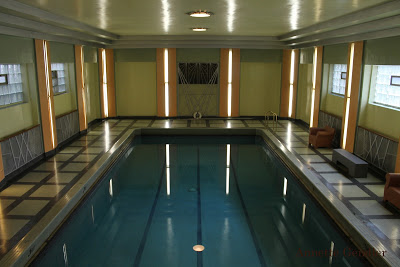 The pool at the Powhatan: Spare and yet not entirely utilitarian thanks to geometric but highly abstract panels. I wonder if the inhabitants of the Powhatan feel special just swimming here?

Walking to the pool from the lobby you pass through an anteroom, decorated with these mosaic panels that were inspired by mural abstractions featured in Frank Lloyd Wright projects, with whom Morgan had worked just prior to doing the Powhatan. The more I look at them, the more I see soap bubbles.
Annette Admin2021-08-01T23:00:01-05:00October 18th, 2012|Tags: Architecture, Chicago, Photography, Place|