Inspired by Xanthe Berkeley’s challenge on Shuttersisters to create a time capsule of 12/12/12, I decided to capture this ordinary day so that sometime in the future, maybe 20 years from now (should this blogging platform still exist, or rather be accessible with the technology we might have then), I can look back into my life, into what an ordinary Wednesday with an extraordinary date was like.

First I thought I’d better do something exciting today in order to have something to report because usually Wednesdays are my treasured quiet days at home. But then I decided that no, I shall capture this quiet day as it is, even though that might be more challenging than having an action-filled day to describe. 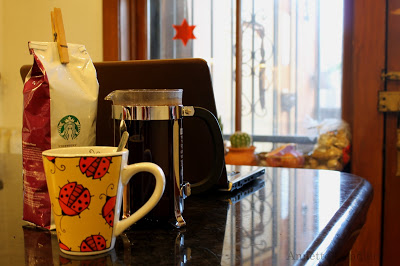 This is how the quiet part of the day begins: After seeing my younger son off to school shortly after eight (the older two kids leave for school at seven), and my husband has said good-bye, I clean up the kitchen, load the dishwasher (my husband fixes breakfast and the kids’ lunches), dust myself off and then I sit at the kitchen counter, check my blog, email and Twitter account while brewing the second pot of coffee. The first pot gets brewed right after I get up at 6:30; it provides the essential caffeine to get me going. The second pot, however, is luxury to be savored while I begin my writing day. 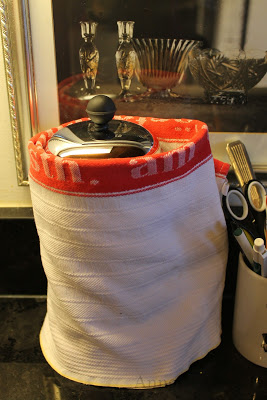 I have the habit of wrapping the French press coffee pot in a large dishtowel to keep the coffee warm. The towel that has just the right size for this task is from my mother’s days as a singer in the opera chorus at Munich’s Gärtnerplatz theatre, and so the letters woven into the red band in the middle of the towel say “Staatstheater am Gärtnerplatz.” 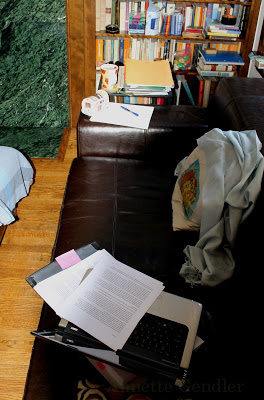 This is where I spend the better part of the morning and a large chunk of the afternoon, growing roots on my couch, typing into the laptop. 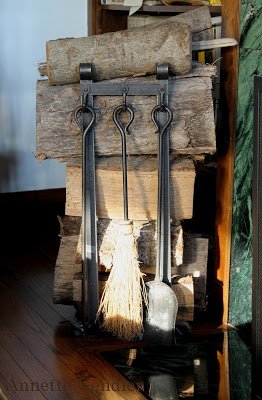 At some point in the morning, I look up from my spot on the couch to see the sunlight illuminate the little broom by our stack of firewood. I fetch the camera to catch this short appearance of warm yellow because sure enough, a few minutes later the sun has moved on and that particular ray of light is gone. 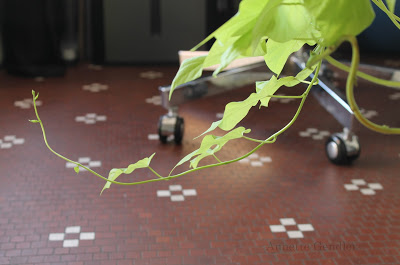 During one of my few breaks from sitting on the couch, I crouch on the sun porch to snap this picture of the sweet potato vine that cascades down from my desk and still thinks it’s summer.

Eventually I have to leave the couch to go to a doctor’s appointment. While waiting, I work through a manuscript for the class I’m teaching tomorrow which helps me not get annoyed that I have to wait for more than half an hour. After the doctor’s, I stop by the grocery store for milk, bananas, bread, and eggs. Not my favorite thing to do but those are all essentials we’re running low on. Tomorrow my husband will head to Costco for the weekly grocery run. 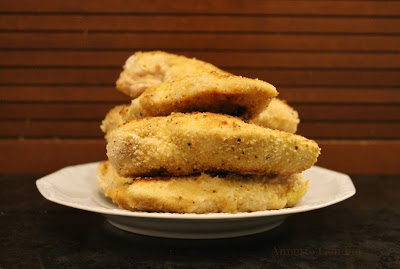 Upon returning home, I fry a stack of schnitzel (I bread them with Matzo Ball mix) for dinner, after all, I have three hungry men to feed. Every time I do that, make schnitzel that is, I think of my mother-in-law who, when she would be visiting us, would be standing in our kitchen right where I am standing, frying schnitzel. Those were the days when I could hand over making dinner to her! It’s been more than two years since she passed away, and so it’s comforting that she keeps popping up in my life. 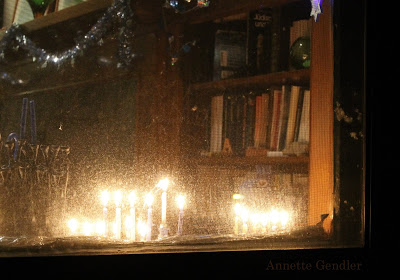 We wrap up the day by kindling Chanukah lights, and spending some time in the living room looking at the flames and discussing what American literature the kids have, or rather, haven’t read. That was a question of mine. It’s the fifth night of Chanukah and by now all those candles generate so much heat (each family member has his/her own menorah) that some candles on mine, off to the left in this picture, flop over and my vigilant son has to blow them out.