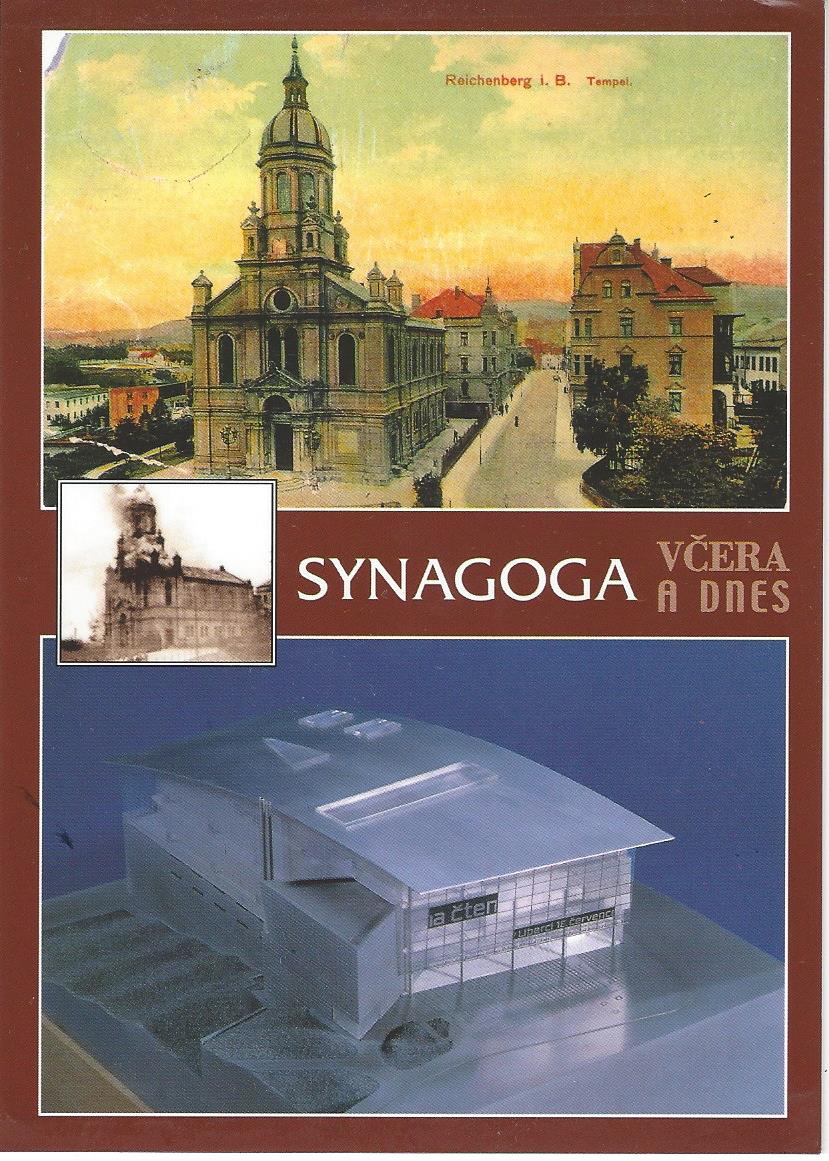 Today marks the 79th anniversary of Kristallnacht, the night of broken glass, when most of the synagogues in the German Reich were destroyed along with Jewish shops and businesses. Until I researched my Jewish family history while writing Jumping Over Shadows, I didn’t know that the destruction of the synagogue in my grandparents’ hometown of Reichenberg (now Liberec) was directly connected to my Jewish great-uncle Guido:

“Guido never found out that the synagogue his father had helped build went up in flames during Kristallnacht, the night of November 9, 1938. The Reichenberger had been so eager that they didn’t even wait for the cover of darkness and set the synagogue ablaze at one o’clock in the afternoon. A mob gathered to watch; the fire brigade never showed up, and at 2:43 p.m. the dome with the Star of David came crashing down, to the cheers of the crowd. My grandmother spent that entire day at Guido’s bed side.” p. 65

Whenever I reread this, I wince. It just hurts.

The image above is a postcard I picked up on one of my many travels to Reichenberg, and the little inserted picture is the only image I have been able to find of the day of Kristallnacht, showing the synagogue in flames. The bigger image on top shows what the synagogue looked like in all its glory. Following are a few more images of the “temple,” as it was also called: 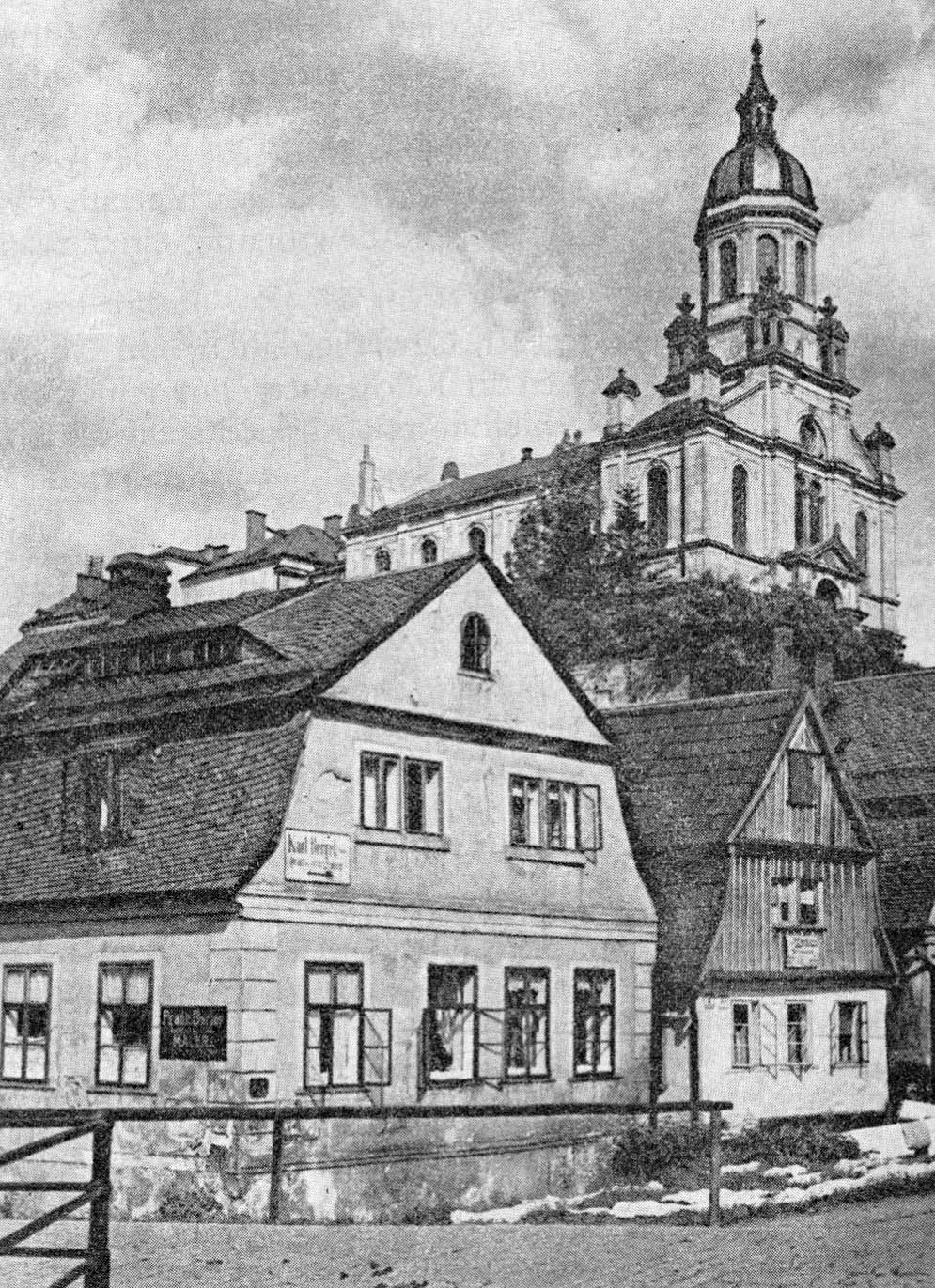 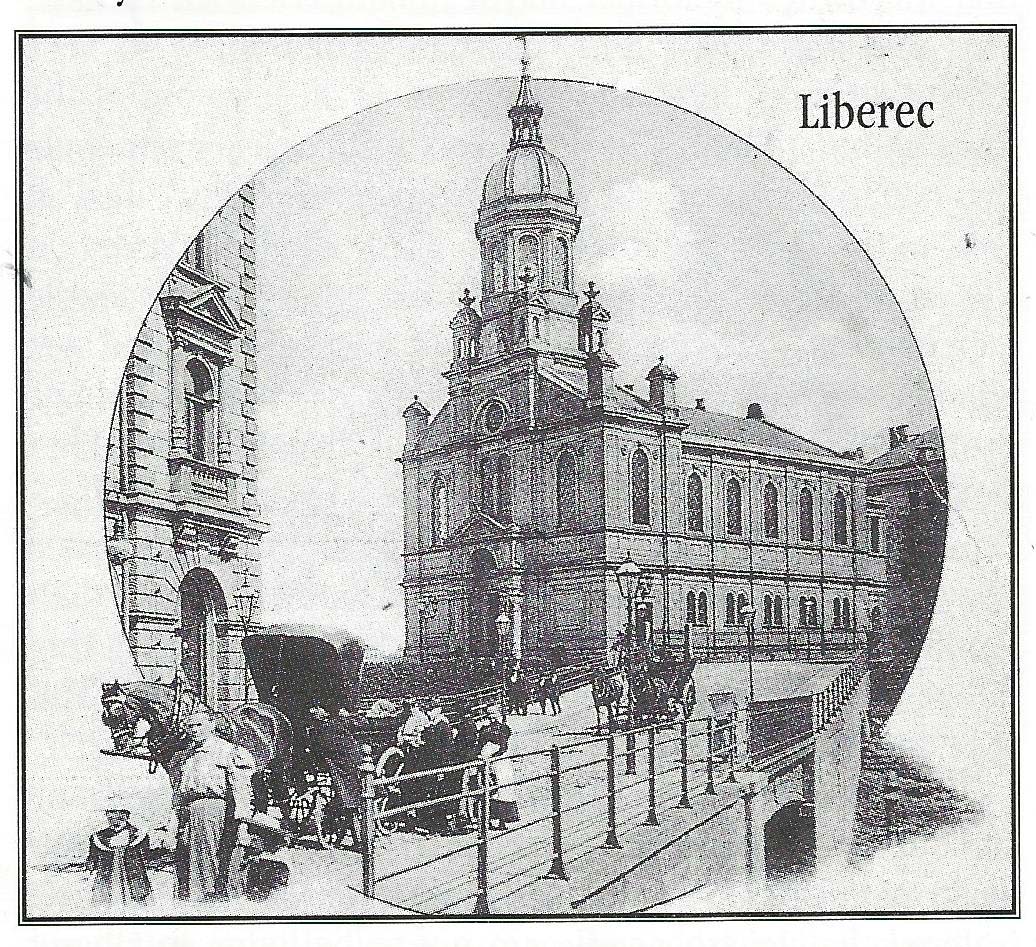 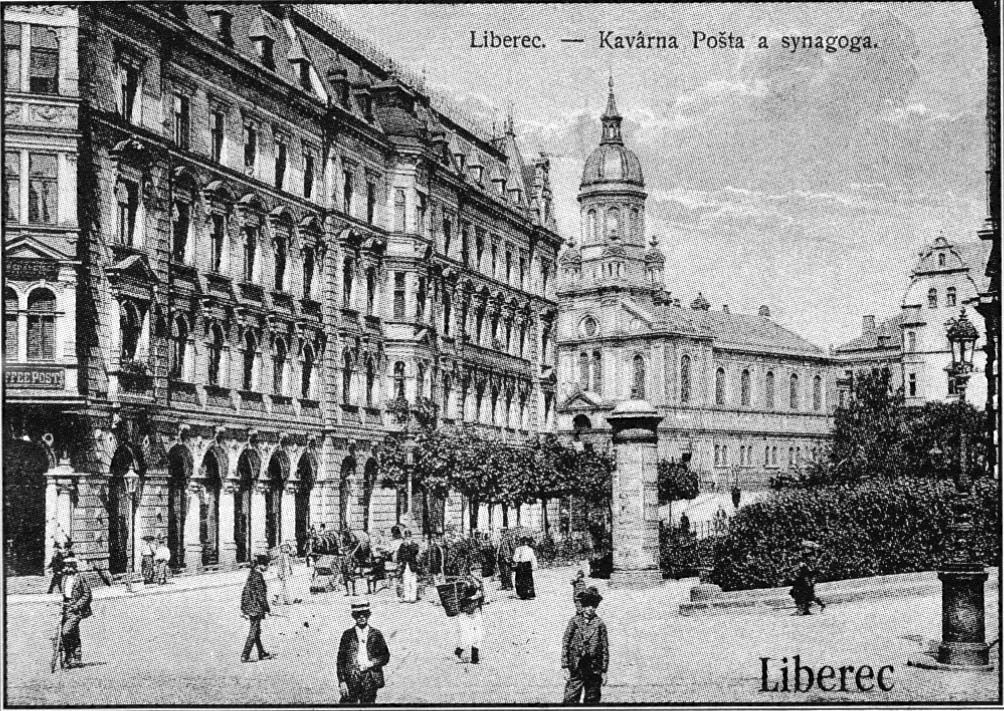 This image shows the synagogue where it used to be, up the street from the Café Post, the entrance of which you see on the picture’s left margin. 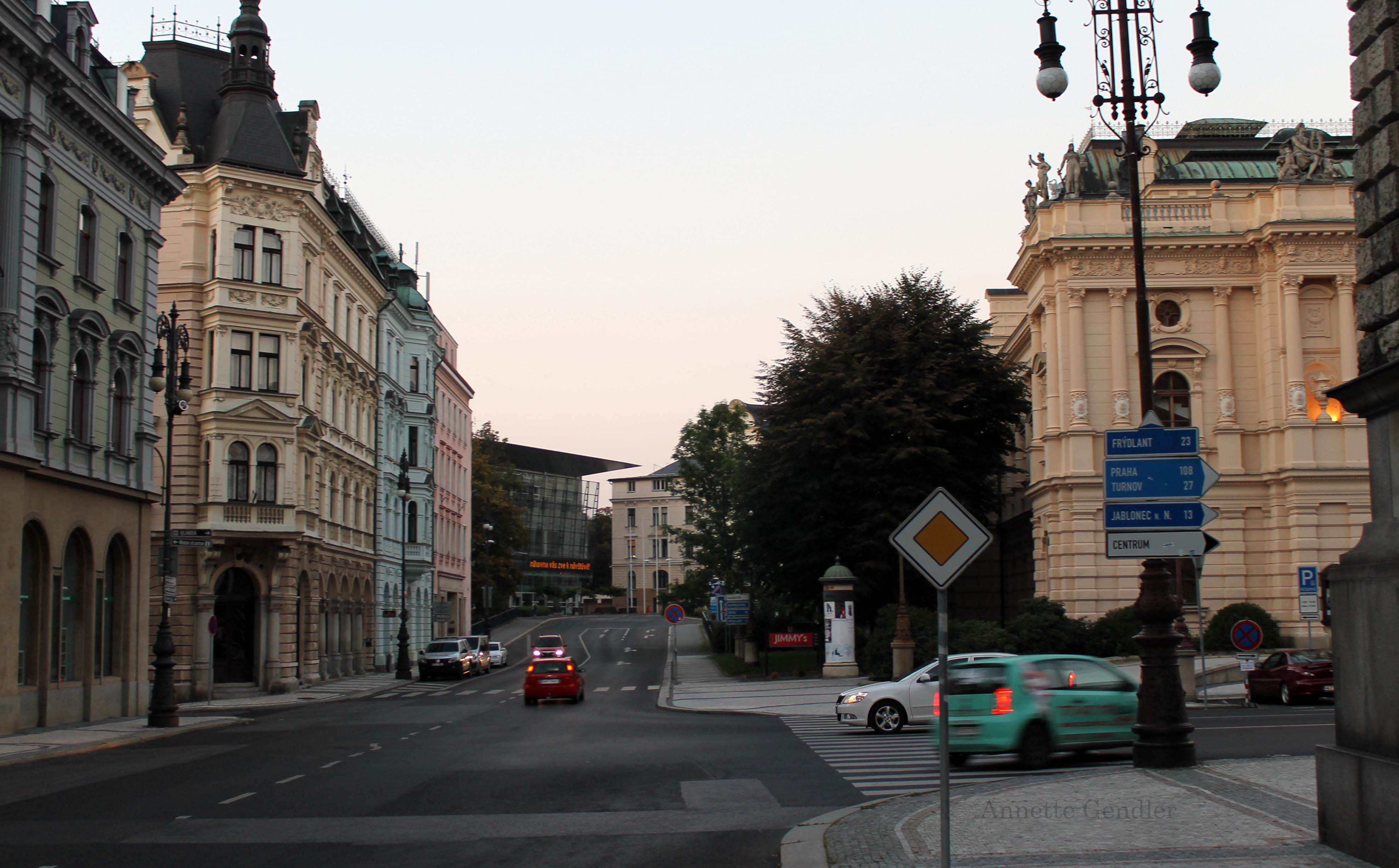 This is what that location looks like these days (I took this picture in September 2016). The entrance to the Café Post is still on the left, but sadly, it isn’t a café anymore; instead, the local police department now occupies its opulent premises. My grandfather, my great-uncle and their political compatriots used to while away Sunday mornings in that café. The regional public library was built on the site of the synagogue; you see its ultra modern glass and steel structure (with bright orange lettering on the marquee) at the end of the street. 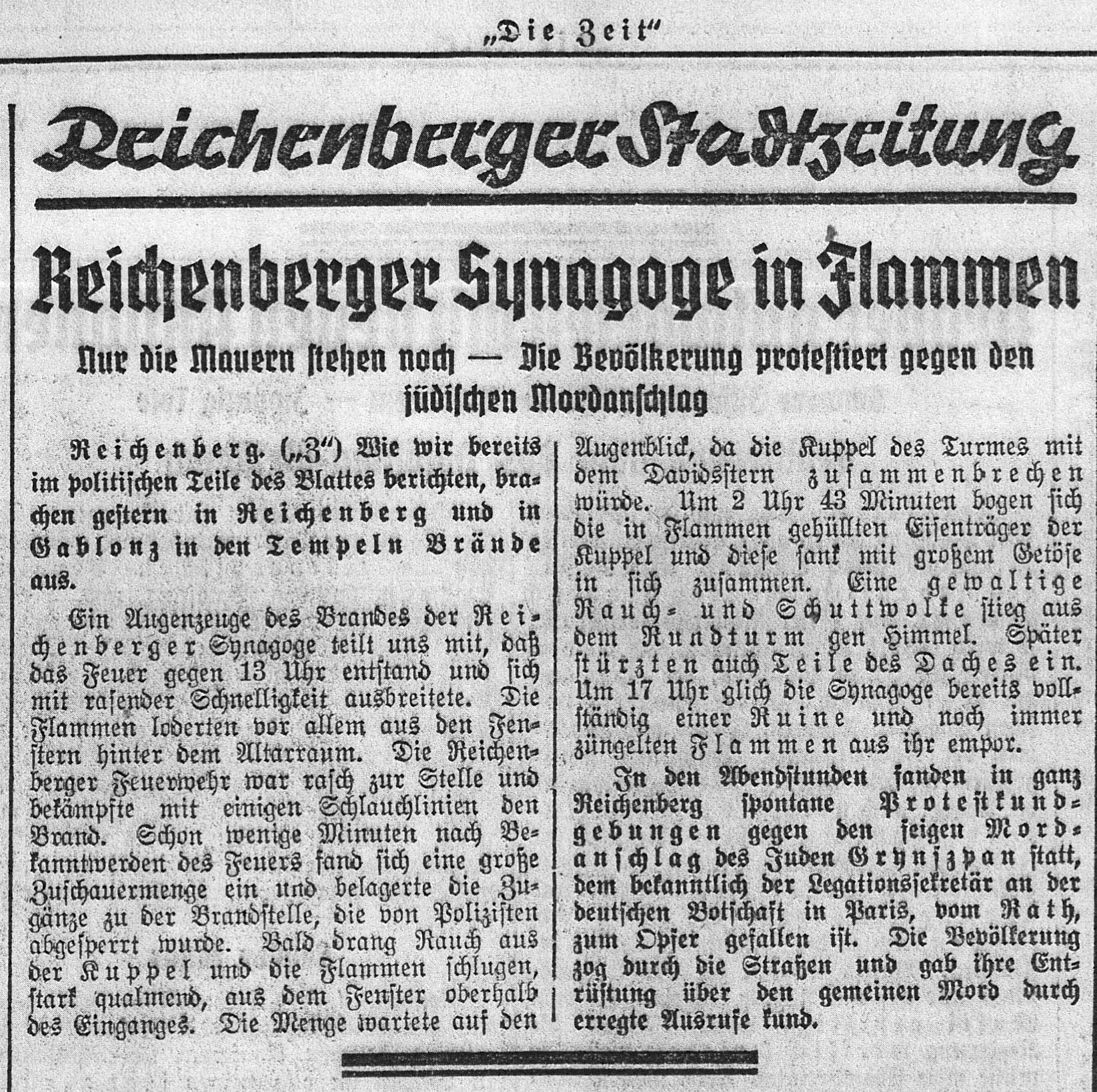 In the archives of this public library are where I found this article from November 11, 1938 that appeared in the Nazi organ “Die Zeit” (all media in this region of Czechoslovakia was by then under Nazi control). Its headline reads “Reichenberg’s Synagogue in Flames.” The subtitle says: “Only the walls are left standing. The population protested the Jewish assassination” (this refers to the pretext for the pogrom, namely the murder of the Nazi diplomat Ernst vom Rath by Herschel Grynszpan, a Jew living in Paris), and the whole article proceeds to report, in gleeful detail, how the “rightfully enraged” citizens of Reichenberg took revenge on the Jewish community by burning down its synagogue. 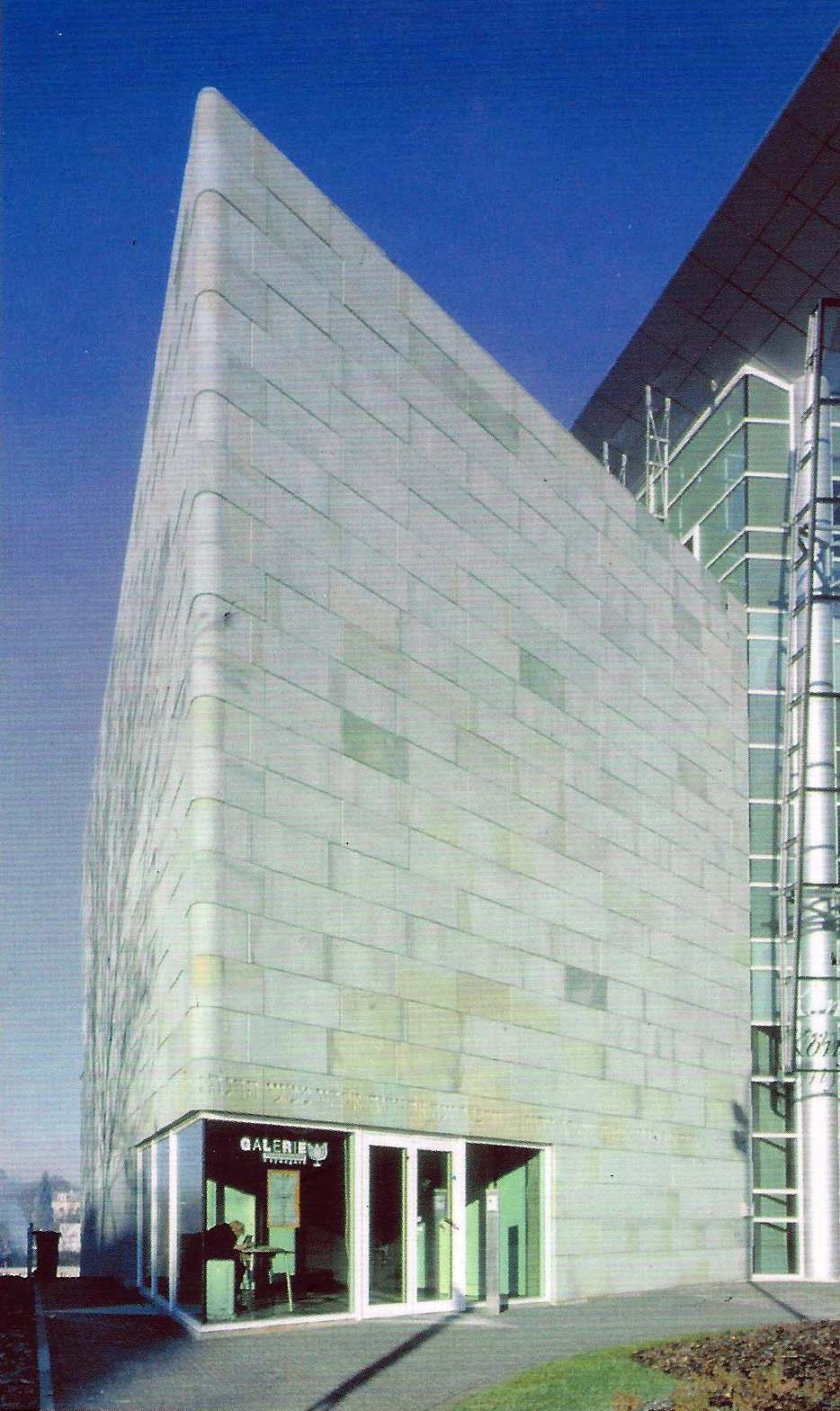 However, Liberec did honor the memory of its erstwhile Jewish house of worship, and a small Jewish community center is now attached to that modern library building. It is housed in the trapezoid-shaped annex that is part of the bluish modern structure of the library in the bottom half of the postcard in the first image of this post. A brochure I picked up in that community center features the angular structure on its cover, see above. A small triangular sanctuary is on the lower level, and according to the brochure, its shape is meant to resemble one part of the star of David. This new building was dedicated on the anniversary of Kristallnacht, on November 9, 2000. 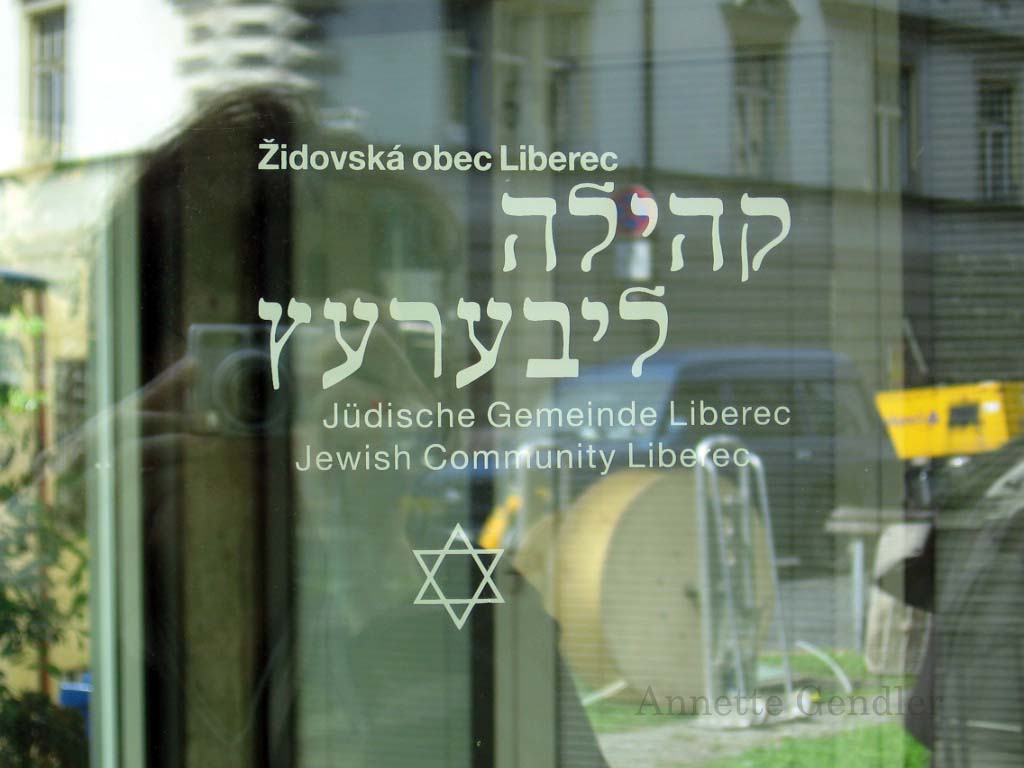 This is my reflection as I take a closer look at the glass facade of the Jewish community building in Liberec.

That the current synagogue in Liberec features a glass front is an eerie connection to my own life and to Kristallnacht because the Chicago Loop Synagogue, where my family and I are members, was vandalized earlier this year. It also has a glass street front, and one of its panels was smashed by a vandal, who also affixed swastika stickers to the doors. He was apprehended a few days later, thanks to having been caught by the cameras of adjacent bank buildings, and turned out to be mentally ill. 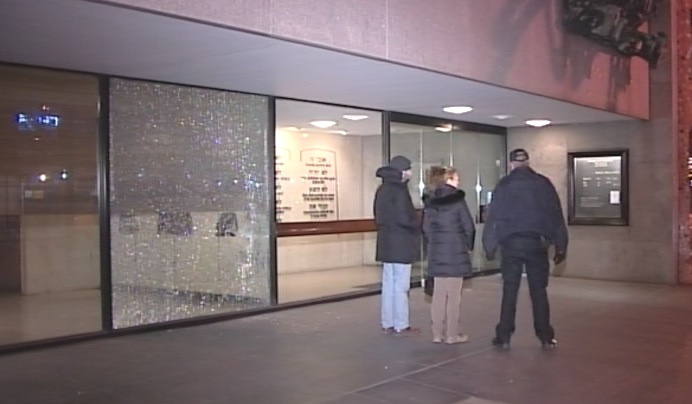 I wrote about the incident for Tablet Magazine, but not until the editor slapped on the title The Day of Broken Glass did I see the connection to Kristallnacht. Here was a direct thread to the past; the very thing I am always looking for in my writing! I don’t mean to say that the situation of Jews in America is anything like it was for the Jewish community of Liberec in 1938, or any Jewish community under the Nazis, but this experience of walking into the synagogue on Shabbat morning and finding a heap of glass glittering on the floor, next to a floor-to-ceiling window that had already been boarded up, was unsettling. It was a stark reminder that Antisemitism is an evil that will simply never die.