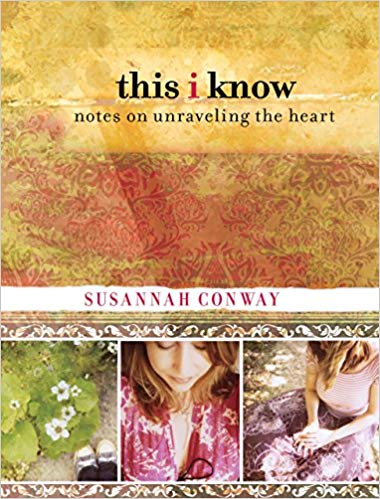 I just reread a book I had read in 2012 when it first came out: Susannah Conway’s This I Know. It is one of the few books I’ve gifted several times and I have recommended it often to friends going through grief and bereavement.

I found there is much to be learned from rereading. I initially leafed through it looking for a quote I associated with it, namely the assertion that even in the most dire circumstances, when you’re totally down and out, you will find that most moments are not that bad. You can make a list in your head of all the things that are OK at that point in time. There’s a roof over your head, heat in your room, a soft blanket, etc. I’ll elaborate on that when I do find the quote because it turns out that it wasn’t in this book. Nevertheless, I ended up reading the whole book again because I got hooked, and I found that in my current struggle with recovering from surgery, this book had something to offer.

And this is one thing that distinguishes books we reread from others: Again, and again, they enrich our lives. It got me thinking about which books I reread, and which I don’t. To begin with, there are few books I reread. (There is, after all, always a big pile of to-be-read books waiting.) In my case they tend to be books I first read because I hoped they’d help me with a certain problem (which they did), or they are simply favorites, in my case usually mysteries where I continue to delight in certain plot points or characters that have entered my family’s lingo (such as Sherlock Holmes’ dictum not to put stuff into your head that’s not relevant for your line of work.) They are comfortable, cozy books. Then there are memoirs with plot lines I retell, or passages I’ll read out loud to my kids, my husband or friends. They live on in my consciousness, such as Frank McCourt’s Angela’s Ashes.

All that made me ask myself, what are the different categories of books I have in my shelves in terms of my interaction with them?

Rereading this particular book was also interesting as I got to meet my former self in my annotations. It was intriguing to see which pages I had dog-eared, which sentences I had underlined, and in a few instances I had even scribbled in comments. Since this is a memoir with a creative how-to-find-yourself bent, what I had underlined showed me where I was on my journey.

The beauty of it is, I now found new passages compelling that I underlined, such as:

“Looking after ourselves requires such vigilance, such commitment.” (p. 113)

Indeed, that’s my current struggle!  Maybe I should put “2018” next to my new markings so that I can distinguish when I left which marking? Hmm, that makes a reread book a mini-autobiography, doesn’t it?

Let me know what books you reread (if you do?), and if you’re ever interested in my book recommendations, sign up for my monthly newsletter, which once in a while takes on the form of a reading list.