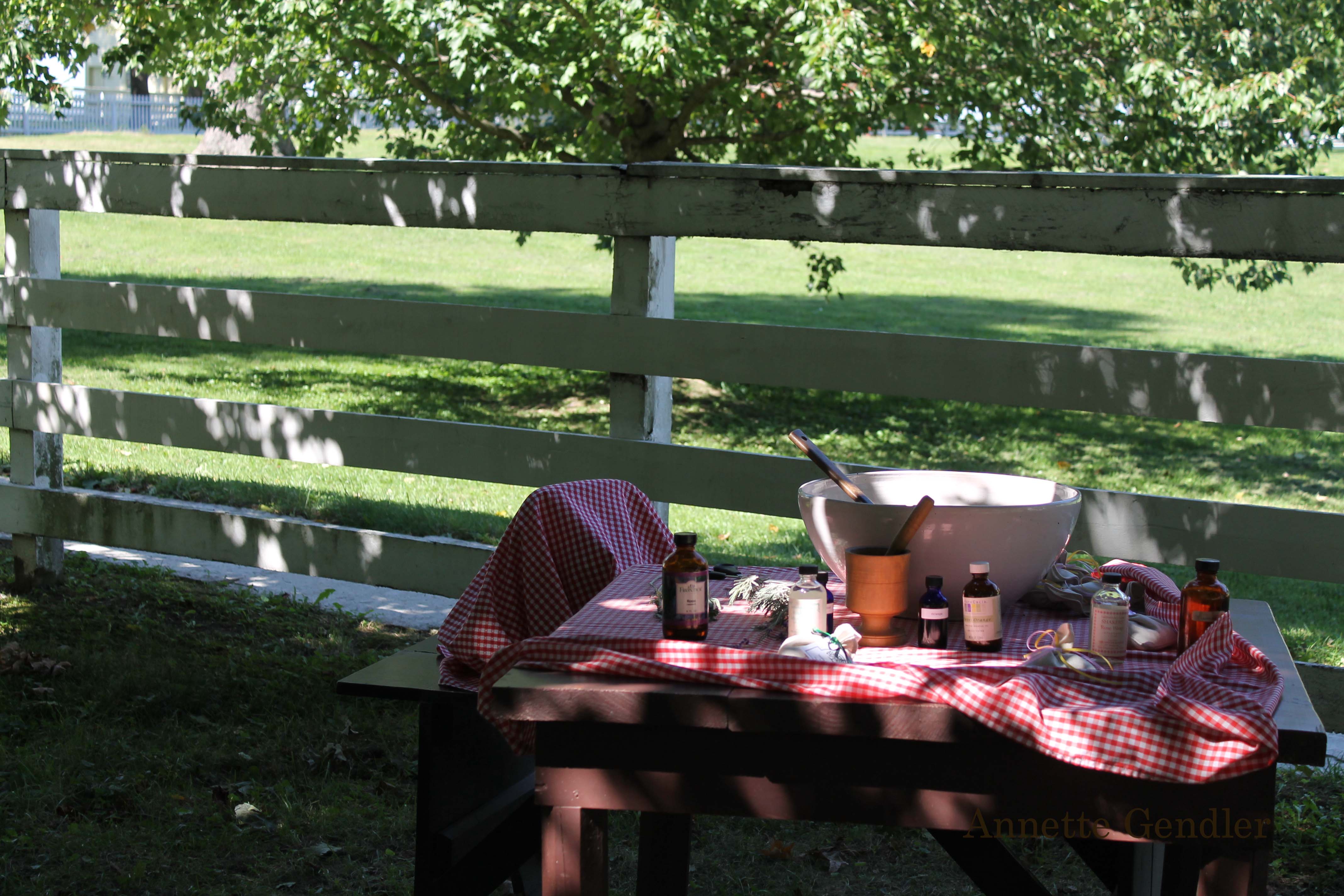 [you] remember feeling joyfully bound to the whole earth or even universe — [those moments] are most likely to be associated with being alone, and often alone outside.”

found on p. 109 under “Explore Reverie” in How to Be Alone by Sara Maitland

How true, how true. I stumbled across this observation recently reading Sara Maitland’s How to Be Alone. This book was indeed more of a “how to” on exactly what it promises rather than the memoir I expected extolling the virtues of the author living by herself in Scotland’s Highlands. It was an easy and at times thought-provoking read, but since I usually look upon solitude as a rare island in time to be cherished rather than something to be feared, as the author assumes most of her readers do, I didn’t need to be convinced.

Nevertheless, a good book gets you thinking. The above observation had me reminiscing about several glorious days spent outside by myself, usually exploring a new locale. Then, going through my submission files, I found this old photo essay of mine about exactly such a day six years ago, and so I thought I’d share that and spread some reverie.

Recipe for a Perfect Day in Solitude

Half a tank of gas

One purse with water bottle, wallet, lip balm and tissues

One serene destination, such as Shaker Village, Kentucky

First of all, don’t tell anyone at the writers’ conference you are attending where you’re going, because you need to go alone. Call your husband at home to inform him of your plans, just in case. Be thankful he’s at home with the kids and you aren’t. 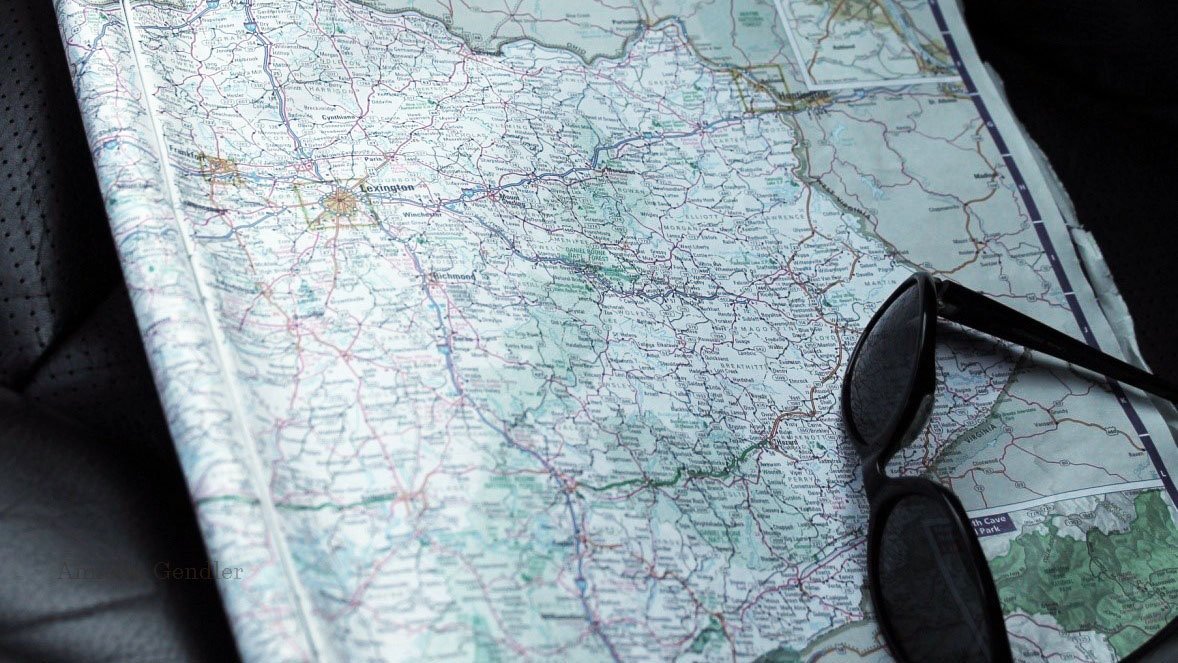 Position the atlas on the passenger seat of the rental car, so you can glance at it now and then. Memorize the number of the next road you have to turn on. [This was written before GPS was a thing.] Head out of Lexington, Kentucky, taking Route 68 to Shaker Village. 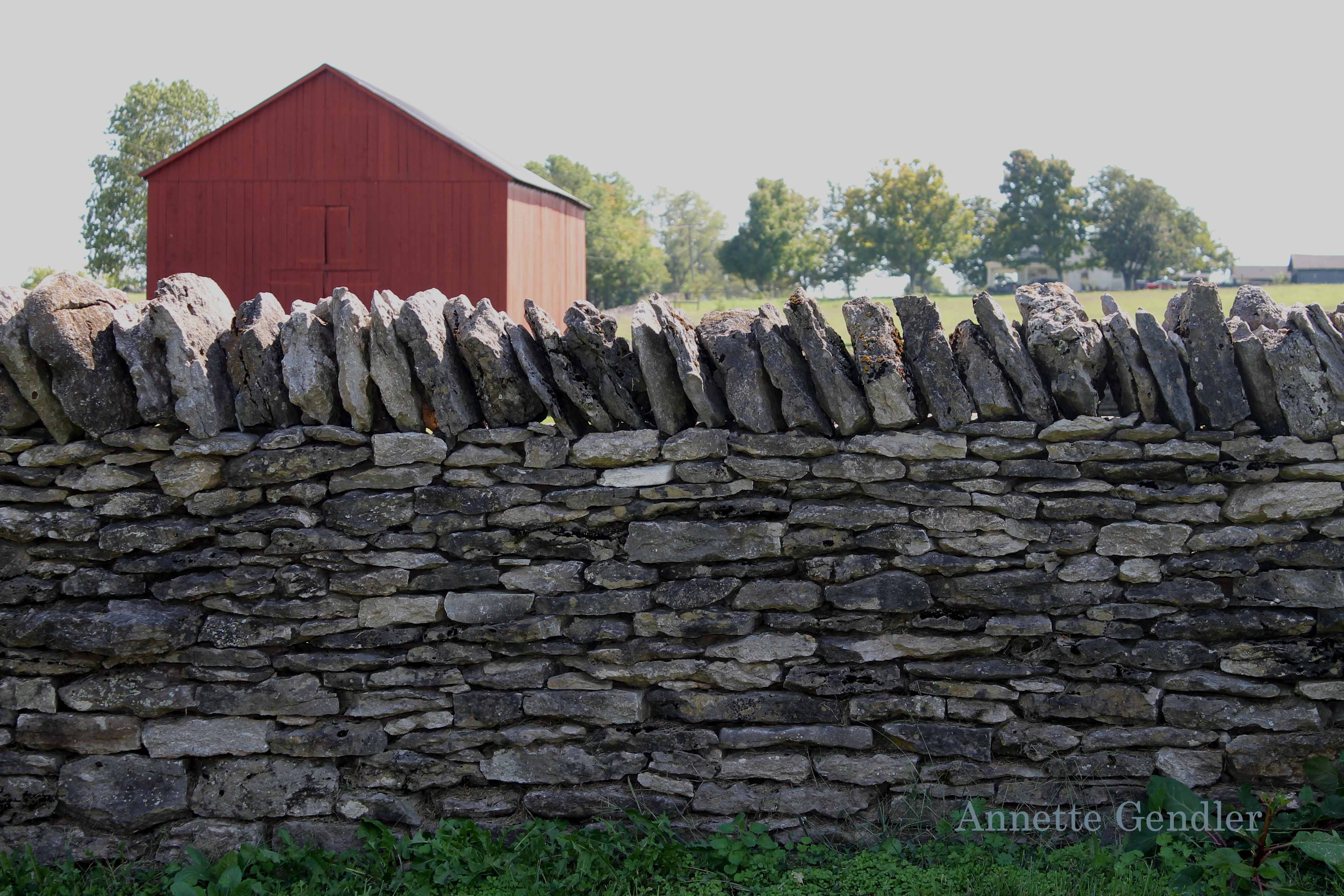 Marvel at the limestone cliffs as you drive through the Kentucky River Valley. Delight in the dappled sunlight filtering through the trees. Hug the curves. Emerge from the valley and be stunned by the dry stone walls lining the road. Watch the signs and turn right off Route 68 into the parking lot of Shaker Village. Park under a tree. Strap on camera, grab purse, and smile to yourself. 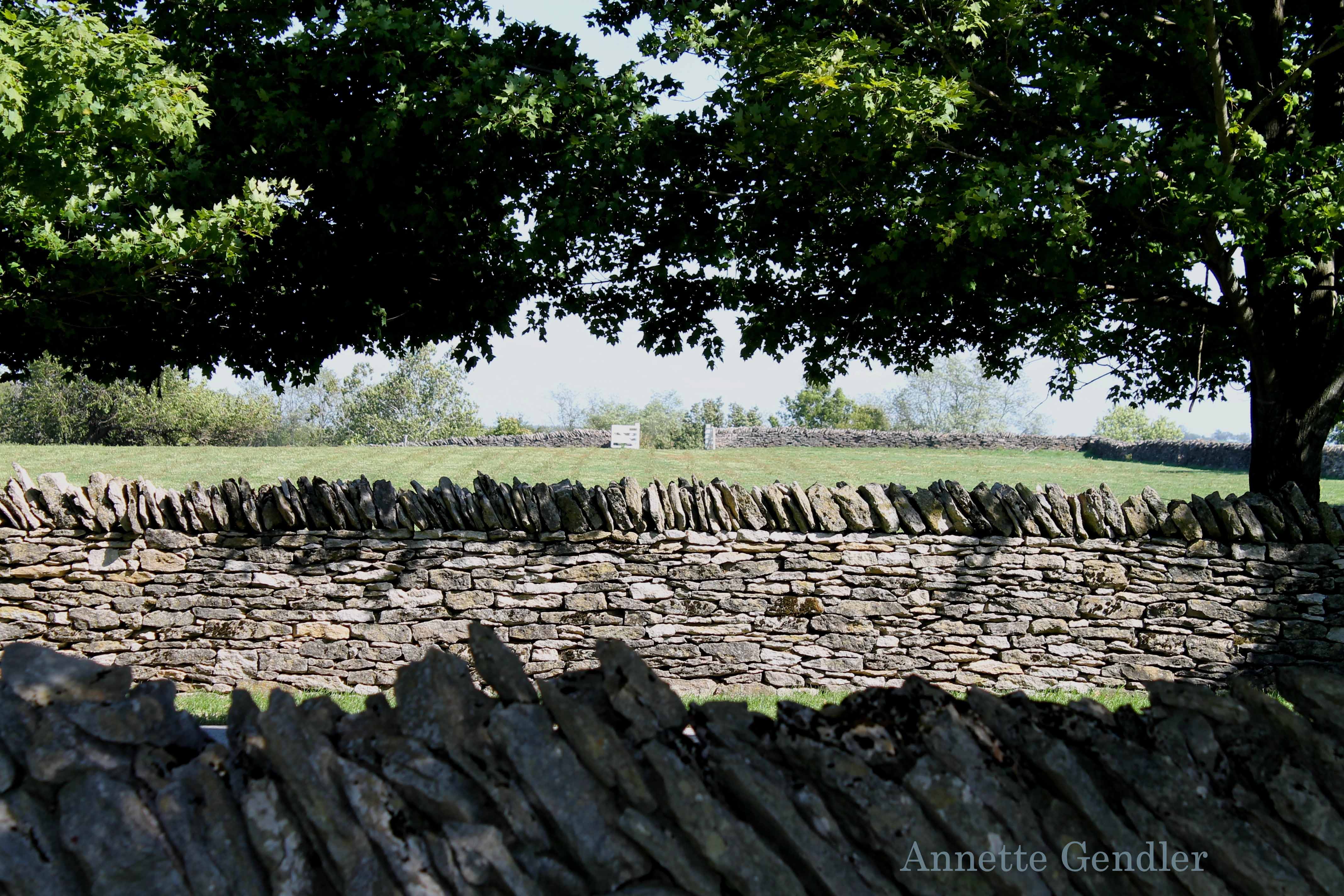 Inspect the dry stone walls encasing the parking lot; they are indeed like the ones you’ve seen in Ireland. Be charmed already. Stop at the visitor’s center, which is also a large but tasteful gift shop. Be enamored with all the Shaker wares, note what you could buy, but buy nothing. You don’t want to be schlepping. 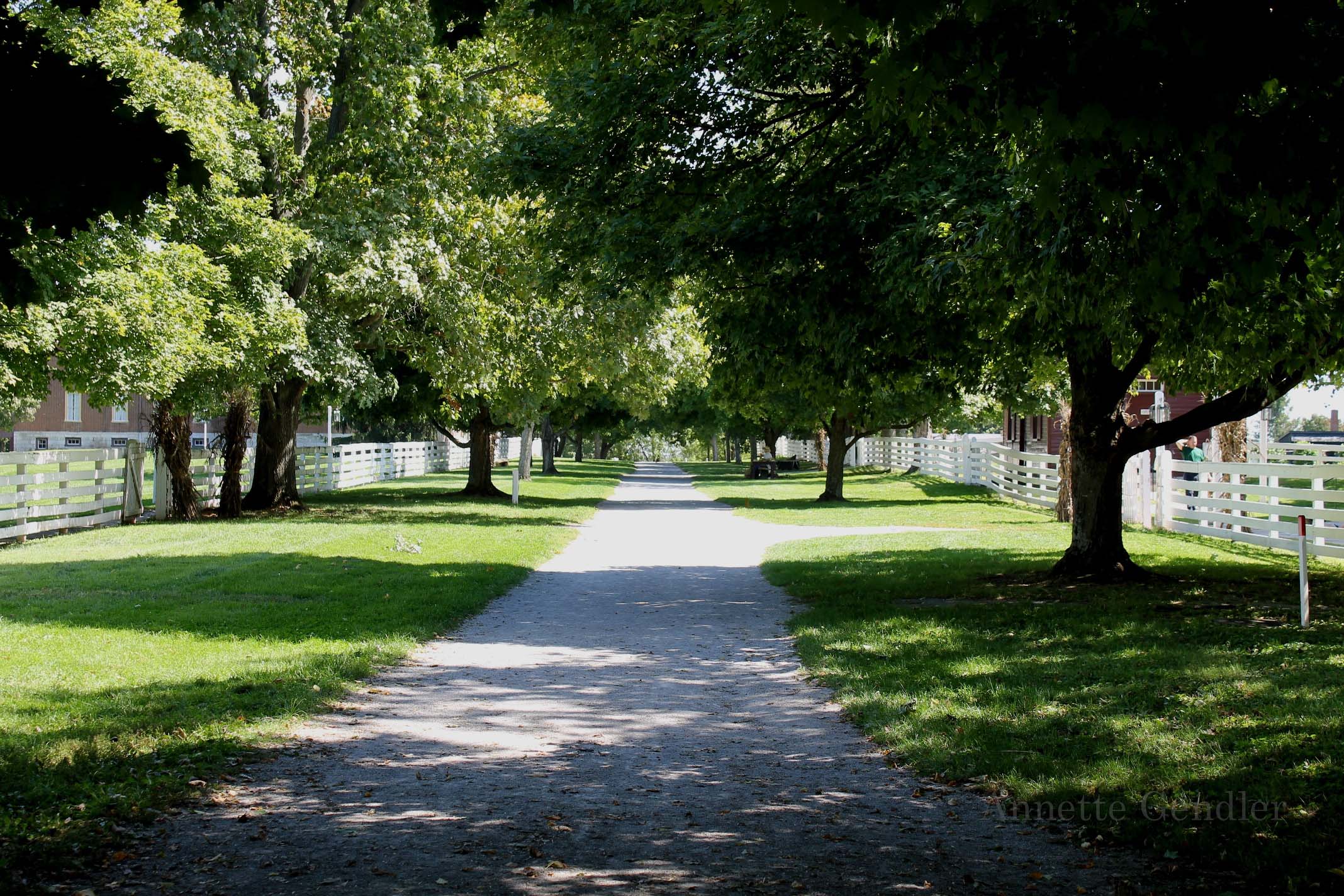 Wander beyond the gift store, along the gravel path that is the Main Street of Shaker Village. Delight in the picket fences, the white clapboard houses, the symmetry of their long narrow windows, the green grass, the hum of a mower, and the swoosh of the wind in the trees.

Listen to a demonstration on herb medicine by a woman wearing a white cap. Rub lavender between your hands, sniff its dreamy aroma. 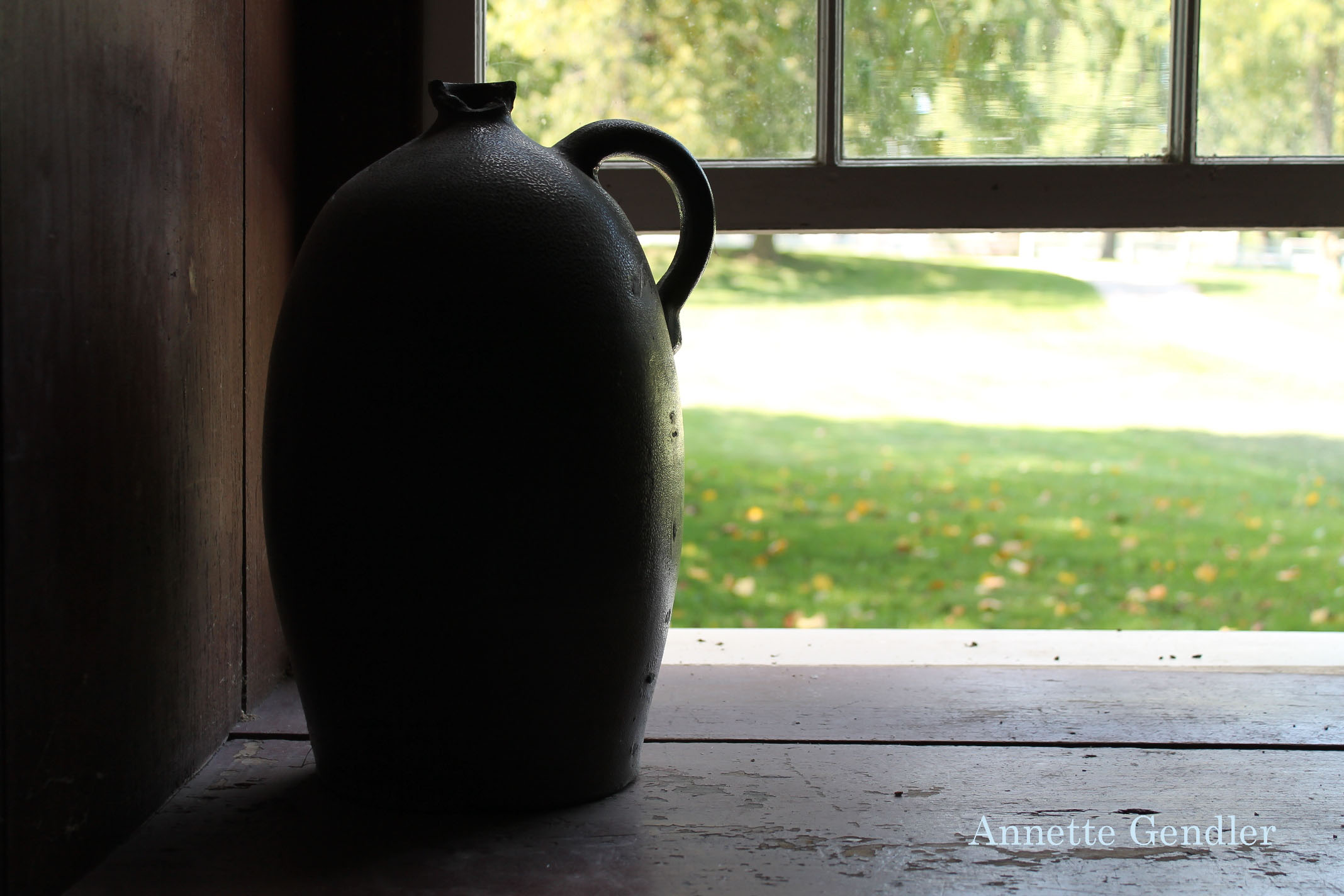 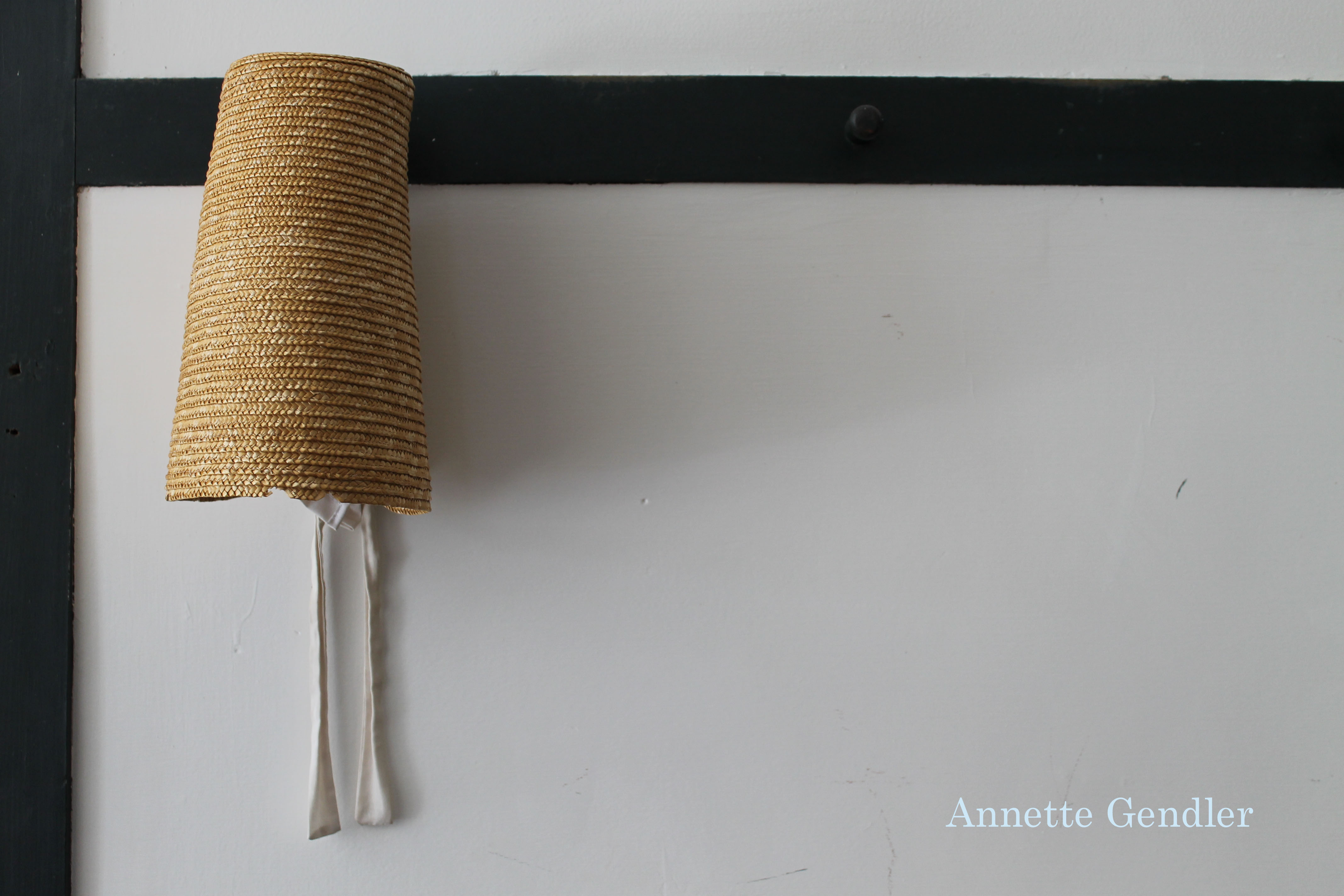 Take lots of photos. Snap a sole bonnet on a peg board or an earthen jug on a window sill. Catch a gauzy curtain’s billow in the breeze. 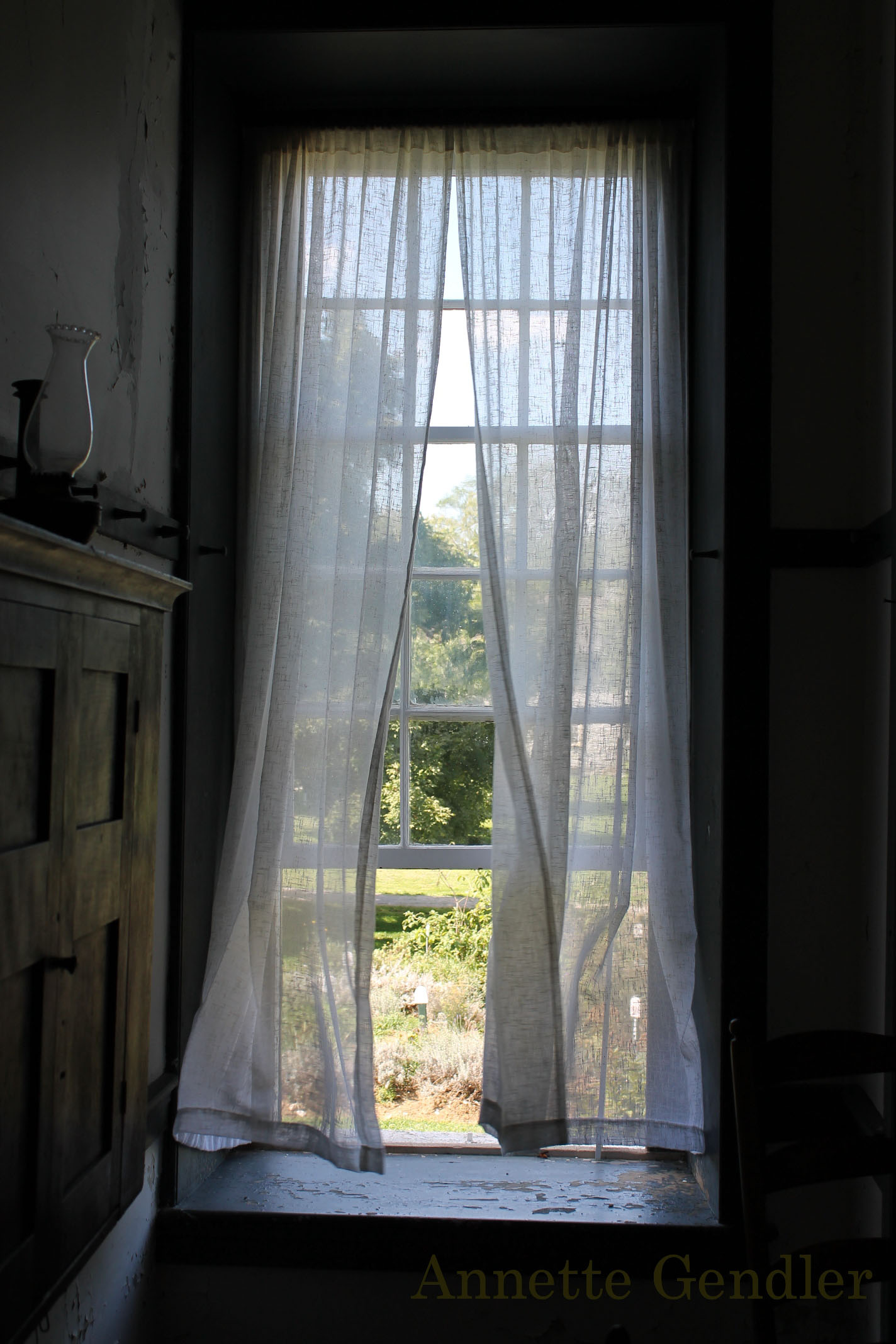 When you get hungry, stop at the little general store and buy lemonade and a power bar. Keep walking along Main Street. 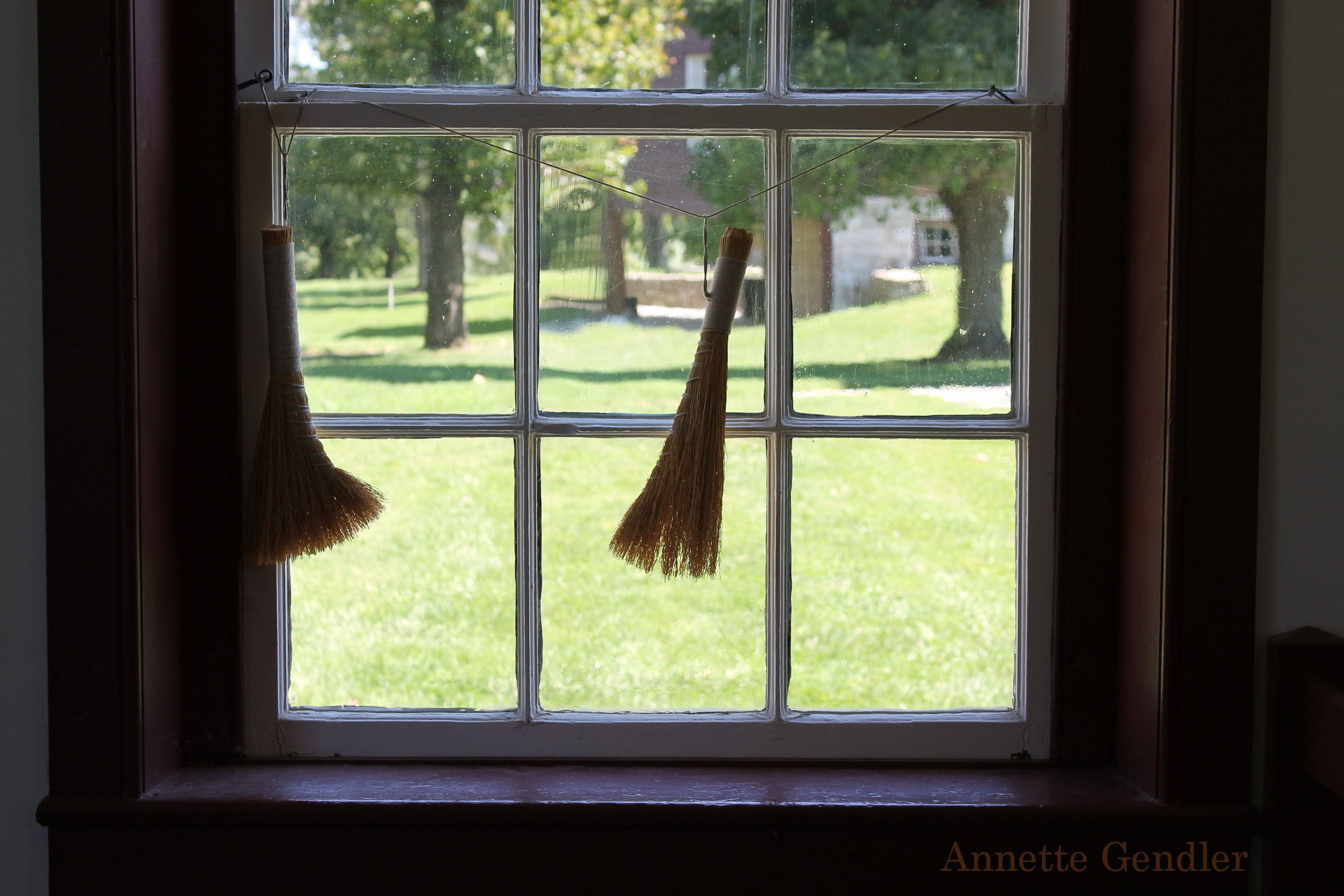 Listen to an ancient broom maker’s yarn and be amazed that his broom stands up by itself wherever you leave it. Be tempted to buy one, but don’t. Wander on. 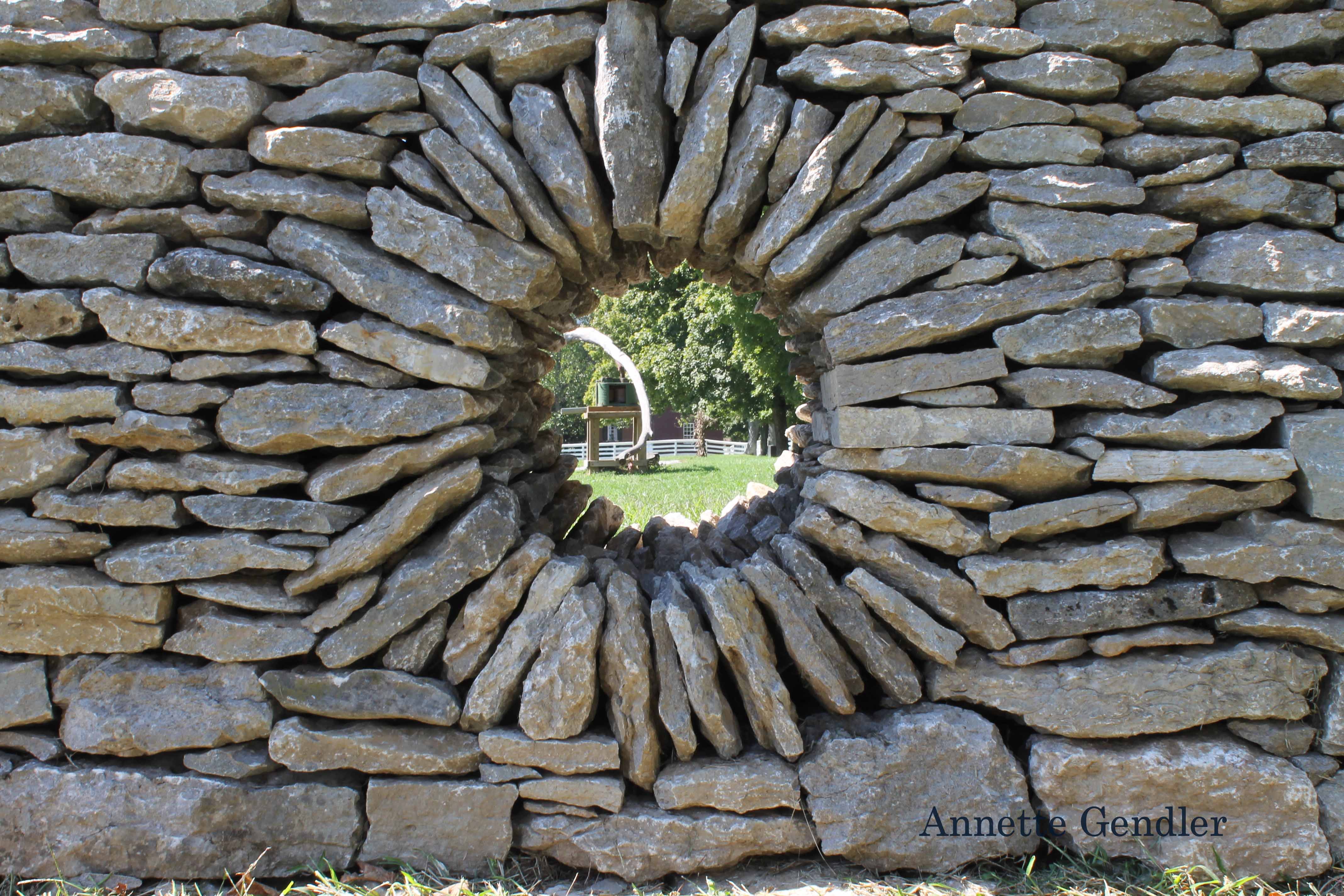 Lie in the grass to photograph a hole in a dry stone wall.

Almost hit your head on a low beam entering the little museum with its cold stone walls. Watch an educational video about the Shakers. 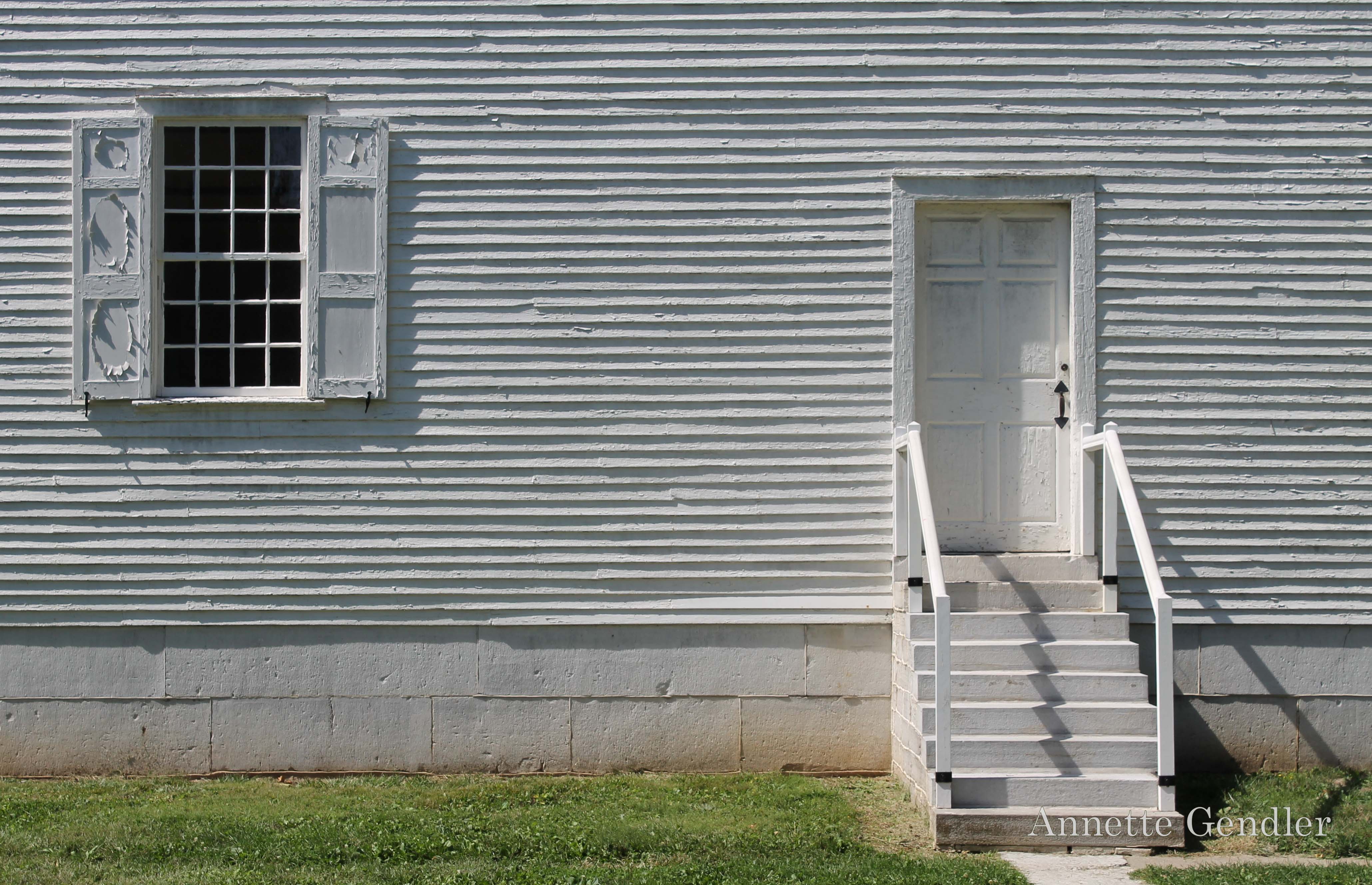 Get lost in the detail you see through the camera’s lens – the peeling paint on a white clapboard, the spider’s web between the jug and the shelf, the bits of straw on the broom maker’s floor.

Serve the perfect day that evening. Take it out of the camera and savor the images on your laptop. Send the one of the bonnet and the one of the barn beyond the dry stone wall to a photo site where it will be featured in a weekending column.

This recipe will serve many.