A Vintage Children’s Book Illuminates a Visit to Plymouth Plantation 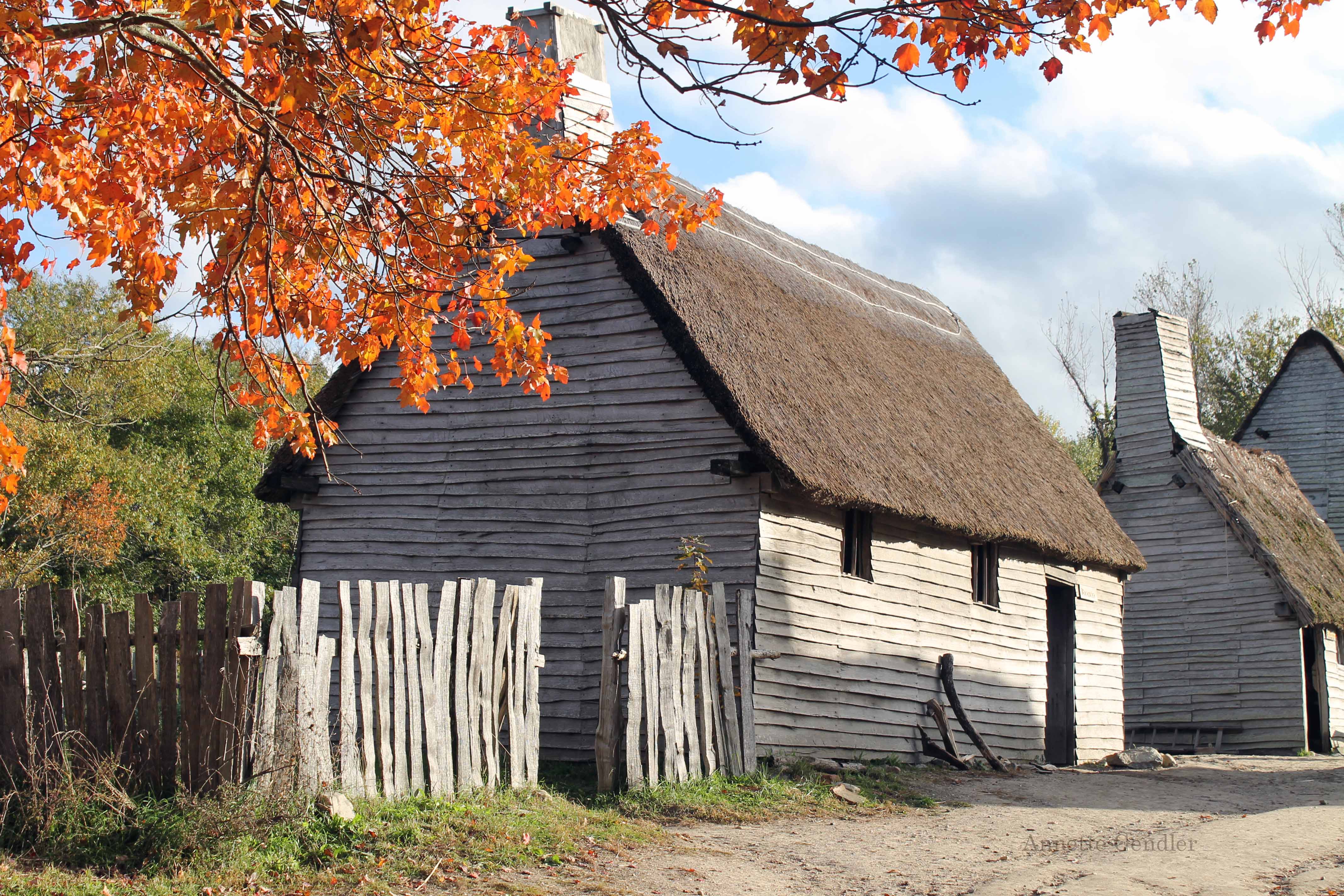 On our recent trip to Boston, we visited Plimouth Plantation.

As often happens when traveling, you go out to see one thing and discover another.

Plimouth Plantation hadn’t been the main destination that day, a cranberry farm had been. But since it was on the way, we stopped by on our drive back. Turns out the historical village was the more interesting attraction. It recreates the settlement of the Plymouth Colony established in 1620 by the Pilgrims, English colonists who came to the new world in search of religious freedom.

By the way, the irritating spelling of Plimouth with an “i” was used by Governor William Bradford in his history Of Plymouth Plantation. This spelling is meant to differentiate the museum from the town of Plymouth. In the 17th century there were no spelling rules, and so you will find different spellings of the same words in texts from that time, often within the same document.

Even though I had never been there before, Plimouth Plantation seemed pleasantly familiar.

I realized that was due to a children’s book about the Pilgrims that I always loved. It was one of the few English books I had growing up in Germany. I don’t know how I got it but I do remember reading it with my mom. 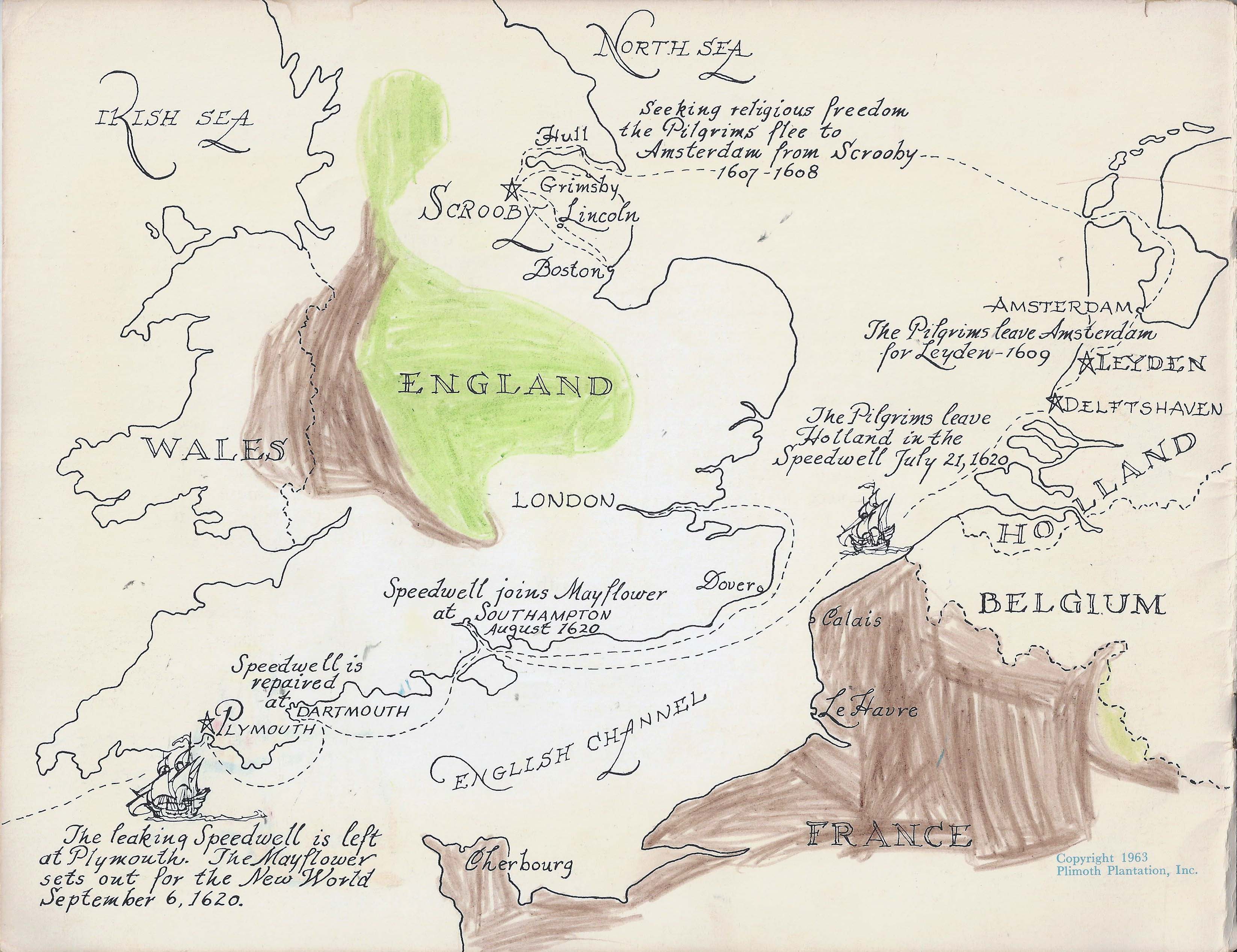 as this map does that I never finished coloring in. In the page’s lower right corner is the copyright of Plimouth Plantation. As a kid I sat so intently with this book and a bunch of colored pencils, trying to do it justice. No wonder I felt I knew the place! 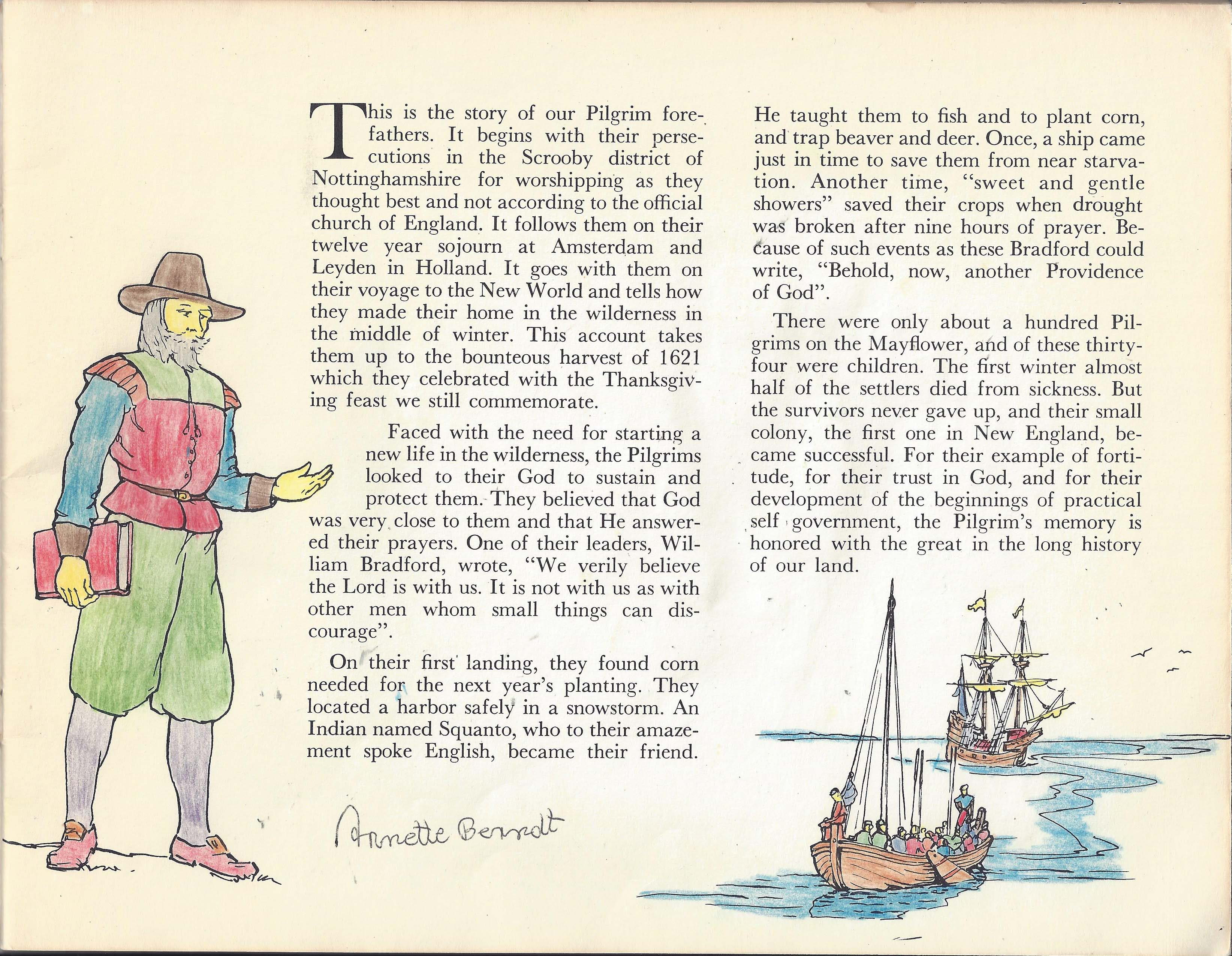 The second page features my name in my handwriting from about age 10. We also had a related cross-stitch needlepoint pattern depicting Pilgrims in their traditional garb. It could be that my dad bought both on one of his business trips to the U.S.. Perhaps he even visited Plimouth Plantation?

To this day I feel guilty about not having finished coloring the book.

Whenever I contemplate actually picking up colored pencils to finish the job, even now, the task strikes me as daunting. Each panel in the book is quite an intricate job. The needlepoint project suffered the same fate and is long lost. But thankfully, I still have the book. 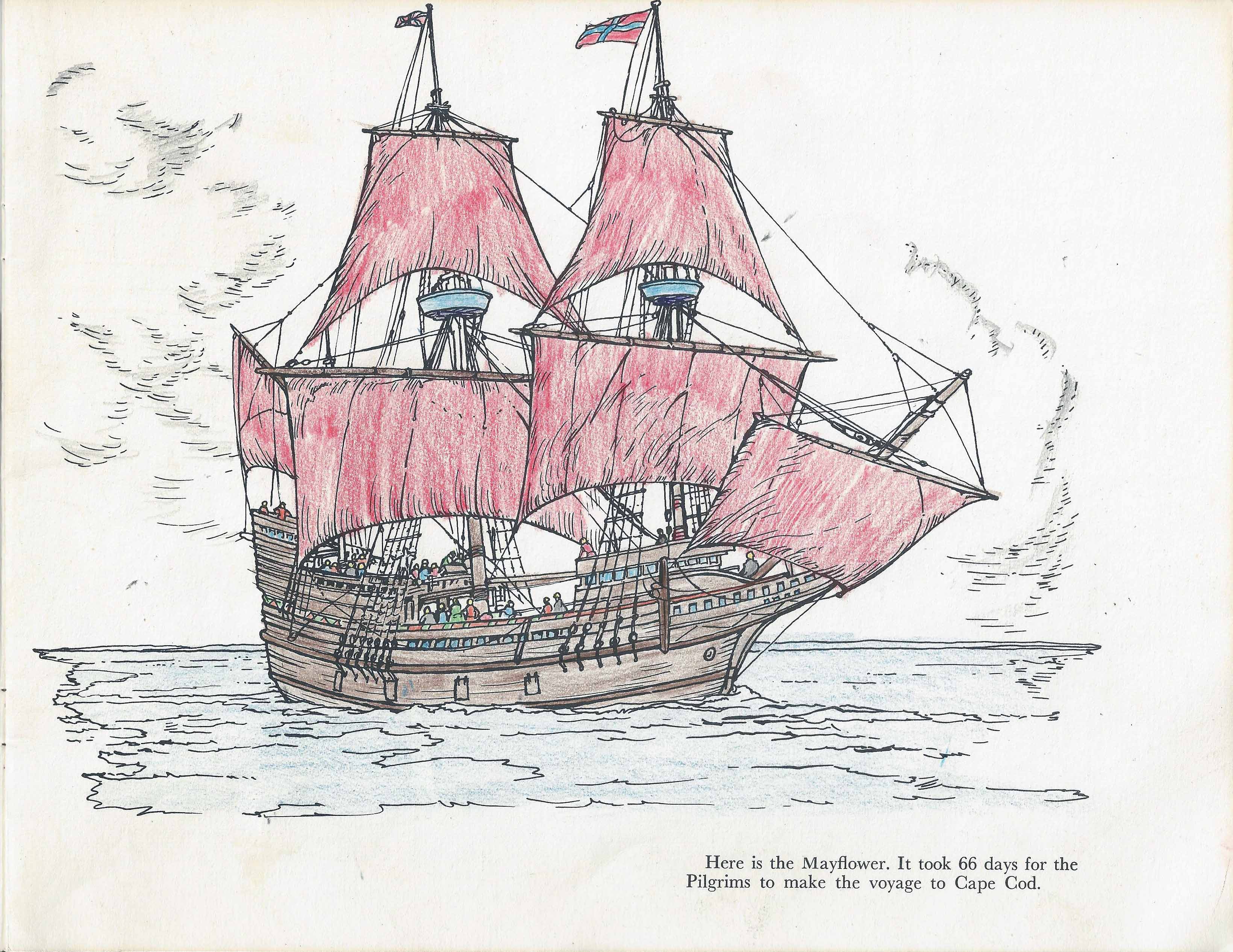 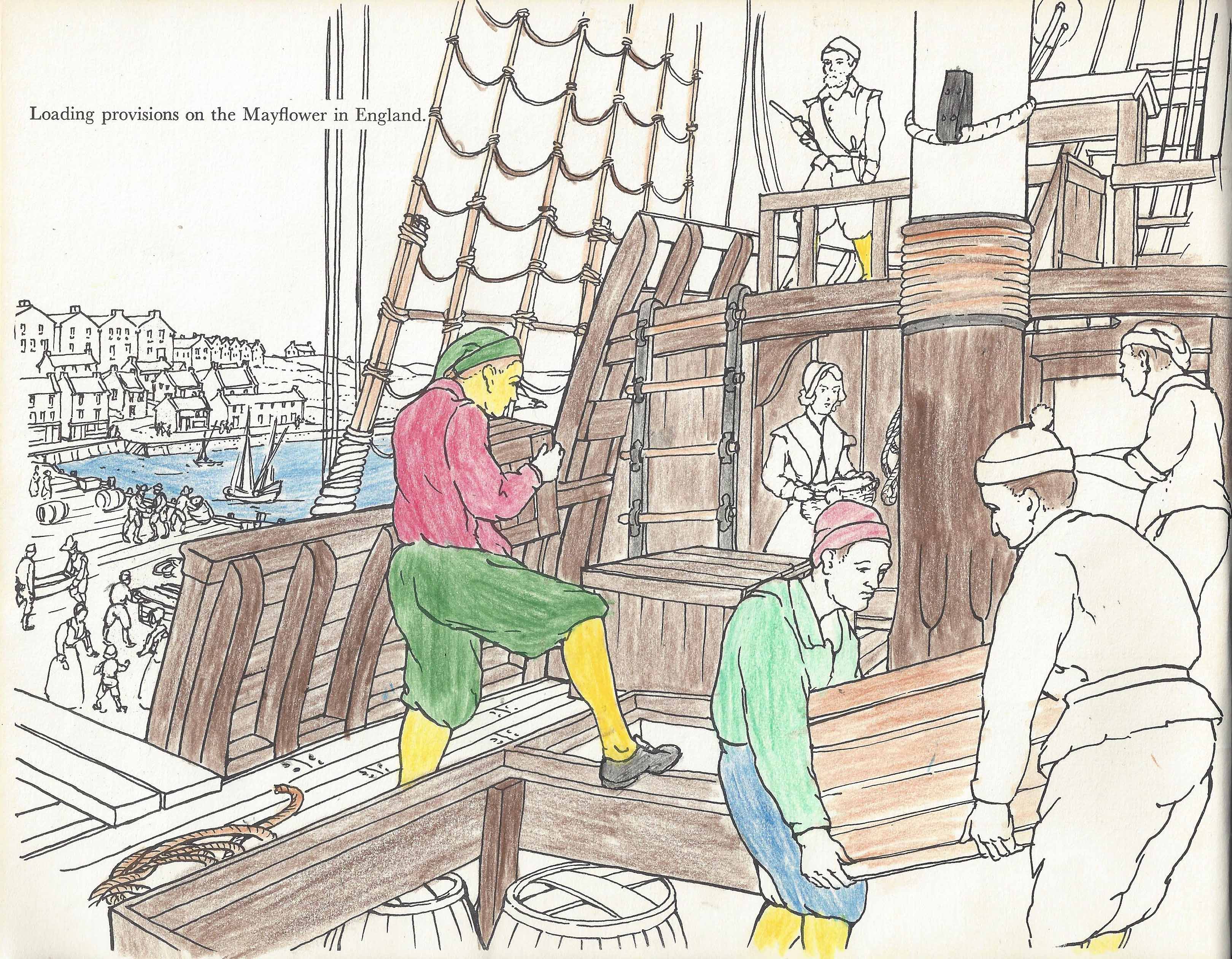 Thanks to this book, the story of the Mayflower, the Pilgrims, and the first Thanksgiving was intimately familiar to me even though I was growing up in Germany.

For my American mother, it must have been important to give us kids some background on Thanksgiving. This was in the 1970s when she used to drive around the local farms, asking for a turkey, which wasn’t common food in Germany back then. Incidentally, she did the same trying to obtain a pumpkin for a Halloween jack o’lantern. That grinning, glowing orange globe in our living room window must have struck our neighbors as a fun but decidedly odd custom. These days, my niece and nephews in Germany go trick-or-treating themselves!

It was lovely to see the actual bay of Cape Cod where the Pilgrims landed, and to match my visceral recollection of their dwellings with the “real thing.” Here I could even to step inside these thatched roof houses, where historical village dwellers explained some of the history, or what they were doing with the harvest. 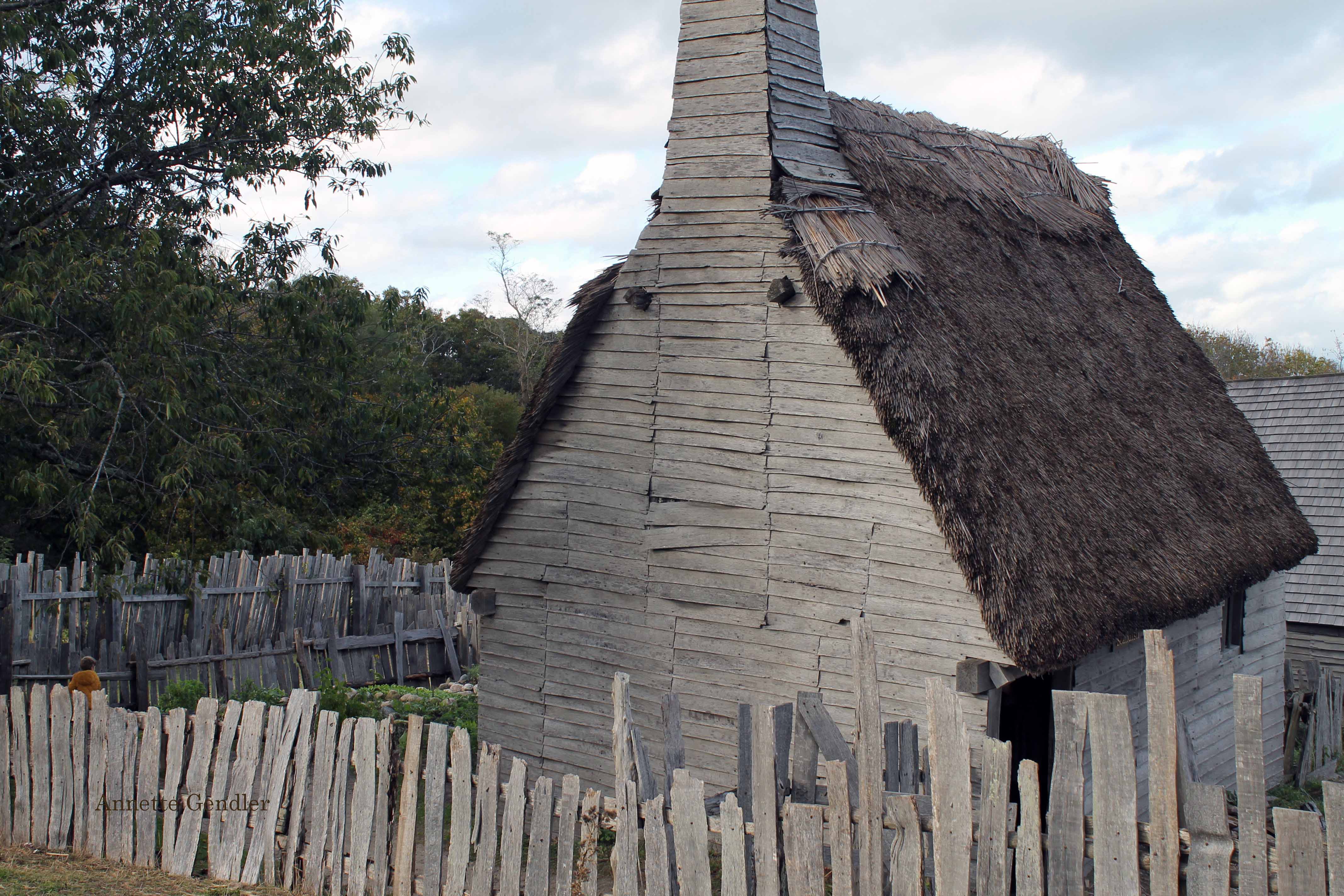 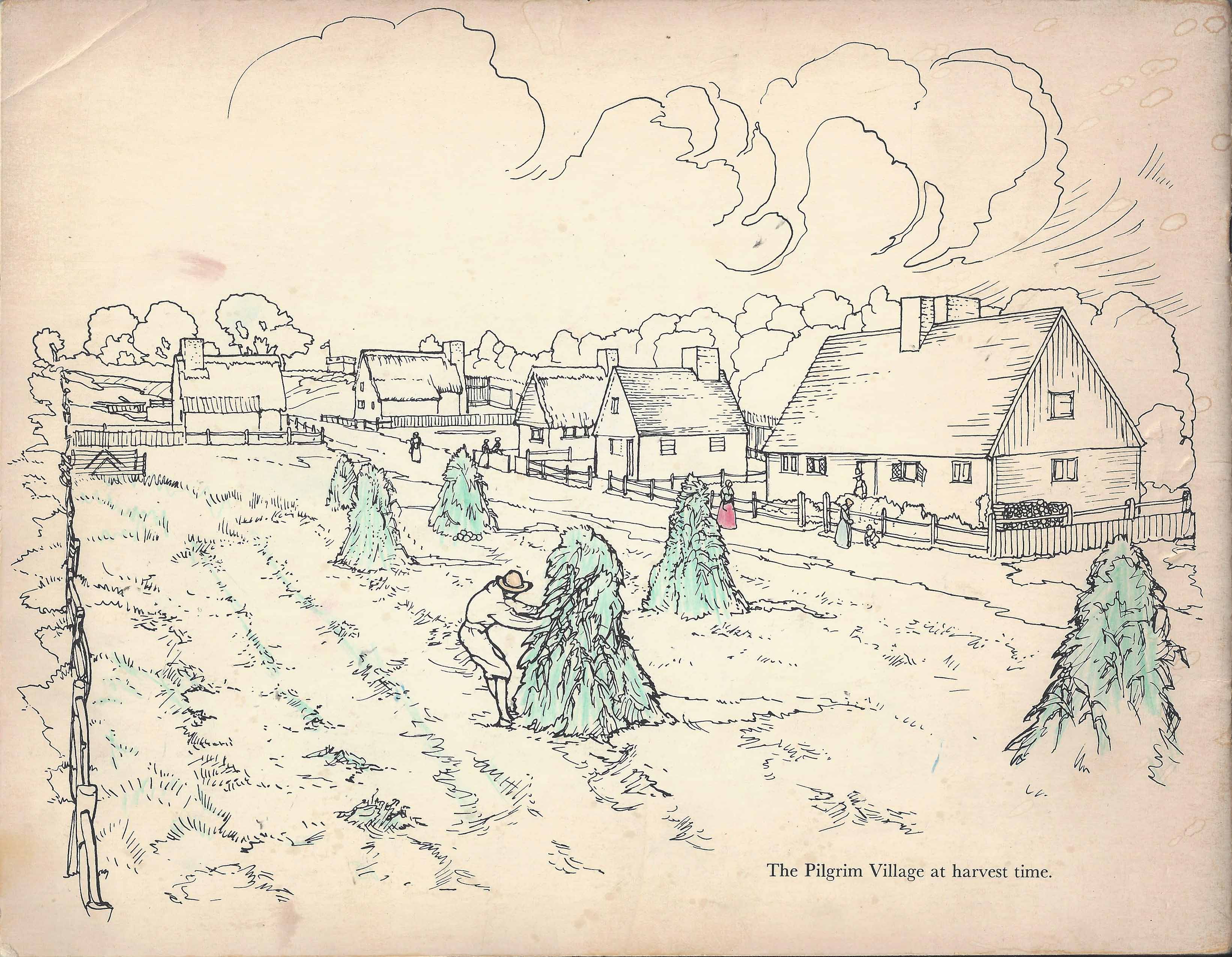 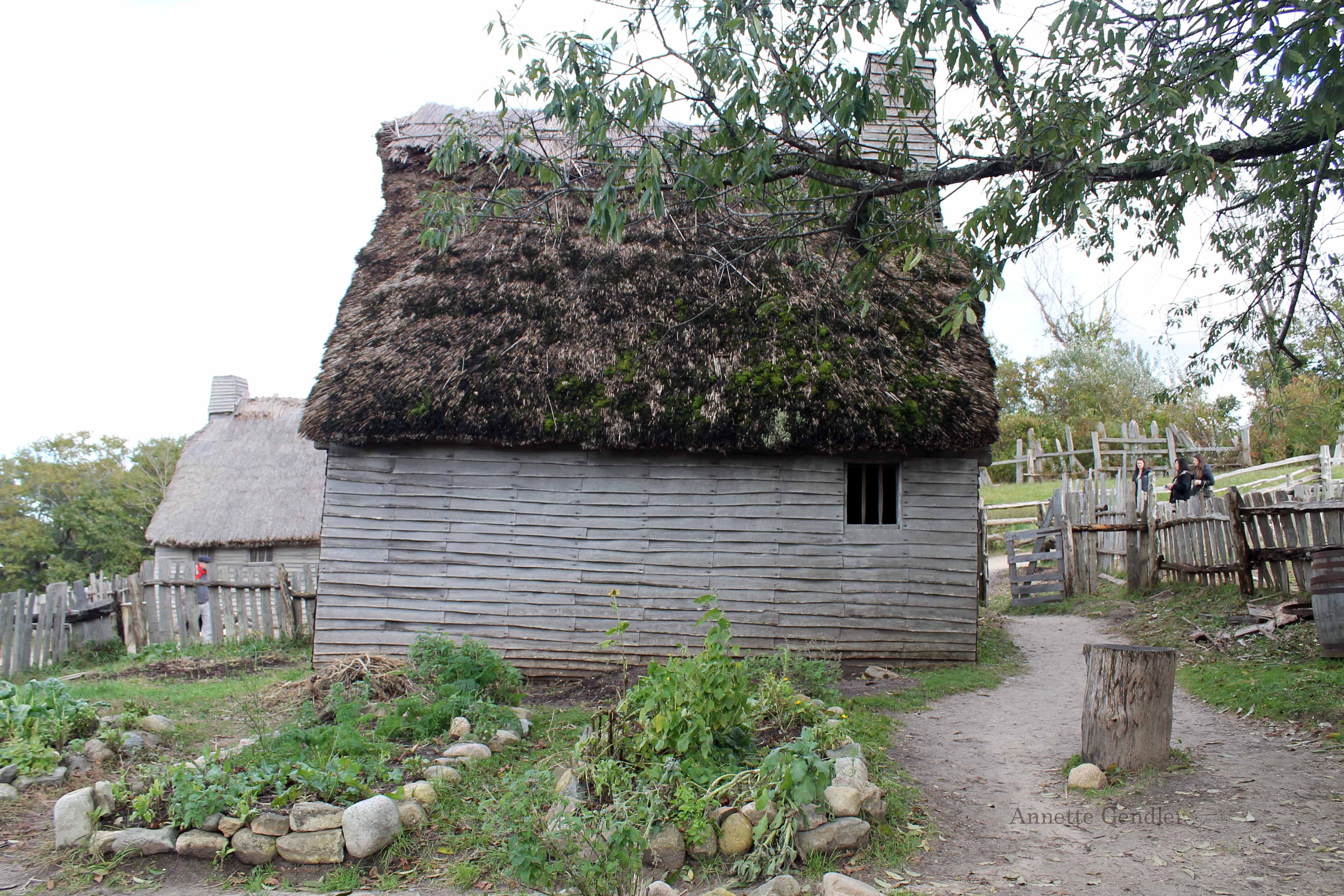 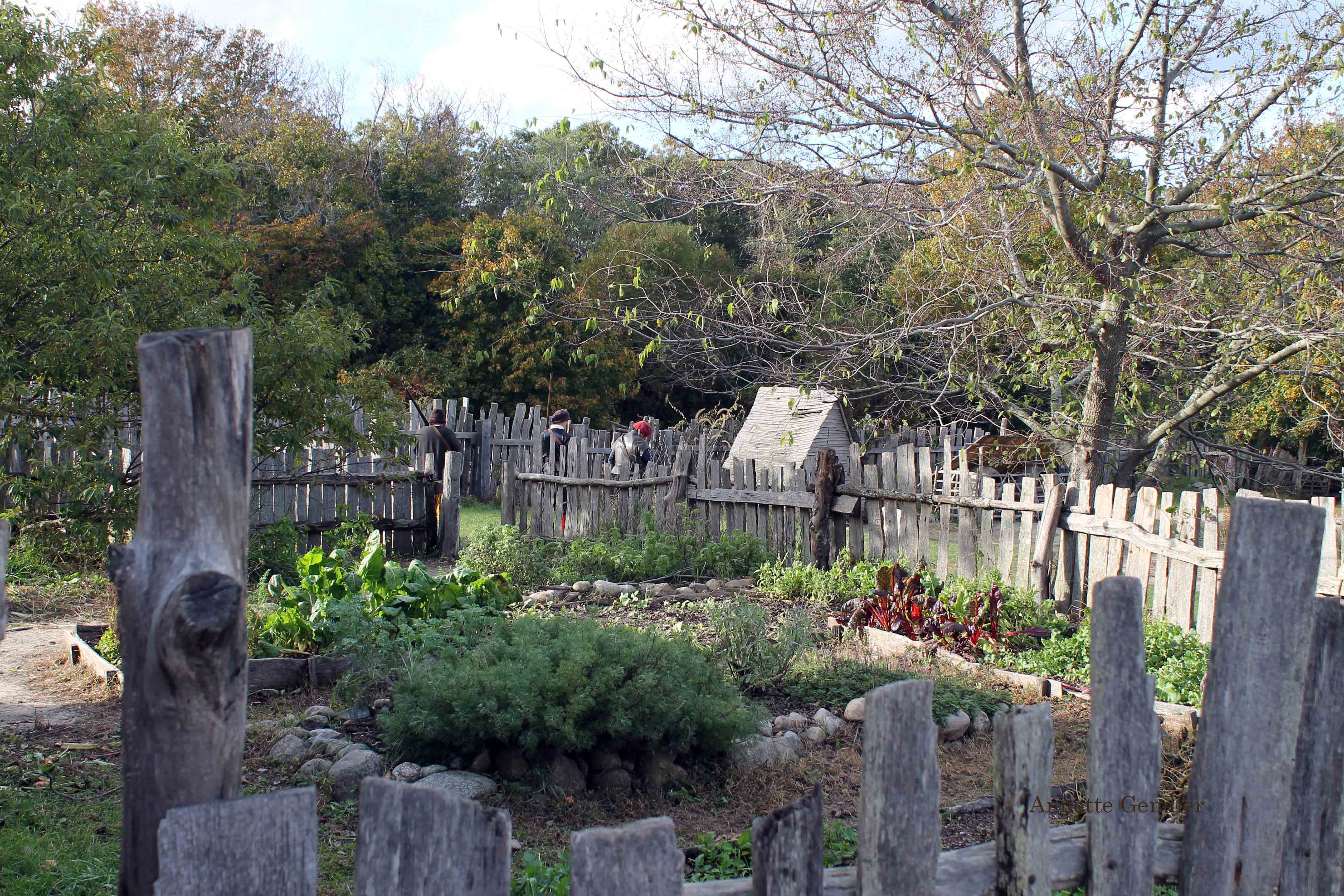 I marveled at what it must have taken for the Pilgrims to establish themselves and survive.

Particularly since they arrived on the shores of Massachusetts in early November, about the same time of year we were visiting. And we were already bundling up in our coats against the nippy wind. Just building those houses struck me as a huge task, given that I know what it takes to fell and saw up a tree with power tools, which they did not have. We also learned that they first settled in village that had been abandoned by Native Americans. 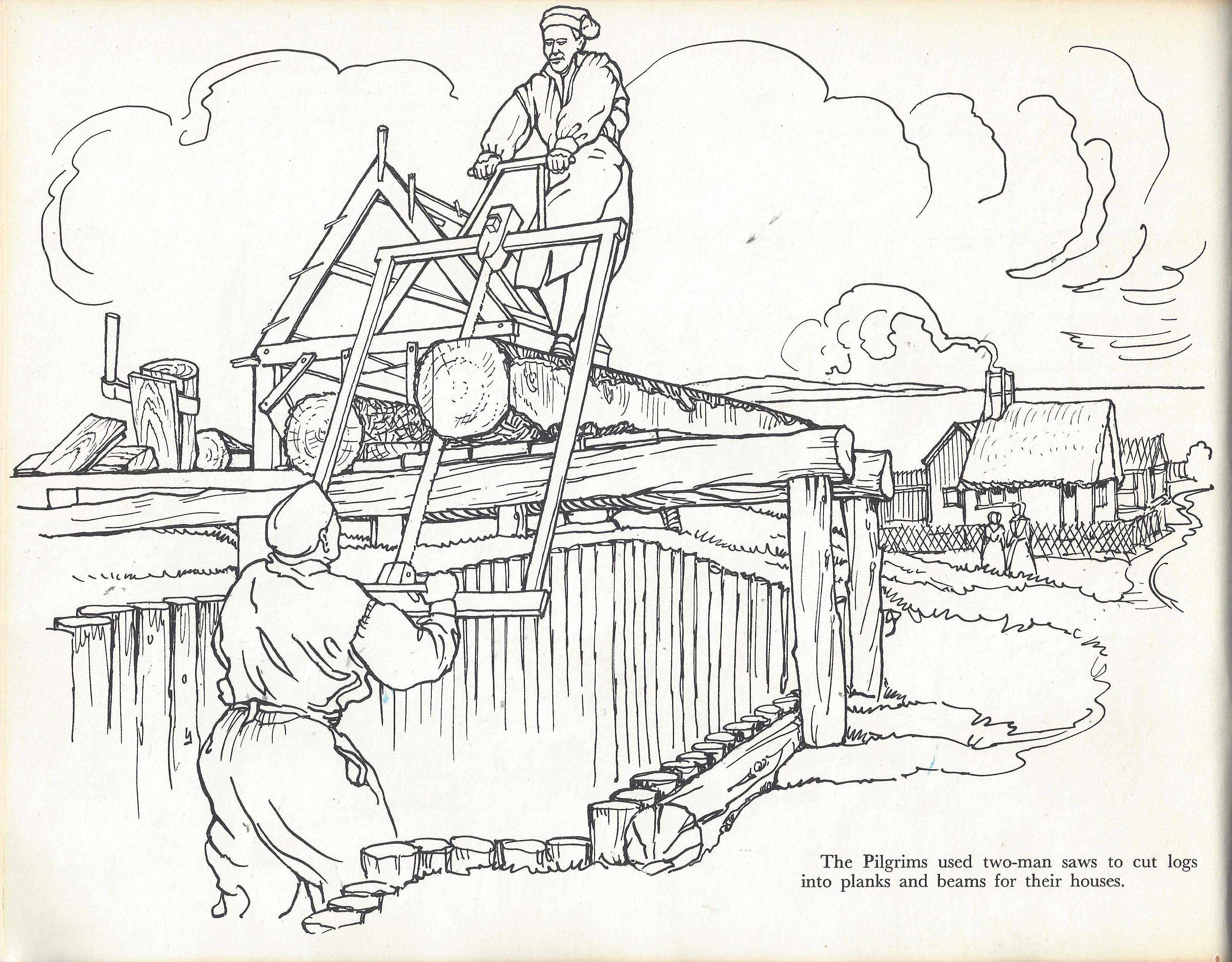 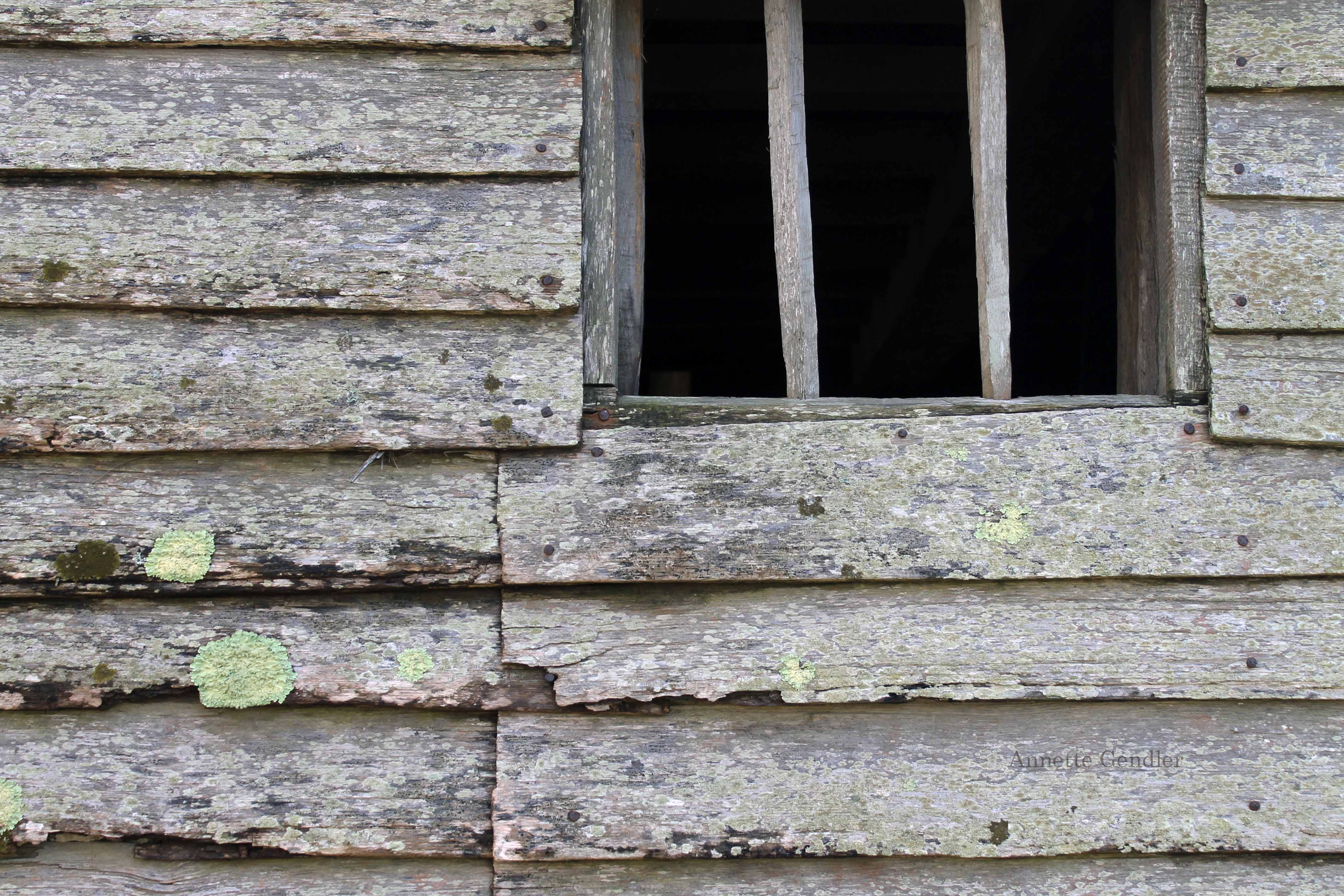 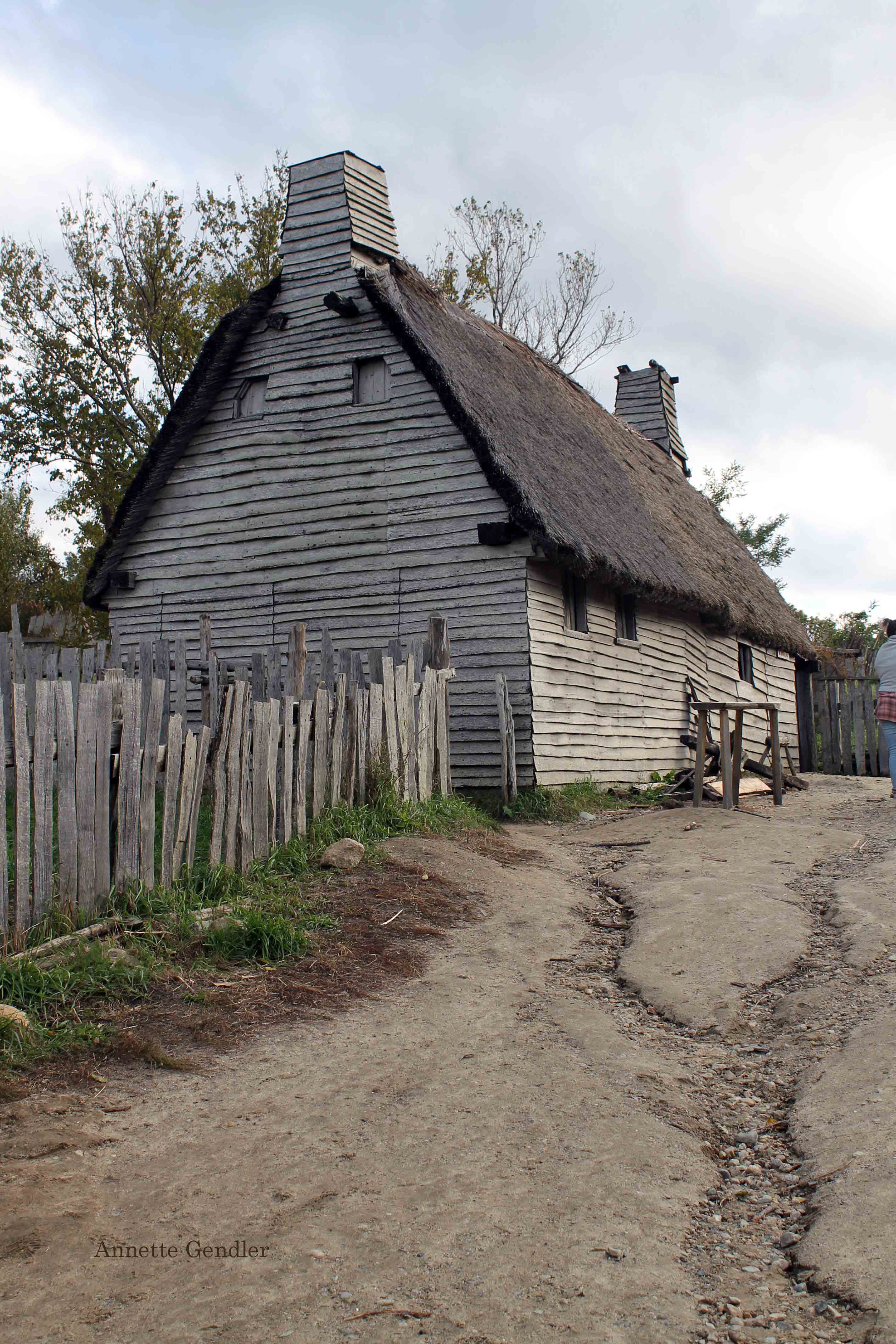 One historical village dweller told us the Pilgrims left Holland, where they had been for a decade after fleeing England, because they feared their children’s assimilation into Dutch culture. Here there was no city life to assimilate to, no grocery stores, no hardware stores, no libraries, no entertainment.

Whatever they had, they had to have brought with them,

in particular tools to build their houses, or the kitchen pots and utensils to prepare their meals. 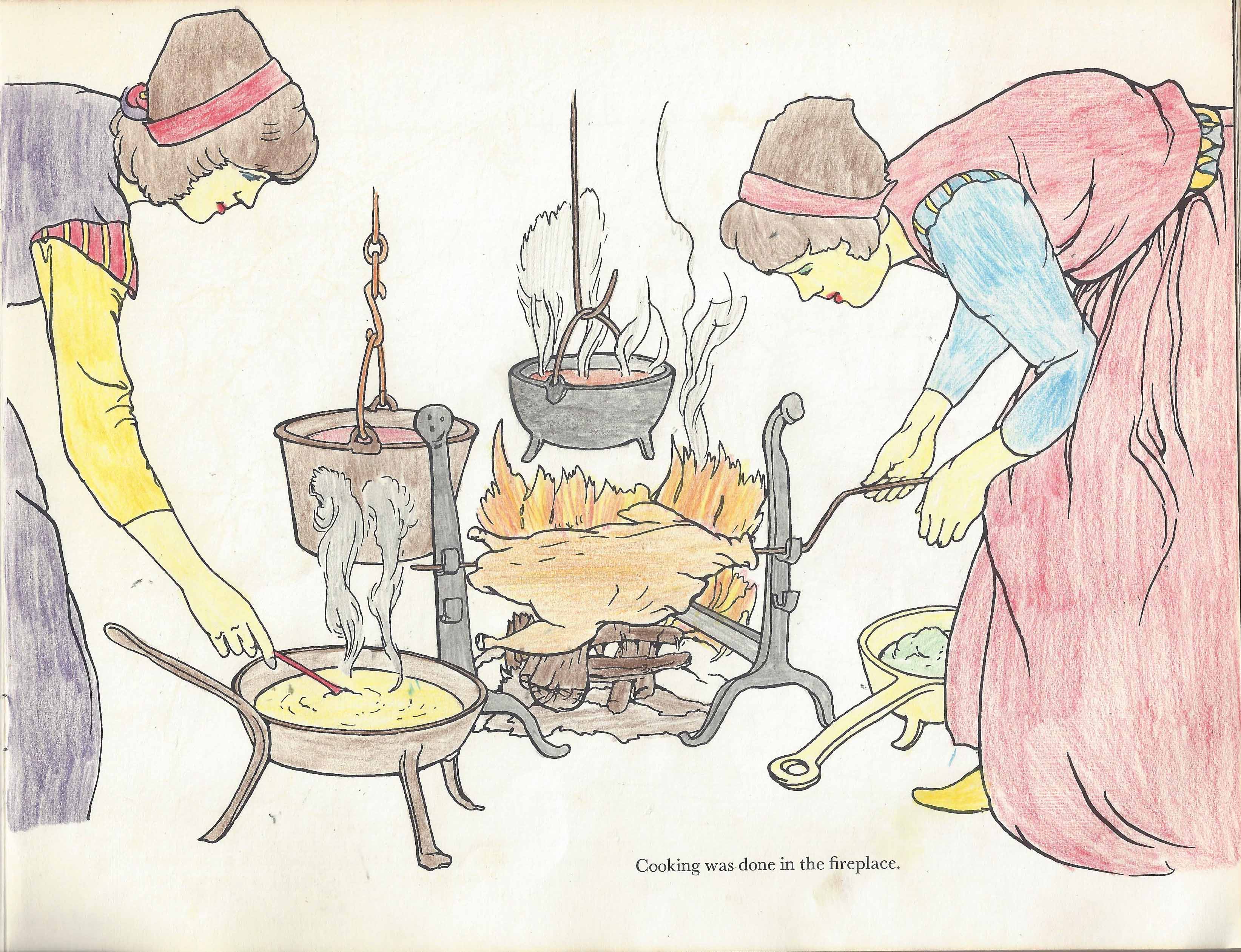 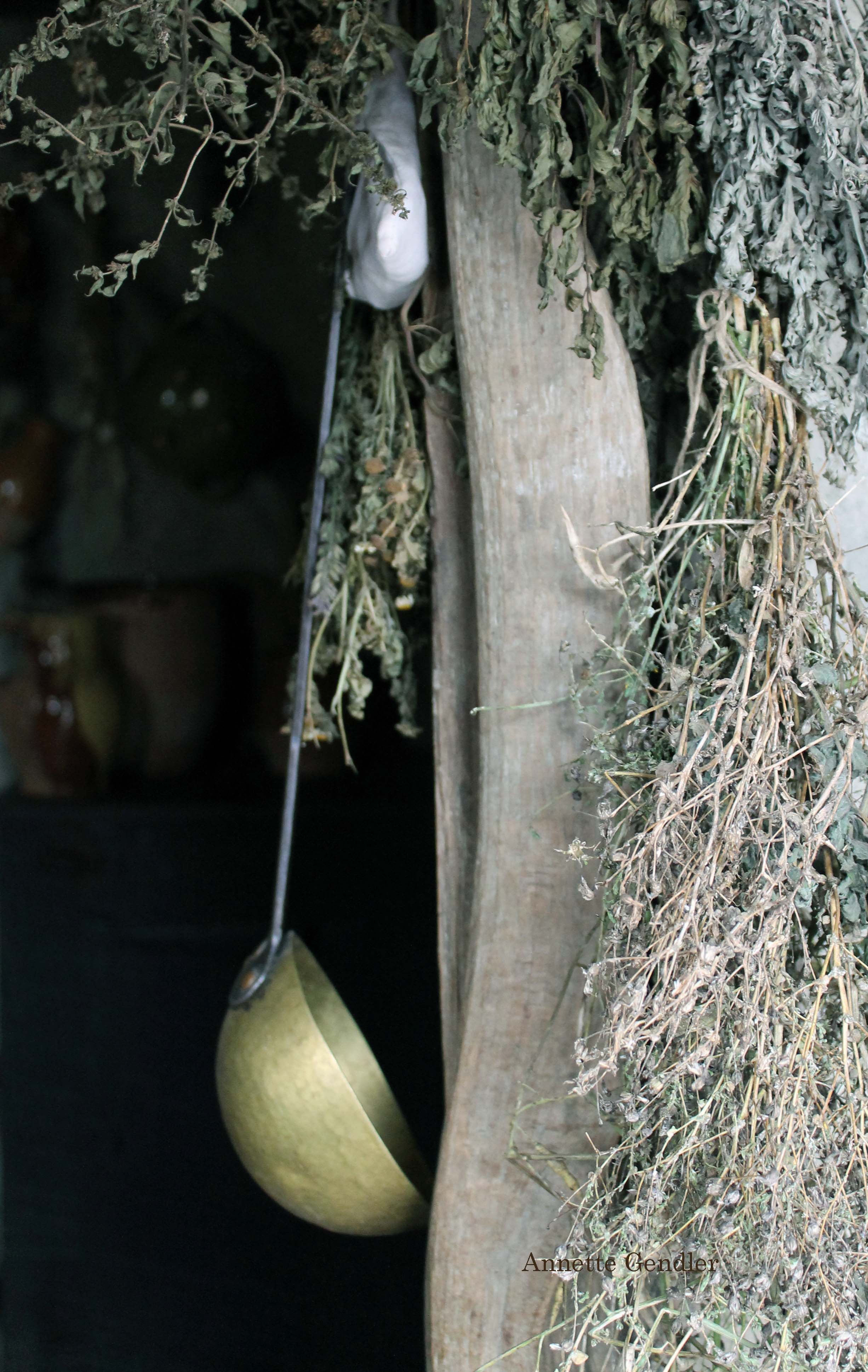 Thankfully, the local Native Americans were largely friendly. They taught the colonists how to grow corn (a new crop for them!), hunt and fish.

And thus we have the story of the first Thanksgiving

celebrated in the New World in the fall of 1621, the year after the Pilgrims’ landing. 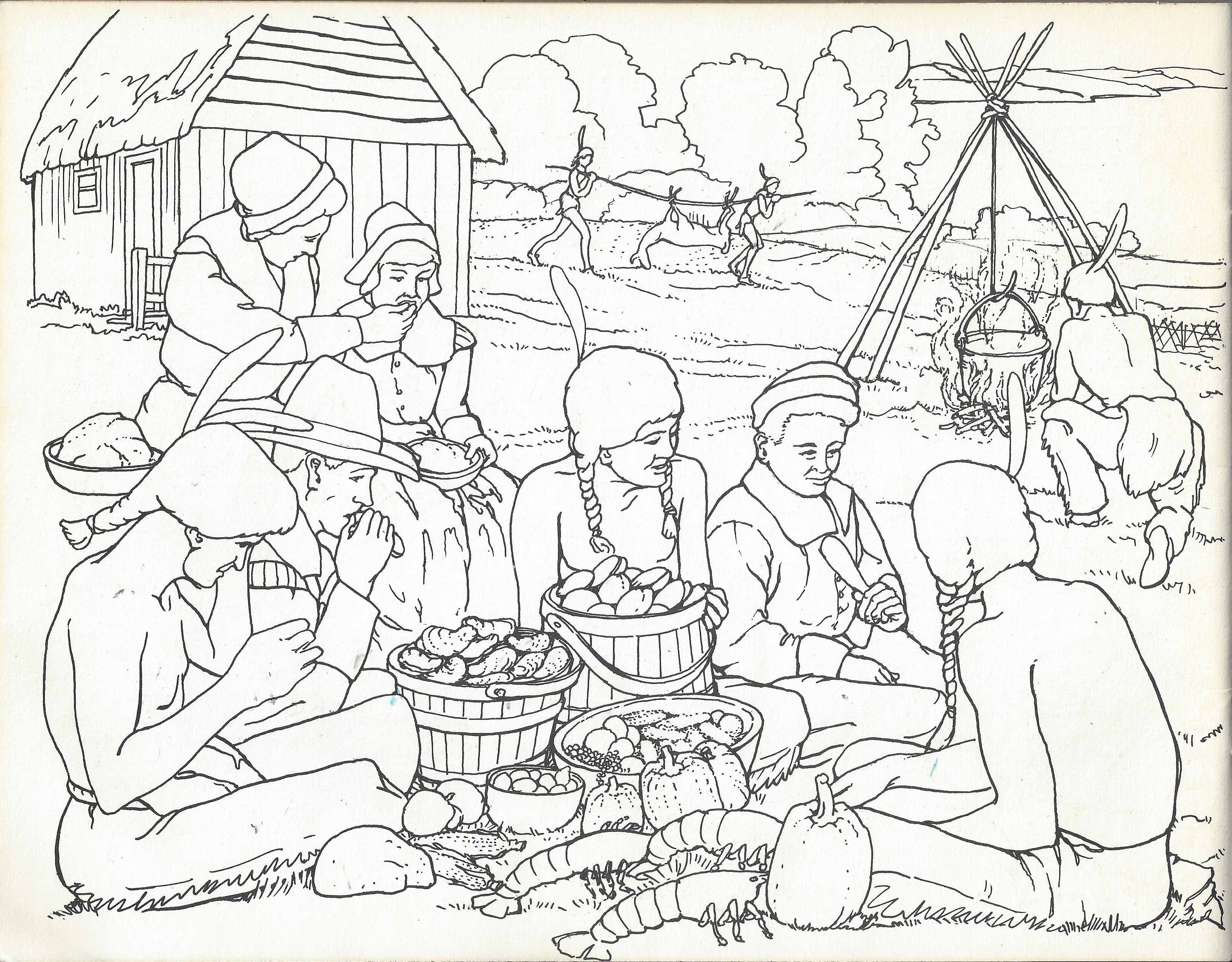 No matter what one thinks of subsequent history, the story of the Pilgrims, their voyage on the Mayflower and their settling in New England is an amazing one. As is the fact that almost 400 years later we still celebrate Thanksgiving. And we celebrate all those foods of the New World that were new to the Pilgrims: turkey, potatoes, corn and all those varieties of squash.