Hip Labral Tear Surgery (Hip Arthroscopy): My Experience and My Take On It Two Years Later 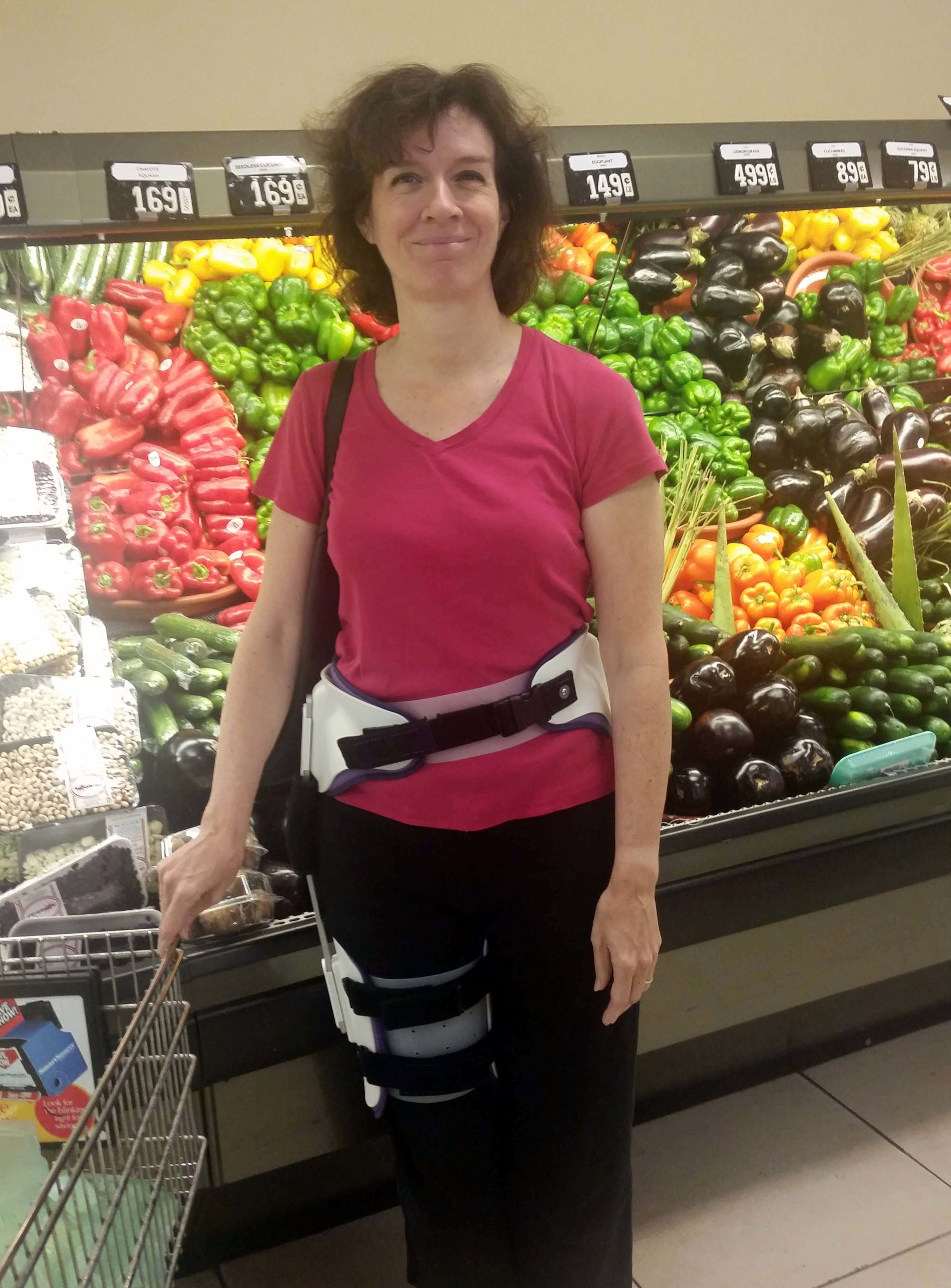 That’s me one month after the surgery in the body brace I had to constantly wear for six weeks post op. This was on my first trip to the grocery store!

This week marks the two-year anniversary of my hip labral tear surgery.

Anniversaries always make me want to reflect on the experience, especially one that was life altering.

I offer this write up as information for anyone contemplating this surgery.

I hope my experience will help someone decide or at least prepare for what might lie ahead.

On July 8, 2018, I underwent hip arthroscopy at Northwestern Memorial Hospital to fix the torn labrum in my right hip.  The labrum is the buffering material that lines the hip socket. An MRI revealed that mine had a tear, which, according to all the doctors I consulted, caused me pain when sitting. This pain first felt like a cramp in my right groin.

The longer I sat, the more pain I had. Driving was the worst.

I can’t pinpoint when this pain began. However, I remember doing exercises my physical therapist sister had given me to alleviate this “cramp” in a Jerusalem hotel room in the summer of 2017.

What caused this labral tear?

In any case, by January 2018 the pain in my hip kept me up at night. Thus I embarked on trying to find out what this was and what I could do about it. X-rays showed nothing amiss and no significant arthritis. A cortisone injection caused my hip to really flip out rather than calm down. Physical therapy did not help even though I diligently did my exercises. Finally, an MRI with contrast (a torturous procedure during which one doctor harpooned my hip  to inject the contrast into the joint while the other maneuvered the ultrasound over my hip) revealed the labral tear. Surgery loomed.

I consulted all five surgeons who specialize in labral tear hip arthroscopy in Chicagoland.

Turns out there were differences in how surgeons went about it. While everywhere the surgery was out-patient but under full anesthesia, doctors dealt differently with the bone structure that caused the impingement. Some shaved off parts of the neck of the femur to create more space in the joint. In that case recovery meant three weeks on crutches to keep weight off the joint. Given that the neck of the femur likes to break as humans age, my husband and I were leery of weakening that bone, even though the doctors contended this was a minor issue.

The surgeon I went with shaved bone out of the hip socket itself to create more space. Recovery meant no crutches but rather six weeks in a body brace to prevent me bending the hip to 90 degrees or less. Living on the third floor of a walk-up building, I found not being on crutches more attractive.

While the surgery went well, i.e. there were no complications, I was ill prepared for its aftermath.

I am not sure, however, if one can really be prepared for that. I went in as a relatively fit woman in her mid-fifties.

To their credit, all surgeons had warned that recovery would take a long time.

Most said healing could take up to a year. One even mentioned that, “Tissues can still be healing two years later.” He proved to be right.

I have written about the immediate recovery in the following blog posts, so I won’t reiterate the period of the first year post surgery here:

Three weeks post op: Hip Surgery – Some Insights from My Recovery So Far

One year later: How the Experience of Tremendous Pain Changes You Forever

Two years later, what can I say about hip labral tear surgery?

Be prepared for an incredibly long recovery.

Right after the surgery, my surgeon told me that “the hip clings to inflammation.” Indeed, it does! Even people much younger than me take a long time to recover from hip labral tear surgery (see, for example, A Tale of Two Hips).

While I faithfully stuck to the prescribed regimen of painkillers and anti-inflammatory medication for the first four weeks, I suffered their side effects, primarily befuddlement and constipation. By August I figured out that the anti-inflammatory was giving me the blues, so the doctor switched me to a drug that is basically a high dose of ibuprofen with a component that guards against ulcers. That helped take the edge off the pain but made me prone to confusion.

I was in physical therapy for a year.

While I had regained enough strength to travel five months after the surgery (see my photo essays of our trip to Jordan), I could not sit without pain until 14 months postop. I always had to manage how and where I sat. On the rinky-dink bus in Jordan, for example, I sat with my right buttock off the seat so I could extend my leg into the aisle. 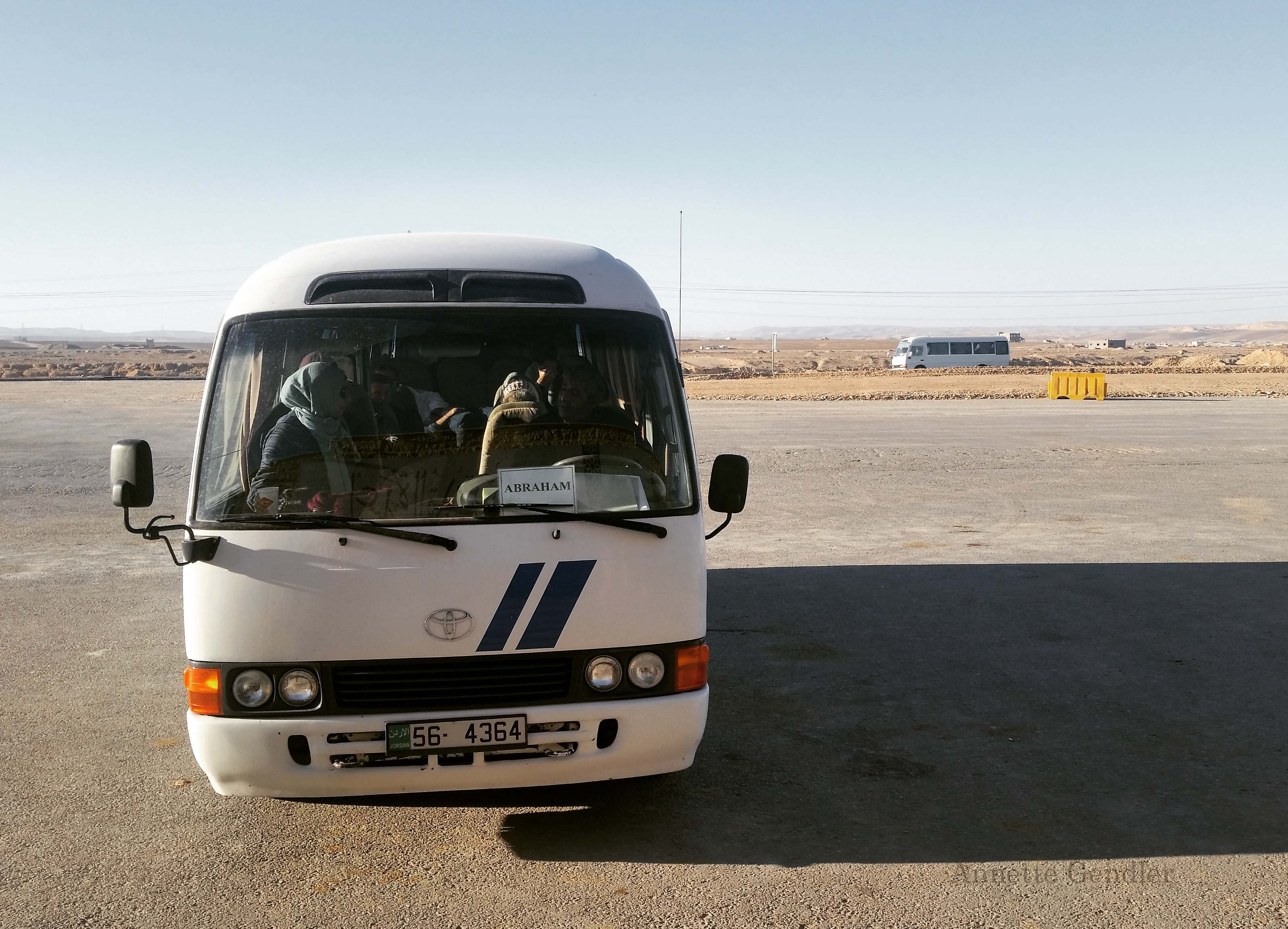 Our tour bus in Jordan

It took 14 months for my hip to feel better than before the surgery.

That means I was finally able to sit in a restaurant booth without immediately feeling pain in my groin. Prior to that, I simply could not sit without hurting. If I sat for longer than 30 minutes, the old pain in the groin was there like it had been before. Six months postop, my surgeon had another MRI done. It confirmed that the surgery site was healing properly. Nothing was structurally amiss.

Eleven months in, I gave in to his urging and that of my physical therapist, and got another cortisone injection. They hoped it would nip the inflammation in the bud and bring relief. It didn’t. Like the first injection I had gotten before the surgery, it just upset my hip joint even more. Once that upset had ebbed off, I was back to where I had been. 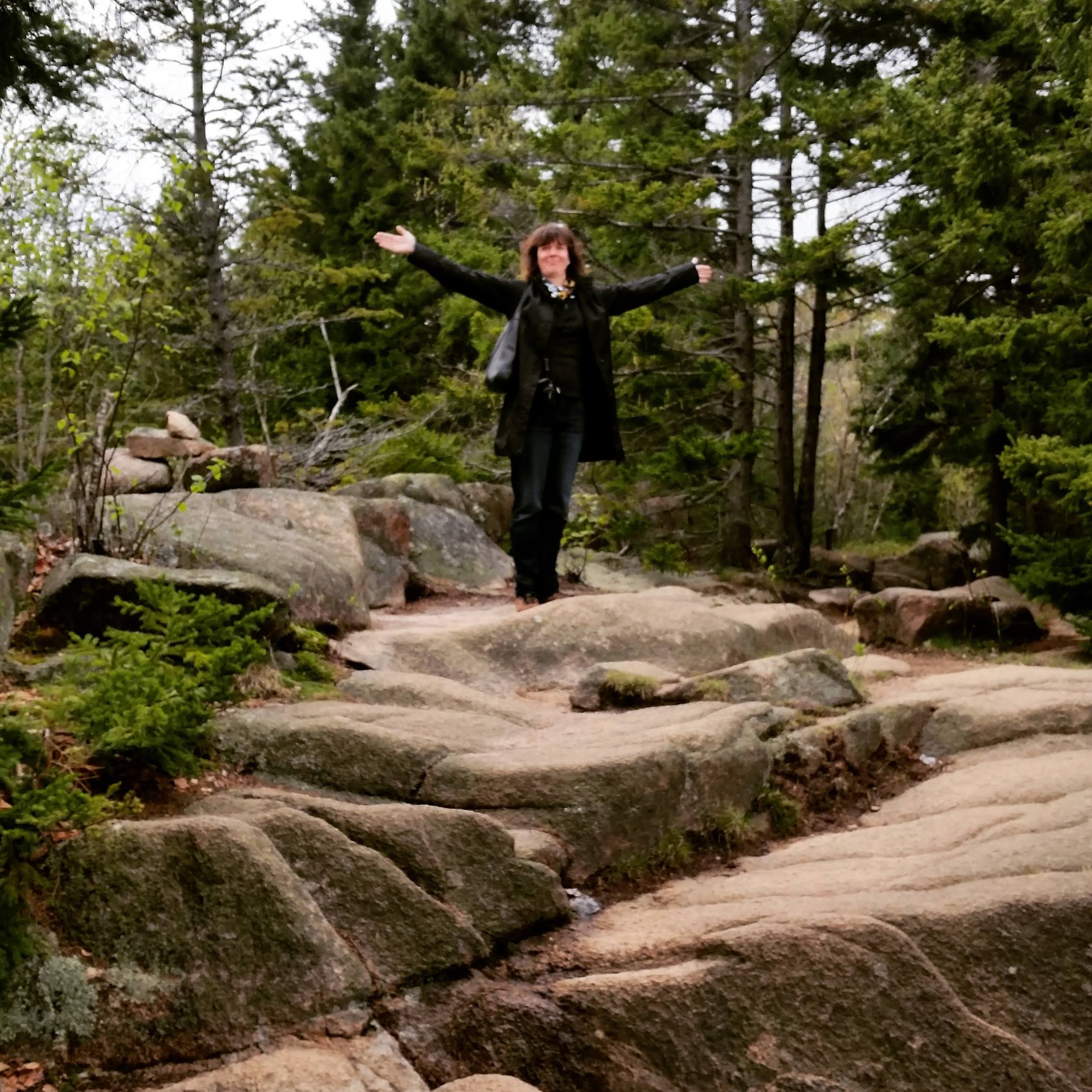 That’s me in Acadia National Park, May 2019. Ten months postop, I finally had the strength for longer hikes. But I still couldn’t sit without pain…

I had lost strength in the entire hip region.  It took ten months for me to get it back.

If I stood in the kitchen for a few hours cooking, my hip region would hurt so much I would have to lie down and take pain killers. Every so often, that burning pain would flare up for no apparent reason. It was disheartening, to say the least. Not until our trip to Maine, ten months after the surgery, was I able to do what I had been able to easily do before the surgery, i.e. hike for longer periods of time, or stand in the kitchen for hours, without my whole hip region hurting like hell.

I developed sciatic pain in my left butt that I did not have before the surgery.

The body brace and constant pain my right hip permanently messed up my left back side. My whole posture was off and my left butt cramped all the time. I now had a problem I did not have before and it took a good year until that problem subsided. I still do daily exercises to keep it at bay.

Knowing what I know now, I would get psychological support for the recovery.

I had been focused on the physical aspects of the surgery and the recovery. I never considered that the experience would be so challenging emotionally and mentally. It was demoralizing, to say the least. In addition:

The chronic pain gave me anxiety.

Something I never had before! A few months after the surgery, I would get really stressed out in pressure cooker situations. I couldn’t execute what I was supposed to, such as finding the right directions while traveling. Someone in my family had to take over. More than a year after the surgery, when the hip itself finally was doing better, dread would settle over me for no reason. Finally now, during the COVID-19 crisis, it got so bad that I got help from a therapist. Then I learned that chronic pain can cause anxiety. One reason is that when you suffer chronic pain, a percentage of your mental capacity is busy managing that pain. In stressful situations, your already taxed system overloads and can’t manage anymore.

Would I do the surgery again?

Honestly, I don’t know. Rationally speaking I probably didn’t have a choice. The labral tear not only caused me pain when sitting, it also meant constant inflammation in the hip joint. Over time, my hip would have deteriorated from that until I would have needed a hip replacement.

At the height of my frustration I did ask my surgeon whether, instead of hip labral tear surgery, I should have gotten a hip replacement instead. My friends with hip replacements were healing faster than I was! He replied that they only gave artificial hips to people who couldn’t walk a block, which was not my problem. So again, I probably didn’t have a choice.

One way or another, hip pain has been my fate.

These days it is, thankfully, manageable. It doesn’t rule my life. Driving for any length of time is still bad for me. A four-hour drive will make my hip hurt the following few days, no matter what I do.

Walking has been the best remedy for my hip and I have managed to build a daily walking routine into my life.

I still think about where I sit, and probably I will never sit down again without considering what is best for my hip.

Two years out from hip labral tear surgery, my hip is better than it was immediately before. While I am not pain free, I can at least hope that, a year from now, I will be able to say it has improved even more.