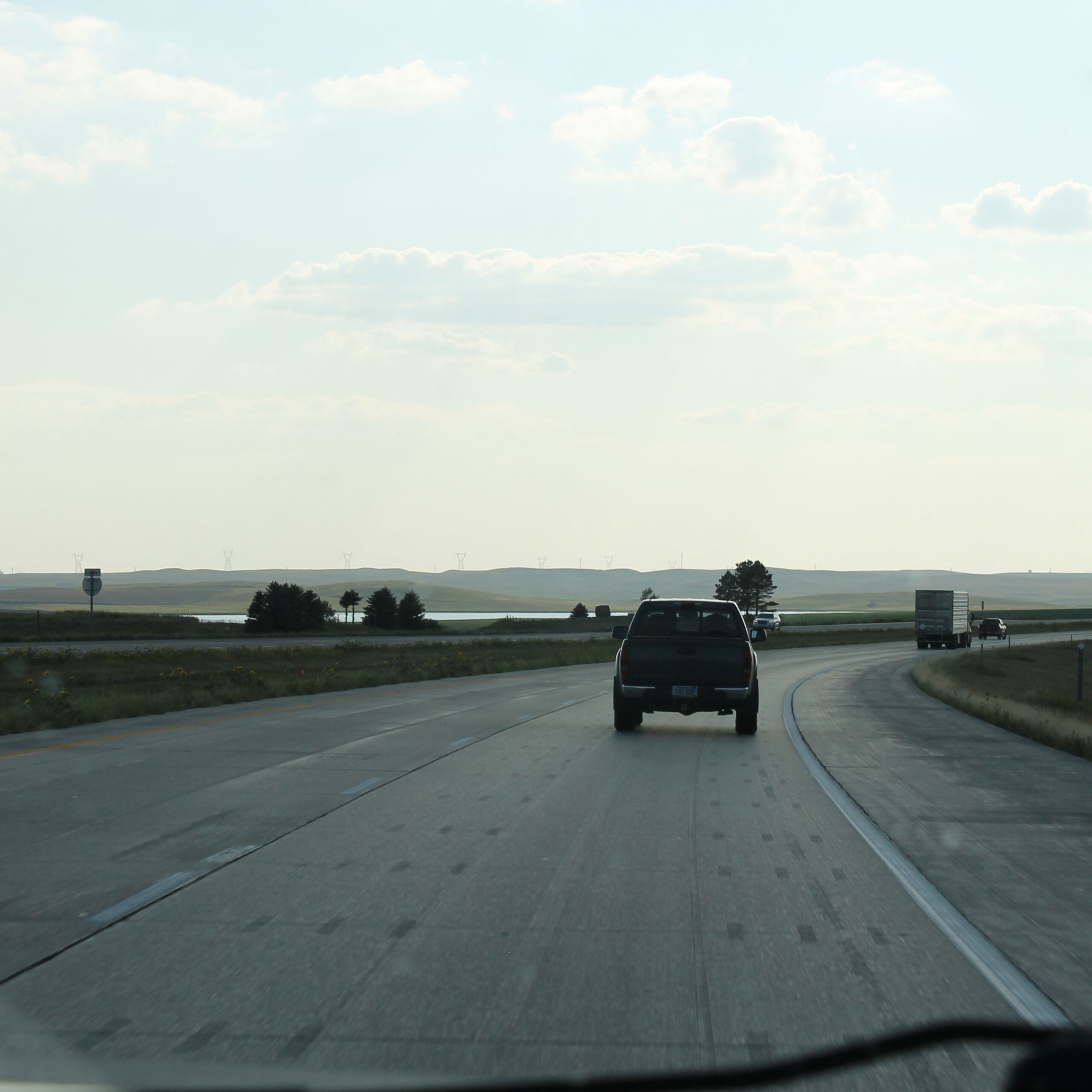 This is all I really wanted from our trip to North Dakota: The open road and wide, wide horizons. (That, and finally visiting Theodore Roosevelt National Park, see below.) I took this picture on our first day driving I-94 going west.

Fargo, North Dakota’s biggest city and right across the Red River from Minnesota, was our first stop.

I didn’t expect to fall in love with Fargo, and really pretty much everything else I saw in North Dakota.

Fargo turned out to be a charming city, with a bustling and pristine historic downtown. 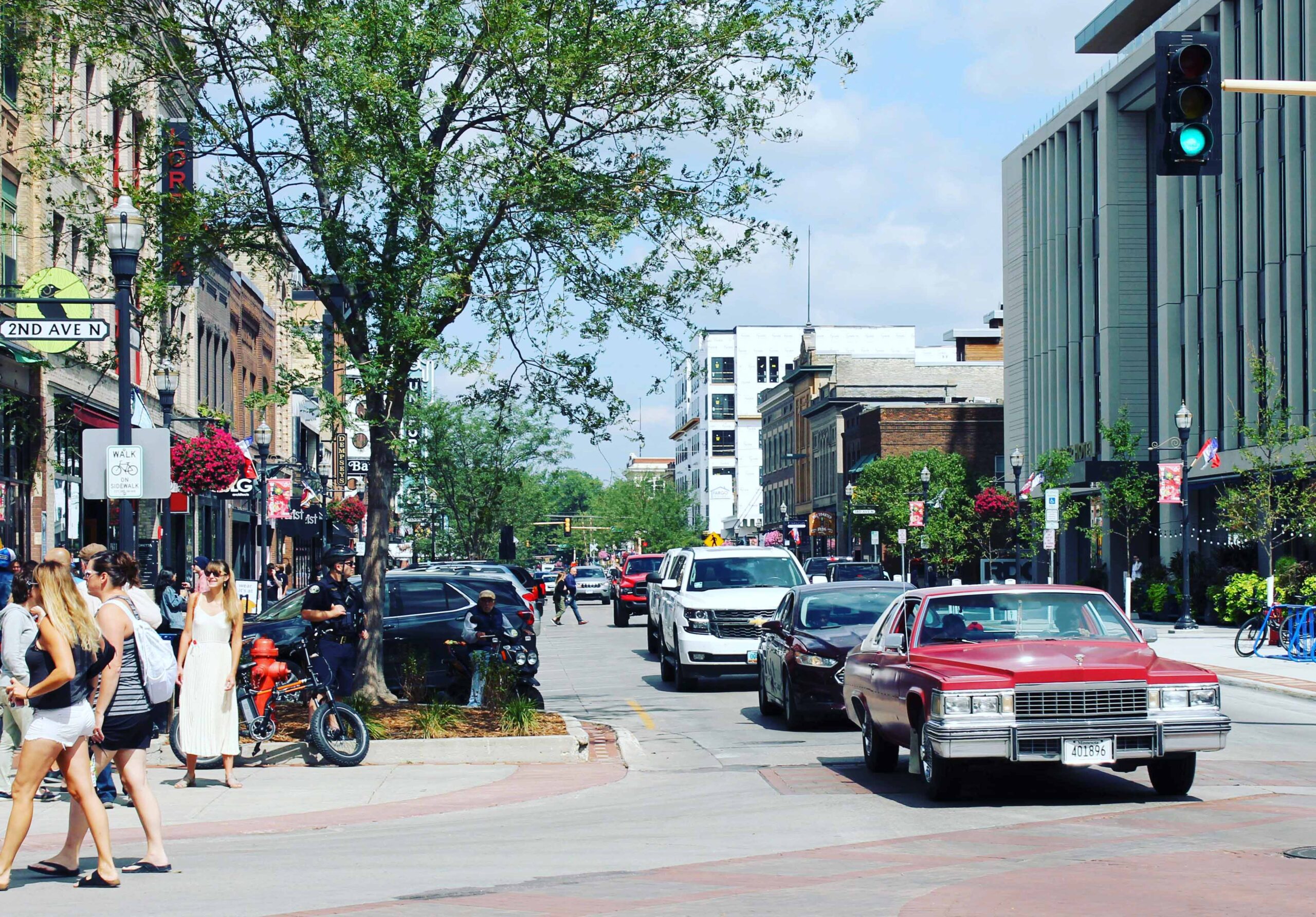 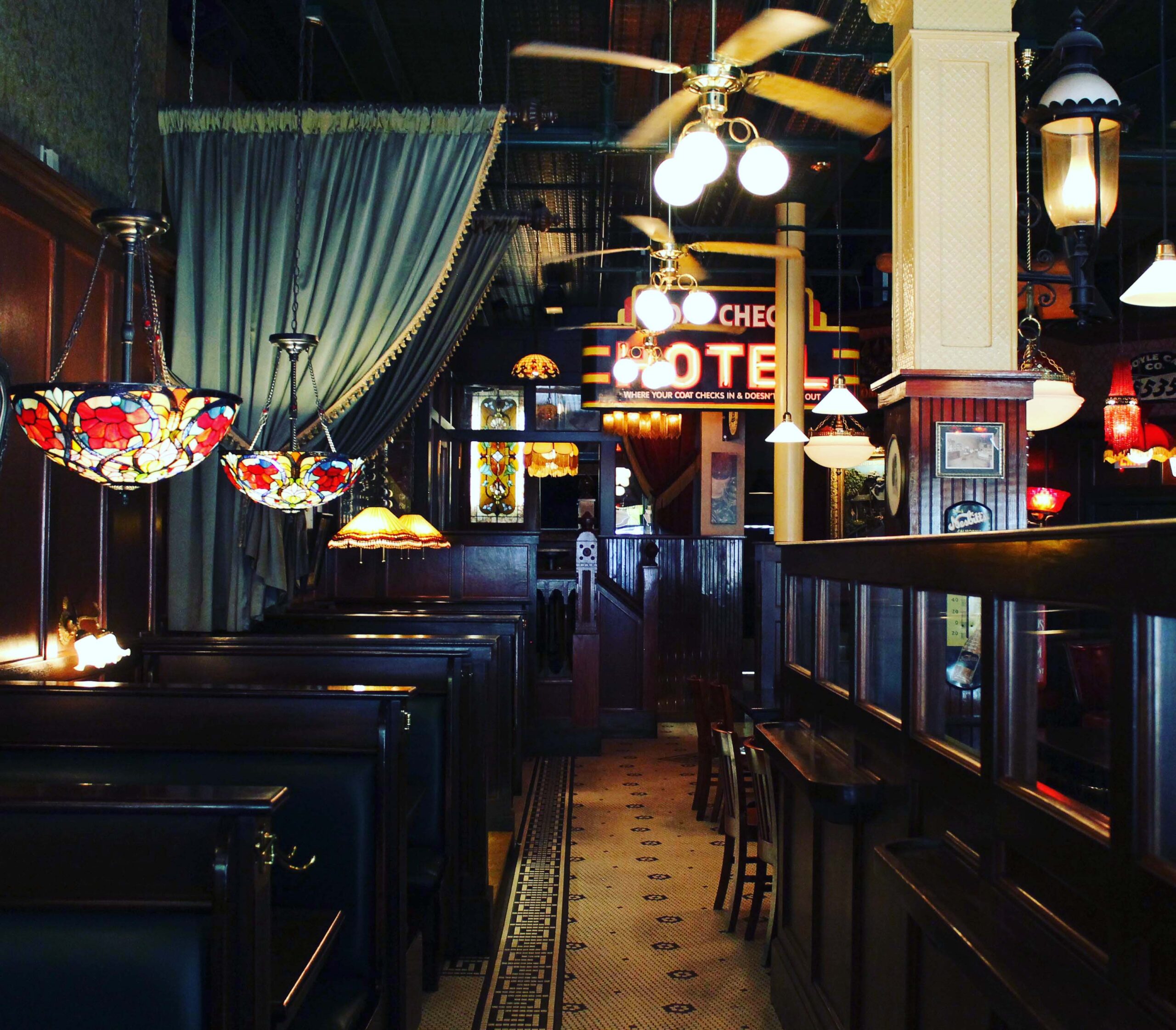 Just walking by, we found the Old Broadway Restaurant, where we had lunch and I reveled in its beautiful interior. 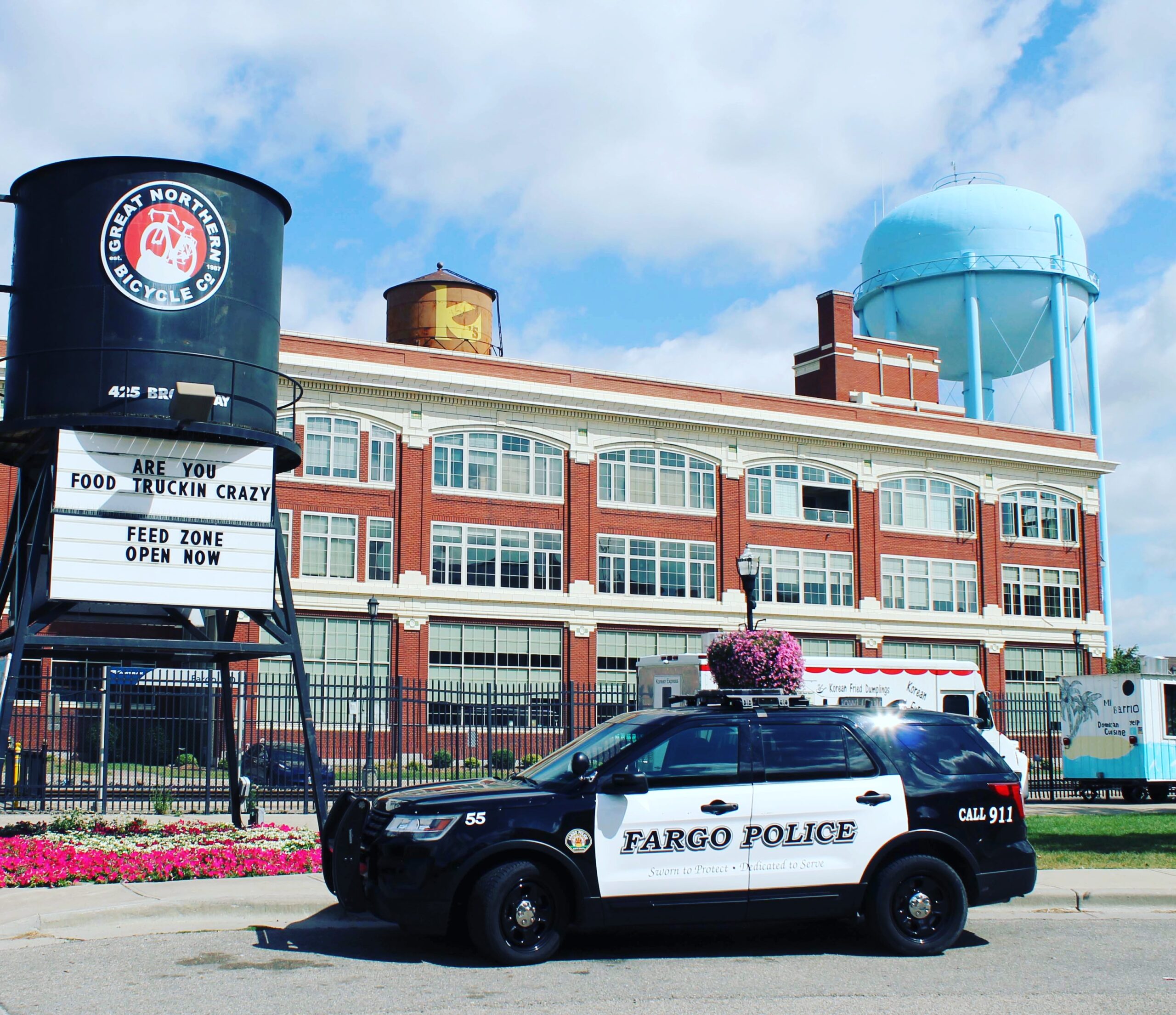 To go along with the police car: I didn’t watch the movie Fargo until we got back home.

I am glad I didn’t see it before as the town was nothing like the bleak place very sketchily portrayed in the movie, which, BTW, really takes place in Minnesota. I did also watch the later TV series Fargo, a brilliant if equally bleak spinoff on some of the movie’s plot points and characters. It also really only takes place in Minnesota. The first two seasons are really good. I can particularly recommend the second season, which has such a great 1970s retro feel to it.

On the drive westward on I-94, we stopped in Valley City to see the stunning Hi-Line Railroad Bridge.

Soldiers guarded it during WWII as it was such a crucial supply line. Reminds you that railroads were and still are so important. 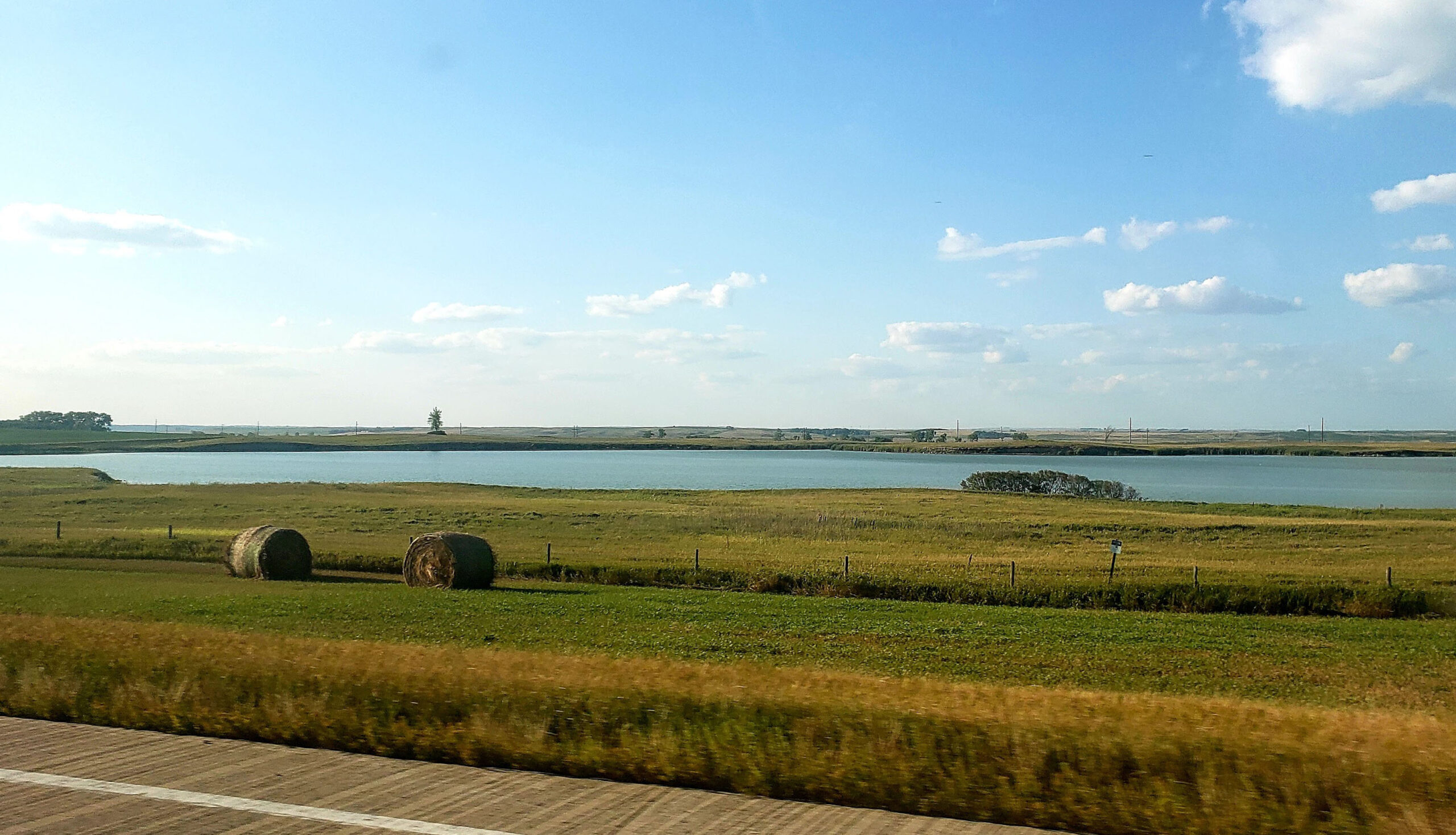 These hay bales dot the grasslands all over North Dakota. Every bit of grassland is put to use here as indicated by the hay bales that were often found along the roads.

First glimpse of the broken landscape of the badlands!

First view of the badlands of Theodore Roosevelt National Park from the Painted Canyon Visitor Center.

We should have headed the ominous clouds in the above picture but we merrily embarked on what was supposed to be a short scenic hike down into the canyon from the visitor center.

Alas, we had barely reached the canyon valley when a fierce rain storm descended. The water swiftly turned the upper layer of the badlands’ ground into slick oily mud.

Making it back out or rather back up became the kind of endeavor that totally takes your mind off everything but physical survival.

In hindsight, a rather glorious experience! 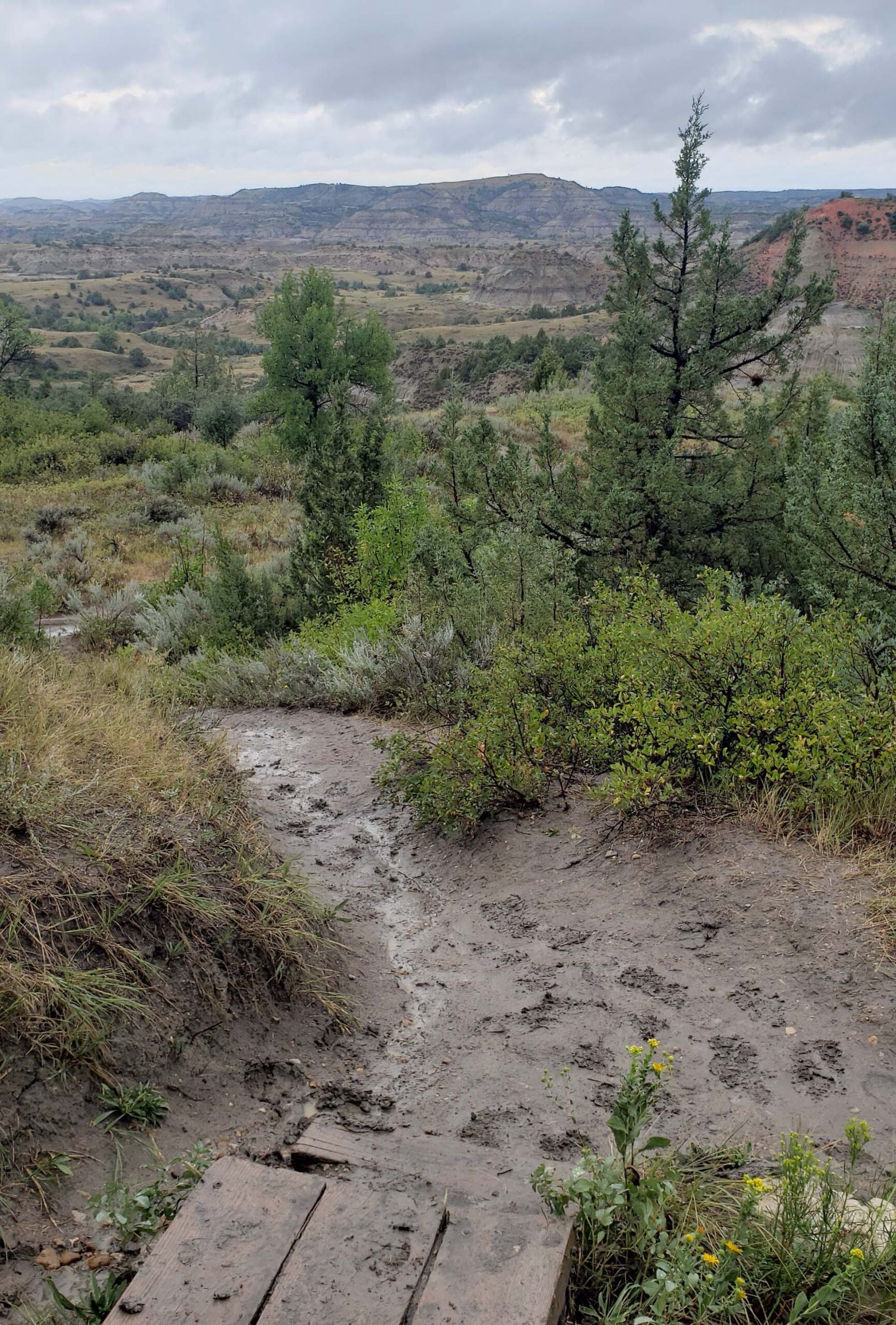 I don’t have many photos from that man-versus-nature adventure as I was struggling to keep my phone and camera dry. We had good rain jackets but still, everything ended up wet, moist or dripping. 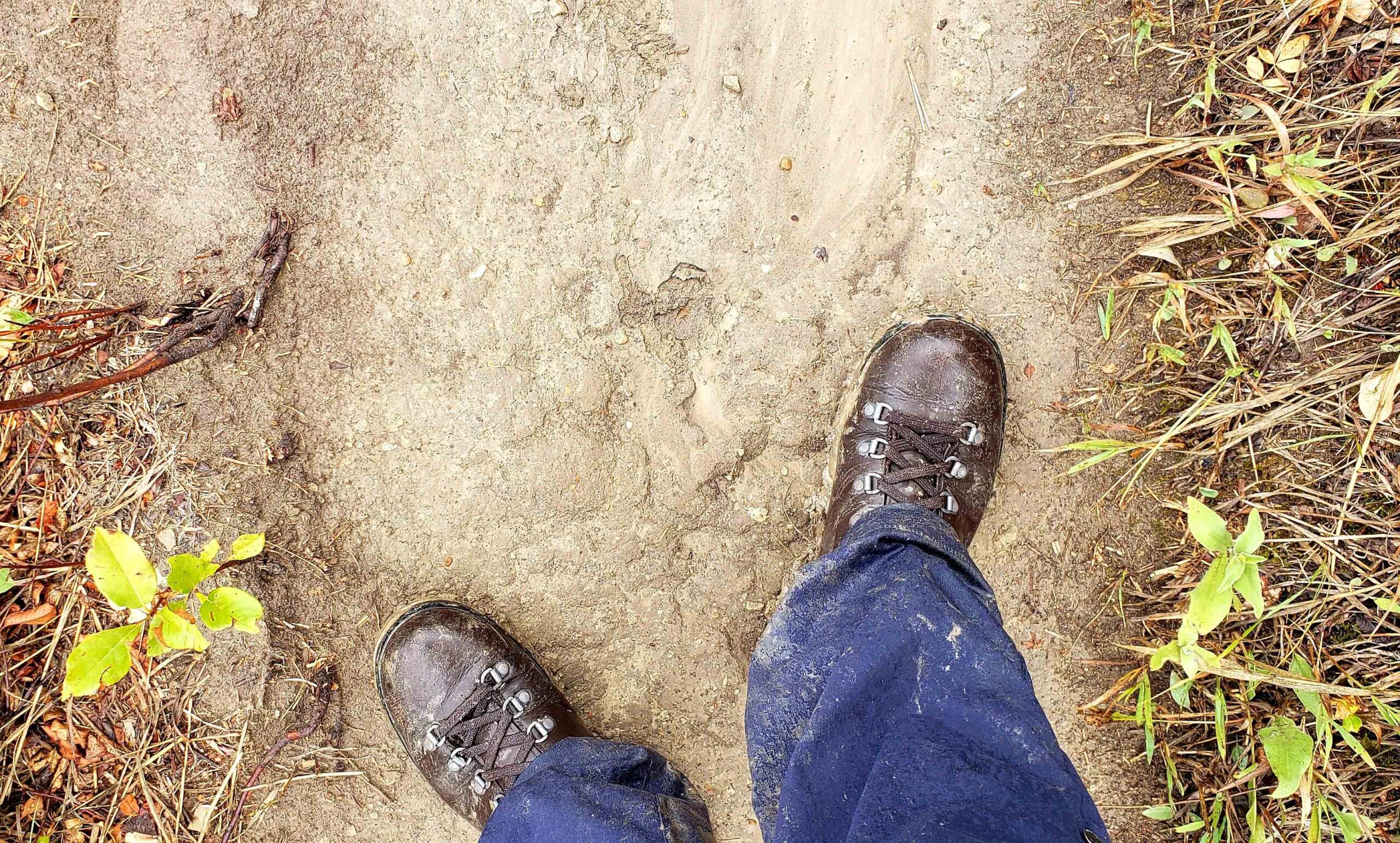 The mud stuck to our boots and turned them into mud skates.

A step up often meant sliding back at least half of that step. If it hadn’t been for grass, roots and shrubs that we could step on by the wayside to get traction, or trees to grab onto, I don’t think we would have made it out. 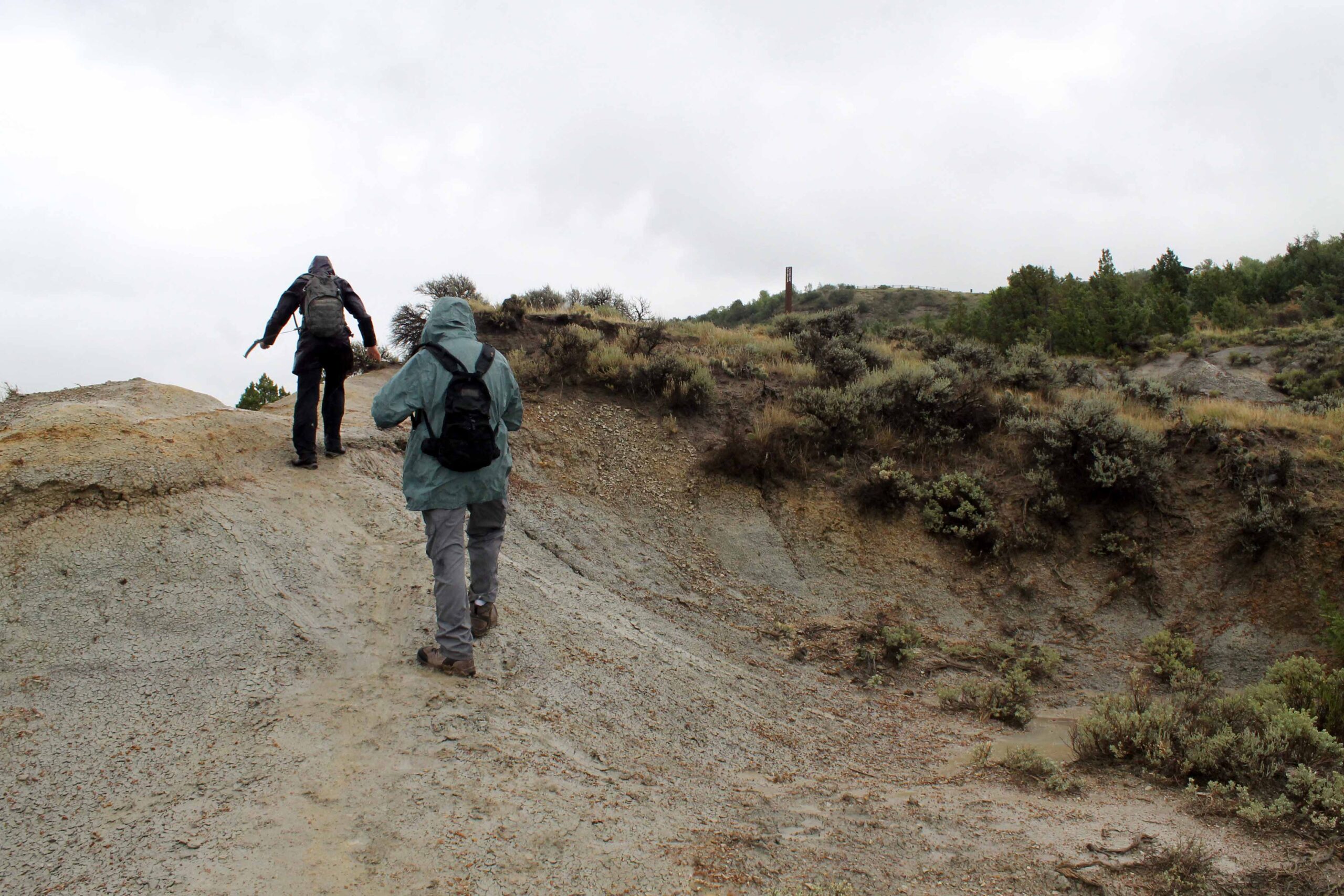 As is, we were thankful none of us fell.

Look who had taken over the parking lot during our absence! 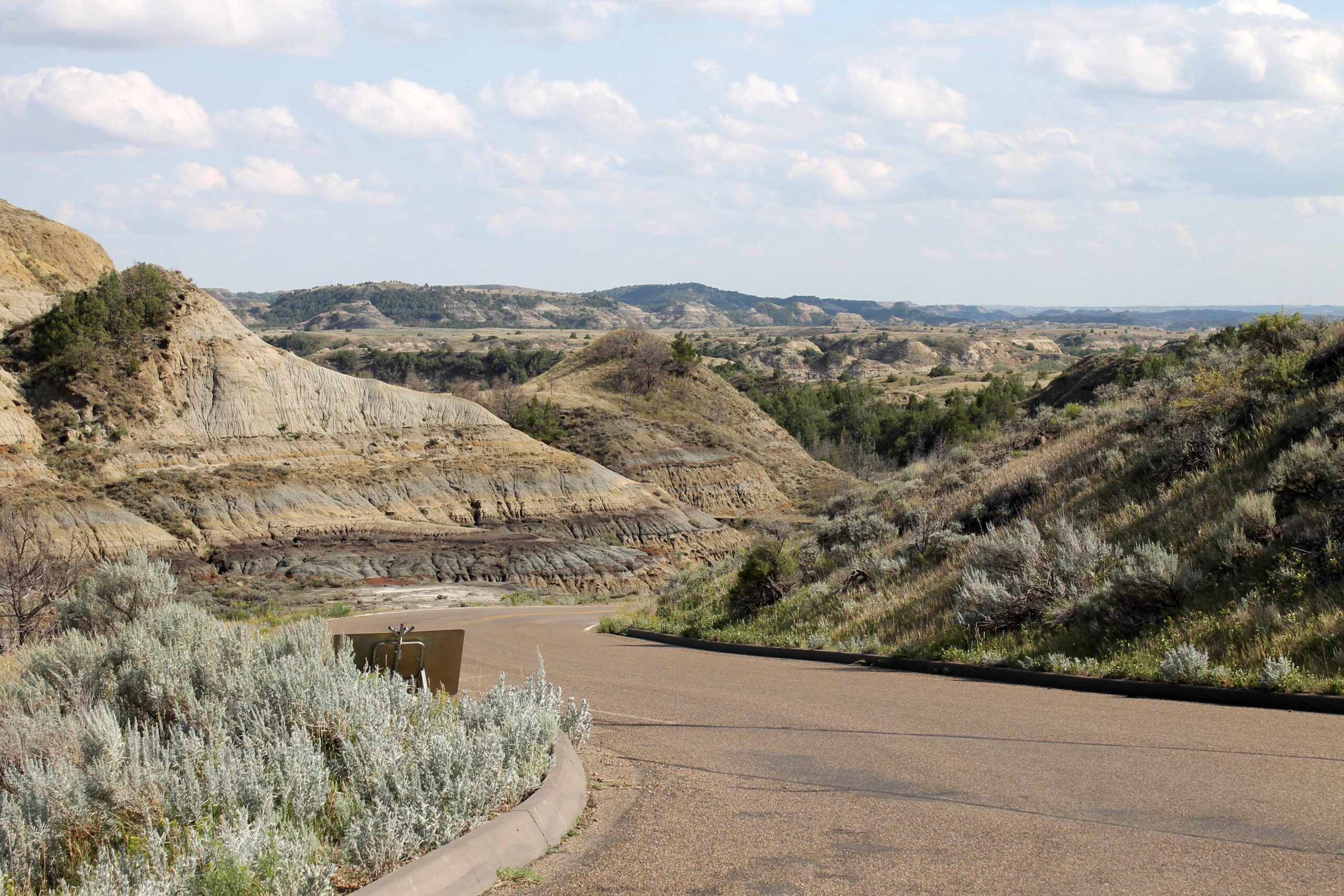 Later that day, the sun came out.  So, muddied and a bit unnerved as we were from our muddy adventure, we did do the scenic drive through the South Unit of Theodore Roosevelt National Park.

After all, when you’re on vacation, you try to pack into a day as much as you can. 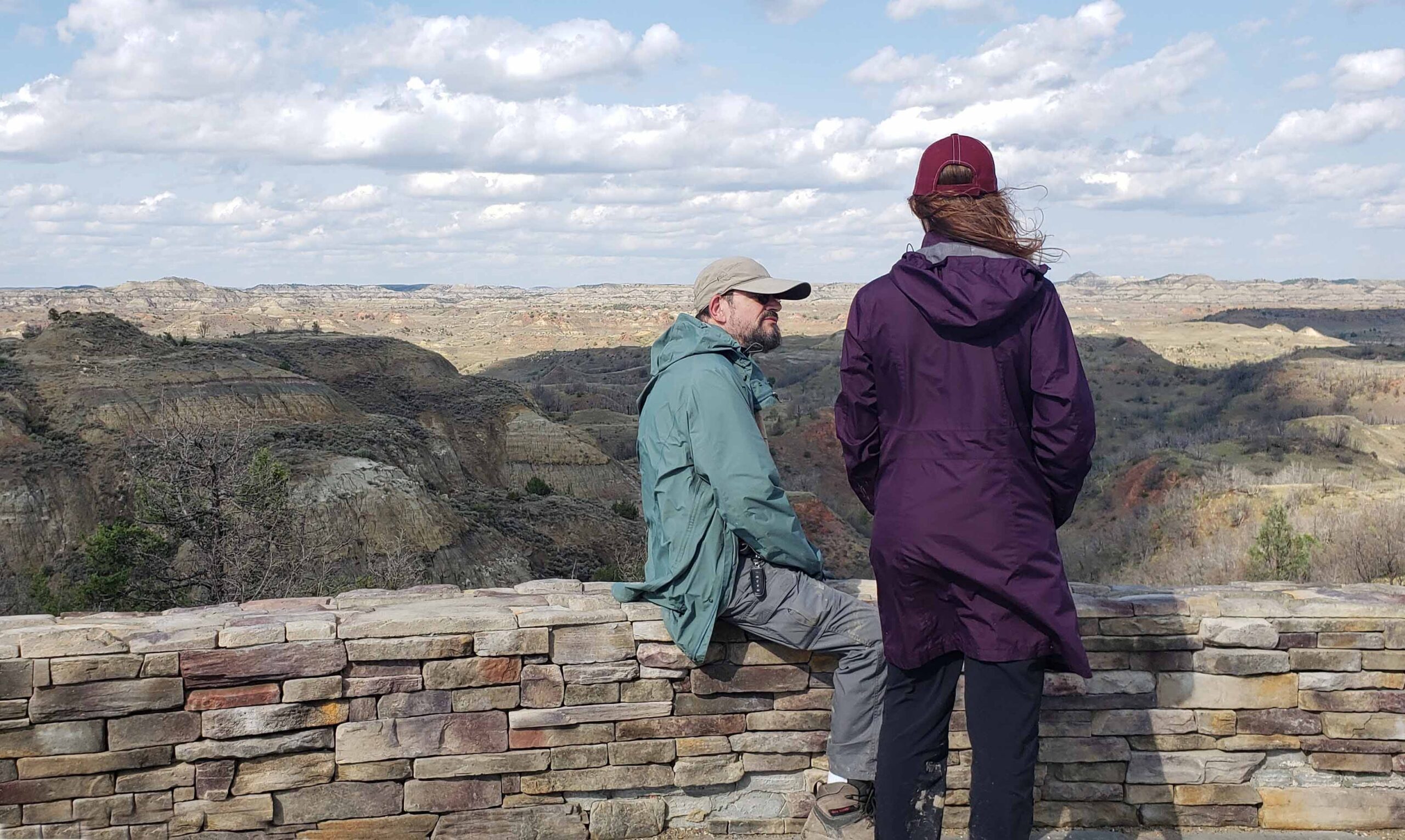 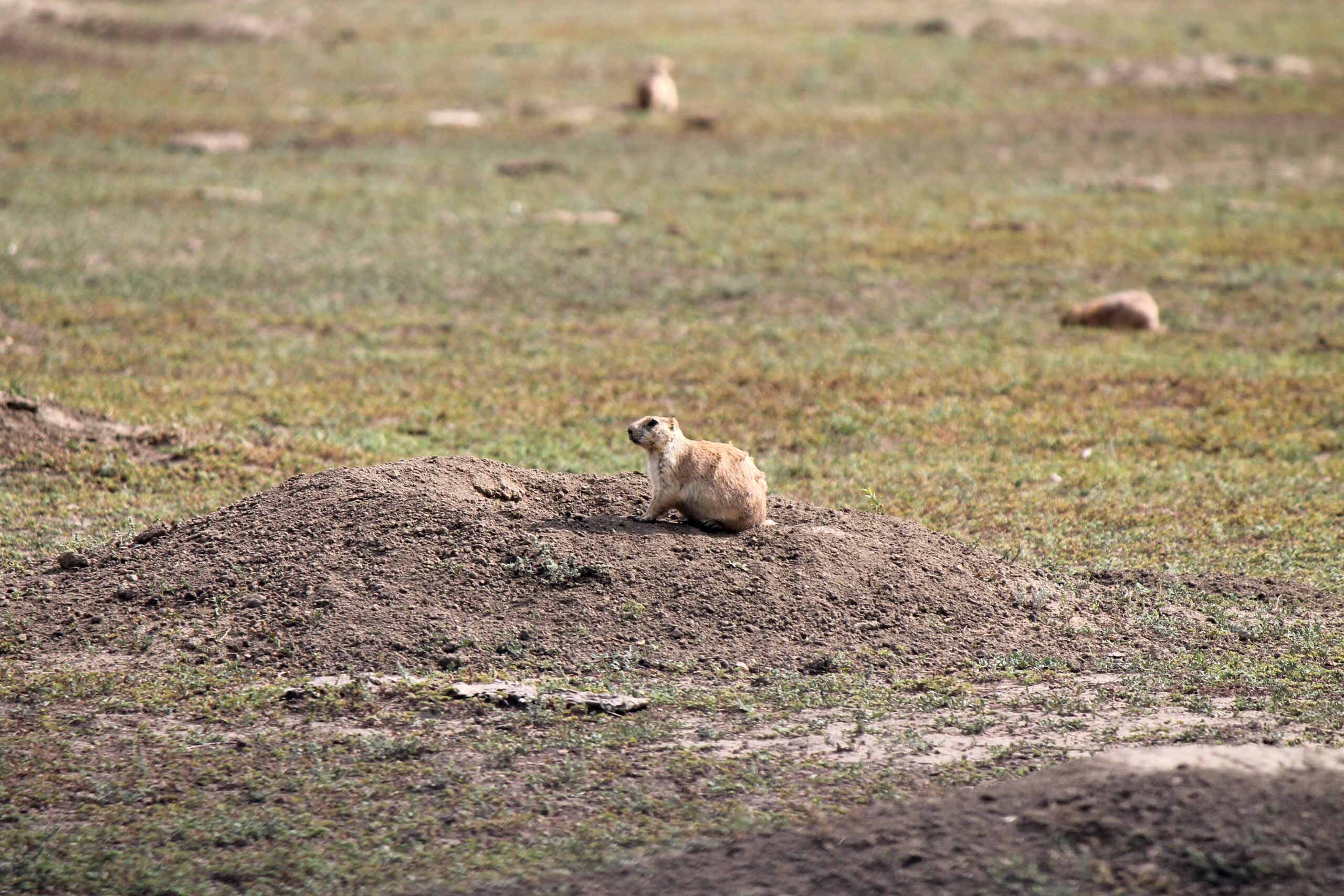 We were rewarded with a grand badlands panorama and saw plenty of prairie dog towns. We even spotted a fox but unfortunately I didn’t catch him on camera. 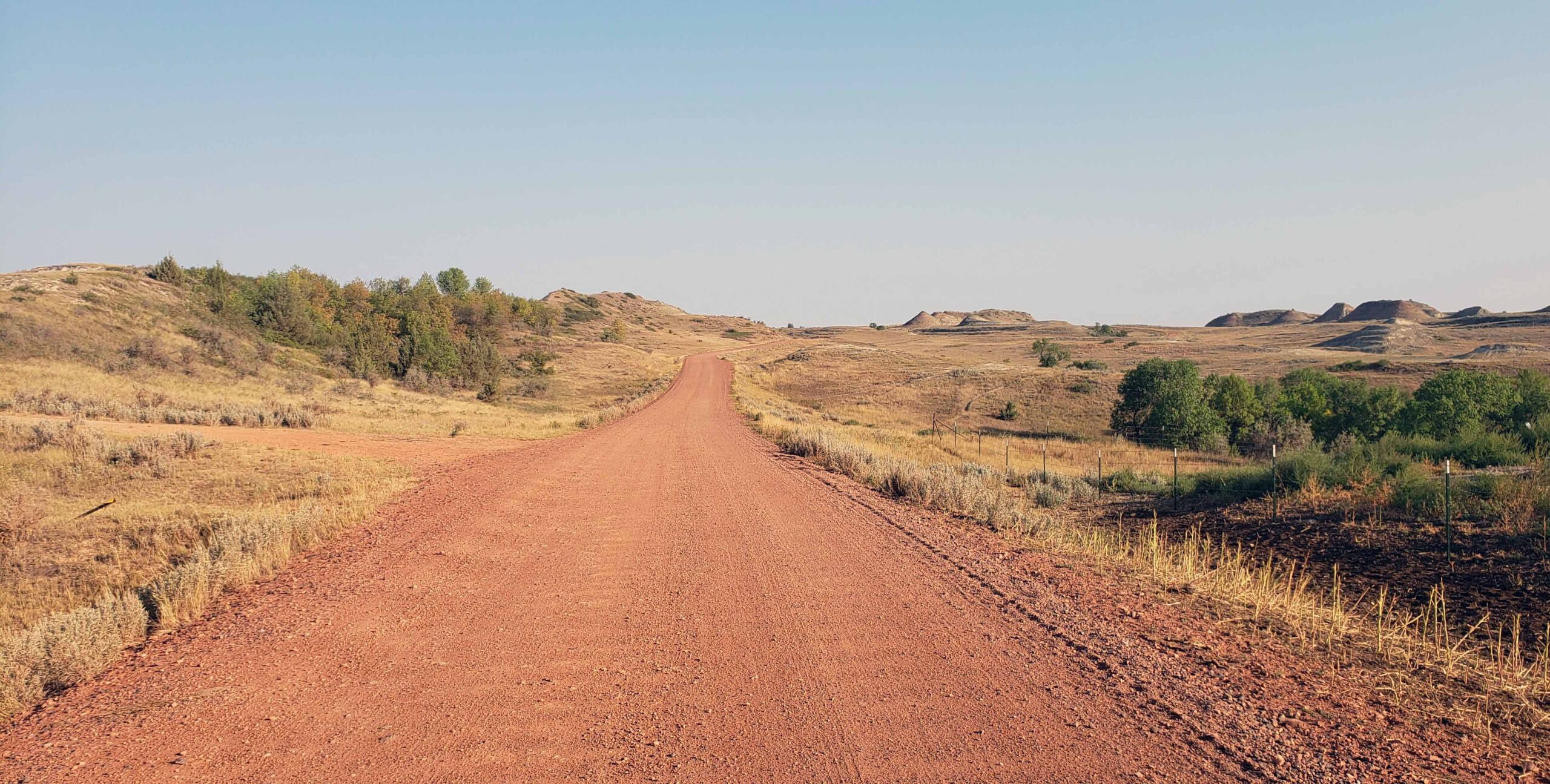 Next day, early in the morning to escape the promised midday heat, a dirt road took us to the trailhead to hike to see the Petrified Forest in the South Unit of Theodore Roosevelt National Park.

Hiking across the grassy plateau 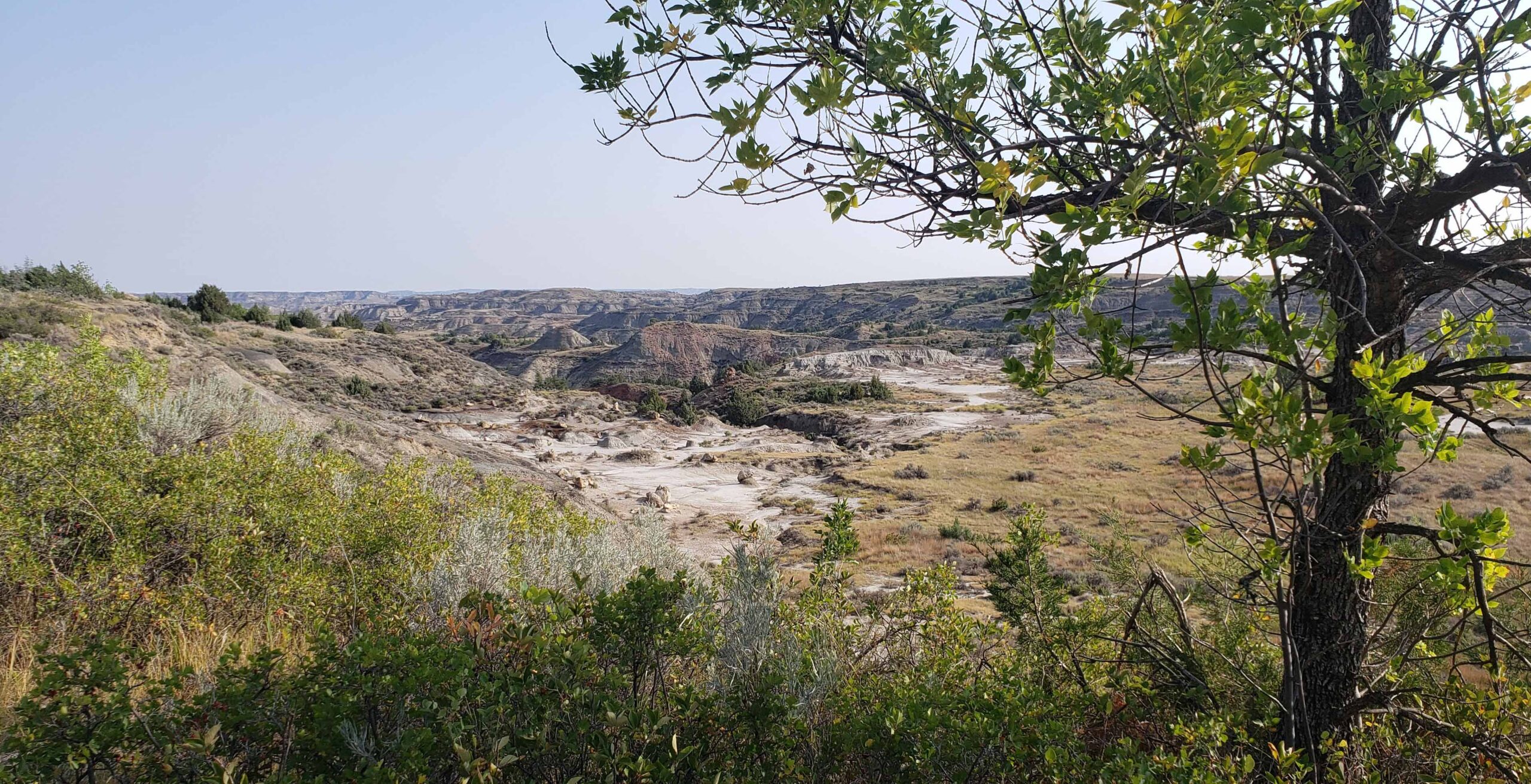 View of the petrified forest, i.e. tree stumps strewn across muddy patch below, that are millions of years old, left over from an ancient sea and turned to stone over the millennia 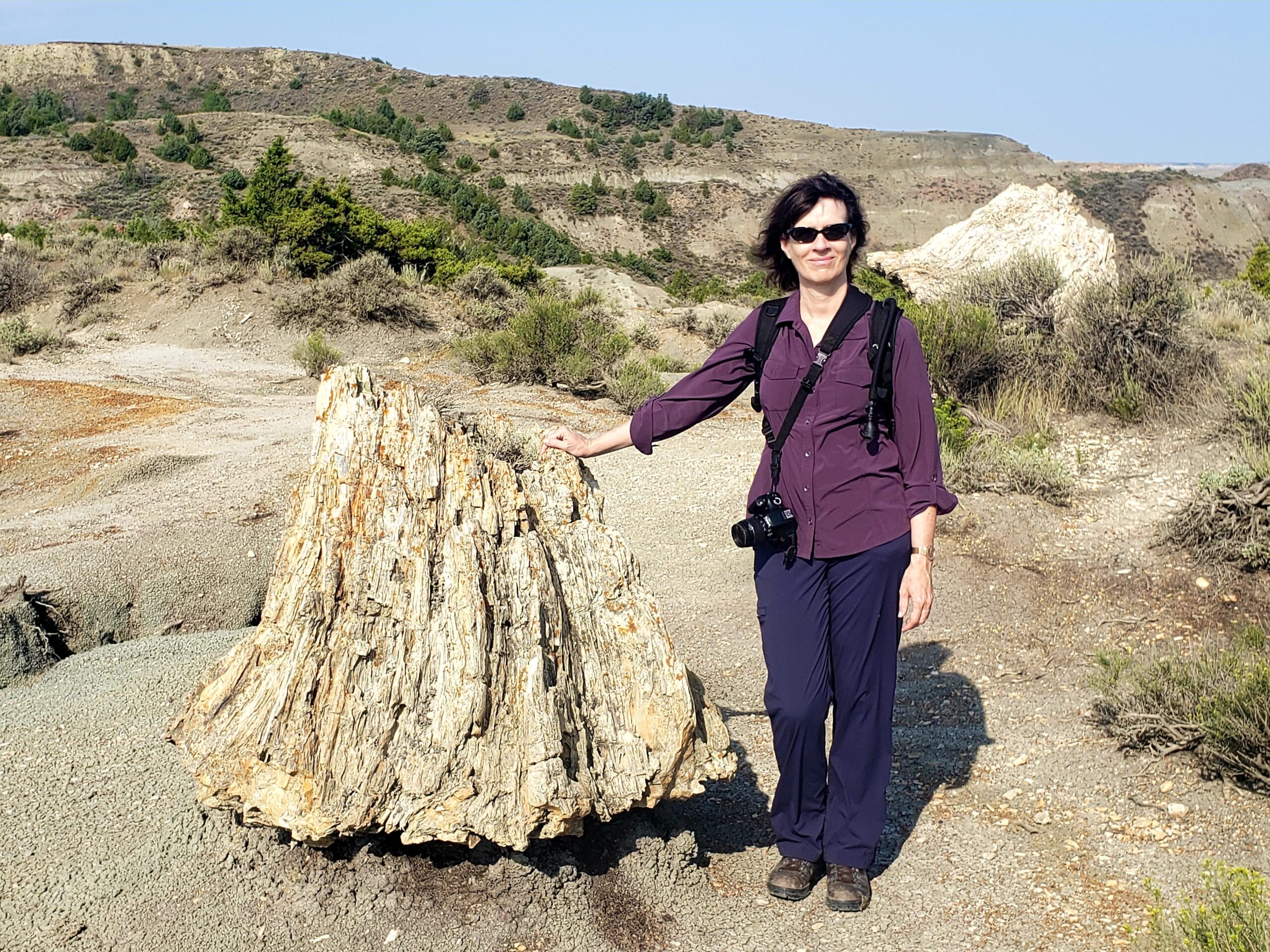 Here I am, posing next to one of those glorious tree stumps. I only took my hat off briefly for this picture! Other than that, this hike was the opposite from the mud bath the day before: On this one we were racing to beat the clock and get out of the blazing sun by midday, which we thankfully managed.

More on our North Dakota adventures in the next installment, coming soon!