How to Capture Family History in a Book of My Things – Course Countdown: Day 1 – My Dad’s Old Latin-German Stowasser Dictionary

I’m so excited that my online course Capturing Family History in a Book of My Things begins in ten days that I decided to run a countdown. I’ll be sharing some of my stories about family objects, including tidbits of my process putting them together. Hopefully that’ll give you some ideas and inspire you to come up with some of your own stories. And of course I’d love it if you joined the course! 😉

As I was cleaning out our bookshelves this summer (We had new ones built in.), I came across my dad’s old Stowasser Latin-German dictionary. It had been a long time since I’d held it in my hands. Yet there was a time when I worked with it daily as I was studying for the Latinum in my early twenties.

On the first page my dad wrote his name, Helmut Berndt, and the date of his birthday in 1950. Therefore I assume he received this dictionary as a present for this 17th birthday. He would have been about to enter 12th grade. Back then Gymnasium ended with 13th grade. He went to school in Michelstadt, Germany. 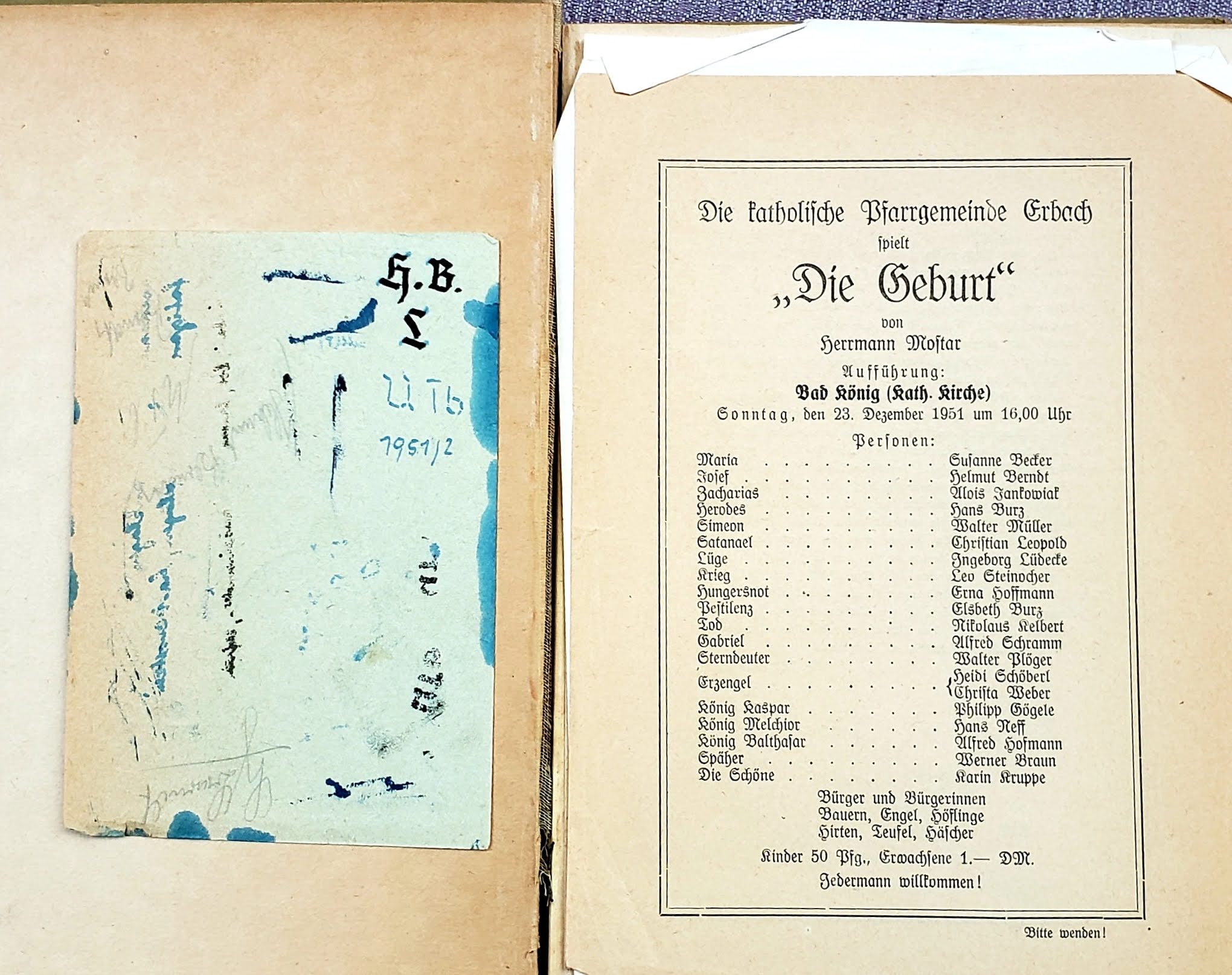 The Stowasser harbors a few mementos from his life as a high school student, such as this blotting paper in on which he practiced his initials, and program leaflets from plays he participated in,

such as this one of a production of Heinrich von Kleist’s drama The Broken Jug. He played the role of the scribe named Licht.

As I was contemplating putting this story together, it occurred to me that it would be great to include a picture of my dad as a high school student.

Sadly, he died in 1985 at age 51 from a massive heart attack, so I can’t ask him about his high school years. But I happened to mention this to my brother, who was just spending some time with our mother, and guess what? He had been rummaging in old photo albums at her place and had come across one our dad had put together of the years 1945-52. Those were dad’s high school years! Here’s what my brother found: 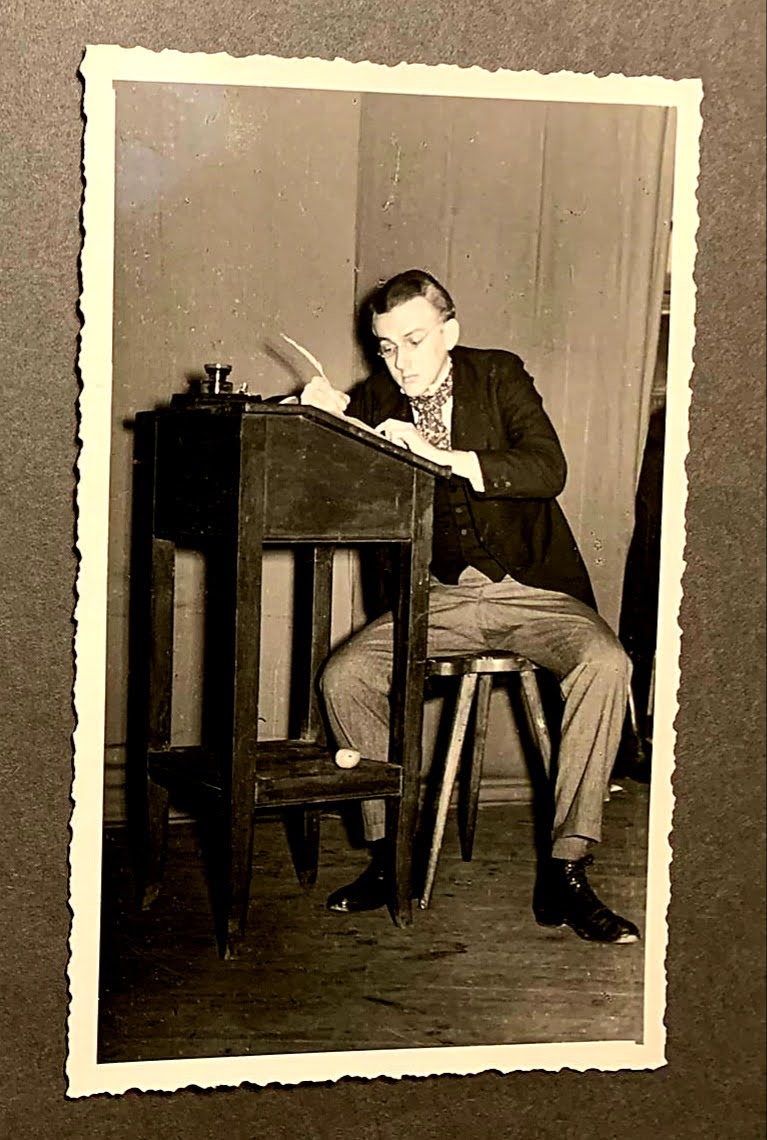 My dad as “Licht, Schreiber” (Licht, scribe) in the production of Heinrich von Kleist’s play “Der zerbrochene Krug” (The Broken Jug) at his high school, Realgymnasium, in Michelstadt, Germany, probably 1951.

Isn’t that picture a hoot?

To do: Get my brother to find a decent picture of Dad as himself as a high school student. (This is in the works.)

Side note on process: Putting a story like this together can be a bit slow, sometimes even frustrating, as you need to ask others to find material. Or you yourself might be trying to find something that would fit so perfectly into the story but you don’t quite know where it is. In that instance, online formats, like this blog post, or even an album you assemble on Shutterfly, are super useful. You can always edit them and add to a story as you come across new material!

Now, on with the story:

My dad had such a hard time studying Latin as a high school student.

For him, Latin had been torture without a purpose as he went on to earn a PhD in Electrical Engineering. Thus, when my siblings and I were in Gymnasium (higher branch of high school in Germany), and the chance was offered to avoid Latin by following the natural sciences course of studies, he enrolled us in that. We had nine years of English, and five years of French in Gymnasium, but no Latin. Instead, we had lots of years of physics, chemistry, and high level math.

Life without Latin in high school worked out fine for my siblings but backfired for me.

When I enrolled at the Ludwig-Maximilians-Universität in Munich, majoring in American Studies, it turned out that the “Kleine Latinum” (equivalent of five years of high school Latin) was a prerequisite for a degree in the Social Sciences (American Studies was one). So, as a university student, I found myself studying Latin in an intensive course to catch up quickly, and I was using my dad’s old Latin-German Stowasser dictionary.

Even while I was suffering through the precision in translation that Latin required, I cherished using my dad’s old dictionary.

I am a bit amazed that he let me use it as I perceive the book as such a treasure. But then again, he hated Latin, so why would he have loved this dictionary?

For me, however, this dictionary is such a treasure trove of information. Now that I looked at the Stowasser again, so many years later,

I noticed that the Latin words were printed using the Latin typeface, whereas the German translations are printed in Fraktur, the old German typeface.

How clever! I am not sure if I noticed that difference when I studied for the Latinum all those years ago. I probably did, but I have always been able to read Fraktur with ease, so I might not have. 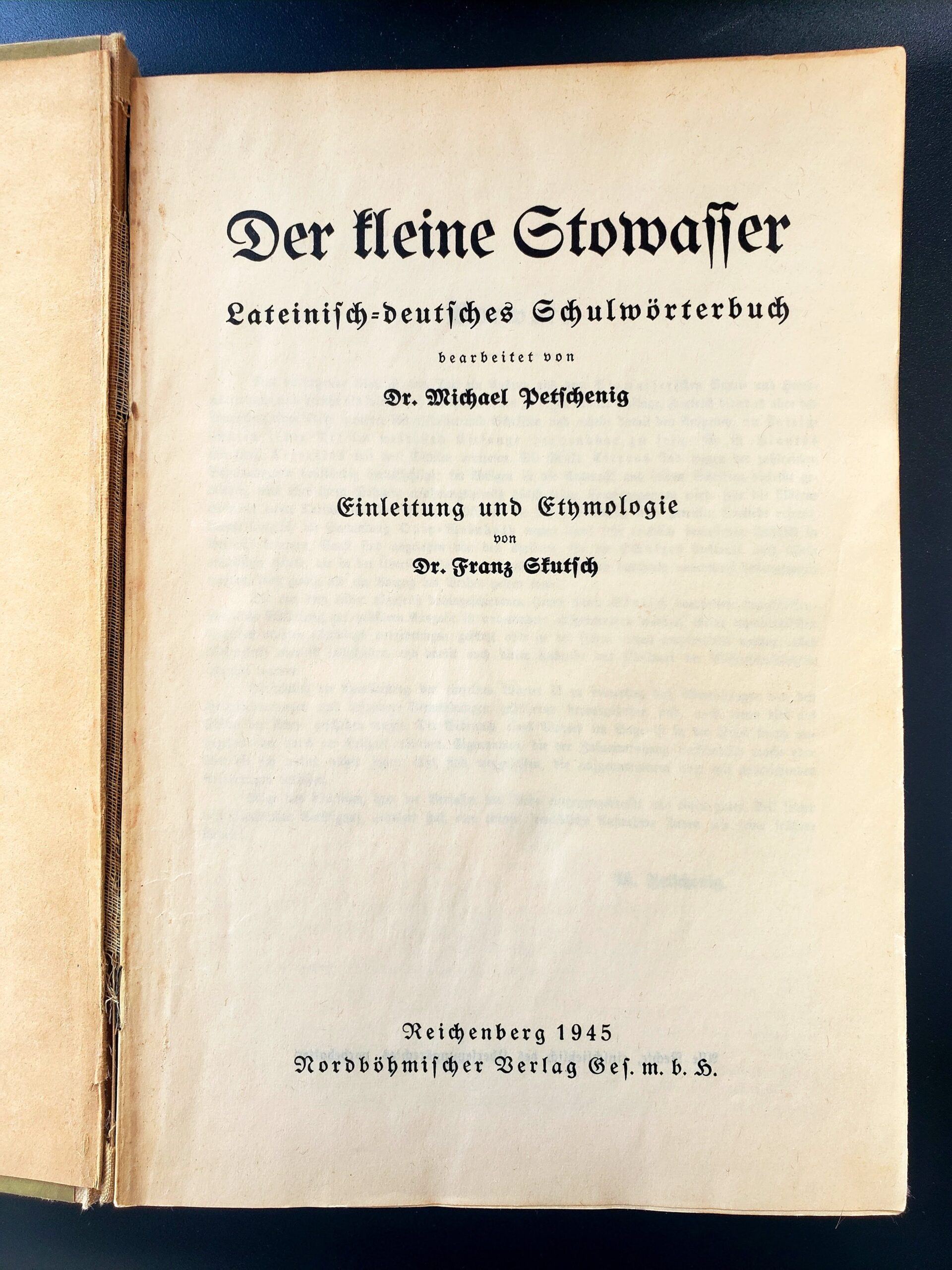 This edition of the Stowasser was published in 1945. The Nazis had officially abolished the use of Fraktur in the early 1940s, supposedly to ease communications with the occupied territories of the “Third Reich.” Nevertheless, Fraktur was still used in print into the 1950s.

I was stunned to find that this volume had been printed in Reichenberg (now called Liberec), my grandparents’ and father’s hometown in Czechoslovakia (now the Czech Republic).

They had been deported from Reichenberg in 1946. (Read the account of their deportation in my story The Flying Dutchman.) Did they take that dictionary along in what little luggage they were allowed? Or did my great-aunt, who remained in Reichenberg, send it to them in 1950 from behind the Iron Curtain?

I can only speculate!