How to Capture Family History in a Book of My Things – Course Countdown: Day 7 – My Great-Aunt Poldi’s Porcelain 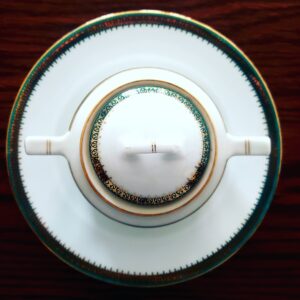 Welcome to Day 7 of my countdown towards my online course Capturing Family History in a Book of My Things, which begins on January 16, 2022. Each day I am sharing a story about a family object, including tidbits of my process putting it together. I hope that’ll give you some ideas and inspire you to come up with your own stories. And of course I’d love it if you joined the course!

Early on, according to my grandmother (Oma from yesterday’s Oriental rug story), the Berndt Family decreed that I should inherit Tante Poldi’s porcelain set.

Why? Because I was the oldest female grandchild of my grandfather, Emil Karl Berndt. He had given this porcelain set to his brother Klaus and his bride Poldi as a wedding gift in September 1921. Poldi and Klaus never had children. This porcelain set, however, “should remain the family,” i.e. the Berndt side, and not go to Poldi’s niece and nephew. They, never fear, inherited Poldi’s condo in Vienna as well as the country cottage in the Wienerwald on the outskirts of Vienna. 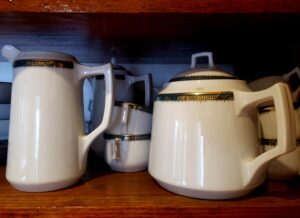 I don’t recall Poldi ever using this porcelain in my presence, probably because it was considered the “good dishes” that you only used for holidays.

Instead, I have vivid memories visiting Tante Poldi (as we called her) on summer vacations at that cottage.

It was amazingly primitive: There was running water in the kitchen, but otherwise the cottage had no indoor plumbing. We had to use the outhouse–a somewhat spooky adventure for us kids!

Poldi also had no fridge in that cottage. Instead, she kept milk, fresh from a neighboring farmer, in a shallow pan in the cool root cellar. That way you could easily skim off the solidified cream on top. That milk tasted disgusting to me! I was used to pasteurized cold milk from the fridge. Plus it was way too fatty for me, even with the cream skimmed off.

At that cottage, Poldi had a huge kitchen garden. Every year, she made jam from all her fruit and berries.

Jars of her jam, labeled in her handwriting, were a mainstay in every relative’s pantry. From her labels I learned Austrian words for various foods that were different from the German ones I knew. Red currant jam, a favorite for its tartness, would be labeled “Ribiseln.” In German red currants are called “Johannisbeeren.” 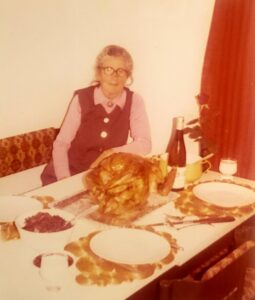 Tante Poldi (Aunt Poldi) on a visit with my family, Schäftlarn, Germany, mid-1970s

Note on process: Somewhere in the family archives there are lots of photos of us staying at that cottage. Unfortunately I can’t put my hands on any of them now. I’ll have to bother my brother to dig them up. In the meantime, I did find the above photo of Tante Poldi visiting us in Germany. An occasion at which my mom served a gigantic turkey, which was quite the American thing to do.

Poldi (left) with her sister-in-law Resi (a main character in my memoir Jumping Over Shadows), and Resi’s children Herta and Ludwig (front), 1933.

I also have the above photo of Poldi from 1933. However, I don’t know where it was taken.

Given that Klaus and Poldi bought their cottage in 1931, it could very well be on that property. I do recall a forest on top of the hill. Poldi was from Vienna, where Klaus served in the police force until he was forced into retirement by the Nazis. According to my grandfather’s memoirs, Poldi wasn’t too thrilled when Klaus insisted on buying the cottage. As World War II raged on, however, it proved to be a lifesaver: Their apartment in Vienna was hit by a bomb when they were, thankfully, staying at the cottage. They spent the rest of the war and probably a few of the postwar years living there until they could afford another place in Vienna.

Poldi’s full name was actually Leopoldine (the female version of Leopold) but no one called her that.

Born in 1897, she was already an old lady when I knew her. In fact, I always marveled at how old she was, contemplating the many years she’d already been on this planet. What a kid point-of-view!

Poldi died in 1982 at age 85, so she wasn’t that ancient. Upon her death, my dad and I drove the six hours to Vienna to fetch the porcelain. I recall our trunk rattling with the dishes on the way back. When I moved to Chicago a few years later, I of course took Poldi’s dishes along. 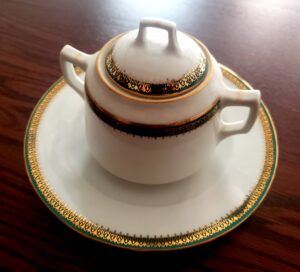 I pretty much use the porcelain the way Poldi did: for holidays and special occasions. Main reason: You have to wash it by hand!

Otherwise, its gold rim would get ruined over time. I love gold-rimmed dishes. In fact, I have another gold-rimmed everyday set that I do put in the dishwasher. I don’t care if that rim washes off. Poldi’s dishes, on the other hand, are an irreplaceable heirloom.

My grandmother always impressed upon me that this was special porcelain, “Thunsches Porzellan,” as she would say.

I love that the emblem on the back of each piece not only identifies it as “Thuny,” which I assume was the brand or series back in 1921, but lists “Czechoslovakia,” a country that no longer exists. I used to think that this manufacturer no longer existed either, but it turns out it does:

From the site Kovels, in response to someone else’s question about porcelain marked “Thuny:” Your china was made by Count Thun’s Porcelain Factory in Klosterle, Bohemia (presently Klasterec, Czech Republic). The factory was founded in 1794 by Franz Joseph Thun and J.N. Weber. It was nationalized after World War II and several changes in ownership followed. This mark was used from 1918 until at least the 1980s. […] The company is still in business, now known as Thun 1794 a.s. and claims to be the largest producer of Czech porcelain. You may be able to complete your set through the company or through a matching service.

Poldi’s porcelain is 100 years old, and it is very much a sign of its time.

I always liked its elegant but understated art deco design and gold and green pattern. I would have been less inclined to set my holiday table with something more ornate. But Tante Poldi’s Geschirr (dishes), as we say, still reliably graces our table on special occasions and holidays.