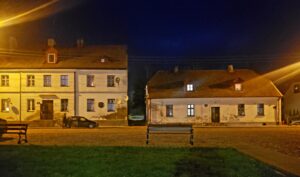 Meet the town of Tykocin in northeast Poland, a shtetl if there ever was one.

Tykocin is pretty much as it was in August 1941, when German Einsatzgruppen obliterated its entire Jewish population of about 2,000 people by shooting them into massive pits dug out in the adjacent forest of Lupochowo. They murdered them after inflicting all kinds of cruel humiliations on them. Hearing about those does me in. 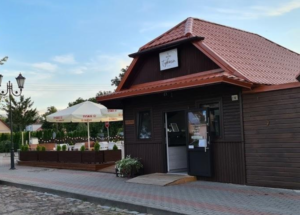 In the town center, the wooden Jewish market stalls still stand. One is now a mini bistro. (When we stopped by, it was too dark for me to take a decent photo.)

Tykocin Synagogue from the outside

The stately Tykocin synagogue is one of the few Polish synagogues that survived World War II. 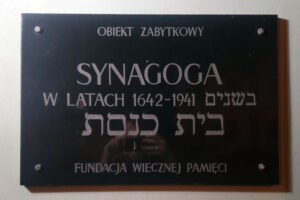 Plaque on the outside of the Tykocin Synagogue

Built in 1642 to replace a wooden structure, the Tykocin Synagogue is truly a solid testament to centuries of Jewish life in Poland. The Nazis “only” desecrated it, using the sturdy, spacious building as a warehouse.

After the war, it served as a fertilizer warehouse until it was restored in the 1970s. 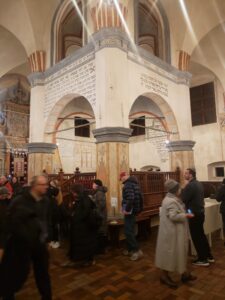 The Bimah, where the Torah is read, is in the middle of the building and an integral part of holding up the roof. 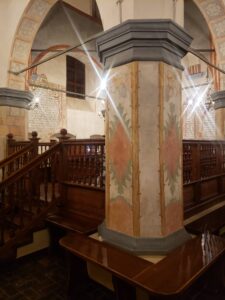 The Aron (behind the candelabra), where the Torah scrolls would have been kept.

The Tykocin Synagogue is now a pristine museum.

When we visited, the exhibit “The Image of Treblinka in the Eyes of Samuel Willenberg,” one of the few survivors of the extermination camp of Treblinka, was on display. Willenberg’s story and the bronze sculptures he created capturing his experiences foreshadowed the stories we were going to encounter as our tour progressed to sites like Treblinka.

And yet, one could sometimes find bizarre humor in Willenberg’s stories, such as this one of the “Scheisskommando” at Treblinka.

Proof, perhaps, that life is always multifaceted, even, for a few moments, in the inferno of Treblinka. 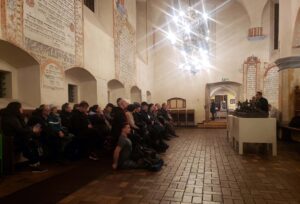 We held a short evening service at the Tykocin Synagogue. We, the Jewish people, are still around. The Jews of Tykocin and their descendants are not. Thus it is important to show up–hard, heavy, and eerie as it is.

Trace of Jewish life on a random door in Tykocin

Then we visited the mass graves in the Lupochowo forest in the damp night of November.

The dark felt appropriate, even though the execution of Tykocin’s Jews in this forest happened in the light of summer. Because we were there in the dark, carefully trudging along the mud path through the forest by flashlight, I have no images of this site.

Between the grave pits, which are just marked-off clearances in a dense pine forest, our guides had set up candles in the shape of a star of David. We listened to the harrowing story of what had happened to those buried there. We sang HaTikvah (“the hope,” Israel’s national anthem), there in the dark, while those few candles flickered, and that felt meaningful. Bearing witness by visiting these graves.

Standing at the edge of such a mass grave is of another gravity than standing at the site of the barn massacre in Jedwabne, if that’s even possible.

Our guide read us the lyrics of the song “Lirot et HaOr” (To see the light). Poetry, music, and art are, I’d wager to say, the only way to get close to capturing the emotions visiting such a site brings forth, let alone doing justice to its legacy or the event itself.

I have been listening to that song ever since.

I saw my path disappearing
Into a tangled forest
Within walls of the undergrowth
Into the bleeding ground
My feet were planted, growing roots

I felt drops of rain
Collecting inside me, falling under me
And the wind is cold and depressing
It freezes me, depresses me

I fell to earth, in quiet
I shut my eyes, closed my heart
And I felt that I was stripped of
All my pains, all my loneliness