Sharing Impressions from an Epic Trip to Peru Last Year: A Sand Storm Threatens a Flight over the Mysterious Nazca Lines

On our trip to Peru last year, we first traveled south, past all the depressing shanty towns of Lima, mainly to see the pre-Columbian Nazca Lines.

This post continues my series celebrating the trip to Peru I was fortunate enough to undertake with two of my kids last summer.

The current difficulty of travel due to the Coronavirus Pandemic has made me realize, even more than before, that I am a traveler at heart.

Four months into travel not being a thing, I am getting antsy. The only way I can assuage that feeling is to relive, honor and celebrate old trips. Plus this downtime from travel is the perfect time to assemble some of what I brought home. Since the trip to Peru happened at this very time last year, I thought I’d celebrate that one first.

The Nazca Lines are a set of giant geoglyphs in the Southern desert of Peru.

It basically never rains there. The area’s extreme aridity preserved these markings that an indigenous people etched into the ground some 2000 to 1500 years ago.

By the way, a geoglyph is a marking on the ground, as opposed to a petroglyph, which is etched onto a rock.

I’ve encountered plenty of petroglyphs on my travels. The furthest back I can remember is my dad schlepping us kids to see petroglyphs in the south of Sweden. Geoglyphs, however, were a new discovery for me. 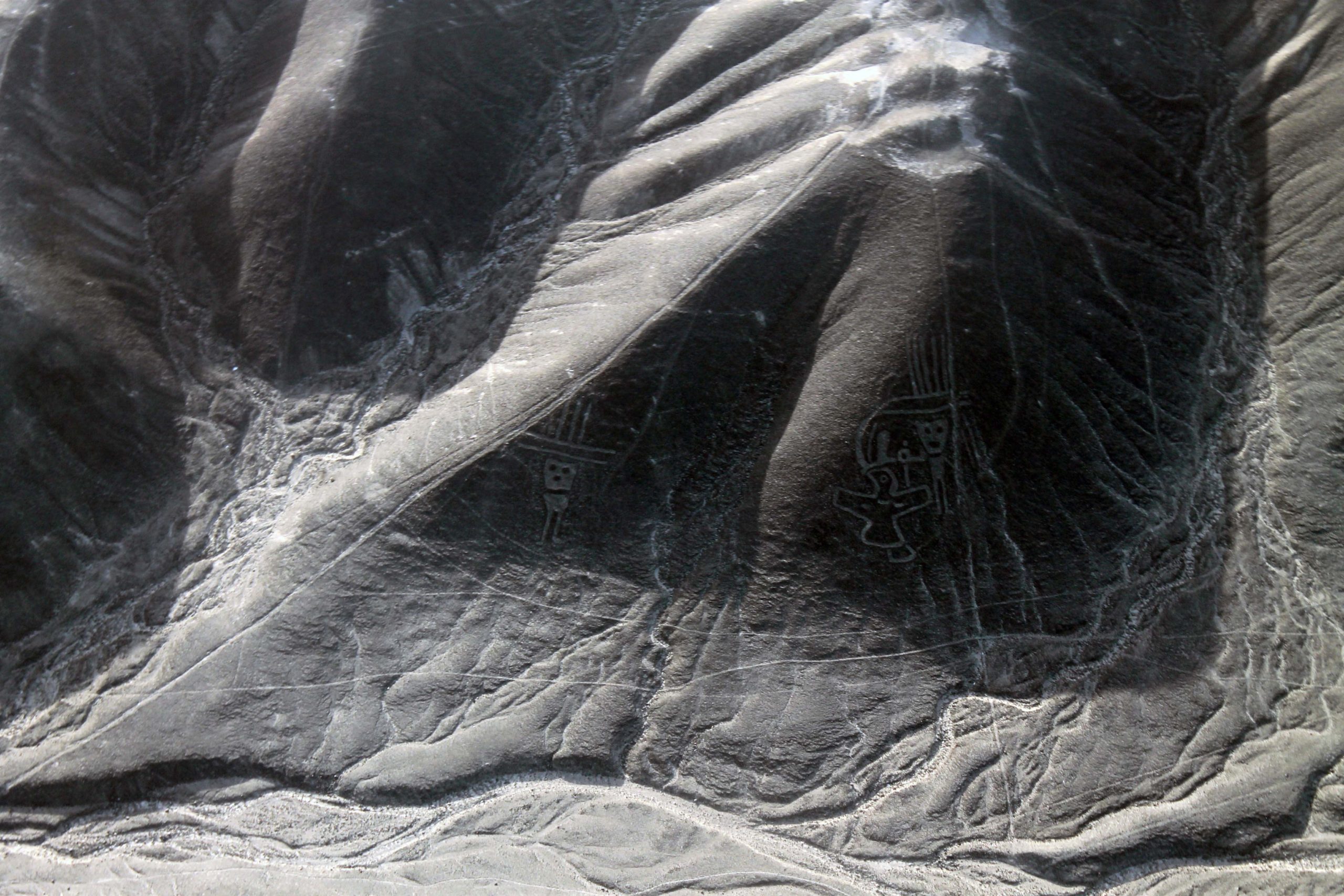 To this day, the purpose of the Nazca Lines is unclear.

Theories range from them being celestial markings, to ritual way signs, to water-related ritual sites. The Nazca Lines include straight lines, other geometric forms such as the spiral in my title image, as well as depictions of figures, animals and mythical creatures.

The Nazca Lines are so large that one can only fully appreciate them from the air.

That’s why we were booked on an afternoon tourist flight. Their size and visibility from the air only might also be another reason they might have been preserved for so long: They didn’t draw attention to themselves. They are also in a low-traffic and habitation- and agriculture-unfriendly area of Peru. Not until the 1930s did pilots begin noticing these huge markings on the ground.

Our travel agent had been worried that weather conditions, i.e. a choppy Pacific Ocean, might hamper our excursion to the Ballestas Islands, planned for the next day. However, it was our flight over the Nazca Lines that almost got derailed. 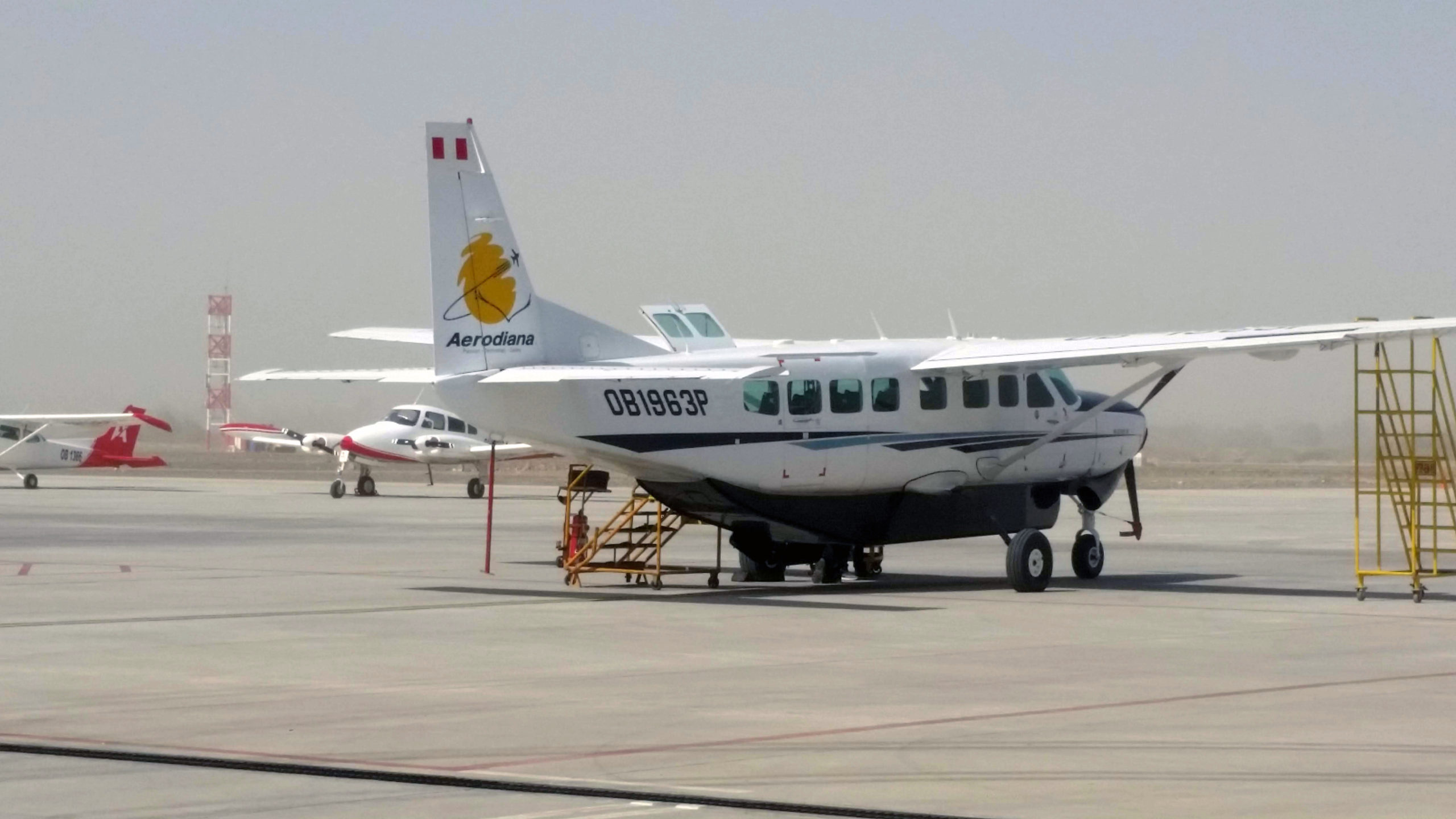 We were booked on a 2 p.m. flight. First it was first delayed to 3 p.m. due to a sand storm over the desert.

Sand storms make flying dangerous, but they also make it impossible to see the Nazca Lines. In the image above you can see the storm’s dust obscuring the horizon.

At the airport we had a further delay but then we were asked to board. Once we were all seated and ready to go, the pilots got a ground stop signal. We all had to disembark and wait in the terminal. This gave us a chance to fully appreciate this new airport on Pisco.

It looks like a decently sized regional airport in the U.S., with perhaps ten gates. However, the only flights coming and going were those 12-seat tourist flights over the Nazca Lines. Given all the Chinese advertisements in the terminal, I was wondering whether this was another case of Chinese investment in developing countries that is catering to something that isn’t quite there yet, namely sizable air traffic.

We ended up waiting for another hour. Our hopes kept sinking that we’d ever get to do the flight. Was our reason for coming south going bust? 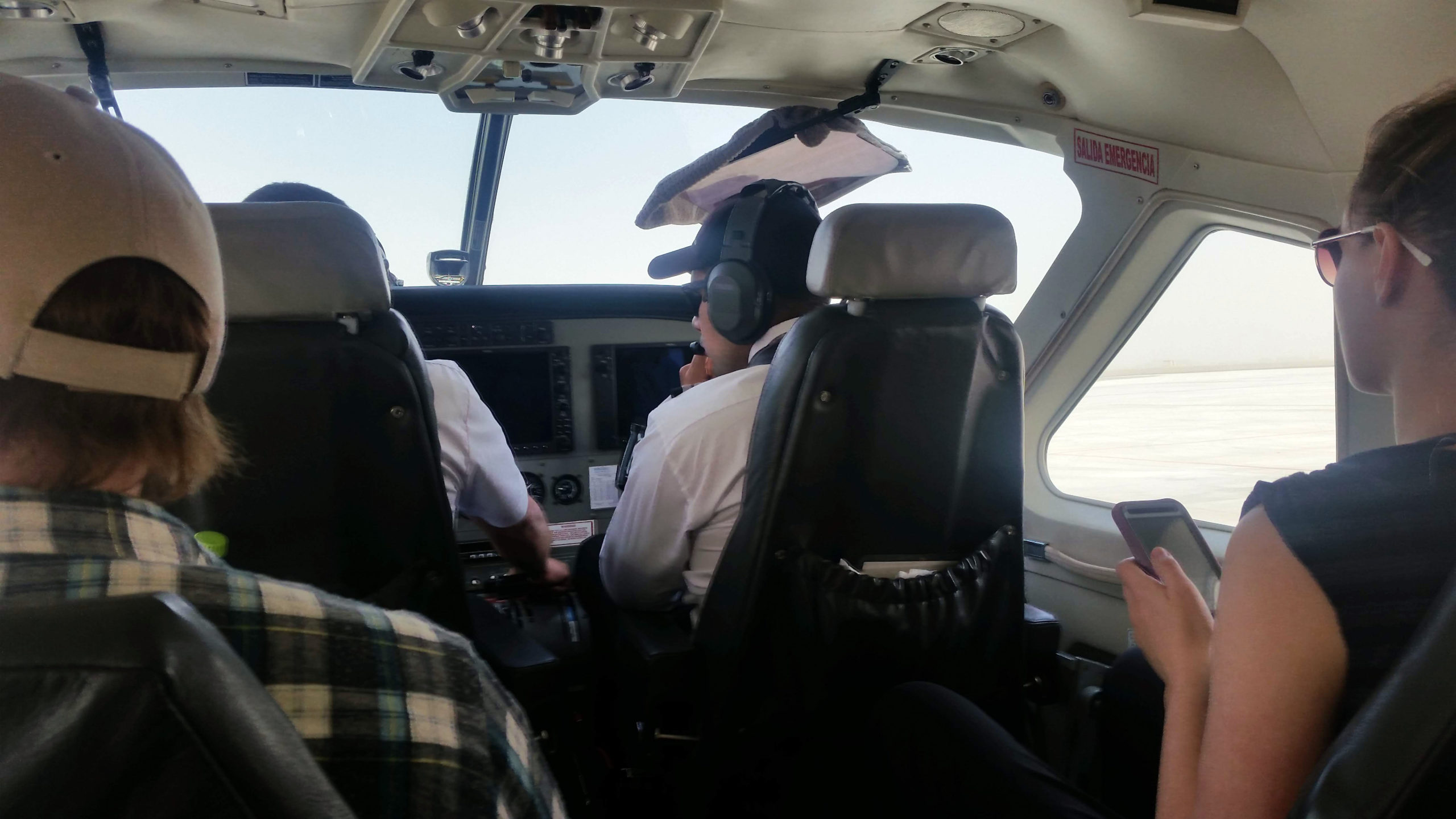 Thankfully, at about 4:30 p.m., the flight operators got the OK. We boarded again and finally took off. I have flown a lot over my lifetime but being in such a small plane, right behind the pilots, was an extra thrill for me.

Beware, however: This flight is tough on the stomach, even for people like me who don’t get motion sickness.

My daughter popped a Dramamine beforehand. She struggled, but fortunately she got through the flight without mishaps and even enjoyed the sights. 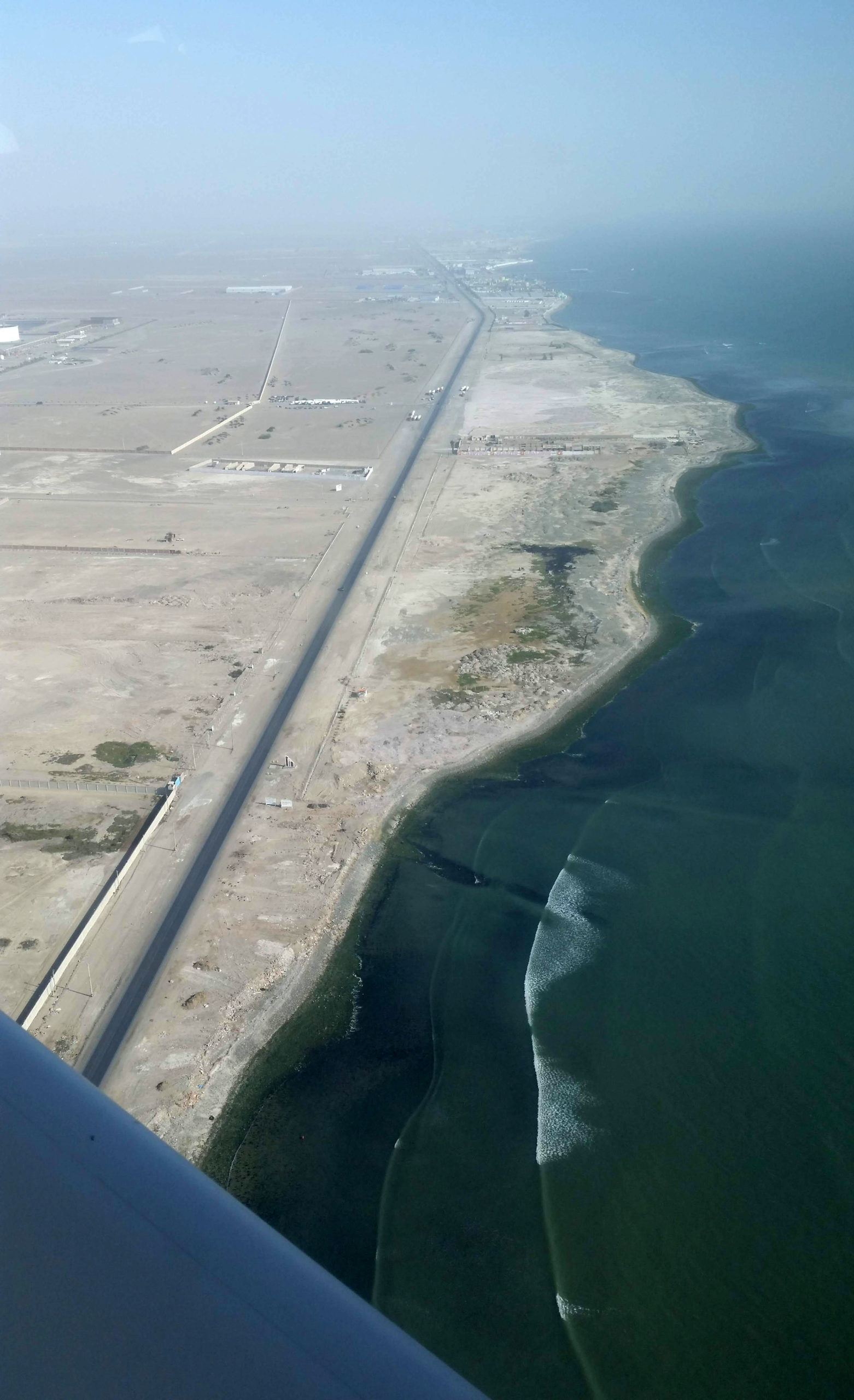 Here’s a view of the coast line and the Panamerican highway. 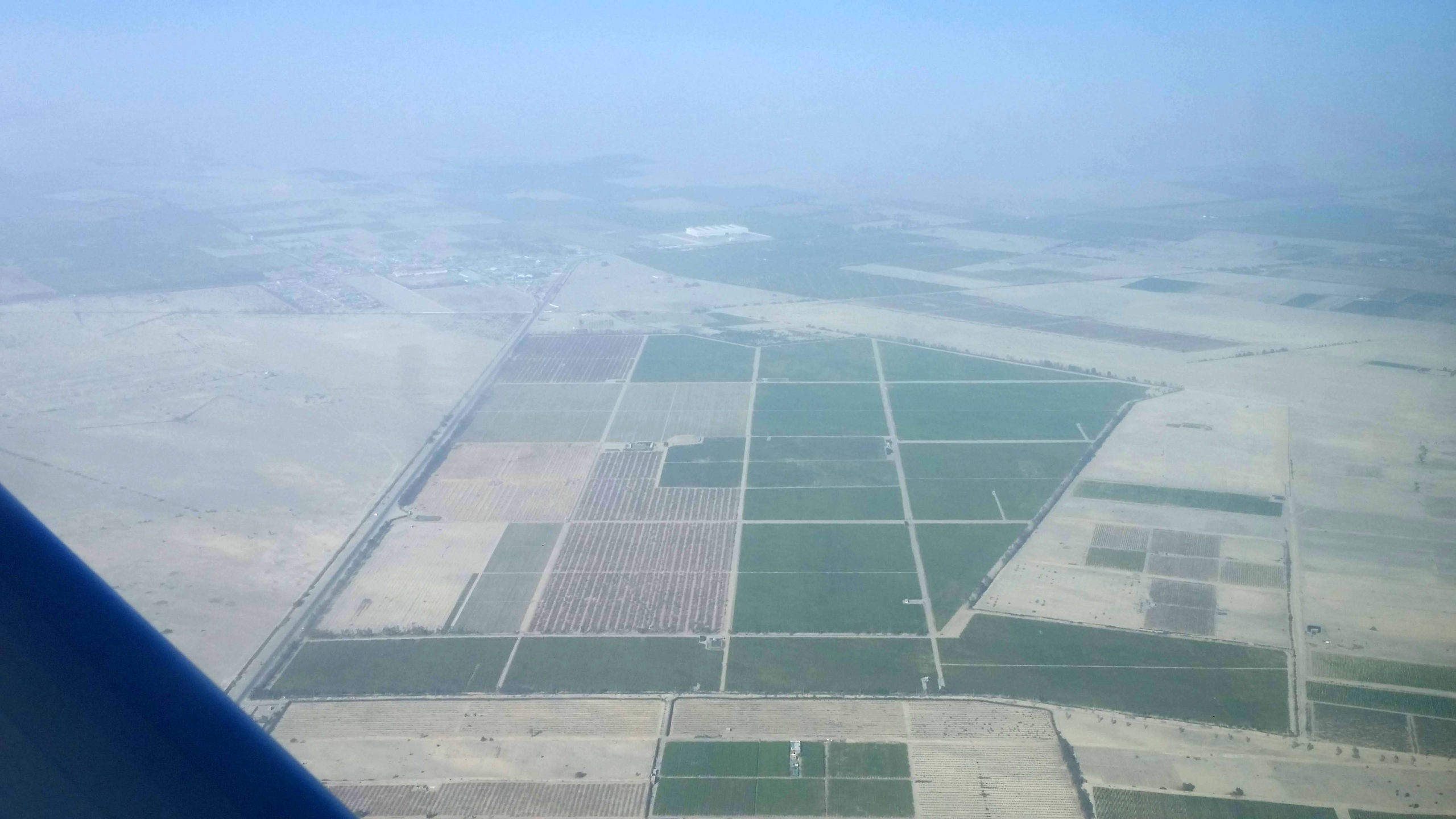 You can see how the landscape is just sand except for the irrigated fields people have carved into the desert. 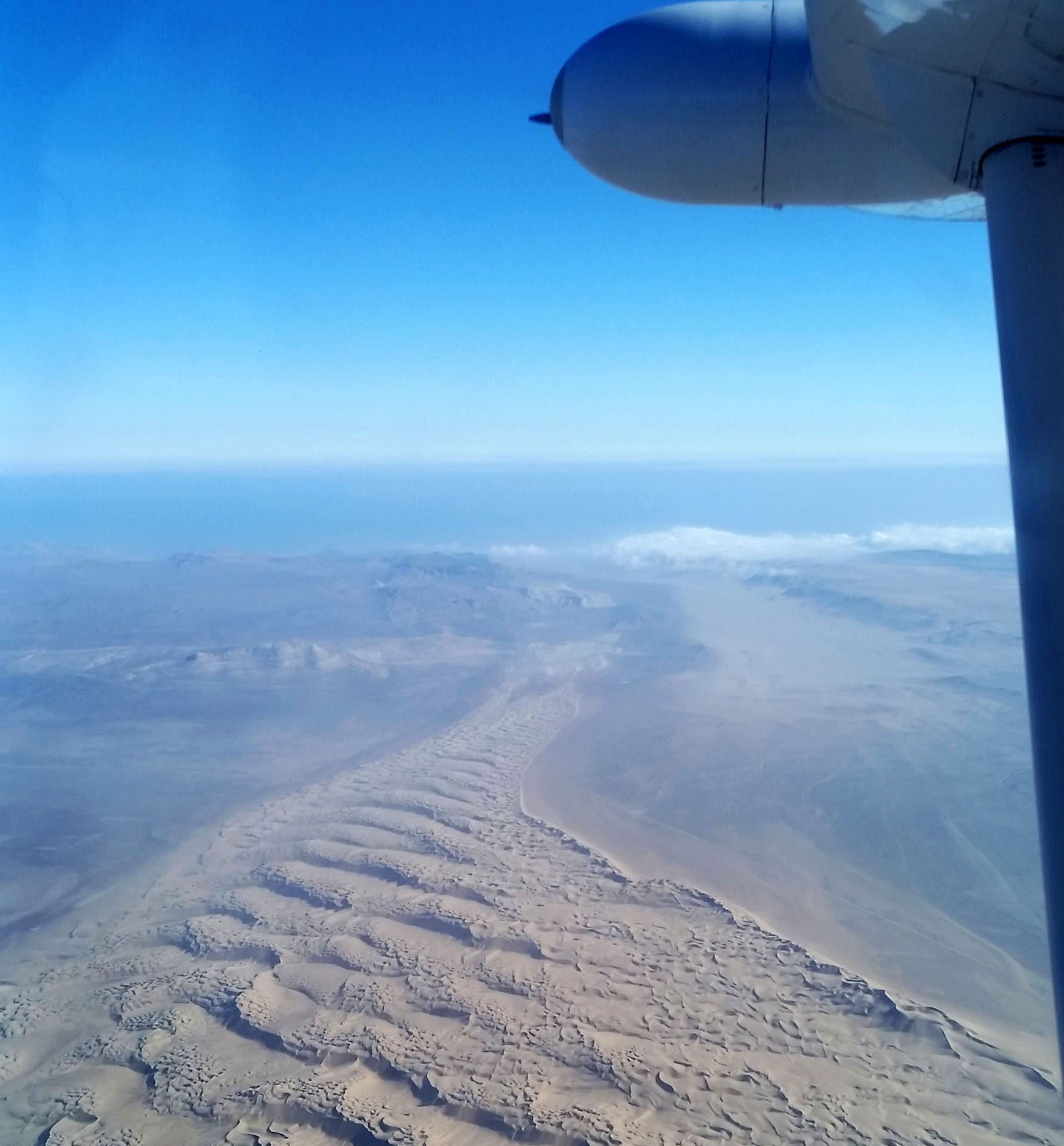 Since the coastal plain is fairly narrow, one can see the Andes looming on the horizon as one flies along. The Nazca Lines are a roughly 30-minute flight from the Pisco airport. 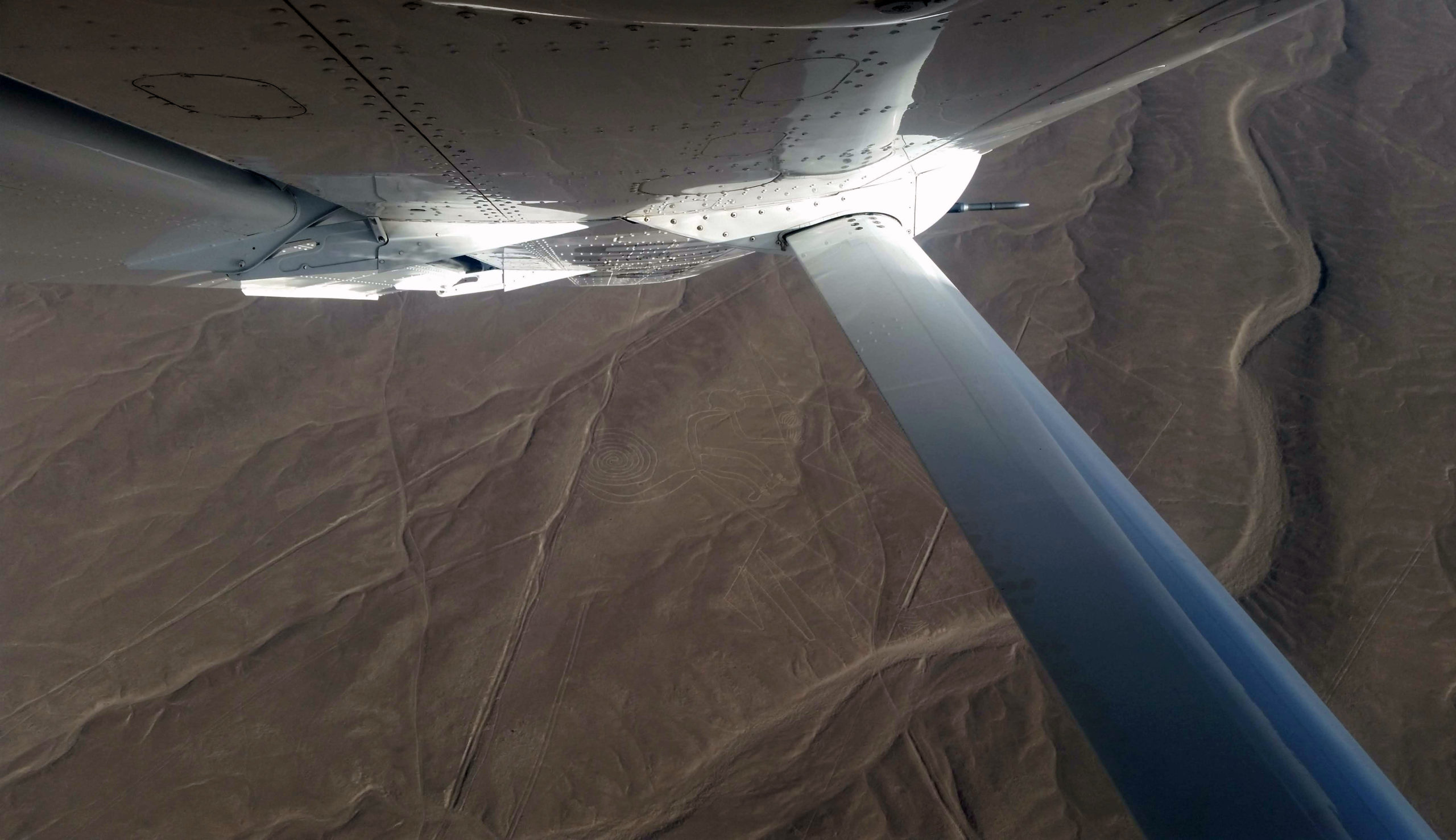 See the spirally design on the ground? That was first discernible Nazca Line! It’s part of a figure called the Monkey.

Once the plane reaches the Nazca Lines, things move fast. The pilots dip the wings sharply down to one side, then circle around and dip to the other side, so that passengers on either side of the plane can see the figure on the ground.

That meant we were basically on a roller coaster ride up in the air, holding on to our seats for dear life.

All the while I was trying to make out what I was supposed to be seeing on the ground. And if you’re me, you’re also wielding a camera, trying to get a good shot of each Nazca geoglyph. All the while your stomach is lurching around! 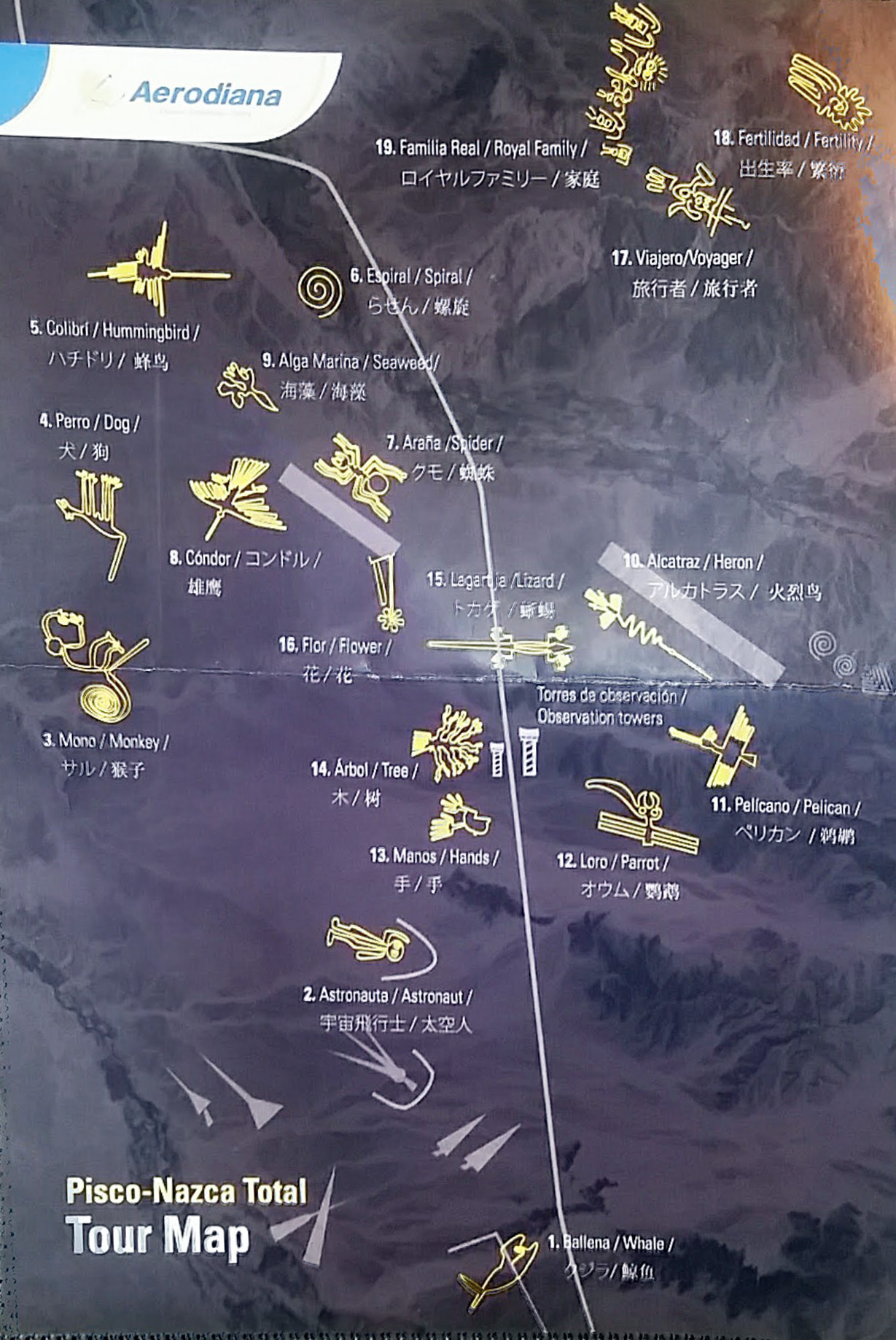 Without this helpful map, I’m not sure I would have made out half of what I was supposed to see. 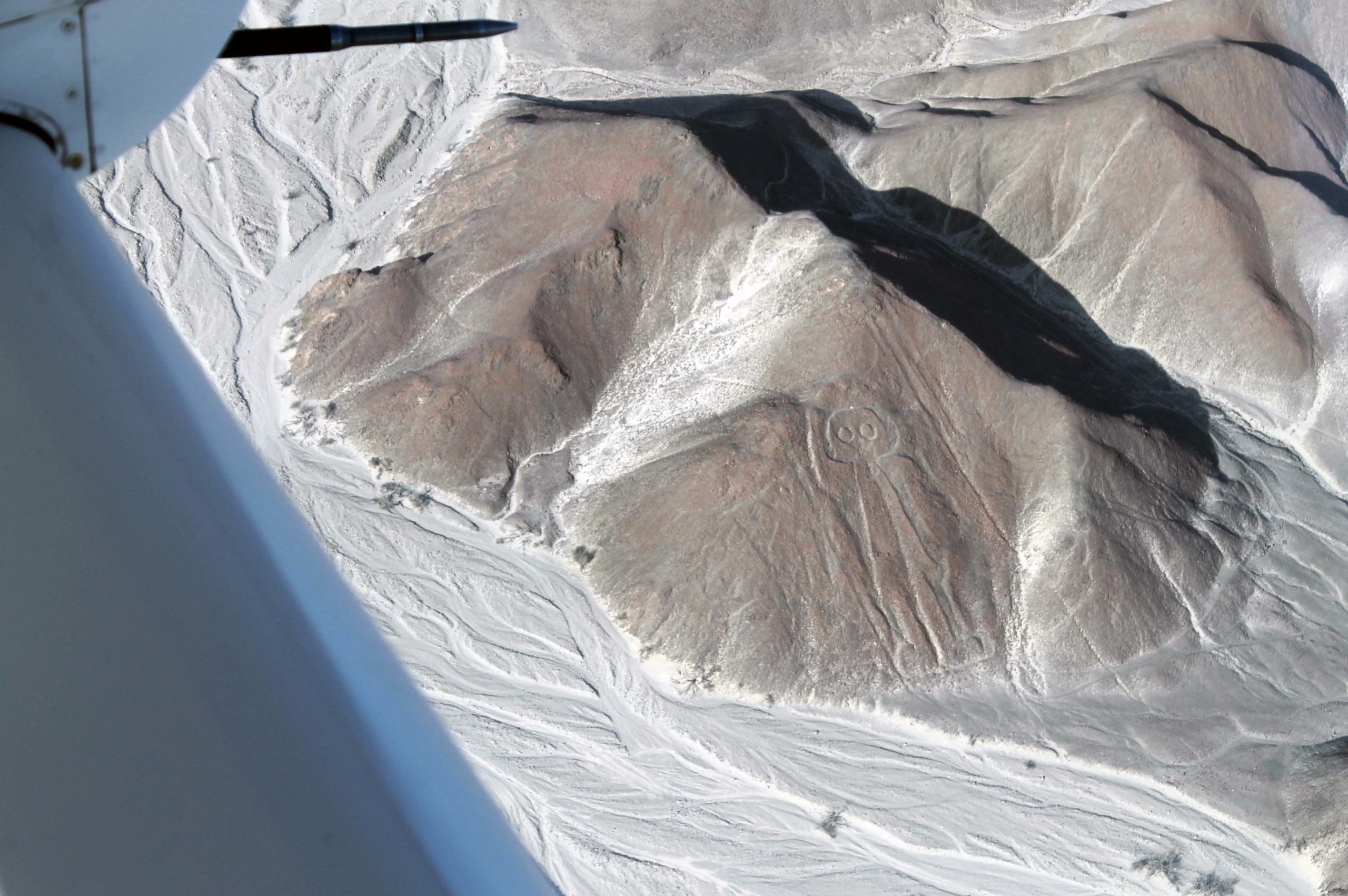 This waving figure (his right arm is raised) is probably my favorite.

Maybe because he was the first one I could fully spot. He’s called the Astronaut. Isn’t he just jolly? 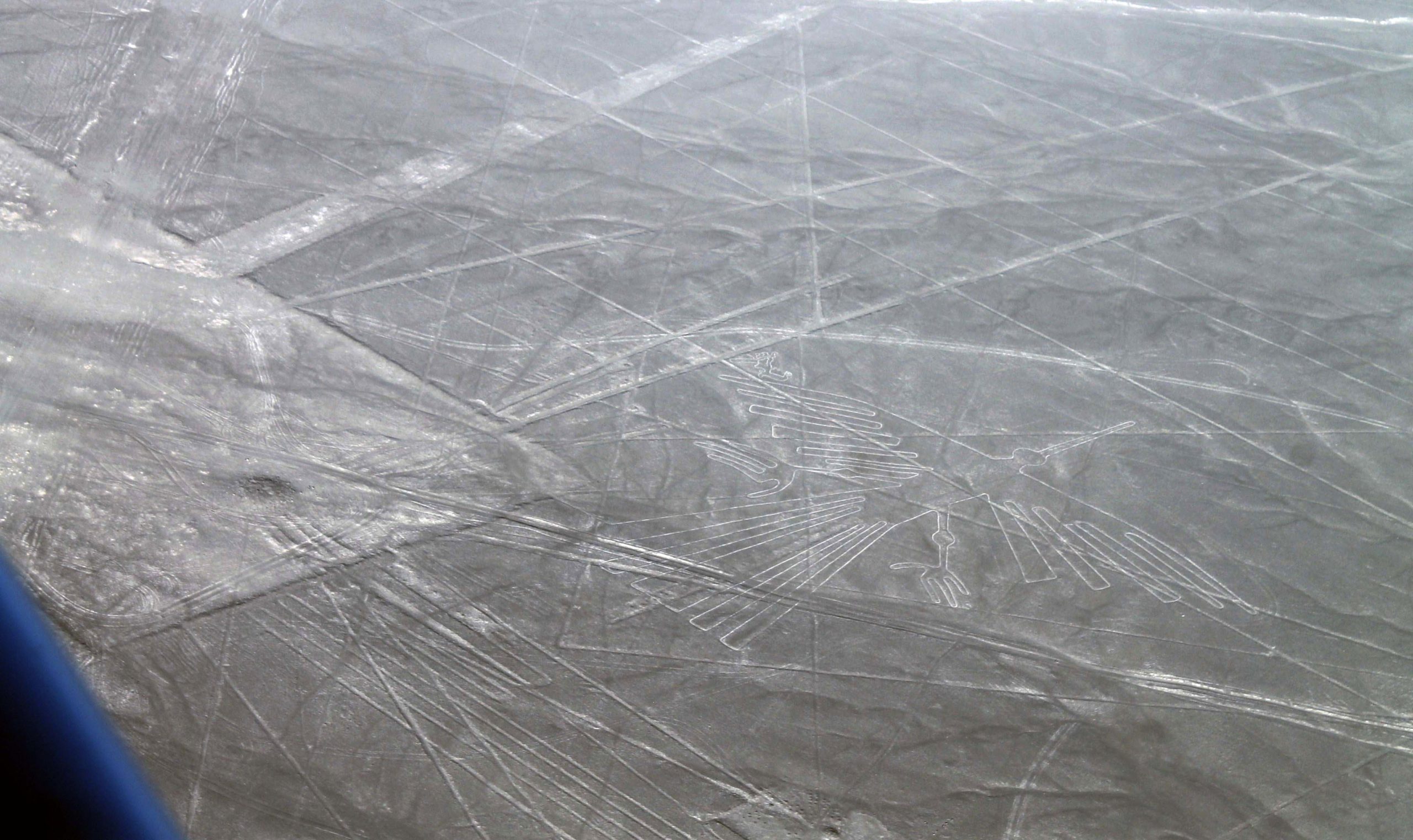 Here’s the Condor surrounded by lots of other etched lines. This struck me as looking like an ancient airport’s landing signage.

I couldn’t help but wonder if we were looking at extraterrestrial markings.

The Nazca Lines were made by removing the top layer of sand. This exposed the next deeper and differently colored layer of sand. The Lines could be easily washed away but since it never rains here, they are still around! 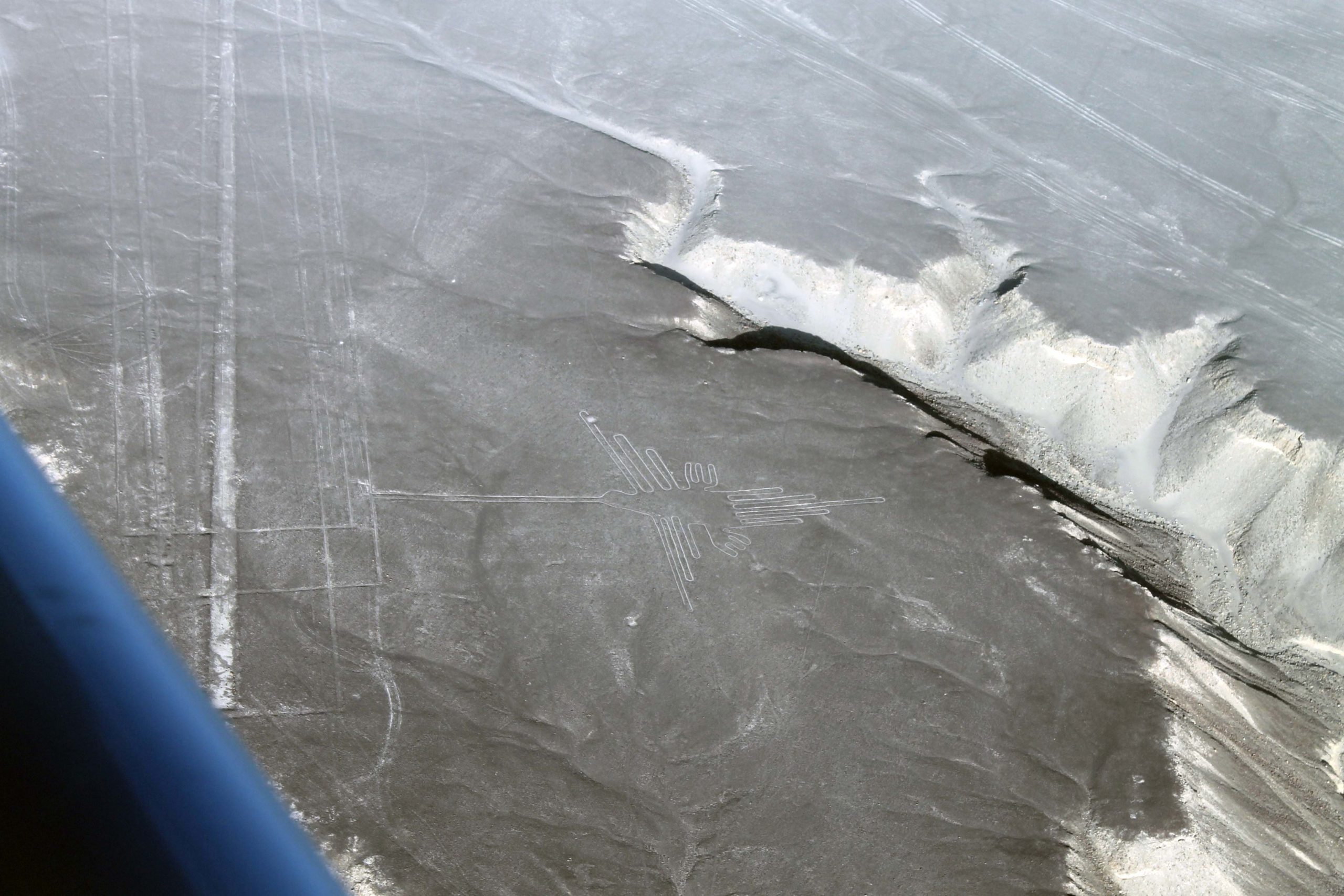 This is the Hummingbird, next to another set of lines and a ravine. 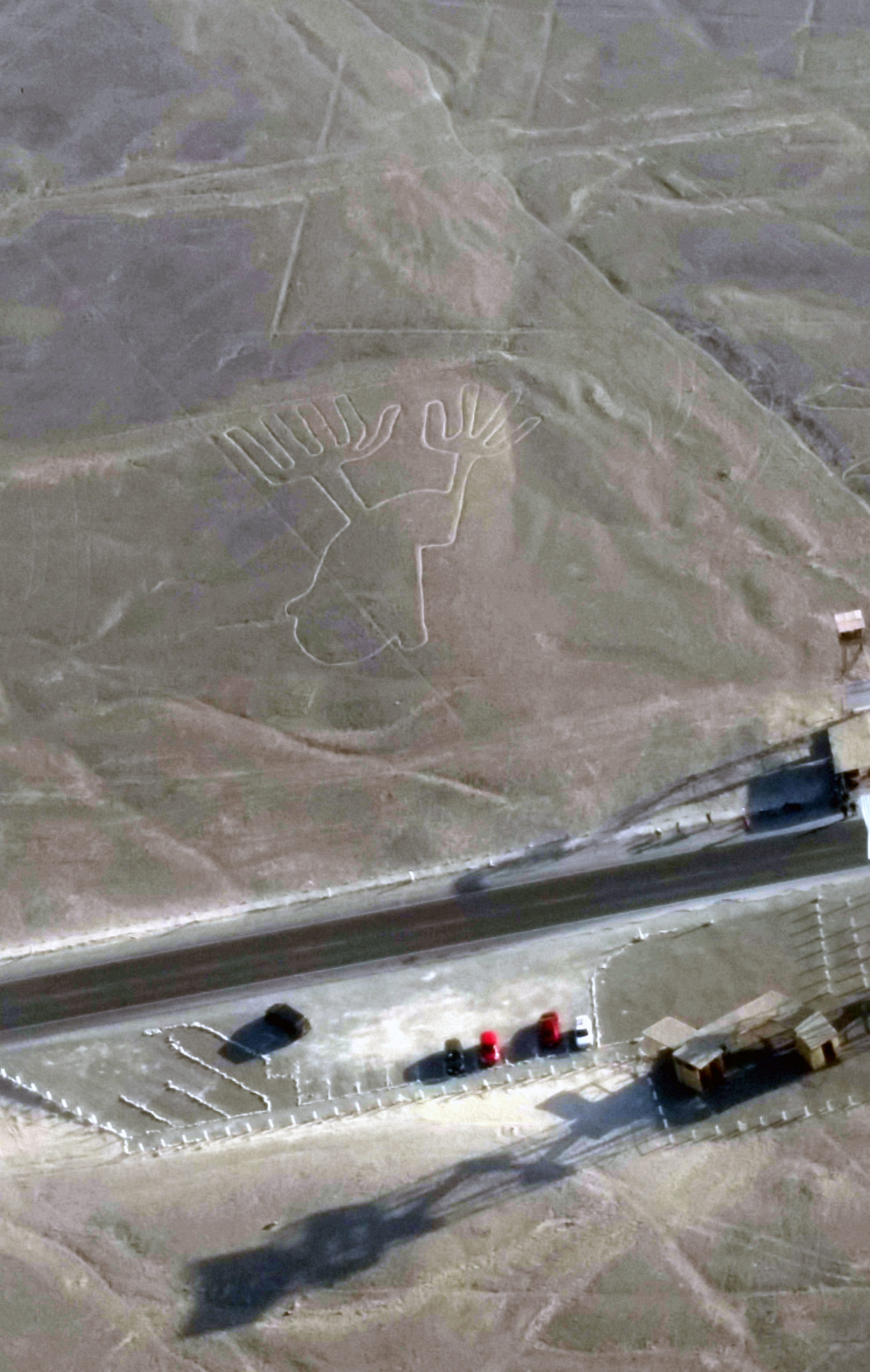 I was also amazed to see how close these ancient geoglyphs are to modern day life. Here it’s the Hands next to a highway and parking lot. 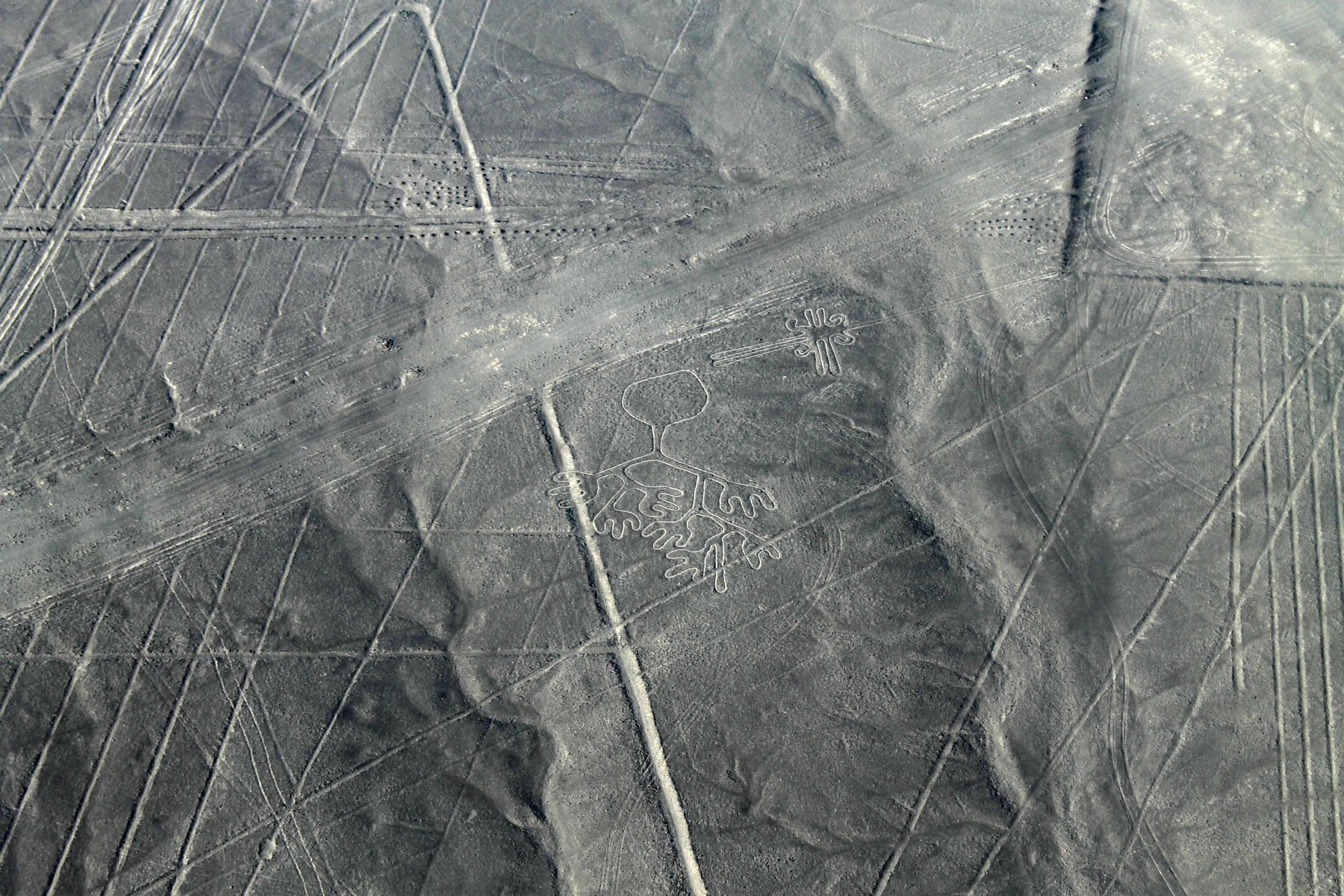 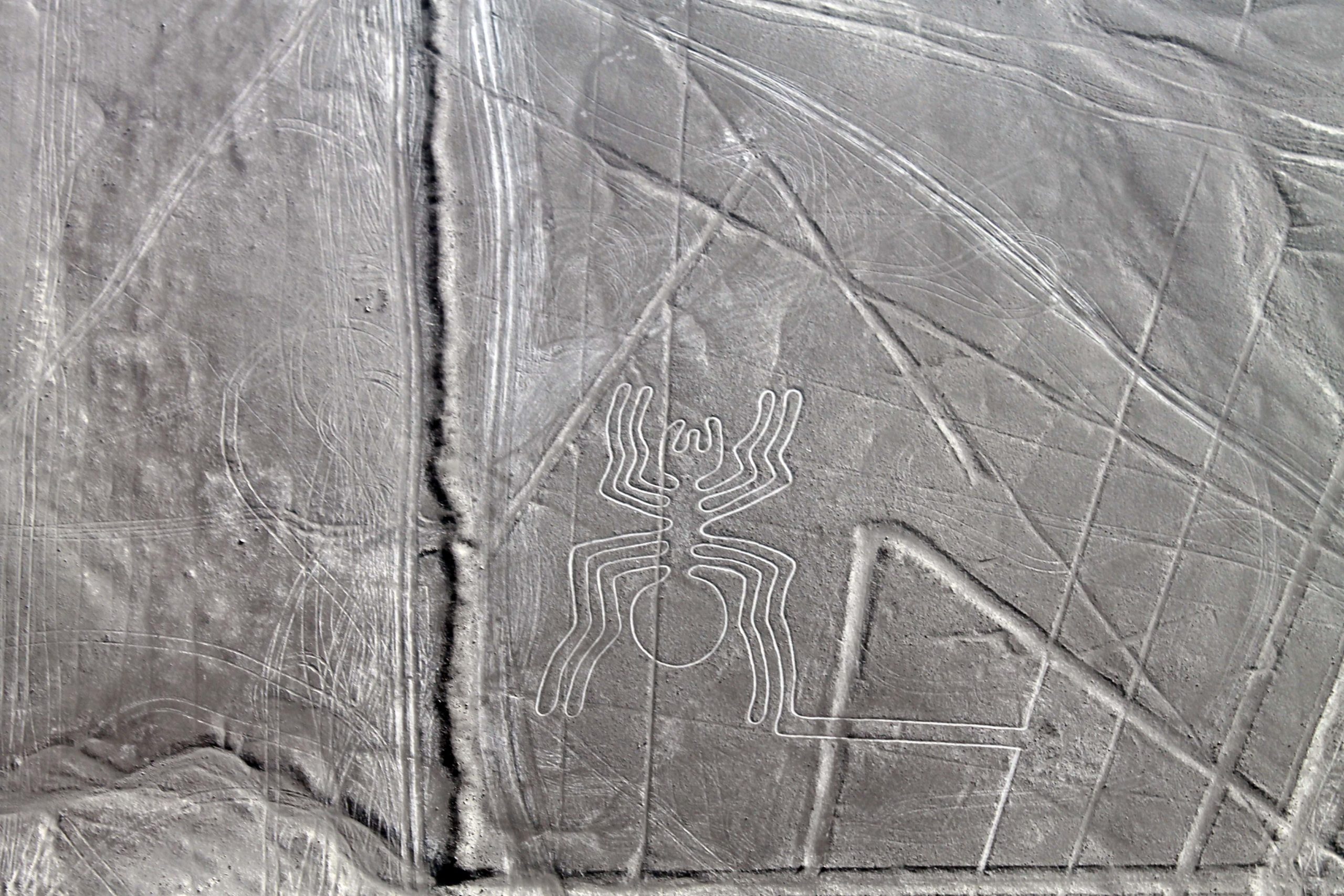 I was fortunate to get a terrific view of some of the Nazca Lines, such as the Seaweed (on top) and the Spider (above).

Here’s a close up of the spiral, with which I began this post. 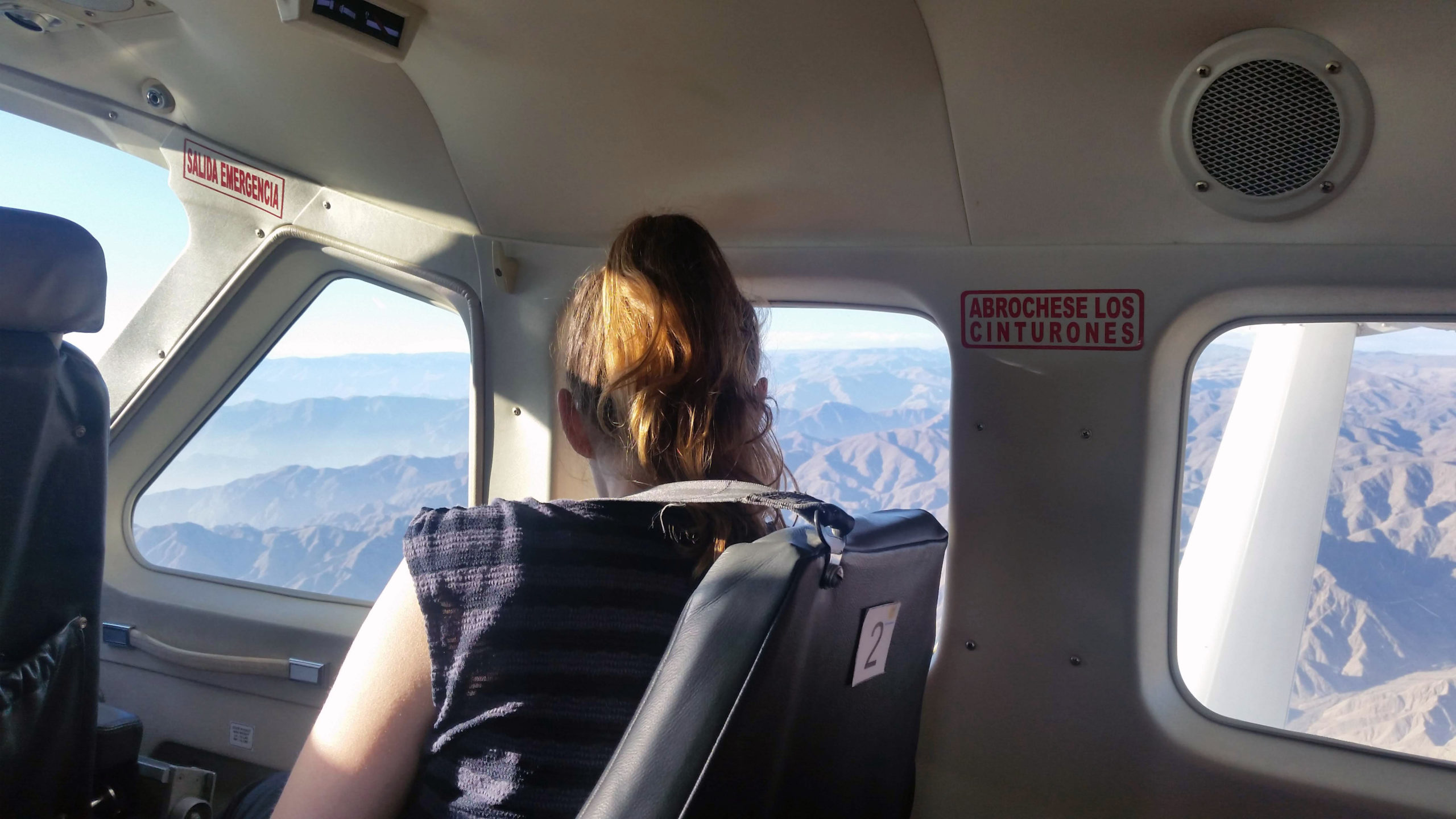 Overall, this made the Nazca Lines more visible. On the return flight, we enjoyed a gorgeous view of the Andean foothills bathed in the golden light of the setting sun.

Modern landing strip in sight! Of course I loved the whole flying experience!

Next up in my Peru series: Lima itself.