Come Along on a Virtual Tour of the Ballestas Islands, whose Atmosphere is More Striking than that of Famous Machu Picchu 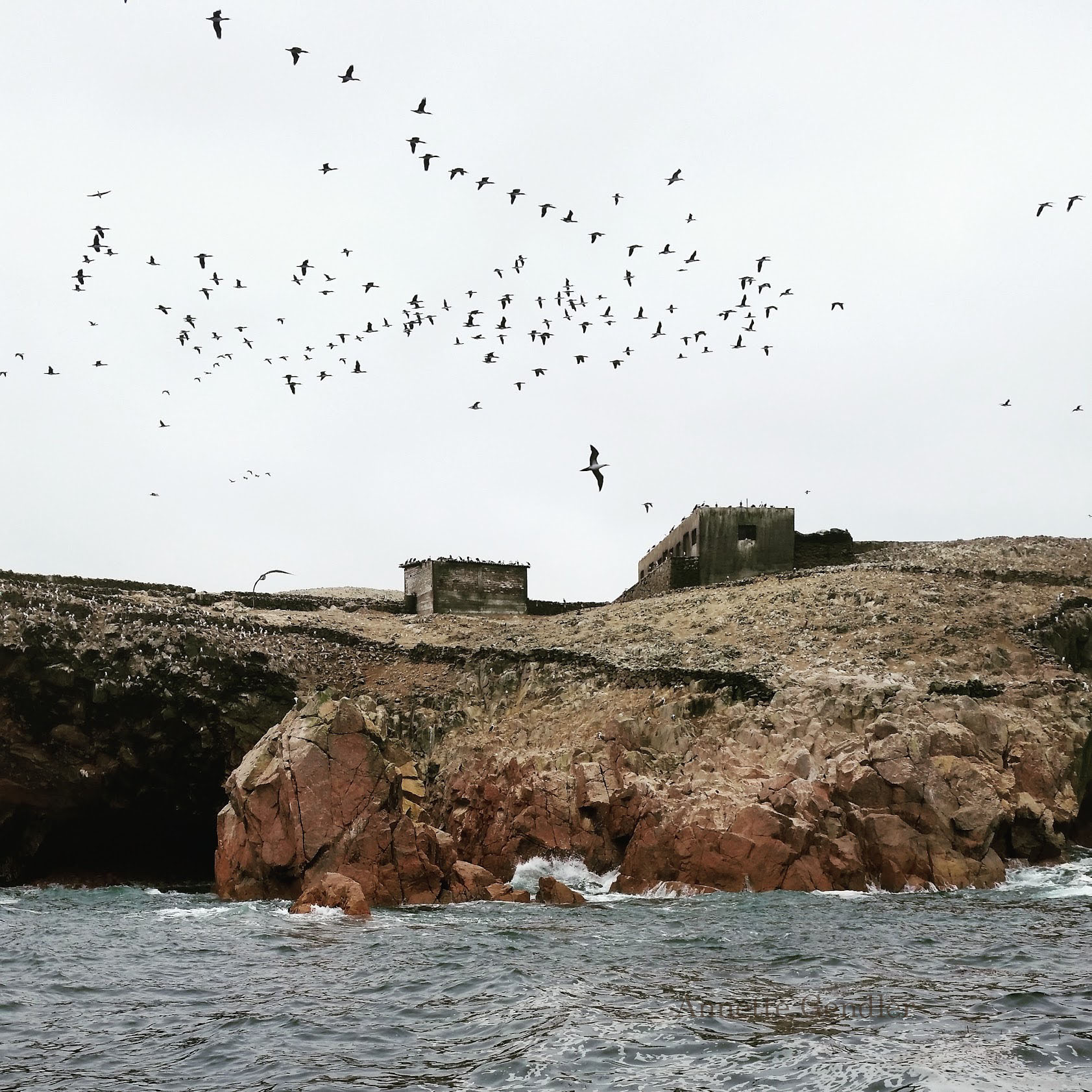 Whenever I think of the Ballestas Islands, I see this image in my mind. It is my favorite photo of our entire trip to Peru.

As we are into our fourth week of stay-at-home orders in the U.S., and my friends and family around the world are suffering the same confinement,

I am ever more thankful for the great trips I have been able to take in the past.

Such as my trip to Peru with two of my children last July. Since none of us can even go to a nearby park, let alone travel to another country, I thought it would be fun to offer you a virtual trip and finally share some of my impressions of Peru.

Like most visitors to Peru, we mainly wanted to see Machu Picchu. We did, however, visit many more sights and saw quite a bit of the country. Now, whenever I think about the trip, it is the Ballestas Islands that stick in my mind. And I wonder what it is about traveling to famous sites.

Why would Machu Picchu make less of an impression on me than a bunch of bird-shit covered islands off the Pacific coast?

I have noticed the same about my last trip to China. Was it seeing the Great Wall of China that impressed me the most? Or the Terracotta Soldiers? Those sites were great, and it was awesome to experience them in person, but it was the Muslim Quarter of Xi’an that left the most lasting impression on me.

I wonder if this has something to do with having seen too many images of the site before I arrived? I knew what to expect, and so perhaps the experience of being there was more about the excitement of actually doing it and seeing it, than the sights (and by that I do mean their appearance) themselves. 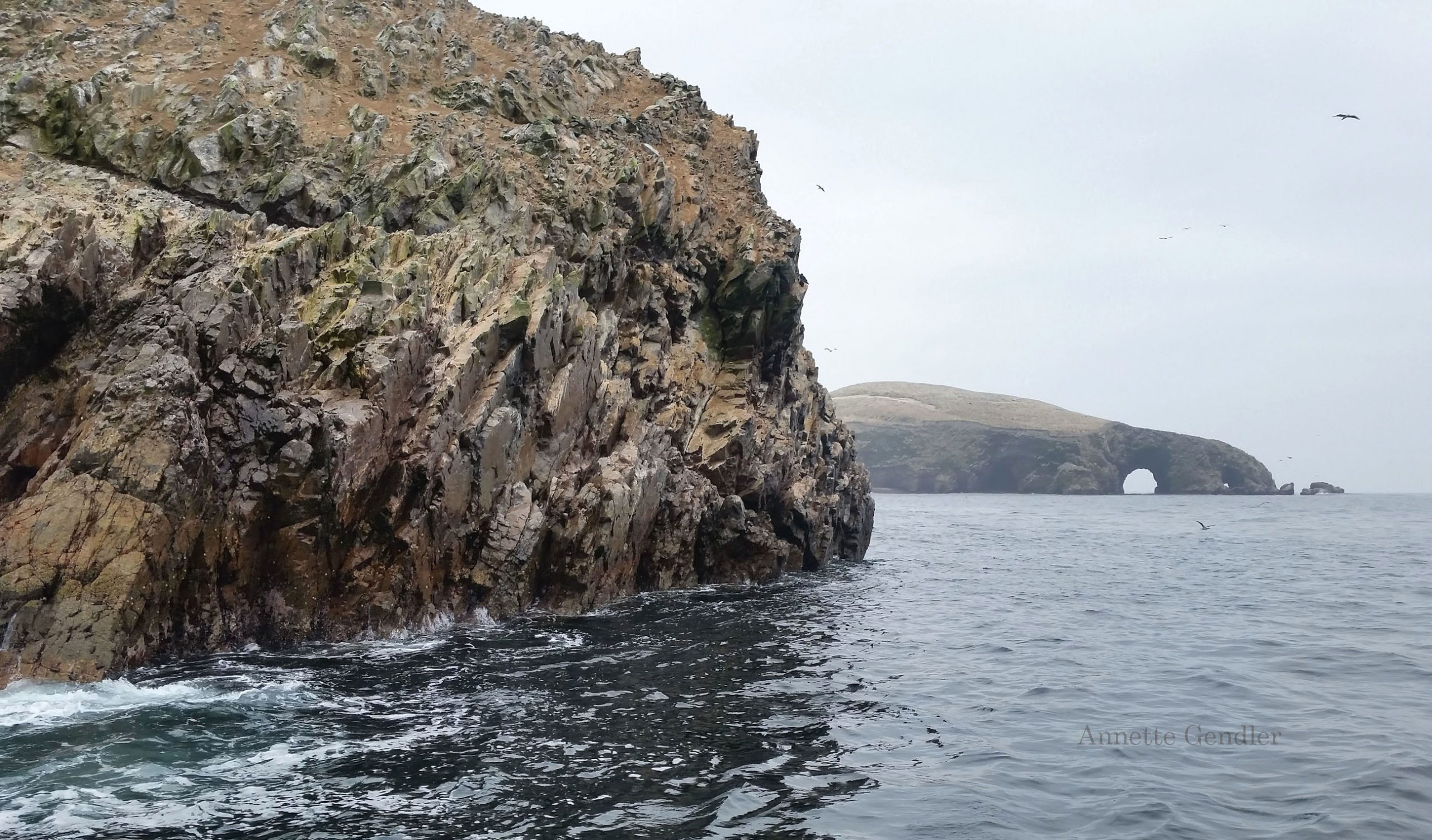 Contrary to that, I had absolutely no expectation whatsoever of the Ballestas Islands.

Rather, our travel agent had recommended a boat trip to this wildlife sanctuary as something to do in the South of Peru on the morning after we had flown over the famous Nazca Lines and before we were heading back to Lima. And since my daughter is an animal lover and veterinary student, she was all for it, so we went.

Lone fishing boat in the harbor of Paracas, Peru, July 2019

This is what Peru’s Pacific coast looks like in the summer most of the time: overcast and grey. When we embarked from Paracas, the waters were also amazingly still but that changed once we got out to the islands. 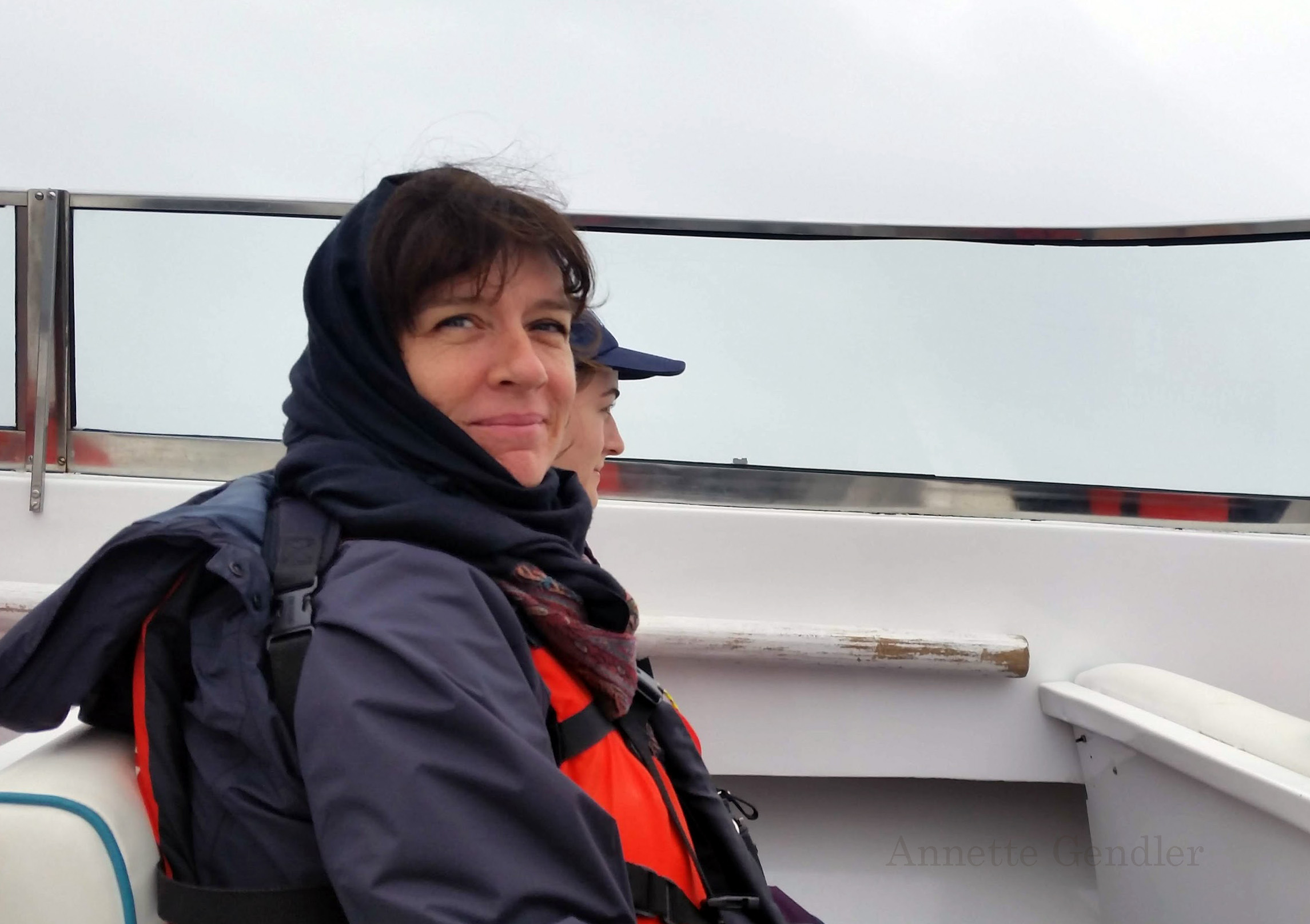 I only wish they had told us to wear wide-brimmed hats on that trip because, guess what happens when you visit a place where hundreds of thousands of birds live? Yep! You get shat on! 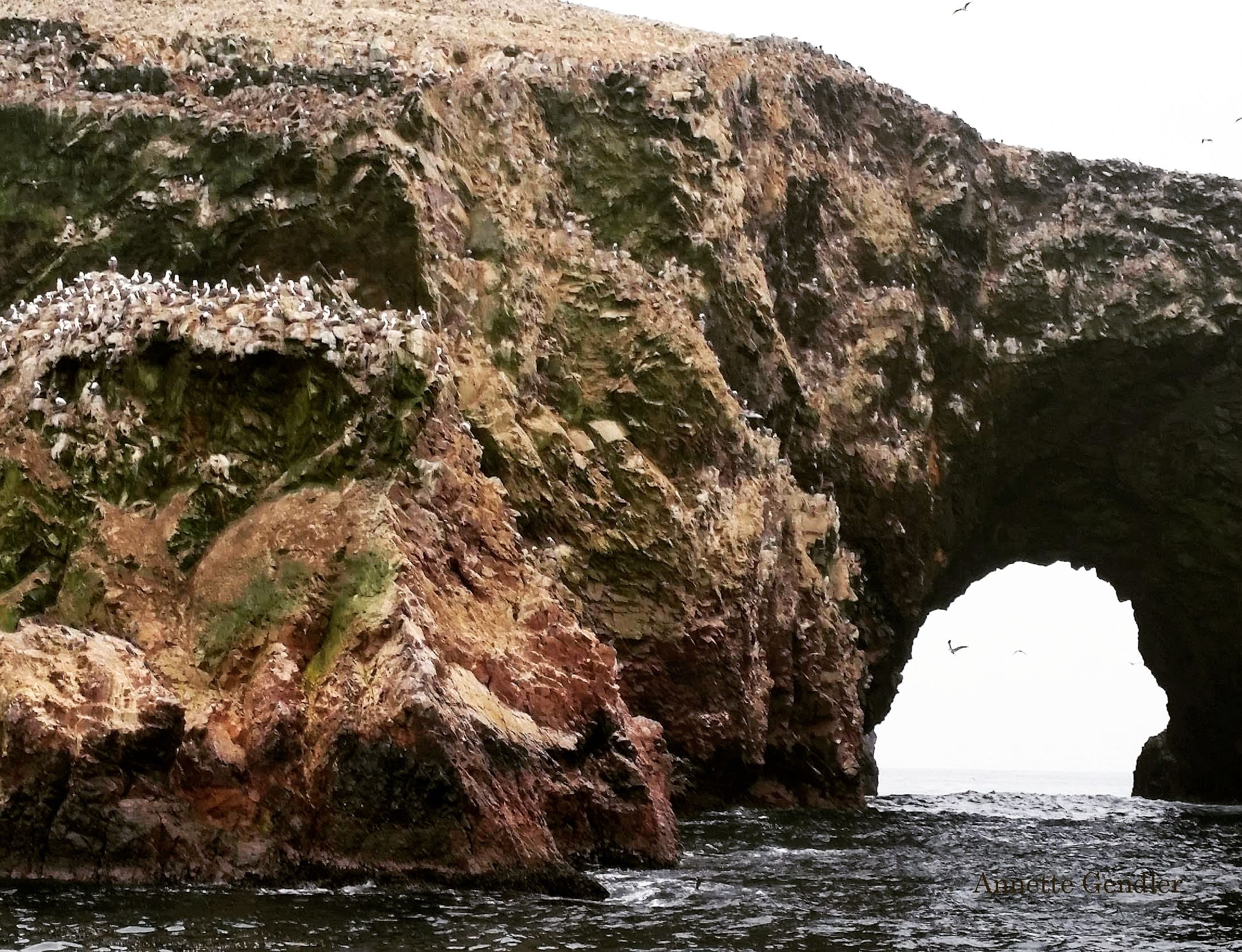 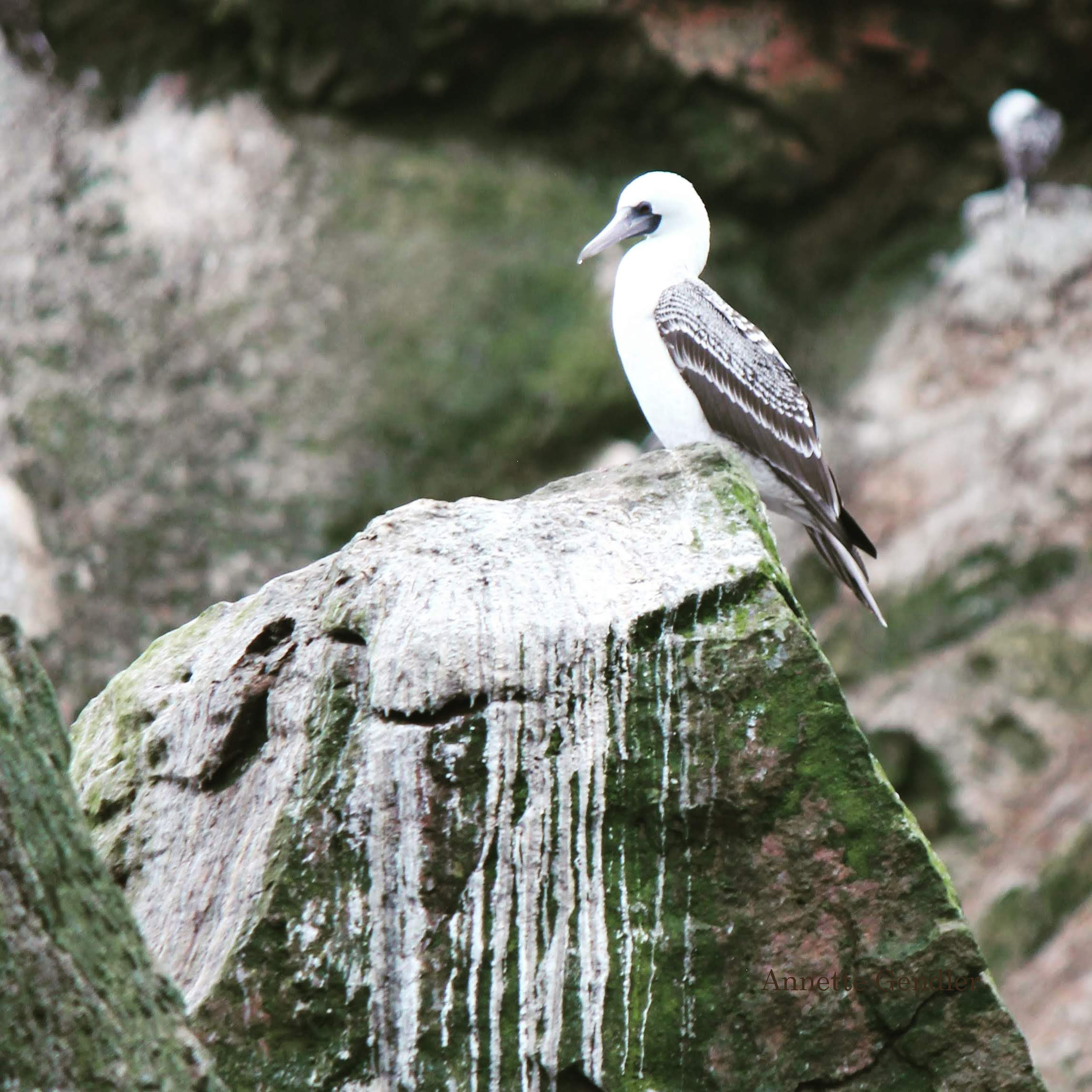 Guano in the making! I’m proud of this shot of the Peruvian Booby, which is the main purveyor of the coveted guano.

The Ballestas Islands were very important to Peru in the mid-1800s when massive mining of the mountains of these sea birds’ shit, called guano, began.

Guano is an excellent fertilizer because of its high content of nitrogen, phosphate and potassium. Chile even began a war with Peru in an attempt to gain control of these islands of guano. 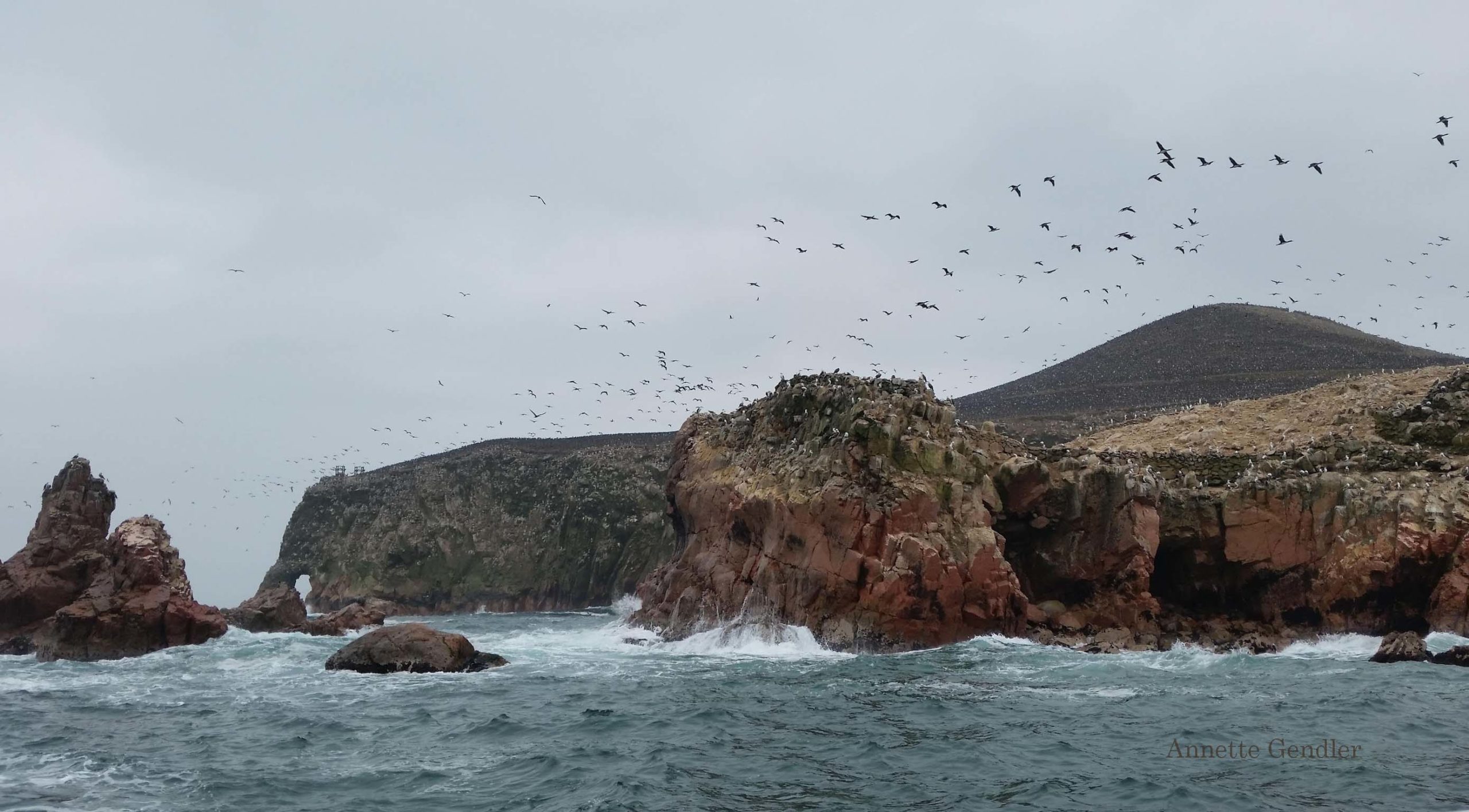 This mountain on the Ballestas Islands is black because it is entirely covered by cormorants.

While today’s bird population of cormorants, boobies, pelicans and the Humboldt Penguin is still impressive, it is far diminished from what it used to be before the massive amounts of guano were carried off. The boobies, for example, build their nests out of guano. When it was harvested, they lost their nesting grounds.

These days Guano is still mined, but only every six to seven years.

Sometimes the wait time is even longer due to El Nino warming up the usually cold water of the Humboldt Stream off the coast of South America. That decreases the anchovies that the birds feed on and thus brings down the bird population.

According to our guide, the latest mining was in 2011, when 200 workers removed 5,600 tons of guano. They still mine by hand with an axe and carry it off in sacks. Can you imagine what kind of nasty work that is? By the way, Chinese indentured workers used to mine the guano in the 1840s to 1870s. There is still a town close by called “Asia,” where they used to live. 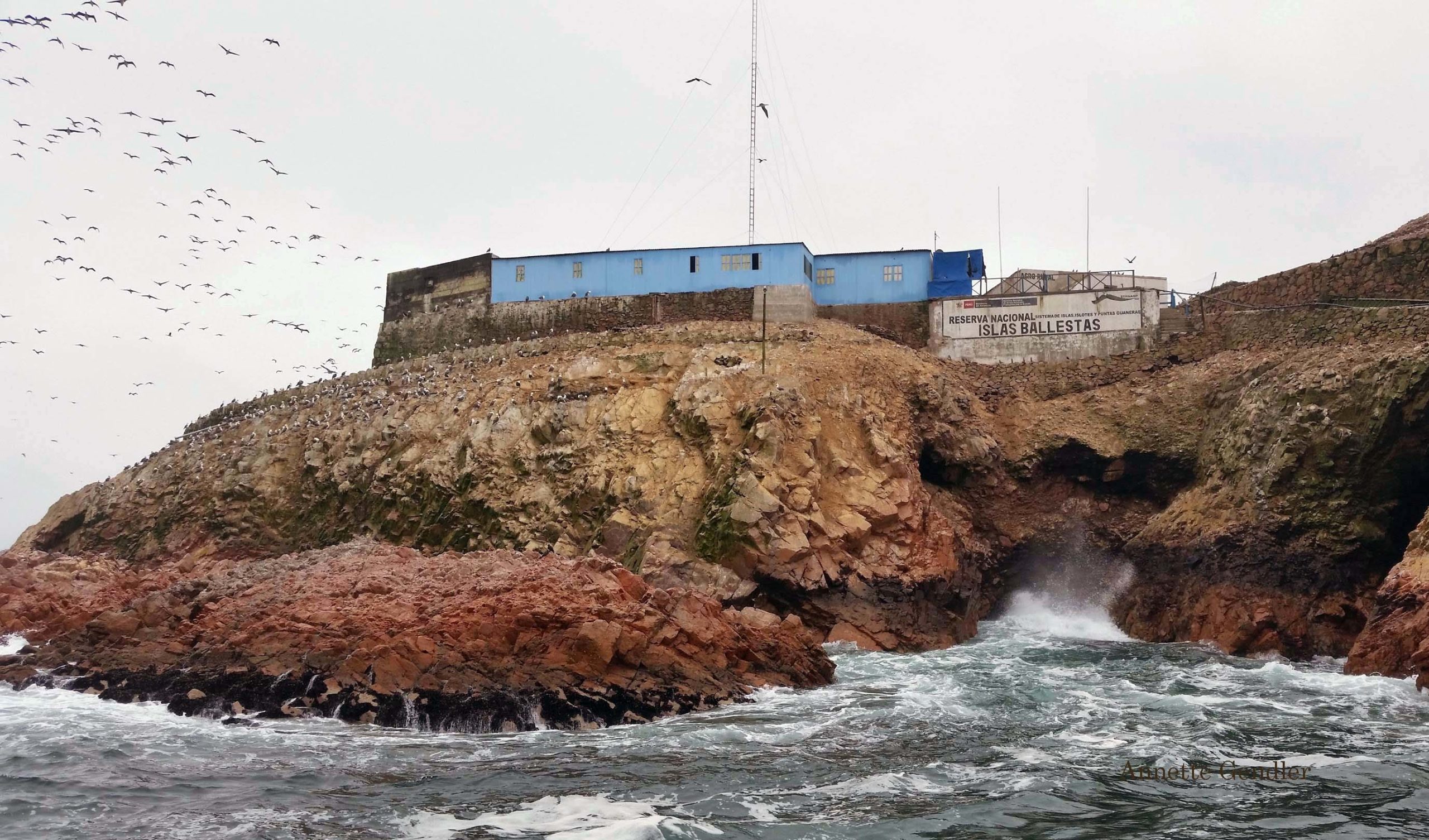 Ranger building on the Ballestas Islands

The vast majority of time, only a few rangers live on the Ballestas, monitoring the wildlife and doing research.

The guano does smell, of course, and it just strikes me as a gloomy place to live. Full of life, of course, but gloomy. 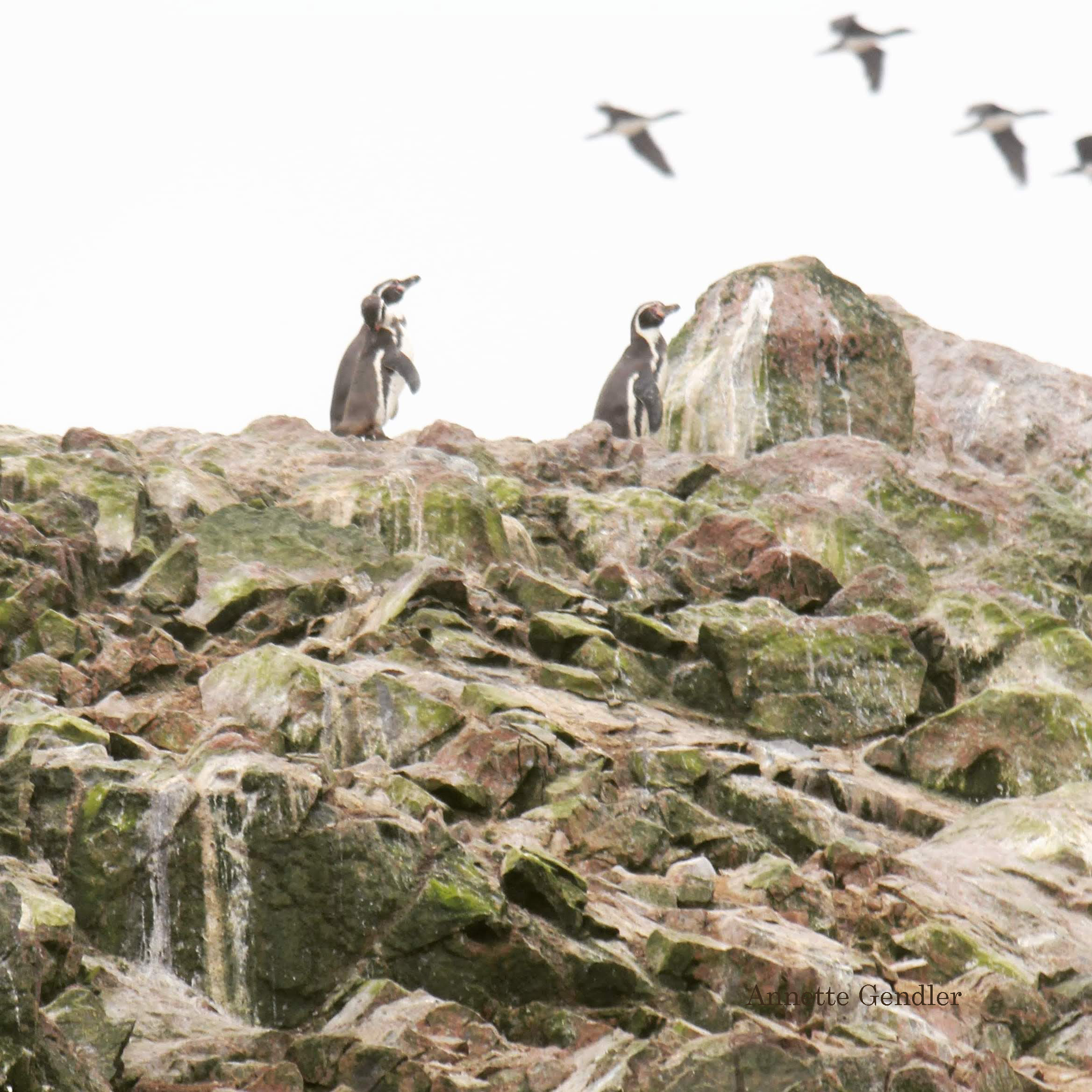 We did spot some Humboldt penguins as well!

The Ballestas are a wildlife sanctuary and so we also got to see sea lions up close! They behave like dogs, by the way, barking and huffing at each other… 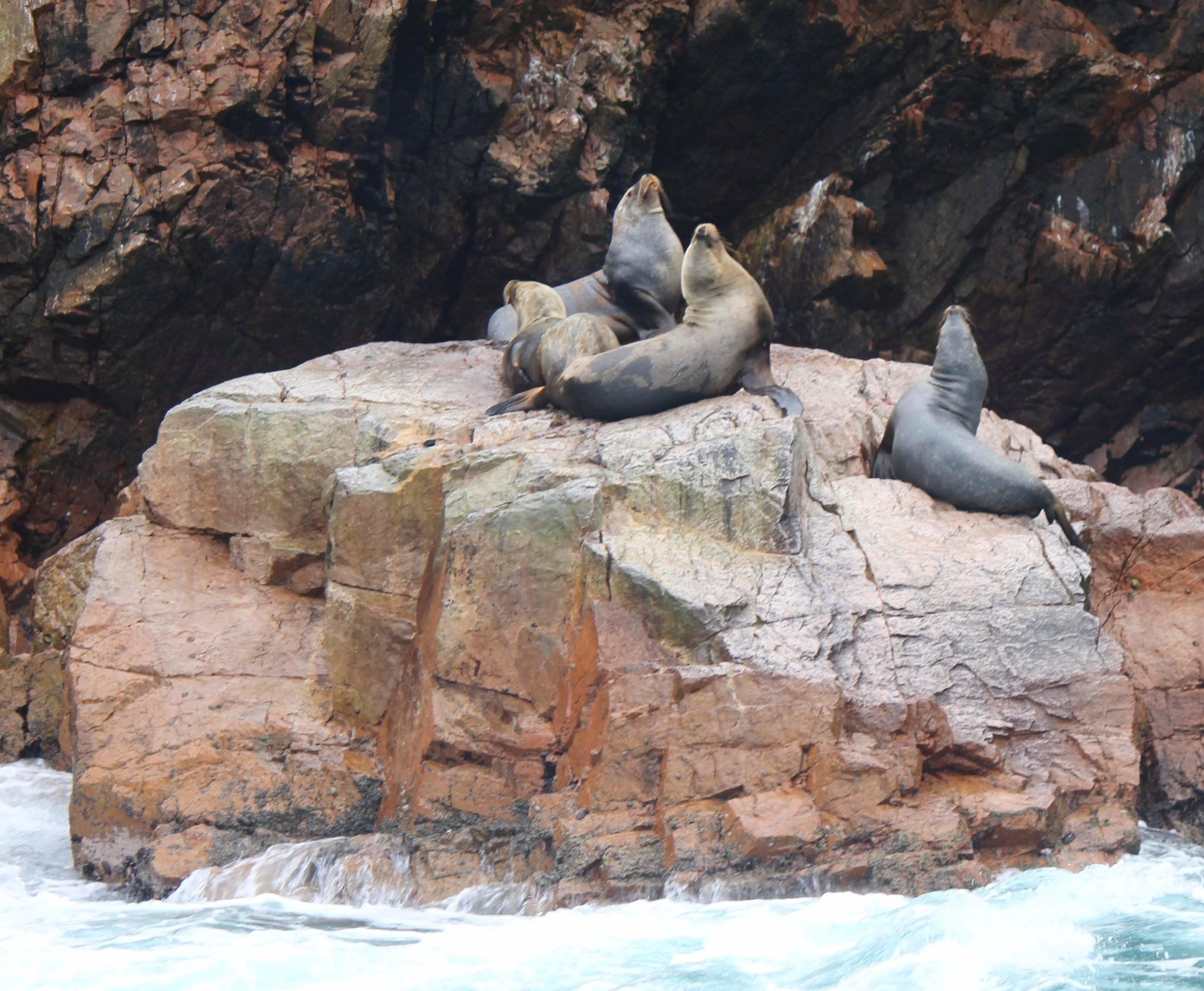 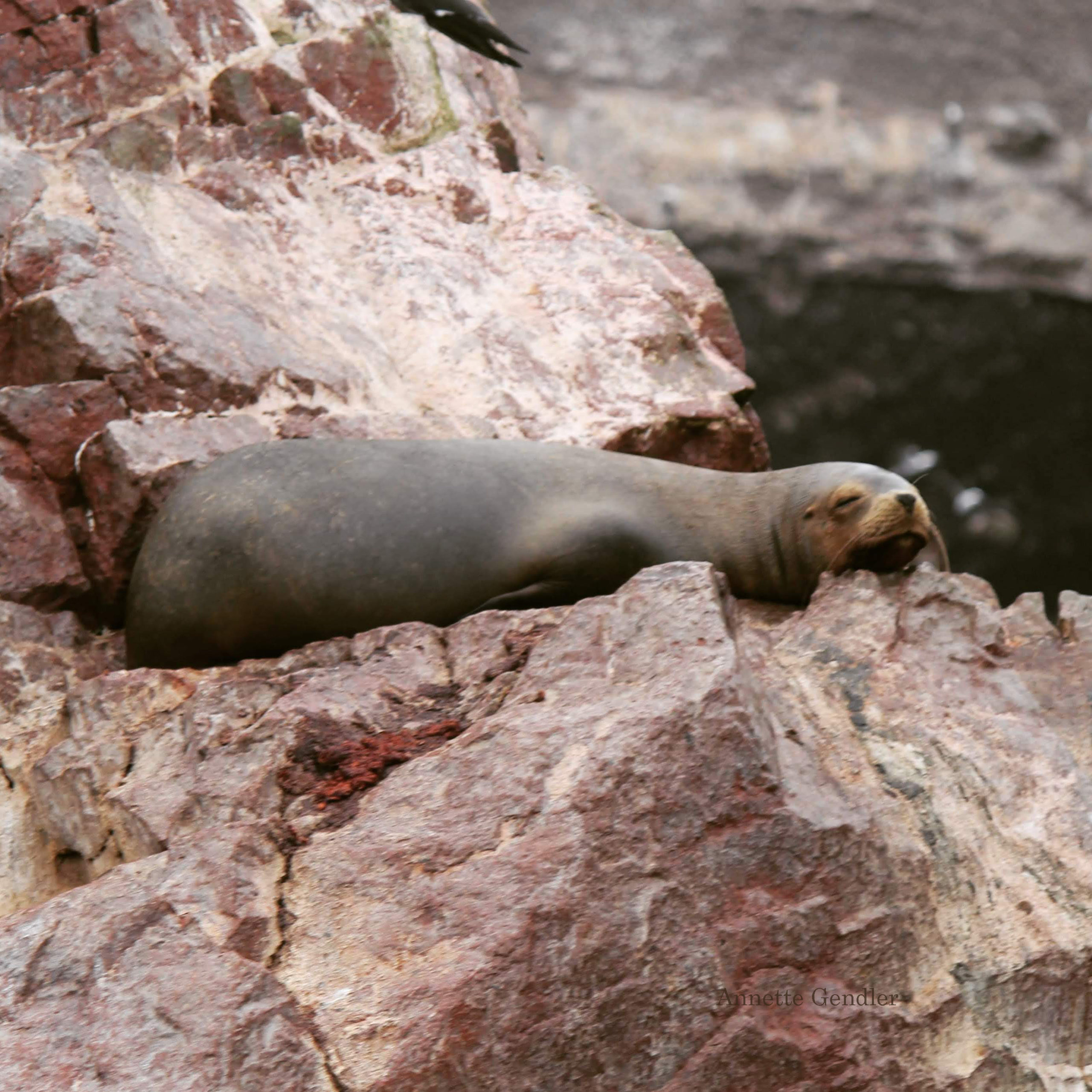 While being under a cover of the birds flapping and screeching felt rather ominous, the sea lions provided some comic relief.

The Ballestas with their awesome rock formations could be strikingly beautiful. When I look at pictures like the one above, they definitely are. But it is probably precisely because this striking scenery is set amidst the atmospheric presence of thousands of birds, mountains of stinking guano, a smoggy grey sky and choppy waters, that the Ballestas Islands made such an impression on me.