Sharing Impressions from an Epic Trip to Peru Last Summer: Beginning with the Shocking Poverty of the Shanty Towns of Lima 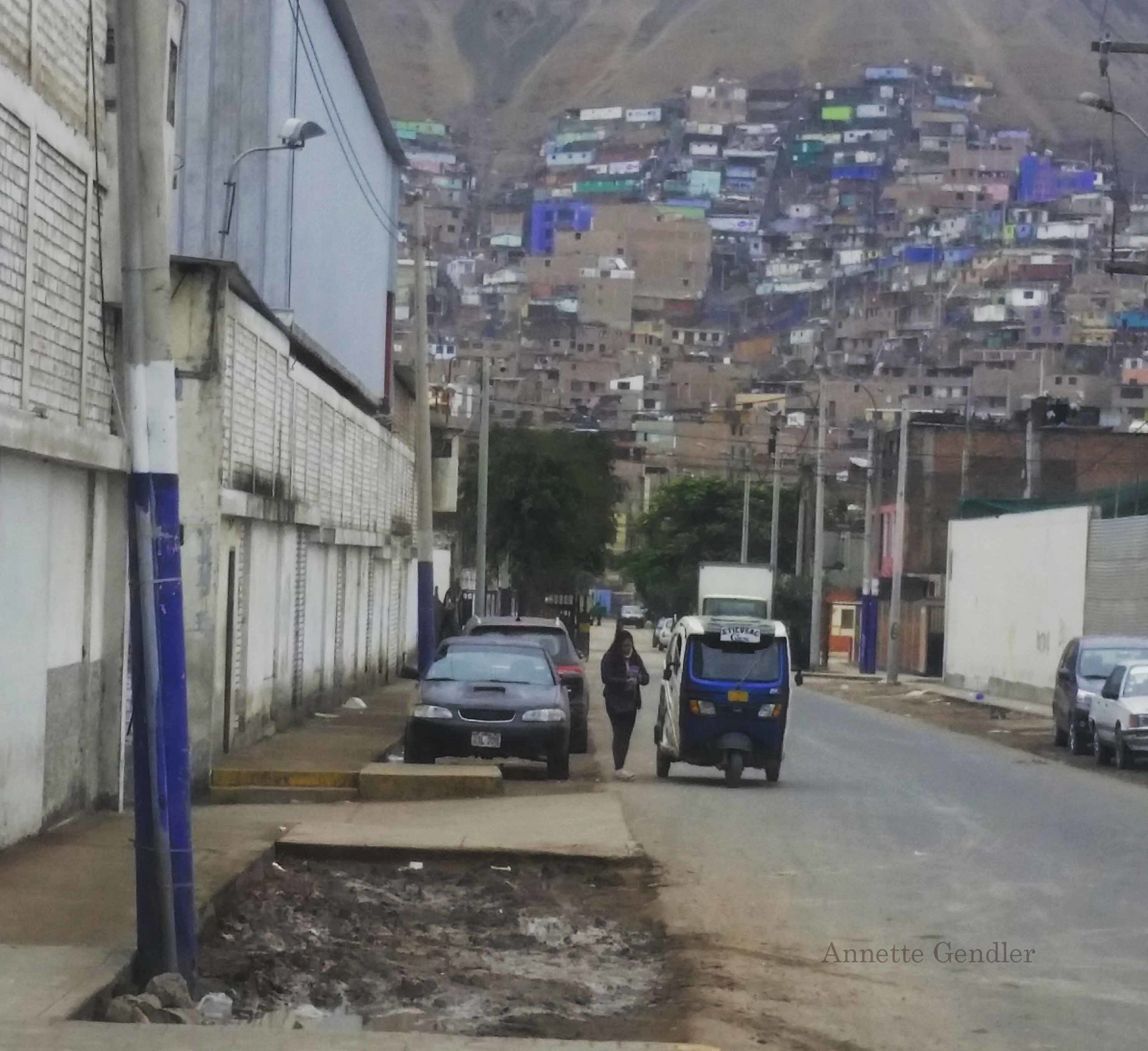 Seeing the shanty towns south of Lima on the very first day we were traveling in Peru last summer left an indelible impression on me.

Never in my life had I seen people living in such dismal conditions. Not even on my trip to Manaus in Brazil a few years ago.

And yet the shanty towns were an appropriate introduction to the complexities of the colorful and challenging country of Peru.

A year ago today, two of my kids and I embarked on an amazing trip to Peru. That voyage seems even more epic now as adventure trips like ours to Peru seem so elusive during the Coronavirus pandemic. I am so grateful for all the travel opportunities I have had. So I thought this is an apt time to relive and celebrate that Peru trip by sharing some impressions from each day of our travel days over the next two weeks.

While famed Machu Picchu was certainly the bucket list site that brought us to Peru, we wanted to see a lot more. After landing in Lima late at night, our itinerary first took us south of Lima. Our destination were the famed and mysterious Nazca Lines, a good three-hour drive south of Lima along the Pacific Coast. The following day we toured the stunning maritime wildlife sanctuary of the Ballestas Islands off the coast, see my blog post. 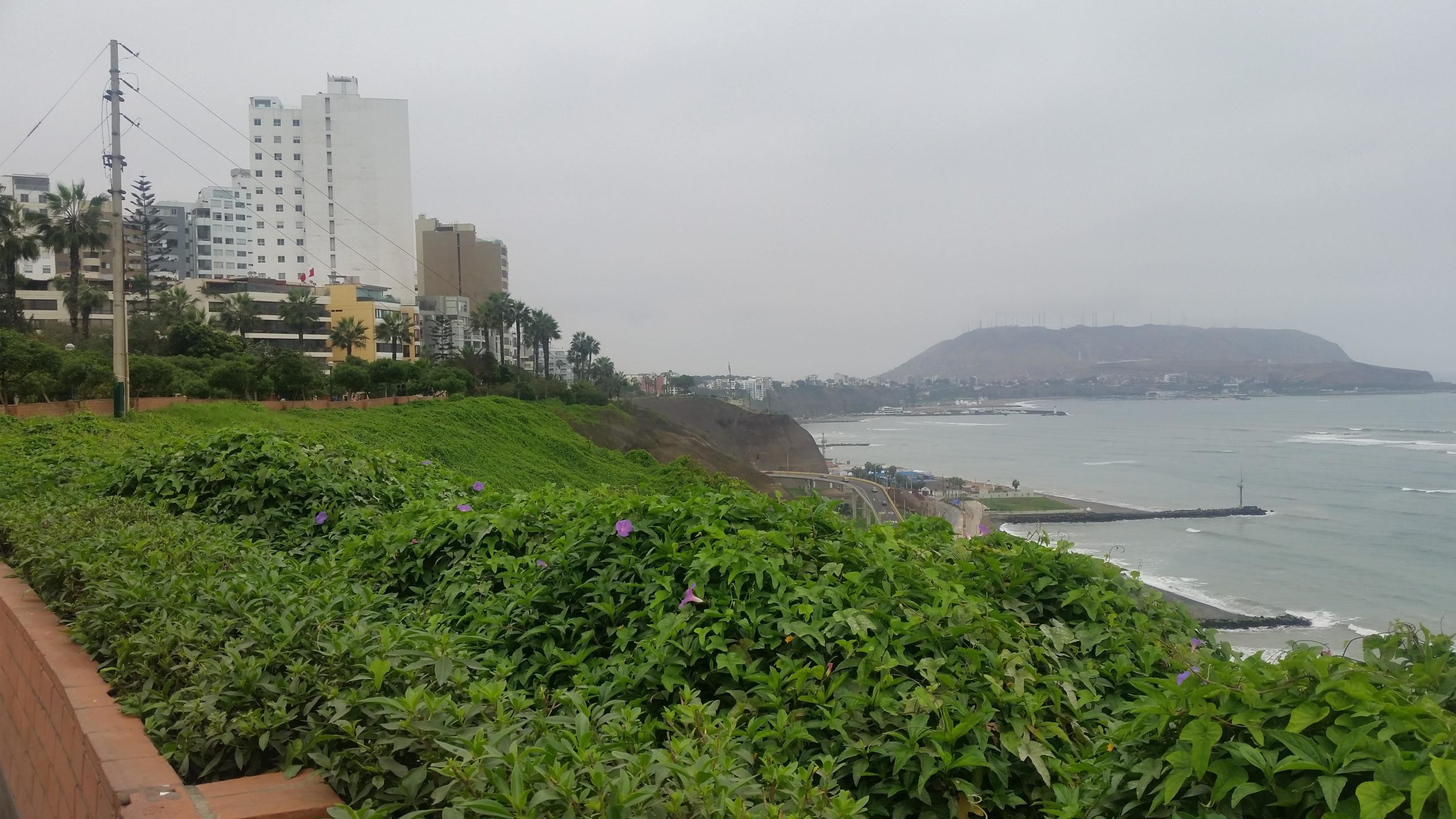 Given that Peru is in the Southern hemisphere, July is the depth of winter in Lima and along its coast. That means temperatures are in the 60s Fahrenheit. The sky is permanently overcast. A light mist reigns most days, although it never rains. Roofs don’t even have gutters there! 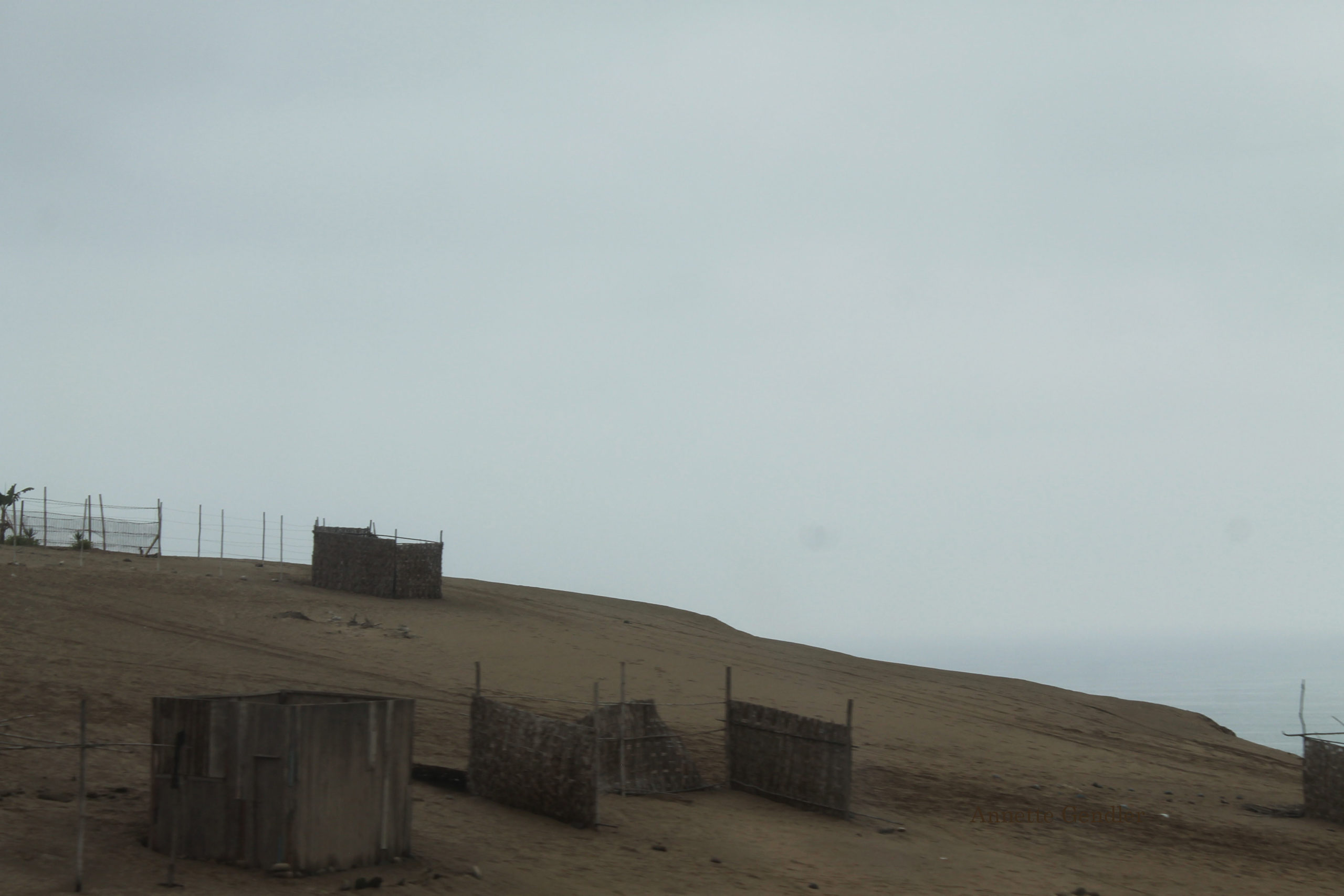 This explains why people could actually live in the sand in huts with walls made of reed matts. I’m not sure if this picture is of huts about to be built, or huts that were abandoned. Nevertheless, I was shocked to see that people actually lived like this.

On the immediate outskirts of Lima, the shanty towns are more established.

In Spanish they are called “pueblos jovenes,” i.e. “young towns.” They began appearing in the 1980s, when the rural population, mainly from the mountains, fled, en masse, the terror of the Shining Path. It was safer to stake a hut in the sand on the windy Pacific coast than to endure the terror reign of that Marxist group in the Andes.

Even today, our guide explained, there is more opportunity close to the big city.

People still leave the primitive life in the mountains for better schooling for their children, even if life in a shanty town is just as primitive.

I did not understand that until we traveled the mountains and saw how children would have to walk miles to reach the one school in their valley. That journey becomes precarious during the rainy season. 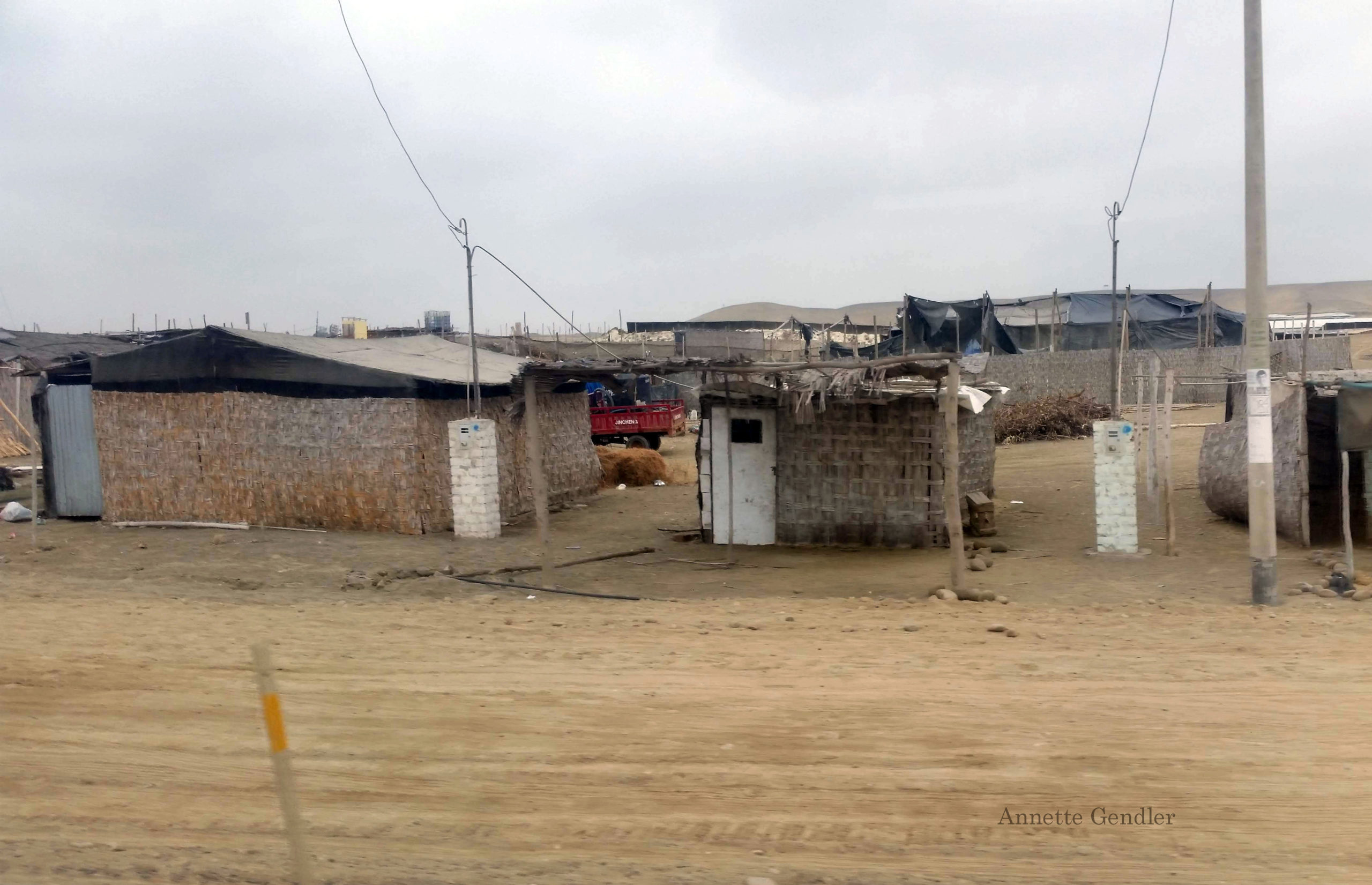 Electricity, as can be seen here, is usually the first amenity to appear. All you need is someone who runs a generator and charges the squatters to run a line to their hut. 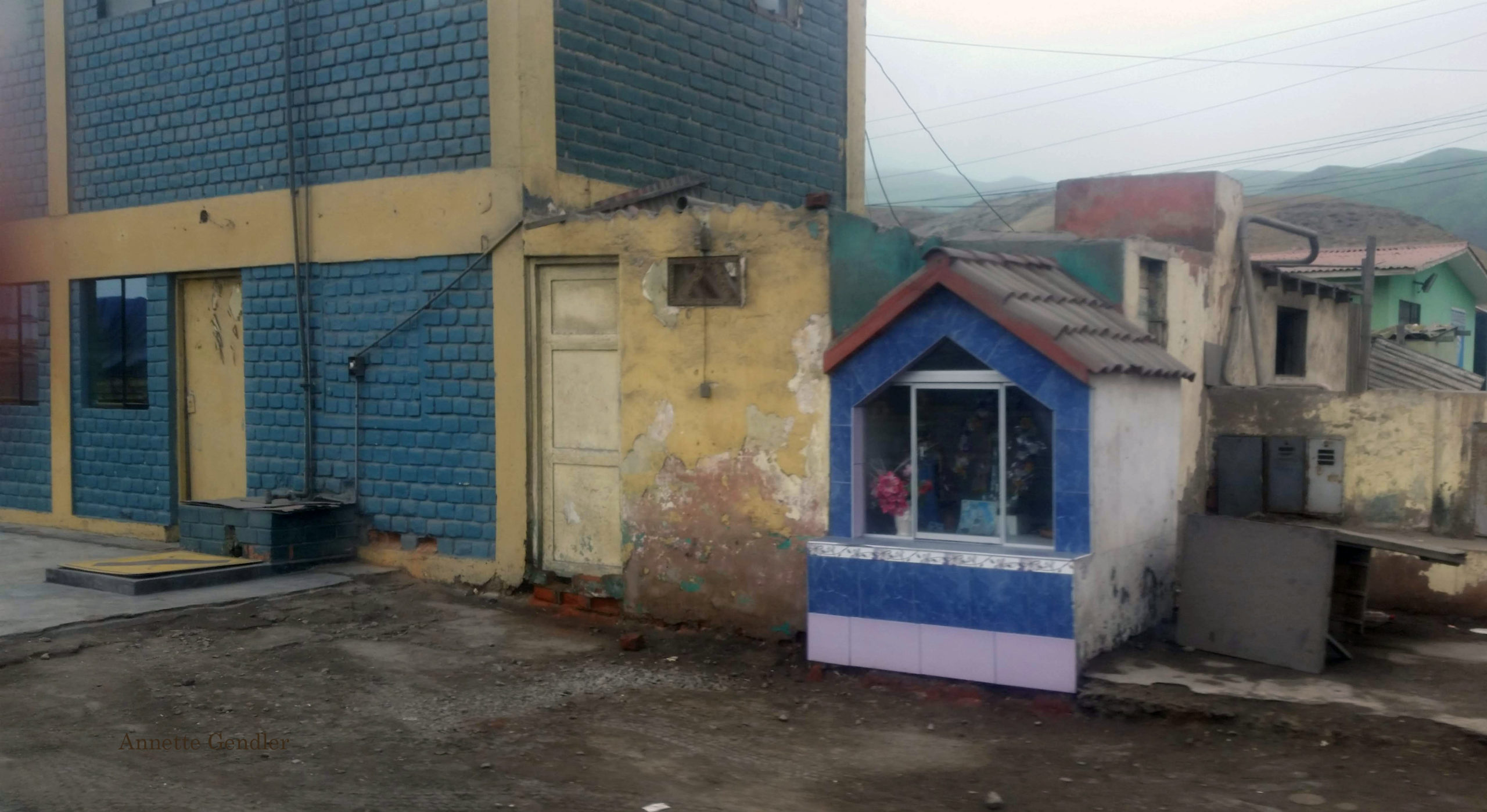 Roadside shrine in a shanty town

Here a more established shanty town along S1, the highway that runs south along Peru’s Pacific coast. Typical is the half-finished appearance of these buildings as people do more work on them whenever they can. On top, next to the laundry, you can see the big water containers that are the residents’ water supply. Meaning there is no sanitation, canalization or proper water run off. Garbage is strewn about everywhere, especially alongside the road. 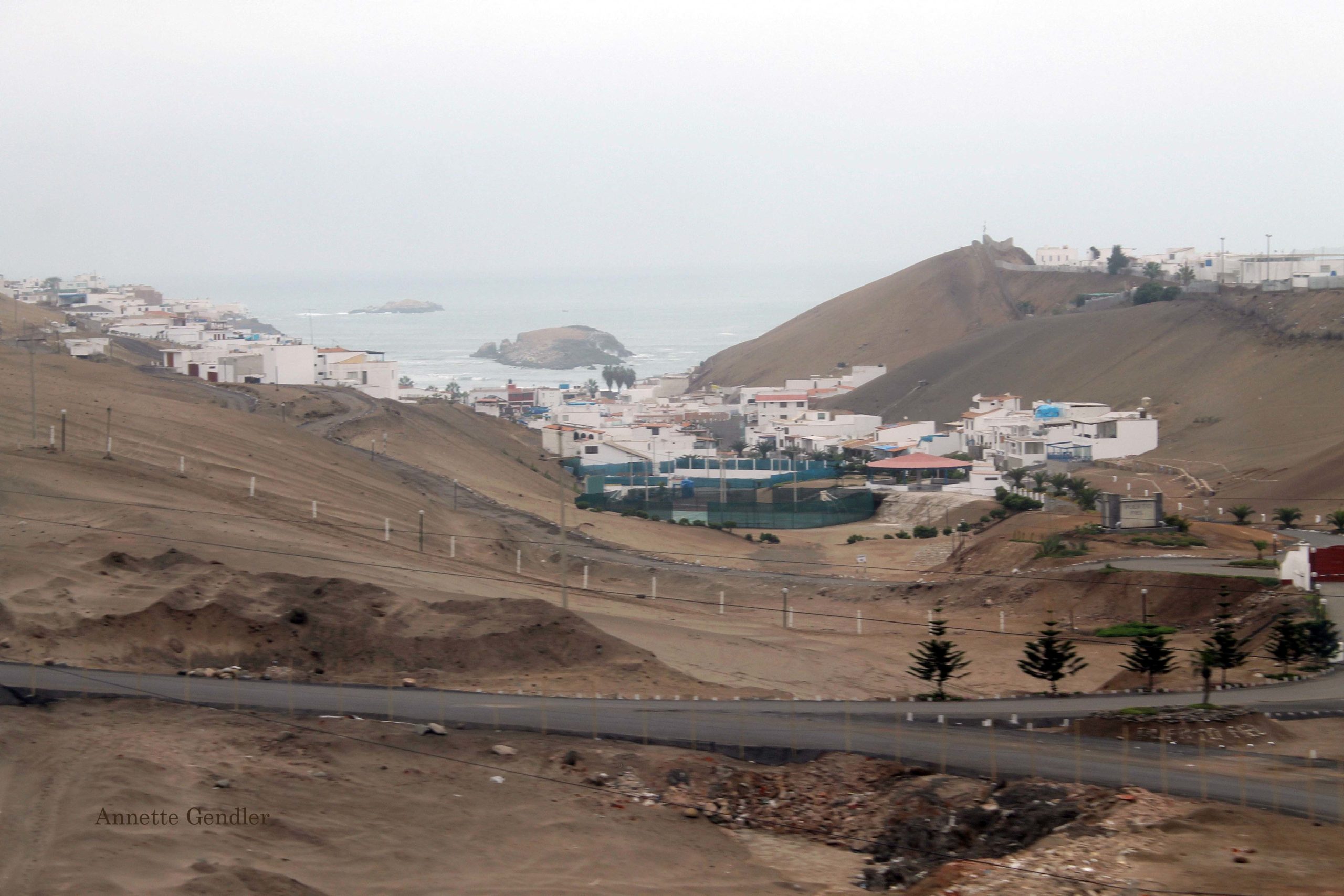 Nevertheless, in between the sand dunes covered with shanty towns, one finds condo resorts like this one along the highway.

Whoever can afford those comes here from Lima to buy or rent a weekend or vacation home. I gazed out at those shiny white villas and wondered how their residents could stomach the sadness of the shanty towns each time they passed by on their way to weekend fun? I found them hard to bear on the two times we drove by from and then back to Lima. 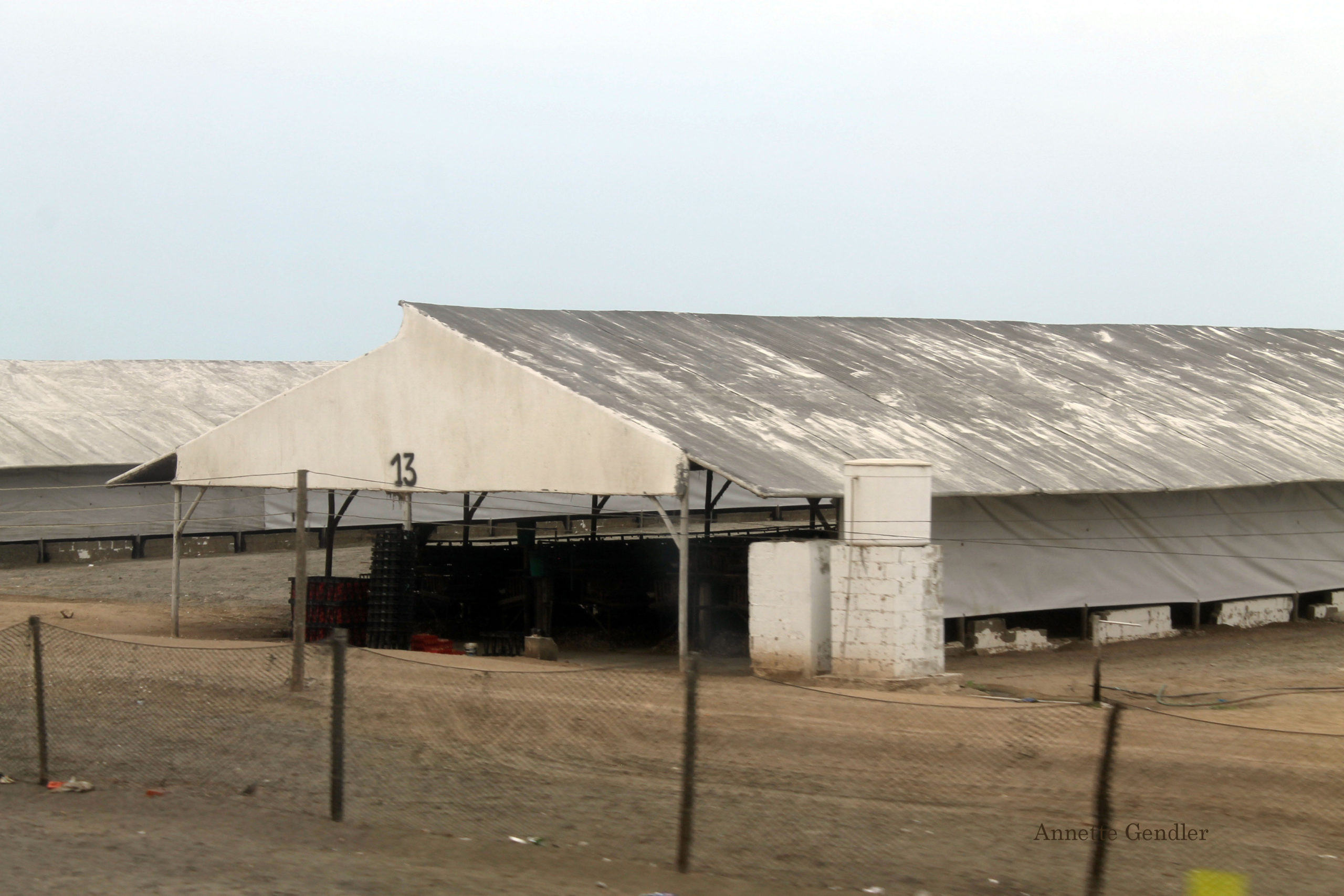 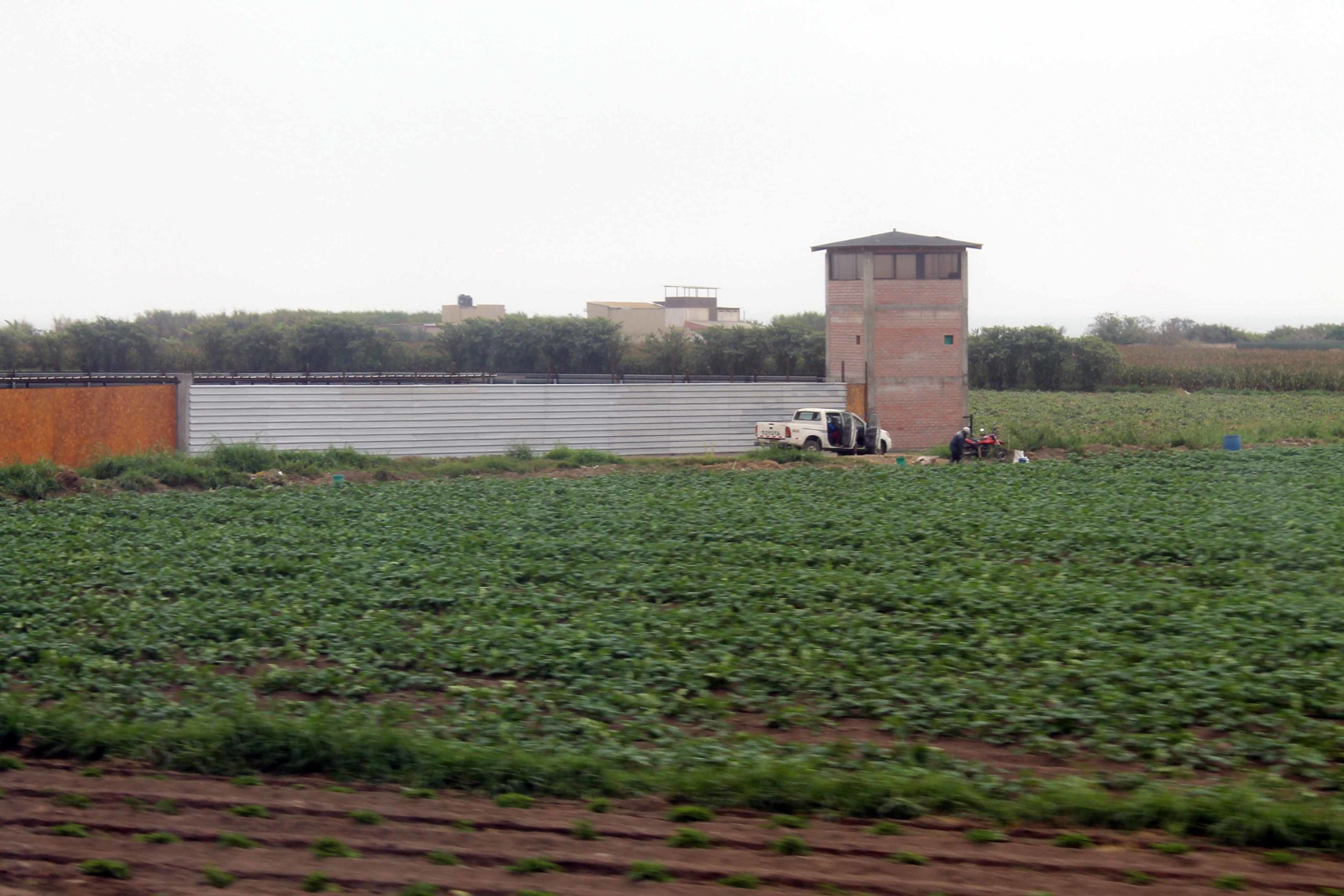 There are, however, plenty of jobs available along the coast itself, furthering its appeal.

Shanty town dwellers find work in the cotton, artichoke and asparagus fields. A huge gas plant exports to Chile and Mexico, while anchovy fishing is big farther south. In general, the mineral rich soil of Peru is very fertile, and its produce has amazing taste. 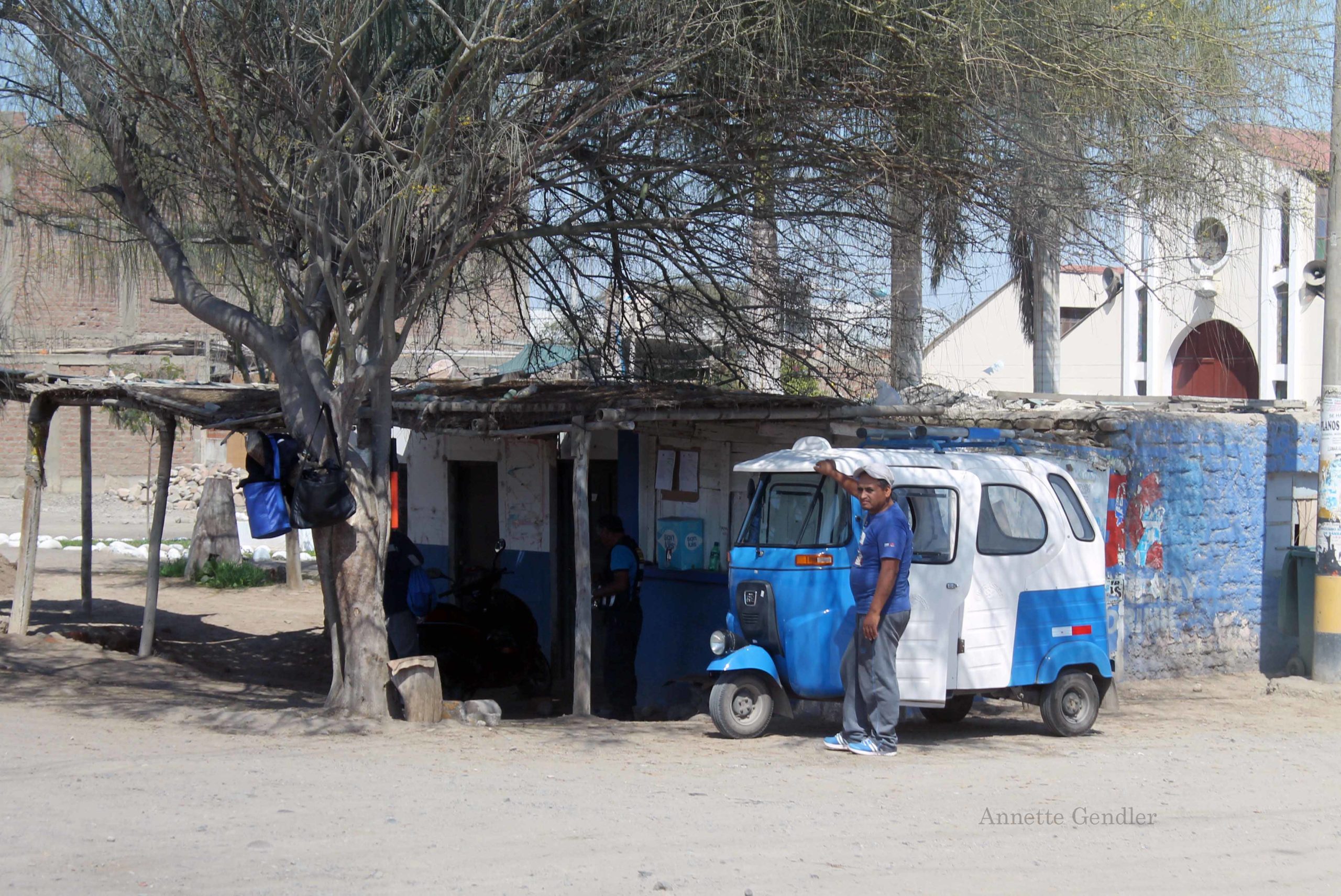 As we got farther south, the mist receded and the sun cam through and I could finally see some of the appeal the coast might have. Even the shanty towns looked more colorful.

Here’s also an shot of a laborer with his tactac, three-wheeled vehicles that are ubiquitous in the country side and shanty towns.

According to our guide, a tactac costs between 4,000 to 5,000 Soles (about $1,200 – $1,500). They seem to be the key to upward mobility. Tactacs often serve as delivery vehicles or taxis. It was amazing to see how many people could fit into one of those!

Without their own means of transportation, people wait for the bus, like this guy. This is my favorite shot from that route, by the way, replete with the typical political graffiti.

Next up in my Peru series: Our flight over the Nazca Lines, the pre-Columbian geoglyphs in the Peruvian desert.