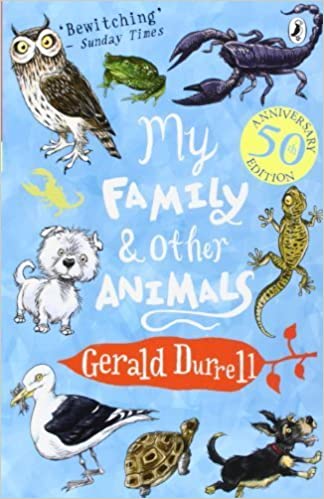 If you’re ever looking for a break from dark and heavy memoirs and want to read one that is light yet literary; or if you wouldn’t mind spending time on a sun-drenched Greek island but don’t have the time or means to visit, then read Gerald Durrell’s memoirs about his childhood in Corfu.

My memoir group and I were in exactly that mood last spring. Bogged down by reading memoirs about death, depression and illness, we resolved to read funnier, upbeat books over the summer.

Of all the books we read last year, including the darker ones, Gerald Durrell’s My Family and Other Animals

This surprised me because I am not a big animal lover, and this book is all about 10-year-old Gerry discovering the wild life of Corfu. However, his accounts are so whimsical, comical and light-handed, and his prose so gorgeous that I loved the book.

Anyone who can come up with a phrase like “the headlight raked along the veranda briefly” to describe the sweep of a car’s lights at night is a prose genius and a master of the strong verb.

I went on to read the sequel Birds, Beasts and Relatives

, dog-earing many pages for their gems of prose. Here is one: “The first course that Demetrious-Mustapha set before us was a fine, clear soup, sequined with tiny golden bubbles of fat…” Who would think of sequins when describing fat droplets on a soup’s surface? It makes me drool with envy!
Durrel’s Corfu Trilogy (I’m currently reading Garden of the Gods which is only available second hand) is ideal bedtime reading (which is where I read most of the time) because it is written in episodes.

You can pick it up anytime and read a page or two without having to recover where you were at.

And yet I got invested enough in the cast of characters of his family to want to read on, to find out what adventures befell them, or how they extracted themselves from a mishap.

As one of my students confirmed, My Family and Other Animals also gave us a whole new appreciation for the natural world.

Due to this book, she was, all of a sudden, amused by the web one spider was spinning outside of her high rise office window. She got really worried when the window washers came by! The spider survived. Just this morning, as I was walking to work, I spotted an earthworm and was reminded how little Gerry would have collected it to feed it to one of the birds he was keeping.
One interesting tidbit as we come off the Greg Mortenson memoir scandal:

Gerald Durrell didn’t take the truth too literally himself.

When you check out his bio on Wikipedia, you’ll find that his famous novelist brother Larry didn’t live with the family in the villa as in the story. Rather, Larry was married and living in town. I expect Durrell would have been roasted for that in our day and age.

Given the charm of this book, however, I wonder whether we are taking it all too seriously these days.