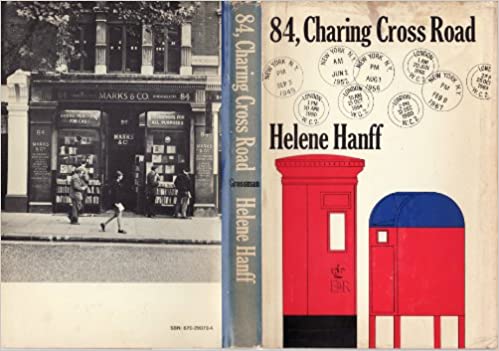 “i never can get interested in things that didn’t happen to people who never lived.”

I am tempted to put this quote as the mantra of this blog here. Maybe under the headline? Isn’t it perfect for the nonfiction writer? What do you readers think about that? (BTW, the uncapitalized “I” is Helene’s original, not my typo. Amazingly her writing from more than 50 years ago looks a lot like some emails or text messages do today.)
My Advanced Memoir Workshop and I just finished reading 84, Charing Cross Road

. Once in a while I make them read a classic (usually the students vote on the books). While some of them expected to hate the book,

by about page 5 everybody was in love, including me.

With its bare 97 pages, it’s a quick read. There is no introduction and no afterword. It contains only the letters, and not even all of them, exchanged between Helene Hanff, a curmudgeonly freelance writer living in New York City, and a used book store in London from 1949 to 1969. The rather proper Frank Doel is her main correspondent, but others chime in.
I asked everyone to pick a favorite letter to share in class. Many chose Helen’s November 18, 1949 letter that has no greeting and begins with (in capital letters): “WHAT KIND OF A BLACK PROTESTANT BIBLE IS THIS?”

My favorite letter is on page 44 (February 9, 1952) from where I got the above quote. In it she also says: “It’s against my principles to buy a book I haven’t read, it’s like buying a dress you haven’t tried on.” I totally agree with that!

As I was reading I kept asking myself:

What is it about this spare book that is so charming, so intriguing, so engaging that it has become a classic and has been made into a stage play and a movie?

There’s no romance, no tragic love story, no heroic event, no war or adversity to overcome, no death. Although Frank dies in the end (and that almost made me cry) the book is not about that. One of my students put it best:

It’s about the everyday, and thus a most universal theme.

I was amazed how much this book contains: the story of a friendship, a contrast in characters, a glimpse into post-war England, cultural differences (New York Dodgers vs. Tottenham Hotspurs), and of course, discourses on sometimes rather obscure books.

But what is most engaging, I believe, are the voices.

While I expected the epistolary form to be constraining (no scenes, no action, no description), it proved to be the perfect conveyor of these characters, or at least the sides of them they wanted to portray. And it leaves a lot of white space for the reader to imagine and fill in the story.

Therein, I think, lies its ultimate magic: The reader is entirely engaged as he or she is privy to this extraordinary, and at the same time rather ordinary, correspondence.

If you haven’t read it yet, read it and be charmed! It takes only one evening or one plane ride. Then go watch Anthony Hopkins as Frank and see how he does.

I will share with you one of Helene Hanff’s priceless insights on writing memoir.

I found it as I searched to learn more about her and her masterpiece. The following is from a 1985 interview Helene Hanff gave to Sybil Steinberg, which appeared in Publisher’s Weekly on the occasion of the publication of her memoir Q’s Legacy:
“She [Helene Hanff] has learned, she says, that she can only write about things that have happened to her. ‘You’d be amazed how many ways you can tell the same autobiography. I’ve never written anything else, though I never told the whole story in any of them. But each time Gene Young [her editor] read the first draft of my books, she called and said, ‘You’ve left yourself out of it.’ It took me just ages to get up the nerve to start with me. So this time, when I first had the horrible suspicion I was about to fall down the same rat hole again, I tacked up a sign over my typewriter: ‘You’ve left yourself out of it!’”
Annette Admin2021-10-13T17:30:39-05:00May 13th, 2011|Tags: Book Review|