The Best Writing Advice I Ever Got 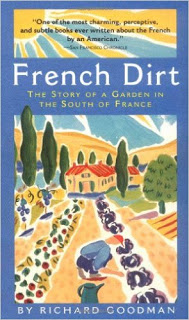 Today I’m sharing with you the one piece of advice that was the key to me becoming a writer. Many years ago I took an online travel writing class taught by Richard Goodman, and one essay he posted rang a bell with me:

Wake up and write.

three small children. I finally started getting up at five and writing even though I am absolutely not a morning person.
Some days I would only get in half an hour, or push around a few sentences before the pitter-patter of little

feet down the hallway announced that my writing time was over. But no matter, I knew the next morning would come around, and at least I had done something for myself already, something that I cared about. The day had begun well.

I’m happy to welcome Richard as today’s guest blogger and to share this essay with you. Richard Goodman is the author of French Dirt: The Story of a Garden in the South of France

and The Soul of Creative Writing

. His most recent book is A New York Memoir

.
And let us know, please, how you fit writing into your life!

WAKE UP AND WRITE

WRITING IN THE MORNING

I’m aware there are people who don’t share my enthusiasm.  Some people hate the morning.

It’s their enemy.  They hate everything it stands for. They’d rather have a spiked enema than get up at 5:30 or 6 and write for an hour.  Fair enough.  However, in teaching writing for over ten years, I’ve found two things to be constants among people who are trying to write.  The first is, that they can’t find the time to write.  The second is that whether you’re a night person or not, most people have told me they’re too
tired to write when they come home.
And why shouldn’t you be tired?  You’ve worked all day.  Whatever job you have, it’s bound to be tough.  Whether you’re a truck driver, surgeon, housewife, lawyer, real estate salesperson, teacher, social worker, secretary or minister, you’ve put in a long, hard day.  I know, because I’ve had all these people as my students.  So, in the evening, after the kids have been fed and you’ve looked at their homework, after the dog’s been walked, after the dishes have been washed, and after you’ve talked about the latest family crisis with your spouse, you may be a night person, but you only have so m much to give.  Chances are, you’ll be nodding off by the fire in mid-sentence, your head snapping back and eyes popping open and then closing again.  You probably can’t even read three pages of a book, much less write.
Now, you could do what Balzac did.  You could sit down at your desk and drink the first of 20 or 30 cups of arsenic-strength coffee and write all night.  Balzac did that for twenty years straight, catching a few hours sleep every afternoon.  He died at 50, leaving behind 90 novels and, through them, gained his immortality.  Most of us are probably not up to that.  So, what’s left?  The weekends.  Sure, the weekends.  Most anyone can grab a few hours on the weekend to write.  But a few hours every weekend does not a writer make.  It takes consistent effort.  If not every day, then nearly every day.  So, as I see it, we’re left with the morning.  The morning, after you’ve had a decent night’s sleep.  When your body and brain have been restored.  By morning, I mean that uninhibited time before your outside demands begin.  An hour or so earlier than normal.  That’s when you can write.

The morning is quiet.  You need quiet to write.

It allows you to concentrate and to put yourself into your work.  Noise can break that spell easily.  Your censor or critic is still half asleep, too.  Get in there and write before it wakes up and starts sabotaging your work.
“No, no,” you reply, “I can’t. I can’t function in the morning.  I’m a vegetable until noon.  I’m comatose.  I’m useless.”
Well, maybe so.  But take a good look at your progress in the last year in terms of your writing.  How goes it?
Sobering, isn’t it?

An hour every morning.  You need at least an hour.

You have to get up early enough to give yourself at least an entire hour to write.  Now, some people I know get up early and then go directly to work.  They work at the office before anyone arrives.  If that works, that’s great.  An office empty of people is a quiet place, that’s for sure.  Staying at home is fine, of course.
Looks like you may be a morning person after all.

ONCE YOU’RE UP IN THE MORNING, RESIST THE NOT-WRITING MUSE.

We all seek a Muse, (“Artists pray to be obsessed by something,” as W.S. Merwin says), but sometimes it appears we have a Not-Writing Muse.  Not writing is seductive.  The Not-Writing Muse sings to us provocatively, like the Sirens did to Ulysses in the Odyssey.  It wants to lull us, and to draw us from our desks with alluring tunes.  What does this dark Muse’s song sound like to you?  Well, since it’s early in the morning, the Not-Writing Muse promises you sleep.
“Come with me, and you can sleep.  Beautiful, carefree sleep.”
Sounds tempting, doesn’t it?
That’s why you should be wide-awake-or as close as possible-before you sit down to your desk.  Then, if you’re like me, once you’re up, you’re up, and the Muse’s call for sleep has no allure.
The Not-Writing Muse might try and lure you to the TV or to the radio.  You can probably resist television, but what about the radio?  What a great time to listen to NPR, the Not-Writing Muse softly sings!  You never have enough time to listen to public radio, do you?  True enough.  But think about it. Most of the time, the news seems all bad.  It IS all bad.  Terrorists, Atomic weapons, global warming, tornados. You may find yourself getting a bit depressed.   Do you want to start your day with this?

The most seductive song the Not-Writing Muse has to sing, the one with the most insidiously attractive tune, is the Internet.

How we can while away the time so easily on the Web!   So, the Muse starts to sing:  “Why not hit the Internet?  No harm in answering a few e-mails, is there?  Or writing a few.  You might be able to get a handle on some of those problems at the office, too.  Yes, e-mail the client.  Let him know you’re on top of things. He’ll notice you’ve written him at 6am, of course.  That’s bound to impress him.  ‘Hey, Phil, I’m thinking about you 24/7,'” your early e-mail declares.

Or, even more radical, don’t use a computer at all to write.  Write in longhand.  If that’s impossible, turn off the sound/volume of the machine.  Whatever you do, don’t log on to gmail, or whatever provider you have.  Do anything you need to do to thwart the call to the Internet.  It’s the most insidious thing we’ve ever invented.
But the Not-Writing Muse hasn’t quite given up yet.  It’s got one more card up its sleeve.
“When it comes down to it,” it croons, “the real world is the real world.  Bills have to be paid.  The kids are going to college soon.  Where’s that money going to come from, anyway?  So what the hell are doing here wasting an hour trying to be a beatnik artist when you should be helping out in the trenches?”
Ok.  Calm down.  Take a deep breath.  Remember this: you knew all of this going into this thing.  You knew about the bills, the kids and college, and the boiler that needs replacing.  But you opted to take the time to write.  In spite of all that, you made that decision when you were sober, and rational-and wide awake.  Why are you going back on it now?   The real insidiousness of the Not-Writing Muse is that part of you wants to hear what it has to say.  Part of you wants to be drawn away from your desk, especially if the Muse is telling you you’ll be doing what’s “really right” if you don’t write.
They don’t call them Sirens for nothing.
So, go back to the feelings behind your original decision.  Drink them in.  Try them on again.  Live inside them for a few minutes.  That will give you the strength you need.
You don’t need this particular Muse.
Annette Admin2021-10-11T21:53:41-05:00June 8th, 2011|Tags: Writer's Life|