Writing Letters to my Children 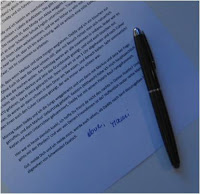 Now that my kids are all away at camp, I’m doing an odd thing: I’m writing them letters.

It’s an unfamiliar thing. It feels awkward to recount my daily activities in a letter to my children. Usually they are part of my daily life and whatever happened in a day will be retold at the dinner table or on the ride home.

Another oddity is that they want me to write those letters in German, at least the older two do, because then their bunk mates won’t be able to spy, and they will come off as cool.

Not that it’s odd for me to write letters in German; well, letters maybe, but emails no. But it is odd to write to my children in German when ordinarily any written communication between us is English texting abbreviations.
I can send my sons emails through the bunk1 system, so that feels a little less out of the ordinary. However, my daughter’s camp is still old school: Letters are the only way to communicate. So letters we write. In the end, those letters are precious.

Seeing my daughter’s handwriting on an envelope in our mailbox warms my heart like few other things do.

And her quirky German spelling is endearing.

In this day and age, when communication is supposed to be instantaneous and intangible, I am left to await the clonk of the mailbox to perhaps get word from my children.

I can email our boys but they can only write letters back. Another oddity was to slip sheets of paper, envelopes and stamps into their suitcases. My hopes aren’t up that we’ll receive a lot of letters from them. They are having too much fun. The two obligatory letter-writing sessions imposed by camp will probably yield the only letter we will get.
The parent-child letter connection isn’t the only one that camp promotes. Today I got an email from the mother of one of my daughter’s friends with that girl’s camp address. Apparently the girls had agreed to write to each other.

So here we have two fifteen-year-olds writing each other old-fashioned letters to keep in touch over the summer.

This has something endearing but also timeless to it.

Even though writing letters is more cumbersome, and I have to make sure I plop my letters in the mailbox before the 10 a.m. pickup, there is something wonderfully everlasting about that way of connecting. Maybe because more effort went into it in the first place.