Hemingway on Writing: Stop When You Still Have Something to Say 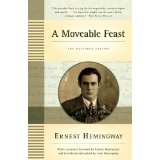 Today is the 50th anniversary of Ernest Hemingway’s death.

An article by Jeffrey Meyers in the Wall Street Journal on Hemingway’s literary achievement reminded me of that. He died, sadly by his own hand, on July 2, 1961.

I thought it would be a fitting tribute to share one of Hemingway’s insights into writing that really made a difference to me. For all the tumult in his personal life, he was an amazingly disciplined writer. I think much can be learned from his approach to writing.

One was his famous goal of achieving and logging a certain word count every day that he was working on a project.

This was before you just had to click “Word Count” in your word processing program! His steadfastness in his writing probably accounts for his steady output. As Jeffrey Meyers puts it, he “wrote at least one great work in every decade of his career.”
But what really made a difference to me in my own approach to writing is this insight he shares in his memoir of his years in Paris, A Moveable Feast:

“I had learned already never to empty the well of my writing, but always to stop when there was still something there in the deep part of the well, and let it refill at night from the springs that fed it.”

My standard approach, before I read this, was to write until I was exhausted. I used to write until I had said everything I wanted to say, until a certain chapter or point was completed. But during my first writer’s residence at the VCCA, I tried Hemingway’s approach. I found it worked much better, especially when you’re working, like I was then, on the first draft of a book-length manuscript:

Stop when you still have something to say so that the next day you know exactly where to begin.