Some impressions from the Big American Road Trip with my family, driving from Chicago to explore the Southwest this summer. 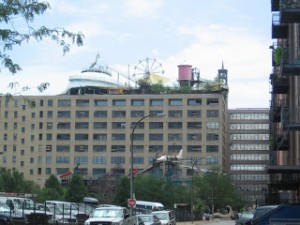 City Museum St. Louis – the name does it a disservice. This is by far the coolest children’s museum ever.

Someone with a love for quirky junk turned an old shoelace factory into a giant wonderland. I mean who thinks of putting a Ferris wheel on a roof? We made for that first, despite the fact that it was 100 degrees outside. Luckily, there was still a breeze up there and a fountain to cool off in. Inside, you can crawl through tunnels laid in ceramic mosaic, swoosh down a few stories on super slides, swing from ropes, ride a toy train, etc., etc. Our kids didn’t want to leave. 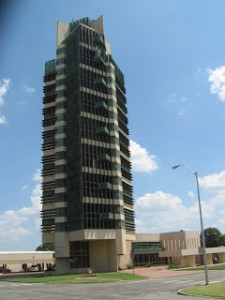 In Bartlesville, Oklahoma, we visited a good friend and got to check out the only high-rise Frank Lloyd Wright actually built: the Price Tower. Nineteen stories high, completed in 1956, recently renovated. It now houses an arts center, an inn and a bar. I found it a rather odd, angular apparition in the midst of an Oklahoma prairie town more renown for being the old headquarters of the Phillips Petroleum Company.

Speaking of oil, Woolaroc, not far from Bartlesville, is one of those out-of-the-way sites that turns out to be a gems.

Created by Frank Phillips, founder of the Phillips Petroleum Company, it’s a stunning wildlife preserve and also one of those museums that has an appealing dustiness to it. By which I mean it is truly a museum, showing off a collection of Native American artifacts, showcasing early pioneer and cattle ranch life, as well as explaining the beginnings of the oil industry in Oklahoma. From an animated display I finally understood how those “horsehead pumps” actually suck up oil from below the bedrock. I liked that they are self-sufficient, powered by the gas that naturally comes up with the oil. 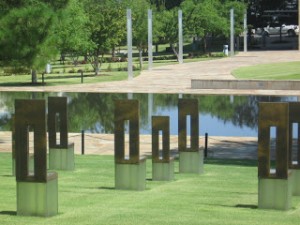 I’ve already written about our visit to the Oklahoma City Memorial but I focused on the museum, and I do find the outside memorial equally impressive. As I’ve said before, I’ve visited many memorials for horrible atrocities, and I am always amazed that anyone could conceive of a site that could actually do some justice to the gravity of the tragedy.

The chairs at the Oklahoma City Memorial, especially the smaller ones to commemorate the 19 children who were killed, does just that. What could be more appropriate to symbolize a lost life than an empty chair?