After catching our breath at the alpine views of the Rocky Mountains, and before that, the stunning canyonlands, it was, in an way, soothing to hit the undulating grasslands of eastern Colorado, and then the flat greenery of Nebraska: space to breathe and think, and to watch the clouds. 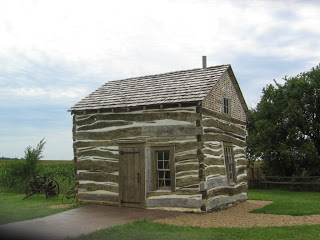 I contemplated driving straight through, with only a stop at the Iowa State Fair, but I am glad we made the 40 mile detour from I-80 to visit the Homestead National Monument in Beatrice, Nebraska.

I knew the Homestead Act had a huge impact on the settling of the American West, and I figured after so much nature, a bit of history would provide us all with some perspective. How did people actually live 150 years ago when the landscape we now associate with endless cornfields was open prairie? 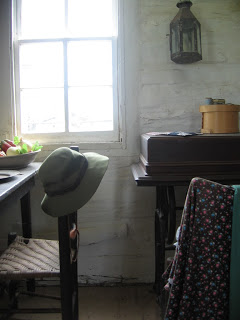 The Homestead National Monument provides a good glimpse into that life, but it also provides the historical context.

It addresses the issue of the Native Americans, who suddenly found their land given away, the barbed wire that put an end to free-roaming cattle, the endless wind that would blow away the fertile top soil that the prairie grasses had held in place for centuries. And the interesting fact that the Homestead Act was passed in 1862: In the midst of the Civil War they had time for this? But as it turns out, one consideration was that the federal government wanted to make sure the western territories would not be claimed by sympathizers of the South. Thus an “orderly” approach to settling the West was the goal. 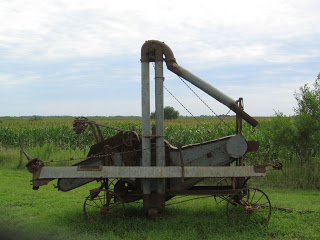 Walking the rather flat loop trail through the open prairie was a reprieve for our mountain-terrain-trained legs. The air was so delightfully fresh! There was some humidity again, not much, but enough to sniff the fullness of the air rather than suck on our Camelbacks for moisture. 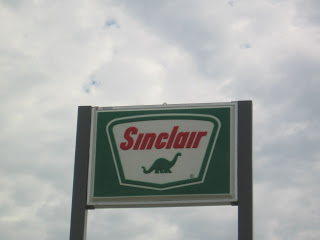 Last but not least, I had to take a picture of a Sinclair gas station in Nebraska – we do not have them where I live. They have a wonderfully retro feel to them, and I fell in love with their green dinosaur.