My report from our road trip to the Southwest continues, this time with a program in contrasts:

The Texas Panhandle is flat, so flat you feel some higher power must have tried out the new iron there.

Not that the cornfields in Illinois and Indiana, where we come from, aren’t flat, but at least they grow tall corn! Here it’s flat yellowed grass on cardboard ground. You’re lucky if you spot some cattle off in the distance.

All of a sudden, however, the ground does open up to reveal the beauty of the Palo Duro Canyon, or as it is often referred to, the Grand Canyon of Texas.

We arrived early but, since the park doesn’t open until 8 a.m., not early enough to escape the heat that builds up at the bottom of this canyon.

For we had to hike – we’re all avid hikers.

The boys were thrilled to find gypsum deposits slated into the otherwise red rock a quarter of a mile into the Sunflower Trail. Unfortunately that trail is poorly marked.

We got off course twice – not exactly what you want to do once you’re out of the shade, and the temperatures are creeping towards 100F. Nevertheless it was fun, and we were mighty proud of ourselves once we returned to our wonderfully air conditioned car.

Then we were off to Santa Fe, where I was all excited to take my family to the Georgia O’Keeffe Museum. Sadly, I was gravely disappointed.

I expected a museum dedicated to Georgia O’Keeffe, full of her paintings and replete with information about one of my favorite painters. Not so. Out of nine rooms, only one showed O’Keeffe paintings, the rest is currently devoted to the exhibit Shared Intelligence: American Painting and the Photograph. And even that room isn’t done particularly well. In the audio guide the explanation of one flower painting repeats itself on another.
I asked one of the ushers and she explained that the museum typically operates like this, i.e. changing exhibits with only a fraction devoted to O’Keefe.

Apparently I was not the only disappointed visitor. I overheard others ask her where the O’Keefe paintings were while I left a comment in the visitors book.

I ended up flipping through coffee table books in the gift shop to show my daughter some of my favorite O’Keefe paintings. 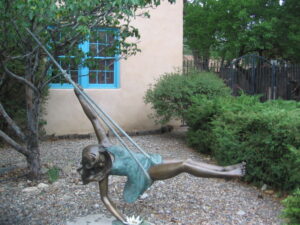 Later that day my daughter and I later ventured to Canyon Road to be happily surprised by all the fun art we found outside of the art galleries even though we showed up after closing.

One example is this girl swinging off a tree outside the Reflection Gallery. Her “rope” cleverly ends inside the branches and the sculpture is actually carried by her hand scooping up the sea lily. Unfortunately, the sculptor’s name was not displayed – I would love to thank him or her for this delight.