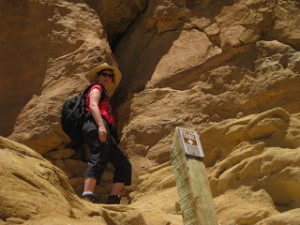 The road trip report continues: Here I am in full hiking regalia, ready to tackle what turned out to be a rather tough climb to a plateau overlooking Pueblo Bonito, the best preserved ruin in Chaco Culture National Historical Park. We stopped there on our drive from Santa Fe to Durango, Colorado. Off the beaten path, the park lies 21 miles off SR550, mainly down on a rattling dirt road through a desert of rolling hills. The sage brush is so grey I was amazed it grows there at all. 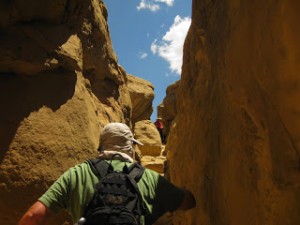 Of all the hikes we’ve done so far, my boys still list this one in Chaco Culture NHP as their favorite even though we did it in 90F degree heat and full sun.

They loved having to make their way along an ancient trading route that leads through a crack in a giant rock formation. 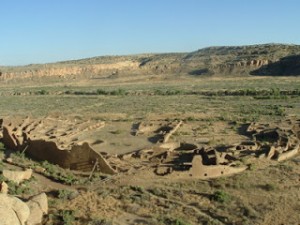 The view of Pueblo Bonito – reached after marching along a plateau for about a mile – is truly rewarding.

The ruins at Chaco Culture, especially Pueblo Bonito, look like an ancient fortress to me. They can really only be appreciated when you see their whole layout, which of course you can only do from above. 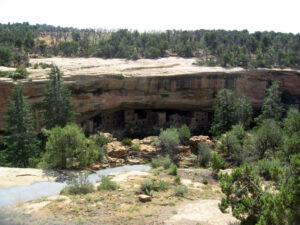 The next day was my second visit to Mesa Verde. Again, I found it a magical place.

To me, those dwellings tucked under the mesa overhangs are a fairy tale come true.

Seen from above, they seem like real life dollhouses. The hordes of tourists mulling about don’t take away from their allure. 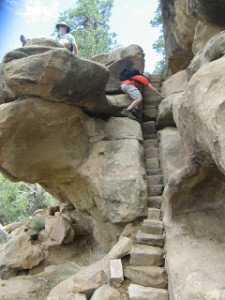 We escaped the crowds by hiking the Petroglyph Trail only to run into the brother of a friend from Chicago! Goes to show that this world is indeed small.

The Petroglyph Trail was almost a repeat of the one we had done at Chaco. We were navigating over boulders, in between rocks, and up and down stone steps. At least we were in the shade on the way to the petroglyph panel. 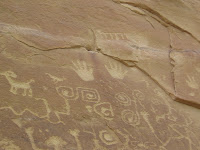 The trail hugged the mesa about 100 feet below the top. Then a step climb to the top and back baking in the sun, with lots of lizards skipping the hot rocks as we approached. 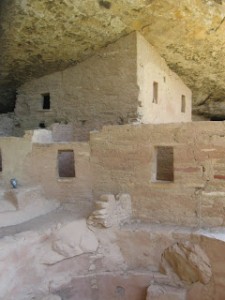 With aching thighs we nevertheless marched down the mesa again to inspect Spruce Tree House. It’s the best preserved cliff dwelling at Mesa Verde, and the one that you can tour by yourself.

One tidbit that I remember from the guide book that disenchanted me a bit: The Anasazi had trash dumps in front and in back of what we now call their “palaces.”

But then again, they lived there, and daily life does create trash. Plus their trash helps archeologists figure out all kinds of things about them. That has me wondering what our trash might tell people a thousand years from now about us?