One way to keep family members happy on a long road trip is to ask beforehand what each one of them would most like to see or do, and then to plan for that.

My husband’s “must” was a trip down the Colorado River. I knew we wouldn’t be up for a multi day journey, which seems to be the only thing available in the Grand Canyon itself.

So I booked a tamer float down the Glen Canyon.

Getting everybody up by 4:30 a.m., vacating the hotel, loading the car, and stopping for breakfast at Denny’s to get us to the meeting point at 7:00 a.m. was the challenging part. But we made it, and I am thankful we did the earlier trip.

It was still shady and cool when we climbed onto the float at the bottom of Glen Canyon Dam. Descending the 2-mile tunnel to base of the dam was exhilarating.

The floating trip itself was more serene than I expected.

There were four rafts and about 20 people per boat. The floats go down the river with a good distance from each other, so you can take pictures without blue boats in them. Pretty soon into the trip everybody was in awe of the scenery, and thus quiet. I came to understand a bit more about the geology of the canyonlands:

Glen Canyon with its stunningly vertical walls is a fairly “young” canyon. Its steep rocks haven’t been exposed to erosion as much yet (in geological terms). Thus they look as if freshly cut out of the red rock by an enormous chain saw.

Thanks to the dam, the river now doesn’t flood anymore, which means vegetation can flourish as it isn’t wiped out by spring floods anymore, and so the interplay of red rock and sage greenery and clear blue sky is breathtaking. 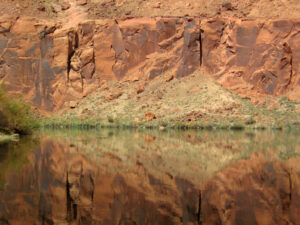 While I expected stunning scenery, I didn’t expect that this trip would remind me of the many boat trips I took down the narrow Rhine River valley with my grandmother, downstream from Wiesbaden.

There couldn’t be a greater contrast between the barren walls of the Colorado River valley, with no sign of human habitation along its banks, and the steep wooded cliffs along the Rhine that are studded with villages, medieval castles and vineyards on their upper slopes. 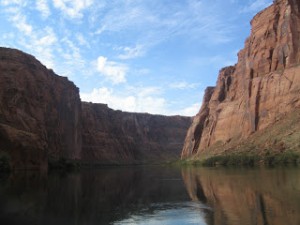 Nevertheless the sharp bends in the Colorado that obstruct the view until the boat drifts through the curve had me reminiscing about the Lorelei Rock that juts into the Rhine. The tight Lorelei passage creates treacherous currents, which inspired the myth of a golden-haired maiden sitting up on the rock to distract poor fishermen.
Being carried by the motion of a stream with the cool air wafting off the water added to the similarity in experience.
Goes to show you never know what memory will be triggered when!
Annette Admin2021-10-18T21:43:46-05:00August 6th, 2011|Tags: Place, Road Trip|