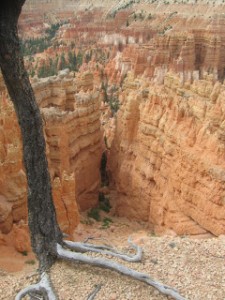 I haven’t quite figured out yet what it means to visit great places like Bryce Canyon, the Grand Canyon, and Zion National Park a second time, except that it is a privilege.

I was fortunate enough to visit these national parks again, now with my family in tow, after having seen them 22 years ago when I did my first big cross-country road trip with my sister.

One aspect of me having been there before is that my family deferrs to me: “So what is there to see?”

How could I possibly describe what there is to see in Bryce Canyon?

You can’t even describe it! Yes, it’s created by erosion and is full of hoodoos, as the rock formations are called, but what makes it different from other canyons?

You will grasp what it is when you spot it for the first time.

Perhaps, if you’re lucky like me, you will take another deep breath when you see it for the second time. 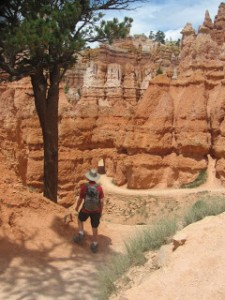 Bryce Canyon: Hiking the Queens Garden Trail back up to the rim after going down the Navajo Trail

Ah yes, this is why people drive miles to see this, and hike hours in the heat to see it from the bottom, and to press their shutter buttons a thousand times to catch this view or that formation. 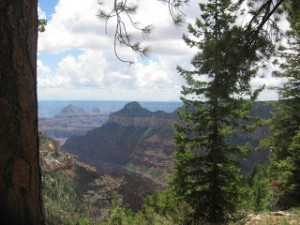 Based on my two prior visits to the Grand Canyon, I chose to go to the North Rim again.

The North Rim is less crowded and cooler, and the sites are just as – well, grand.

Luckily, we even found a shady, moderate trail that not “everybody and their mother” was on, to quote one of my sons. After the rather crowded hike we’d done in Bryce, he wanted peace. The Widforss Trail winds up a wooded mountain side and, through the pines now and then, provides breathtaking views of the Grand Canyon. 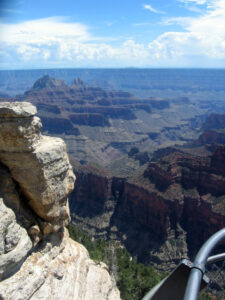 On our way back, a thunder storm chased us. We made it to our car just before it started to rain. So, we experienced the wide open views of the Grand Canyon from the North Rim Visitor Center right after the air had been washed clean.

Driving into Zion National Park from the east, the rocks look as if scraped into their conical shapes by some some giant wire brush. The hairpin curves and steep inclines reminded me of another such road – the Going-to-the-Sun Road in Glacier National Park. In contrast, however at Zion the rocks are that rich, russet red.

Zion is also a furnace as it gets hotter as you descend. By 11 a.m. it’s 90F. We opted to arrive early to take the shuttle (the main part of the canyon is closed to traffic) and were hiking to the Emerald Pools at 8 a.m. 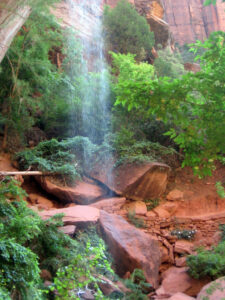 On our way up, we were rewarded by a fairly serene trail that was swarming with people on our way back. We made it all the way to the Upper Emerald Pool. Having done that I must say the Lower Emerald Pool is, in my opinion, the most beautiful.