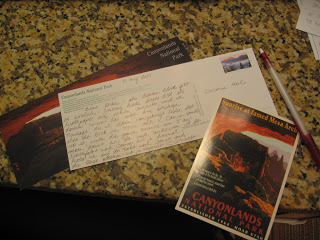 This summer has revived the art of writing letters and postcards for me.

While my daughter was at camp, the only way to communicate with her was to write her old-fashioned letters. So I did. And she wrote back.

Our road trip had me pick up my old love for writing postcards, sending greetings to friends and family as I thought about them on our vacation.

I especially thought about my sister, not only because this road trip retraced, to some degree, the one she and I had taken many years ago. She was also on my mind because, on the second day of our trip, I found out that she’d suffered a mountaineering accident and was in a hospital in the Italian Alps. While all her wounds and breaks are expected to heal, her recovery will take a long time.

I started sending her a postcards every day to cheer her up. Some to remind her of places we’d been together, some to introduce her to new sites and vistas, and all to say “Get well soon.”

We did talk on the phone, too, but not that frequently as the time difference made that difficult. But she told me that the stream of almost daily postcards cheered her up. And it gave me a small way to do something for her and also include her in my experience.

Writing postcards is an old tradition in our family.

On mutual vacations, my sister and I would sit at a café table, often on the last day of the trip, to write a stack of postcards. Sometimes my hand would ache from all that scribbling, but I would tease her that it took her much longer than it took me to get through the stack.

Funny enough, not only I was writing postcards, my daughter was too, sending greetings to her friends who had remained at camp.

Together, our daily challenge was to find an actual mailbox.

It seems that in many rural towns you can only find them at the post office. We got good at finding post offices.

The habit of writing postcards seems to not yet be extinct as the gift shops at each destination, be it a national park or a museum, offered at least one carousel of postcards.

I do that, too, as I sometimes feel a postcard captures a view better than I could. So there my daughter and I were, looking through the offerings to find postcards with views we liked, just like my sister and I used to do, to either send them or keep them for ourselves and the scrapbook we hopefully will put together some day.

A family tradition lives on.