Today is the last day of November, an appropriate time to share with you my favorite poem, Herbsttag (Autumn Day) by Rainer Maria Rilke.

Many of you probably know him as the author of Letters to a Young Poet, a classic in the literature about writing and finding a vocation. However, Rilke is one of the “big guys” of German literature, and I find something I respond to in most of his many, many poems. 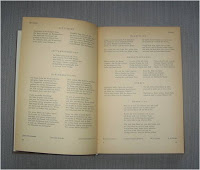 I fell in love with Rilke’s poem Autumn Day as an adolescent, leafing through one of my grandparents’ anthologies of German poetry called Kranz des Lebens (wreath of life).

I made sure that particular book made it to my bookshelf after my grandmother died. It is now a beloved yellowed friend. As I paged through it yesterday, I wondered about its history. I wish I knew why my grandparents had this particular book. It was published in 1955 but there’s no dedication in it, nor is my grandfather’s name on the list of editors (it is in many other books they had). Maybe this anthology had less meaning to them than it has to me now.

I looked long for a translation of Herbsttag that I felt comes close to the original German, particularly the last stanza, which is the part I really cherish.

I think I fell in love with the phrase “lange Briefe schreiben” (writing long letters) as that is exactly what I did as a teenager, but those last five lines capture the melancholy of autumn so perfectly.

I was reminded again that translation is always, at best, an approximation.

For example, the word “Alleen” means roads lined with trees on both sides. In German “Alleen” immediately conjures up that image – in English, no such word exists. Anyway, enough waxing, here it is, first in the original, then the translation.

This translation is by J. Mullen:

Lord: it is time. The summer was great.
Lay your shadows onto the sundials
and let loose the winds upon the fields.

Command the last fruits to be full,
give them yet two more southern days,
urge them to perfection, and chase
the last sweetness into the heavy wine.

Who now has no house, builds no more.
Who is now alone, will long remain so,
will stay awake, read, write long letters
and will wander restlessly here and there
in the avenues, when the leaves drift.