Today was the last day of the Dr. Seuss and the Art of Invention Exhibit at the Museum of Science & Industry.

Thanks to my daughter, who purchased tickets in advance, we actually made it there. Not that we couldn’t have gone before, but how often have we missed great exhibits in our very own city, thinking, oh yeah, we will get there, and then they are over?

But the Dr. Seuss exhibit we really had to see, for his rhymes and characters are part of our family language.

I am sure they are for many other families. Most prominent from my own childhood is Horton the Elephant from Horton Hatches the Egg. Many a time my mom would repeat this rhyme to emphasize a point: 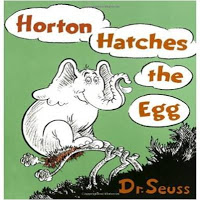 “I meant what I said
And I said what I meant….”

Sometimes we children would chime in:

“An elephant’s faithful
One hundred per cent!”

The “somebody” from The Cat in the Hat Comes Back became a bonmot with my own family: Whenever something needs doing, we’ll ask who the “somebody” is going to be.

This is based on:

“When our mother went
Down to the town for the day,
She said, ‘Somebody has to
Clean all this away.
Somebody, SOMEBODY
Has to, you see.’
Then she picked out two Somebodies.
Sally and me.”

Unfortunately, picture taking was not allowed inside the exhibit, which featured many original artworks by Theodor Seuss Geisel, a.k.a. Dr. Seuss, so I can’t share any pictures here.

I was most struck by his creative process, which was meticulous, to say the least.

Of course the exhibit was geared towards children, but I nevertheless was interested in his artistic approach, even though this is the curator’s interpretation, not an explanation by Dr. Seuss himself. Thankfully, I had my notebook along, and taking notes was not prohibited.

So here is how the exhibit portrayed his creative process:

4. Get under your influence (i.e. utilize what influenced you. Dr. Seuss’s father was a zookeeper. Not surprisingly then, did Dr. Seuss know a lot about animals, and in the end preferred to create his own many times.)

6. To rhyme or not to rhyme (translation for me: study more how rhyme and meter work. Dr. Seuss often used amphibrachic tetrameter:

“And now comes an act of enormous enormance,
No former performers performed this performance.”)

8. Do the details (Dr. Seuss labeled every color in each drawing to match the printers’ color charts so he could make sure they would use the correct colors.)

Even if he didn’t exactly work in that order, surely all these steps were taken at some point. Clearly, here’s someone who worked very hard, knew his medium very well, and wasn’t afraid to experiment.