Typical tourist pictures of Shanghai probably start with the Bund, i.e. views of the famed riverfront, preferably at night when it’s not bathed in Shanghai’s hazy bright light.

That is probably why I haven’t shared Bund pictures yet in my Shanghai photo essay series – it is where all tourists, including me, start. You have to see it, but then you move on. That’s why I will also keep this short, and will share, in an upcoming post, more of what goes on right behind the Bund, where some stunning art deco architecture is to be found. But no series of Shanghai would be complete without the Bund, so here we go.

At night the skyline of Pudong, the financial district that’s grown up during the past 20 years, commands the view across the Huangpu River.

The river is busy with boat traffic, even at night. The street lanterns of the Bund boardwalk dot the bottom of the picture. 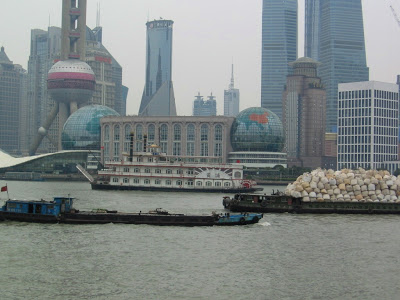 Here a daytime (and thus rather gray) close up of river traffic, including a not so glamorous garbage boat, against the backdrop of the Pudong skyline with the pink sqhere of the Pearl Oriental Tower and the two globes of the Shanghai International Convention Center.

I have not seen a river that busy with traffic, and I’ve seen my fair share of large rivers. 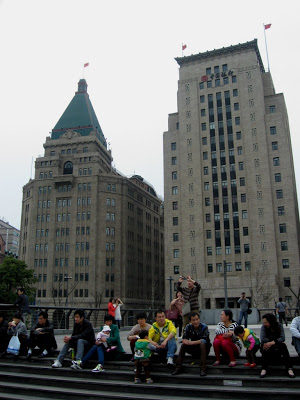 The most famous manifestation of Shanghai art deco is the Peace Hotel, formerly the Sassoon House, built by Victor Sasson in the 1920s.

Here it is seen from the Bund boardwalk. It’s the building to the left with the steepled green roof. A nice coincidence: I visited Shanghai at the end of March, which happened to be the beginning of an extended weekend due to one of the Chinese national holiday Qingming (the sweeping out of the tombs – a Chinese version of Day of the Dead). Therefore, a lot of tourists were in town, not Westerners like me, but Chinese visiting from all corners of the country. Here a group is taking a break on the boardwalk.

Here’s another group enjoying their time off from work on the Bund boardwalk. 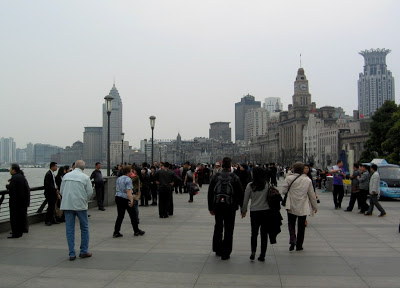 The boardwalk was crowded on that Thursday afternoon, but my friend told me it’s pretty much always like that. This is looking south, the clock tower of the Customs House is in the background to the right. 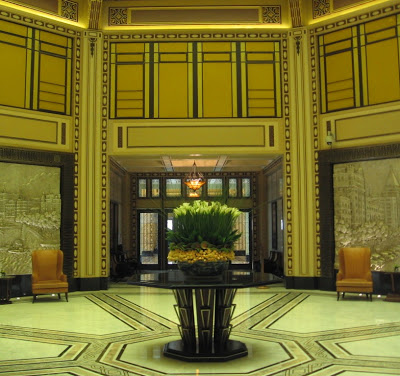 Here, for a change, an inside view: the lobby of the Peace Hotel. 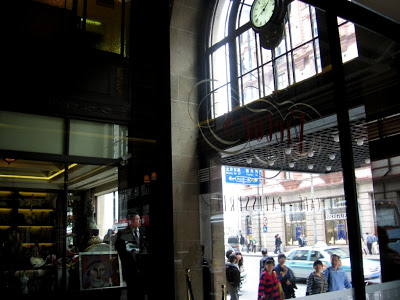 The Peace Hotel entrance as seen from Victor’s Café. It reminded me very much of similar art deco passage ways in Prague. As I was rather jet-lagged by the time we sat down in this café, I kept doing a mental doubletake on where I was. 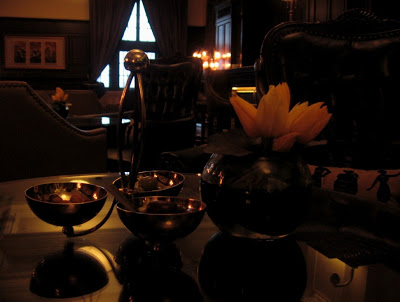 Another evening we hung out at the Long Bar in the Astoria Hotel on the Bund, where I was utterly charmed by these art deco-style nut bowls.

After touring a good deal of Shanghai, I appreciated even more why the Bund is famous.

There is, of course, all the history, and the grand turn-of-the-century architecture.

Mainly, however, it is Shanghai’s only great vista. It’s the only place where you can see far and wide.

Well, maybe not that far, but at least you can look out on water and boats, something besides never-ending clusters of buildings. (One caveat: The Shanghai World Financial Center in Pudong does offer an observation deck, but I was warned, by one of my friends who works there, that the trip is seldom worth it: The air is too hazy to see much.)
Annette Admin2021-09-23T21:46:10-05:00May 29th, 2012|Tags: Architecture, History, Photo Essay, Shanghai, Travel|