My kids and I biked Lake Shore Drive back in May.

It’s taken me this long to report on our experience because I was hoping to share official photos. After all, we had the registration numbers properly affixed to our chests and helmets. Alas, our “bib numbers” did not show up in the photo lineup. Even though I was stubborn enough to comb through their nearly 9,000 “unclaimed” photos, I found none of us.

But an experience can still be memorable without photos that put you into the action, right?

I do have a few shots I took with my cell phone, with one hand, while riding. I think they actually give you a nice feel for what it’s like to ride your bike on one of America’s scenic highways with no cars for competition.

We were astounded how easy it was to bike the Drive.

What a smooth ride! Getting all the way downtown is way more comfortable on the Drive than on the bike path that runs along the very same lakefront. Maybe because, all of a sudden, you’ve got all that space. The road surface is a lot smoother, too. 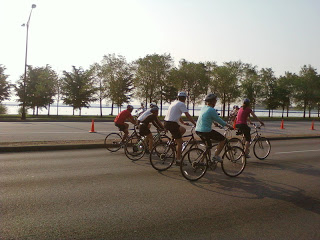 A group of fellow riders going south along Grant Harbor. This was already the return trip for us as we only did the southern leg of the route. 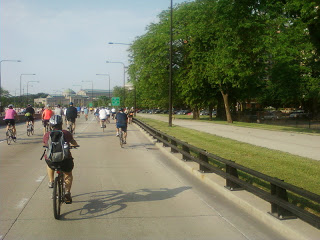 This was taken at pretty much the same spot as the previous photo, just looking straight ahead, with the Field Museum in the background. As you can see, it’s still early in the morning (about 7:15 a.m.). Shadows are long and coming from the East.

All in all, biking the Drive was fun, and I have my daughter to thank for pushing me to sign us up.

Physically it was less demanding than I thought. As we did it early and were able to start at the southern end of the Drive, right where we live, the crowds were not that bad, especially on the way in. But even downtown, when we picked up our event t-shirts, the crowd was friendly and rather civilized. So my “crowd” excuses did not hold. I have a feeling a new family tradition was born…