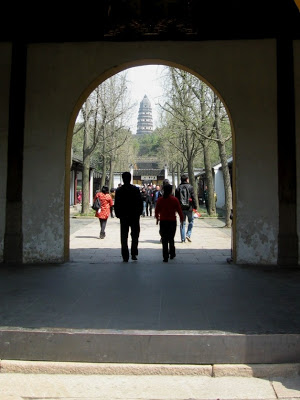 These days I am craving some serenity (Our kids’ school year is over and the summer chaos of camps, summer school and entertainment has begun.), so I thought I’d put together a photo essay of the first garden I visited in Suzhou, a city of famed classic Chinese gardens, about 1.5 hours from Shanghai. King He Lu, who died in 496 B.C., is supposedly buried here, and according to legend a white tiger came to guard his resting place; thus it is named Tiger Hill. Here a view of the leaning Yunyan Pagoda on top of the hill, as seen through one on the park’s entrances. 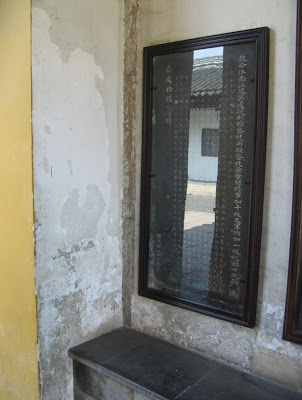 At the entrance of each of the classical gardens in Suzhou, stone tablets like this one tell the story of the garden:

The initial owner’s intentions and plans, subsequent developments, as well as visitors to the gardens, or poets’ thoughts on them.

This picture is perhaps not so serene, but this is how my friend, our guide, and I found Tiger Hill: crowded.

We were visiting on the weekend before the holiday of Qingming (the sweeping out of the tombs – a Chinese version of Day of the Dead). Therefore, a lot of tourists were visiting, not Westerners like me, but Chinese coming from all corners of the country. 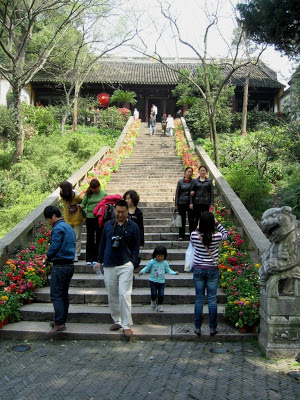 My companions told me that the abundant flower displays aren’t always there, and had been brought in as holiday decorations (They were all in pots.). Here also, a rare sight: a child. Coming from the U.S., where on a weekend a park is teeming with kids, I was keenly aware of the long-term effects of China’s one child policy. While it isn’t enforced anymore, it has permanently reshaped the Chinese family: For those who grew up in the 60s and 70s, being an only child was their world, and thus, our guide confirmed, they themselves are not having more children, if they have any. 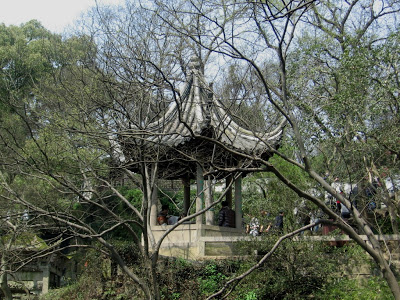 Going up the stairs, a view of one of the gazebos.

Here, that same gazebo’s roof spotted through the windows and doorway of one of the garden rooms at Tiger Hill. The only thing one could compare these rooms to would be a sun porch, except that they are not necessarily attached to another building. They feature windows all around, often with elaborate lattice work that frame the view beyond. 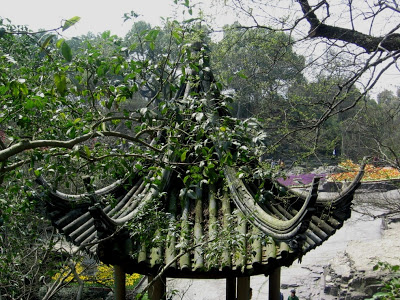 Here a close-up of that same roof with all the festival’s flowers in the background. 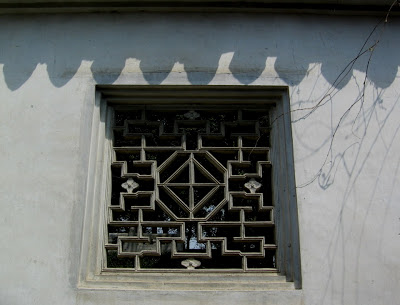 Along the passageway by the garden room, a white washed wall features another window framing nature. Our guide explained that none of these lattice patterns repeat themselves. Each window in a classic Chinese garden is unique. 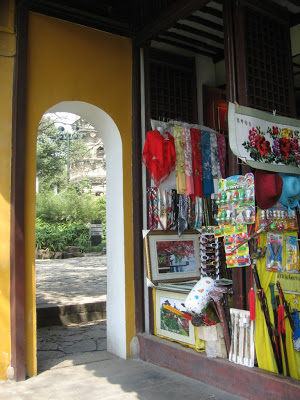 Commerce must not be forgotten. A shop on top of Tiger Hill with a view of the Yunyan Pagoda through the archway. 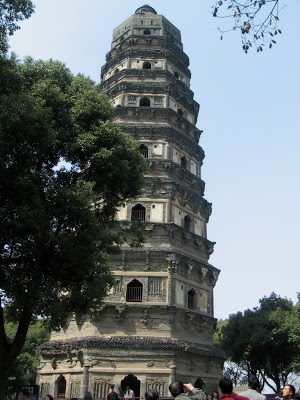 You can see, can you not, why the Yunyan Pagoda is called the “Leaning Tower of China.”

According to my National Geographic guide book, it was built during the Five Dynasties Period (907-960) on ground that was rock and softer soil, and thus the tower began to tilt over time. It has been repaired many times, most recently in 1957 when concrete was poured into the foundation. It is 154 feet (47 m) tall, and the difference in angle between the top and the bottom is 7.6 ft (2.32 m). 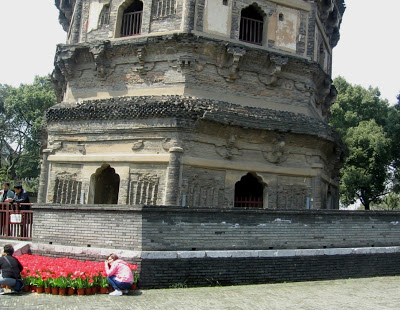 Here you can really see the tilt, and some people having fun with it, and those flowers again. 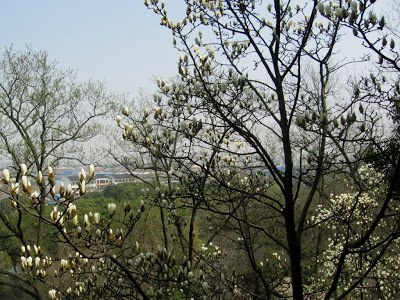 Tiger Hill lies on the outskirts of town, and the city’s less picturesque industrial sprawl can be seen through these budding magnolia tress on top of the hill. 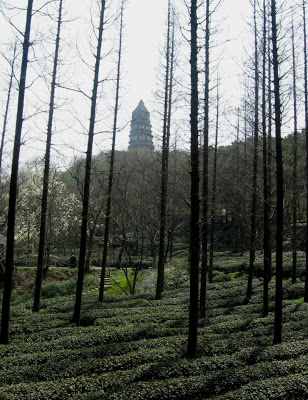 View of the tower through the still naked trees on the other side of the hill.

The moat around Tiger Hill

A slice of life in contemporary China: Fishermen sit under that silver umbrella, hoping for a catch from that thousand-year-old canal. Their nets swing from the old wall with its lattice-work windows (notice that each one has a different pattern), and laundry is hung out to dry from a rather utilitarian building right behind the wall. 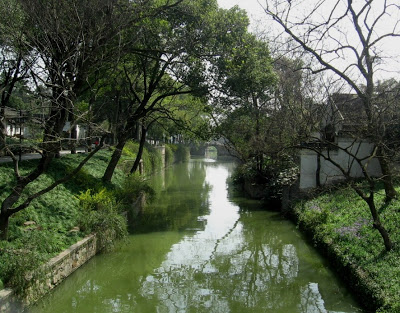