Why It’s Important to Have Your Own Library 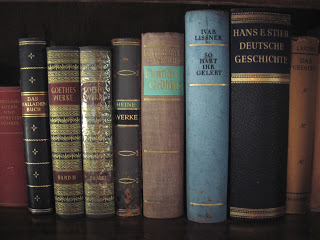 Some of my grandfather’s books, now on my bookshelf

When my grandparents were expelled from their hometown in Czechoslovakia after World War II, they lost their house and all their possessions. However, my grandfather most lamented the loss of his library.

When he later tried to regain entry and claim, in vain, Czech citizenship, he tried to attach some value to his library. It contained not only all the volumes that were dear to him and that he had amassed over the years of teaching German, Geography and History, editing a newspaper, writing theater reviews and his own poems, plays and stories. He had also inherited his father-in-law’s library, who had been a writer, poet and lover of German literature. Between the two of them, it was quite a collection.

My young grandmother and her father (my great-grandfather) in front of the bookshelves in his library.

It took me awhile to appreciate his loss because, when I first came across his letters to the Czech government and his claim forms listing his library, I thought to myself, what’s the big deal?

You can always buy books again, can’t you? And why do you need to have all those books? They are such a nuisance when you move, voluntarily, of course, in which case you schlep them along in many heavy boxes.

Over time I have realized that some books you cannot buy again.

They go out of print, or are written in a script no one can read anymore (such as some of my books in old German lettering that I can still read, simply because I was stubborn enough as a child to plow through them).

But a library is so much more than a bookstore. It’s a reflection of who we are if we are the kind of people who read and care about books.

I was reminded of that again the other night when I could not find the readings for the memoir class I am teaching that starts next week. I did have my old syllabus, and while I tweak it a little every year, I pretty much use the same memoir excerpts. Could I recreate those readings? Did I have all the books? Turns out I had most of them, but not all. It was more disconcerting, though, that if I had indeed lost those Xeroxed copies of chapters and passages, I would have also lost my notes on those readings, unless they were in my books.

That’s one of the beauties of my own books: They have my markings in them.

Underlining here and there. Flags attached to a passage that I like to use to show how to write about smell, for instance, or pages that are dog eared because I loved a particular phrase. Those kinds of things you cannot recreate by buying a new book if you’ve lost your library. (I did find my packet of readings again, thankfully.)

Another thing: A personal library is instantaneous.

The books are right there. Some of the books from which I had copied readings were from the public library. Getting another copy would have taken time, which I didn’t have much of as I tend to assemble materials at the last minute. The same goes for buying books, whether online or at a store. So I decided, right then and there, to put those missing memoirs in my Amazon shopping cart to extend my own memoir library.

There’s also a certain inheritance that comes along with a personal library. What kind of books you have says something about who you are.

They are, in a way, a giant diary. This summer, my daughter had to read The Merchant of Venice for her AP English class. I was almost giddy with joy when I told her we didn’t have to buy the book because I have a full collection of Shakespeare’s plays. A few weeks later she was worried that I’d be upset that my copy of The Merchant of Venice, a Penguin paperback from the 1980s, had fallen apart at the spine while she was reading it. On the contrary, I was happy that it had gotten such good use. We can always reassemble it and stick it back into that row of paperbacks on the shelf, and it will be a testament to our reading habits. 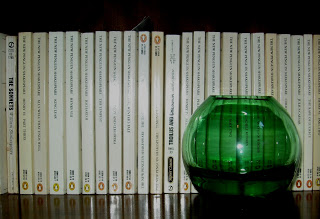 Living in post-war West Germany, my grandfather was never able to build the same kind of library he had had before.

However, I do have some of his post-war books that now seem old and precious, see title image. How much more precious would it have been had my siblings and I inherited his library and, along with it, our great-grandfather’s! We did not know our grandfather well as he died when we were very little, and we never met our great-grandfather. But I am sure that we would have met some of their personalities hidden in those books.