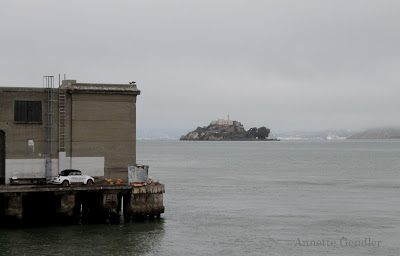 Pulling out of the dock, Alcatraz comes into view.

We had the perfect slightly gloomy day when we visited Alcatraz on our family vacation to California in August. Touring Alcatraz is obviously a rather touristy thing to do. (It is San Fransisco’s No. 1 tourist attraction.) However, it was also the No. 1 thing our younger son wanted to see on that trip. Neither my husband nor I had been there either, so we did it. Beware though, you’ve got to book your Alcatraz “cruise” at least a month in advance!<br>

A lone guide waited for the crowd to get off the boat. 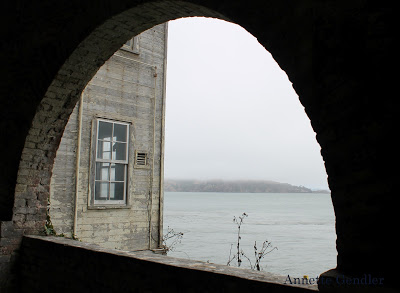 Even though there were lots of other people touring with us, my main memory of visiting Alcatraz is its serene and somewhat ethereal atmosphere.

This was already evident in vistas like this one on the way up to the main cellhouse. I hope I managed to capture it with some of these images as thankfully, the audio tour you now get to take lets you roam at your own pace. 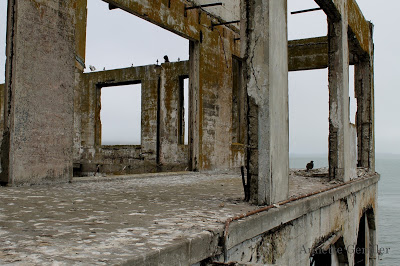 Farther on the walk up, the ruin of the former officers club. 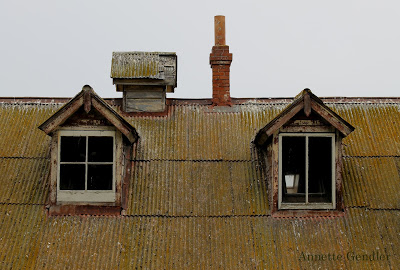 Up and up, the roof of the Sally Port building. 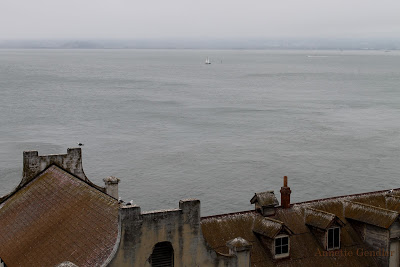 Looking out over Sally Port. 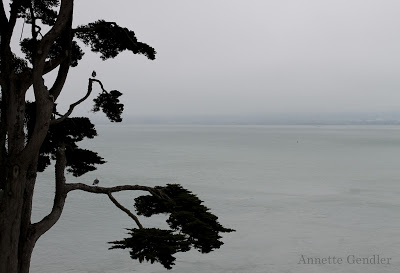 The Cypress and the Bay 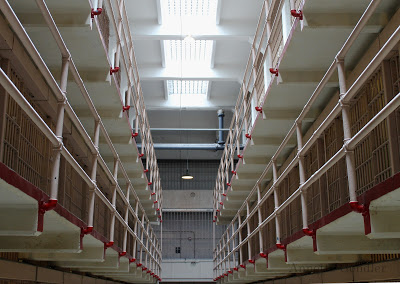 “Broadway” – one of the main cell blocks 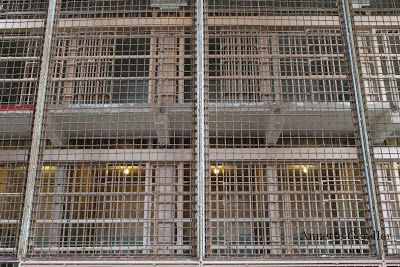 Park Ave
On the audio tour, one former inmate tells how they used to have concerts on New Year’s Eve. Everybody who played an instrument was allowed to have it in his cell, and they’d bounce a tune from cell to cell. 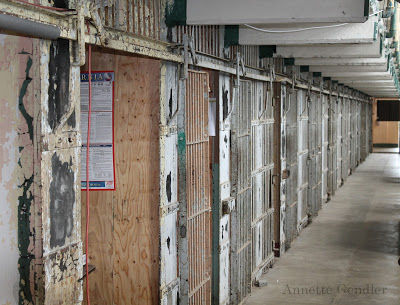 Sunrise Alley
This section wasn’t polished for us tourists and showed what Alcatraz would look like if it weren’t maintained for tours. I took this picture over the barrier. 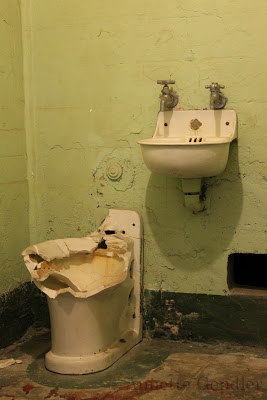 Not so serene. Bleak would be the word.

Peeking in at the library

After lining up all these images, I still think this one of the empty library shelves at Alcatraz is my favorite. 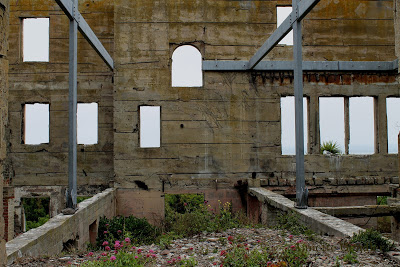 The former Warden’s House on Alcatraz, destroyed by fire in 1970 during the Indian Occupation
The Warden’s House has an almost 360 degree view of the bay, but I think this picture could be called “Empty Windows.”  On the audio tour, the daughter of the former warden shares how she grew up here as a little girl, taking the boat to school, and enjoying a rather peaceful existence right next door to some of America’s most heinous criminals. 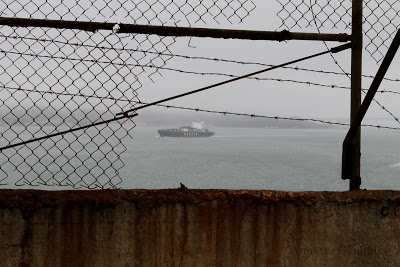 A peek through the fence of the former Exercise Yard. If you look closely, you can see the outline of the Golden Gate Bridge to the right.
If you must be in prison, I’d say you’d rather have this view than one of Midwestern flatlands or the baking Nevada desert from today’s maximum security prisons, right?
Annette Admin2021-09-22T17:16:49-05:00September 12th, 2012|Tags: Photo Essay, Place, Travel|