Why Chapter Headings Are Useful 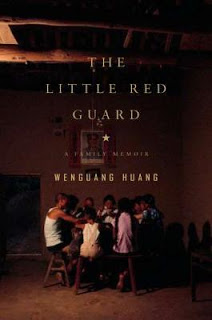 My Advanced Memoir Workshop was fortunate to host Wenguang Huang, author of The Little Red Guard, for an immensely informative Q&A session back in July. (Lucky for us, he lives in Chicago.)

His memoir tells the touching story of a worker’s family during China’s Cultural Revolution. Beneath a cloth in the bedroom, this family hides a dangerous secret: In a country where cremation is mandatory, the narrator’s grandmother insists on a traditional burial and persuades his father to build her a coffin. At the age of ten, the narrator becomes the “coffin keeper.”

Thus begins a perilous balancing act between keeping a secret to honor a tradition and toeing the party line to make a living. Over time, the coffin consumes, quite literally, the family’s savings and well-being as an ever larger web of machinations is spun to prepare for an elusive funeral.

One of my students asked Wen about the use of chapter headings in the book.

Since most of us memoir writers struggle with structure at some point, I thought I’d share Wen’s rather practical insight here:

Question: The organization of your chapters, with one word as a heading for each chapter (such as Demands, Veneration, Dilemma), simplifies the book and makes it very accessible. How did you come up with that?

Wen’s answer: The chapter headings were not my idea but my editor’s. I first organized the book around the timeline of the coffin. My editor suggested having subtitles or headings for the chapters, but I found them misleading, so I took them out when we submitted it to Penguin. After the first pass, my editor wanted me to change the end. As I went back over the manuscript, I realized that without the chapter headings it didn’t flow that well.

The great advantage of these chapter headings is that each chapter has a separate idea, so you don’t need transitions that connect to the next chapter.

With chapter headings, each chapter naturally ends by itself. The next chapter picks up its own idea. Often, transitions seemed too contrived, and with headers, each chapter can almost be its own essay. So I did add them back in. I still feel that some are not accurate enough, but some, like Mortality, work very well.