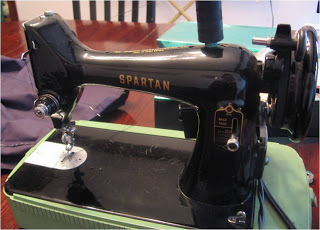 My great-grandfather’s sewing machine, still in use on my dining room table

When you write memoir, sooner or later you come upon the issue of, “Is this my story to tell?” – “What about the other people in the story?”

As with any dilemma, there is no easy answer. It is, arguably, easier to write about dead people. However, then you often run into the issue of whether you can verify those stories of the past, especially those you did not experience yourself.

When I moved back to the States, I took my great-grandfather’s sewing machine with me.

Upon arrival, I unwrapped the original U.S. motor my dad had carefully packaged in 1964 newspaper, took off the German motor, attached the old American one and voila, the machine worked again on U.S. current.

Alas, these days I mainly shorten pants with it or sew the odd costume for my kids.

But every time I take it out, I’m proud that I’m still using something that’s older than I am.

Something that those who came before me have sat at, hunched over, rattling away.

When my aunt and uncle visited last fall, I brought out this sewing machine, which used to belong to my great-grandfather, namely my uncle’s (and my mom’s) paternal grandfather. He gave it to my mom when she moved to Germany, and she in turn gave it to me when I became interested in sewing in my teens. It is a basic Singer machine that only goes back and forth. No fancy zigzag or anything like that! Nevertheless, for many years, I made almost all my own clothes with it, including a leather coat (it is a heavy duty machine) and my wedding dress.

She had been incontinent towards the end of her life, and she died before him, leaving him a widower for more than a decade. I cherish that story because I always found it rather remarkable that such a manly man as my great-grandfather sat down to sew underwear. It seemed like such a loving gesture.

Had my uncle heard that same story? I asked when he was visiting.

He hadn’t. Instead, he told me other stories about my great-grandparents. For instance, they didn’t speak to each other for a few years because of some falling out. Still lived together, ate together, slept together, but didn’t talk to each other. Remarkable, eh?

Sewing machines were not exactly on his radar as a young man. “So,” he said generously, “I think you own that story.”