While I was at the VCCA, I visited Monticello, President Thomas Jefferson’s estate. It is near Charlottesville, a good hour’s drive from the VCCA. I happened to go on one of the coldest days there, when temperatures were hovering around 20F, which is pretty cold by Virginia standards.

Consequently, I had the great luck of having one of America’s most popular tourist attractions virtually to myself.

Only three other guys were on the “Behind the Scenes” tour of the mansion. 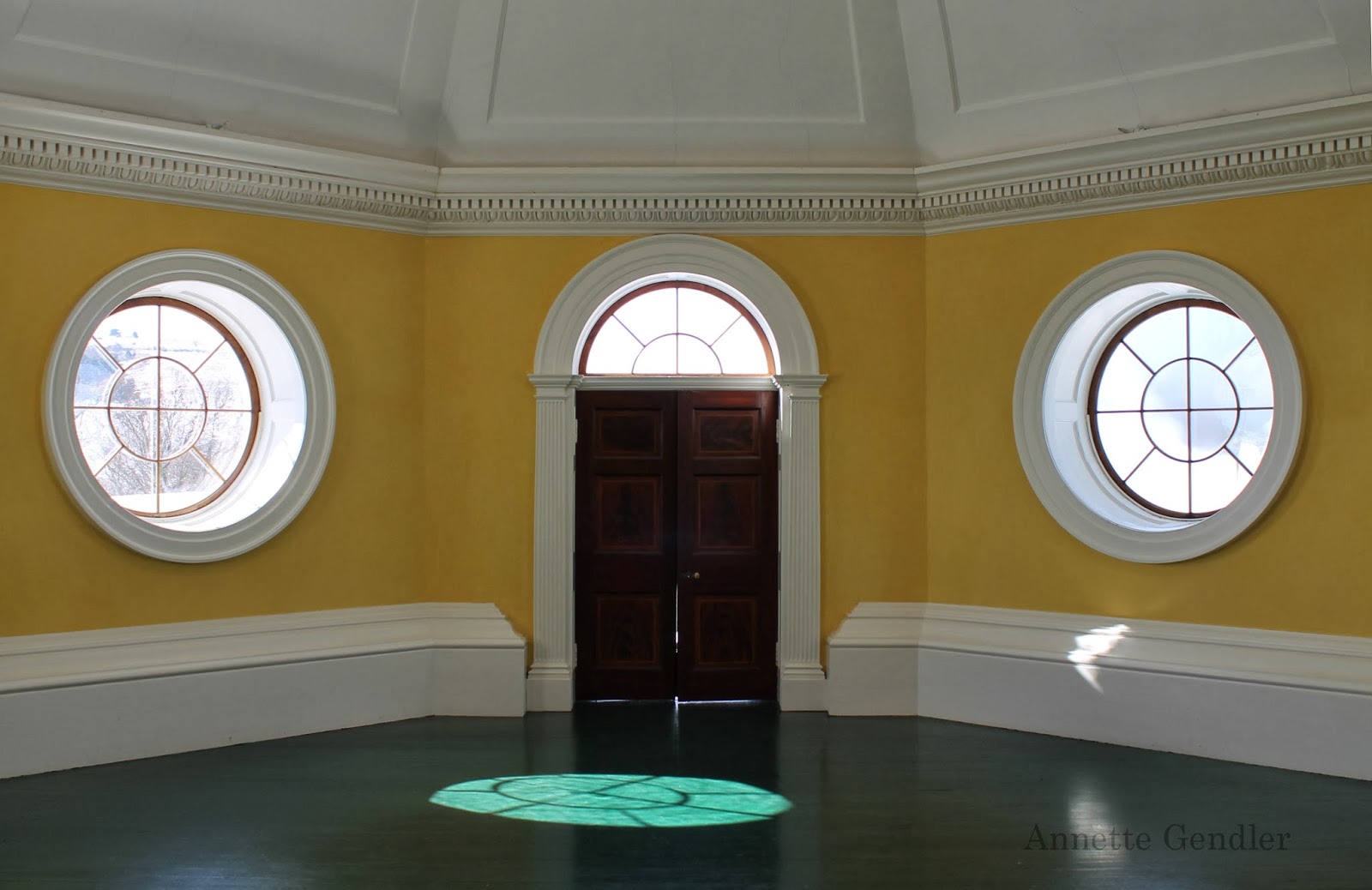 The Dome Room at Monticello

I didn’t fall in love with the house itself.

It struck me as the original McMansion – lots of wasted space and impracticalities, such as this Dome Room (this was the only inside shot I was allowed to take).

The Dome Room served no purpose. Jefferson simply wanted to construct a dome room because he had liked those he had seen in Europe. The door in the middle of this photo is purely for symmetry; it leads nowhere. Behind it is an attic room whose floor lies three feet lower; Jefferson’s granddaughters used to love to hide there from household duties and read. Like the other rooms on the third floor, the Dome Room is unheated. We were in our winter coats touring it. In the summer it gets stifling hot. the room is only reached by two flights of cramped stairs, so Jefferson hardly took visitors up there to show it off.

Another baffling impracticality from an otherwise seemingly practical man: the house has no grand stair case.

In Jefferson’s opinion, they were a waste of space. Rather, the stairs in both wings of the house are no wider than my not-so-wide hips. They wind up in a U, and the steps are nine inches high. Not fun to navigate, especially if you were an elderly person, like Jefferson’s sister, whose room was on the second floor. Mind you, his bedroom and study were on the first floor.

The first floor, especially Jefferson’s personal quarters, seemed more comfortable than the upstairs and featured clever conveniences such as his own personal privy (basically an indoor outhouse with a skylight). His Cabinet room, i.e. his study, still displays his polygraph, a early version of a copy machine, by which he was able to make a duplicate of whatever he was writing. I loved the ingenuity of that “double pen” device. The above is a scanned postcard of the Cabinet room as photos weren’t allowed. 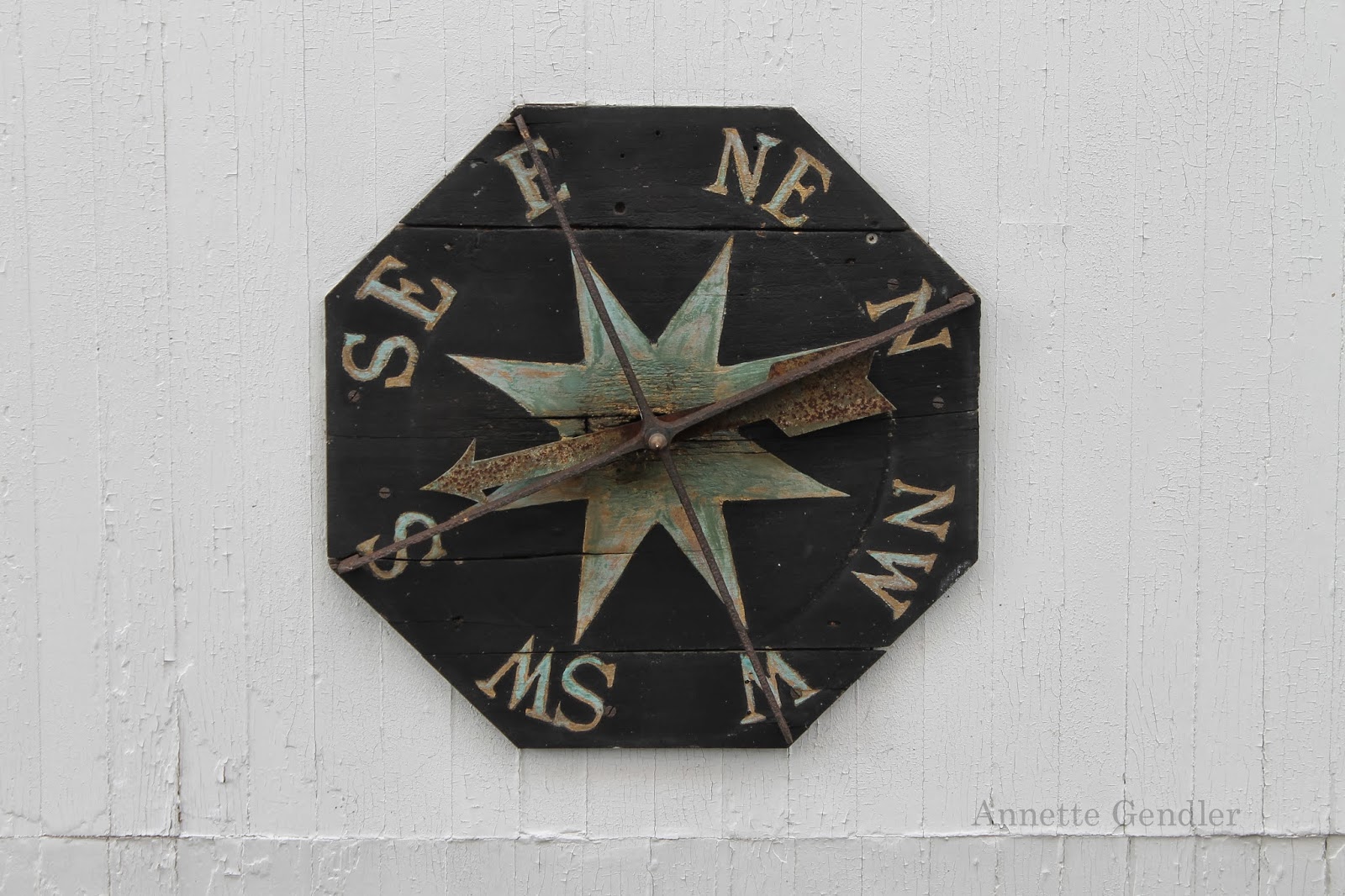 Jefferson loved gadgets. This compass is connected to the weather vane on the roof and mounted under the Northeast portico so that family members could determine the direction of the wind without stepping outside. 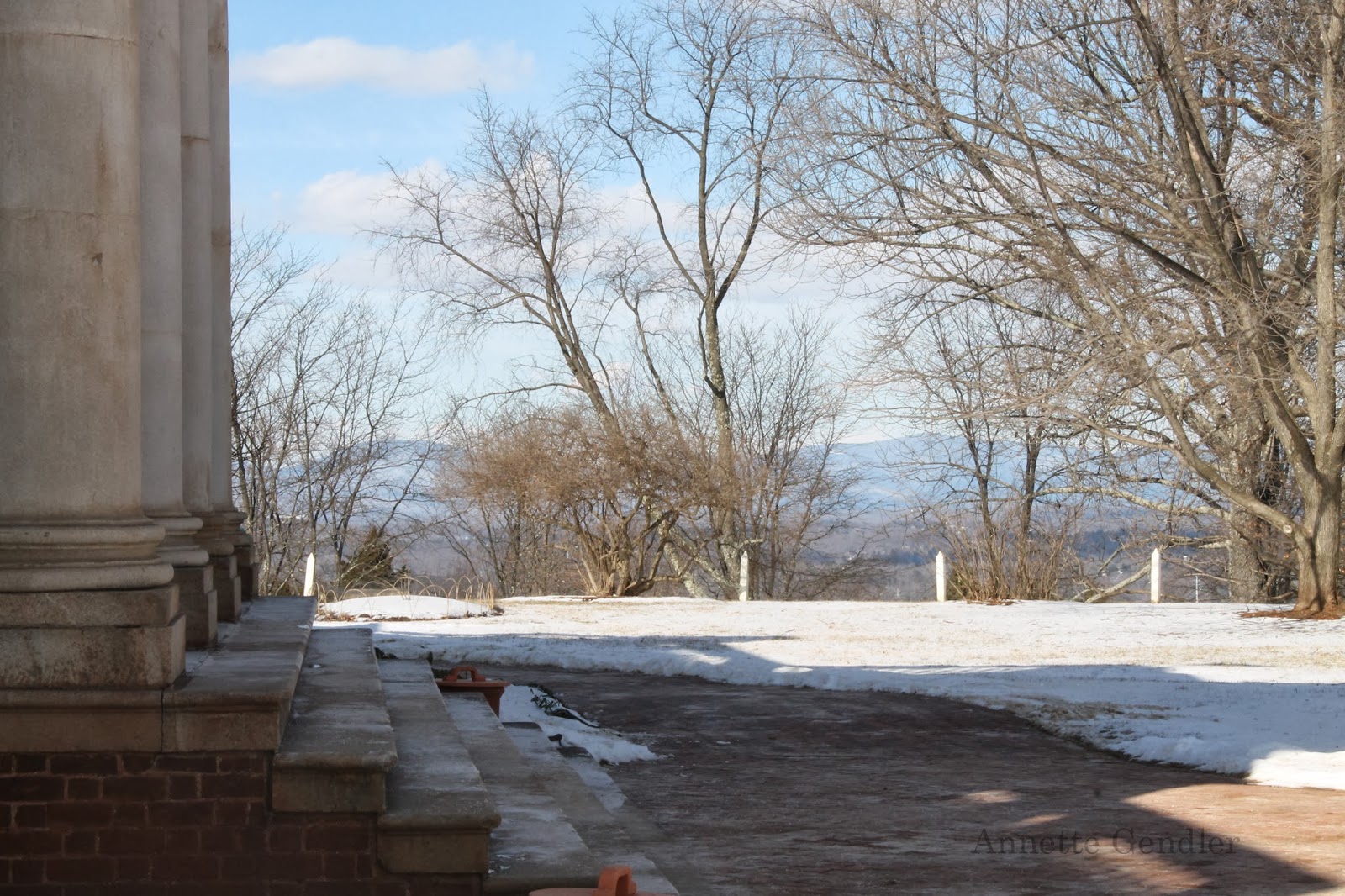 The outside, despite the cold, charmed me at Monticello. I had the grounds all to myself, covered in the silence of snow. Here the view of the Blue Ridge Mountains from the Northeast portico. 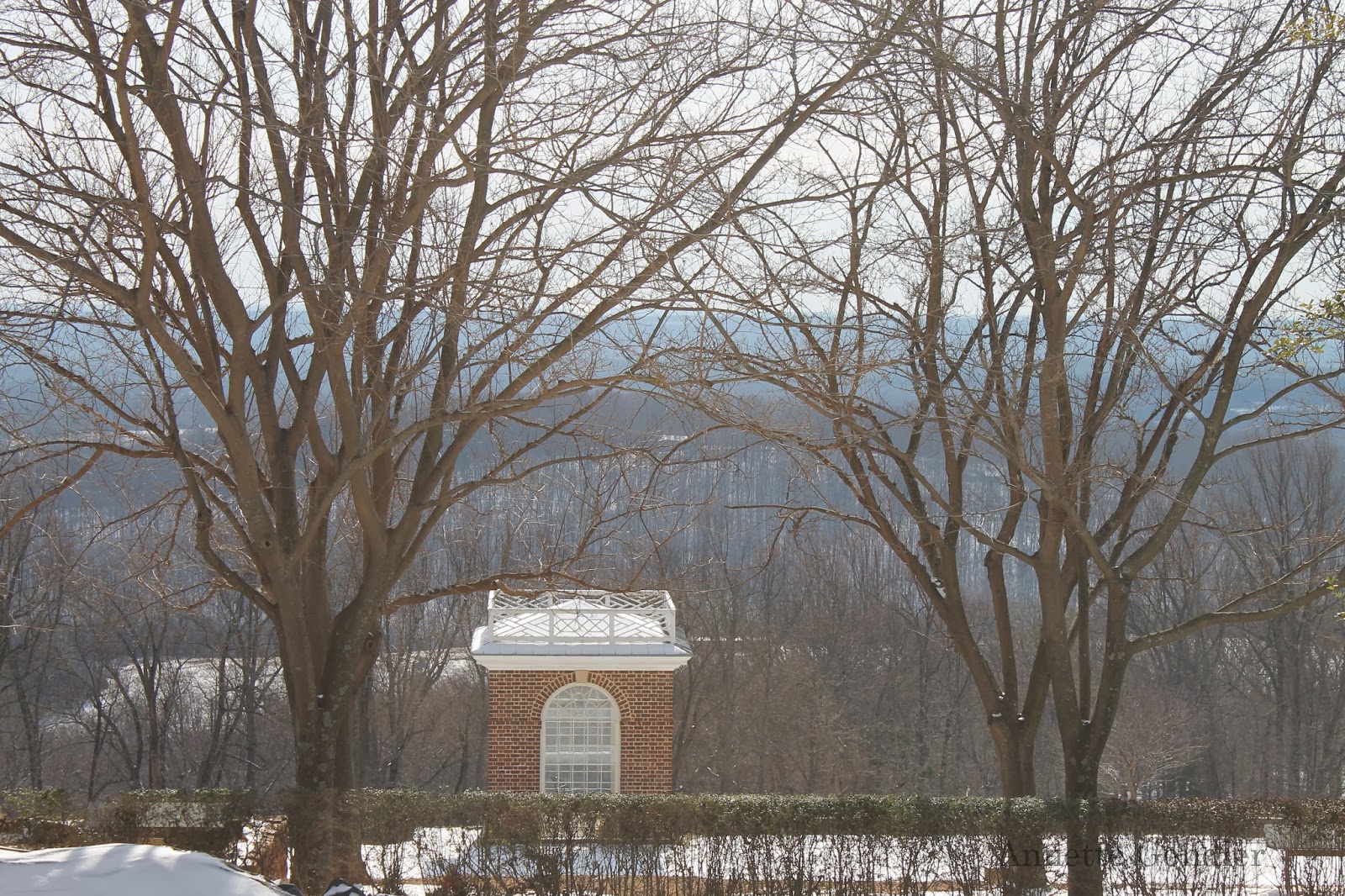 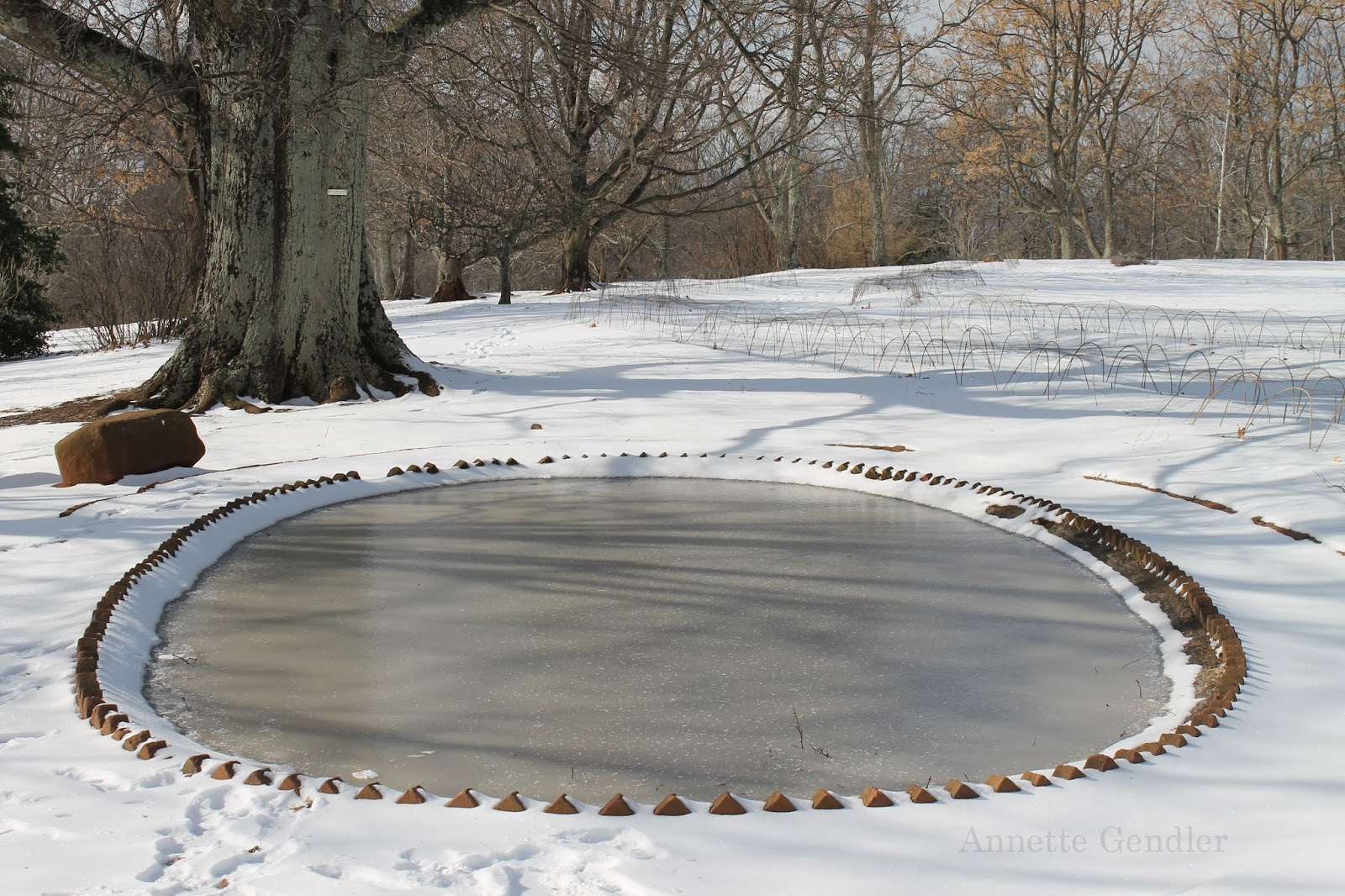 The silence of the fish pond by the kitchen quarters 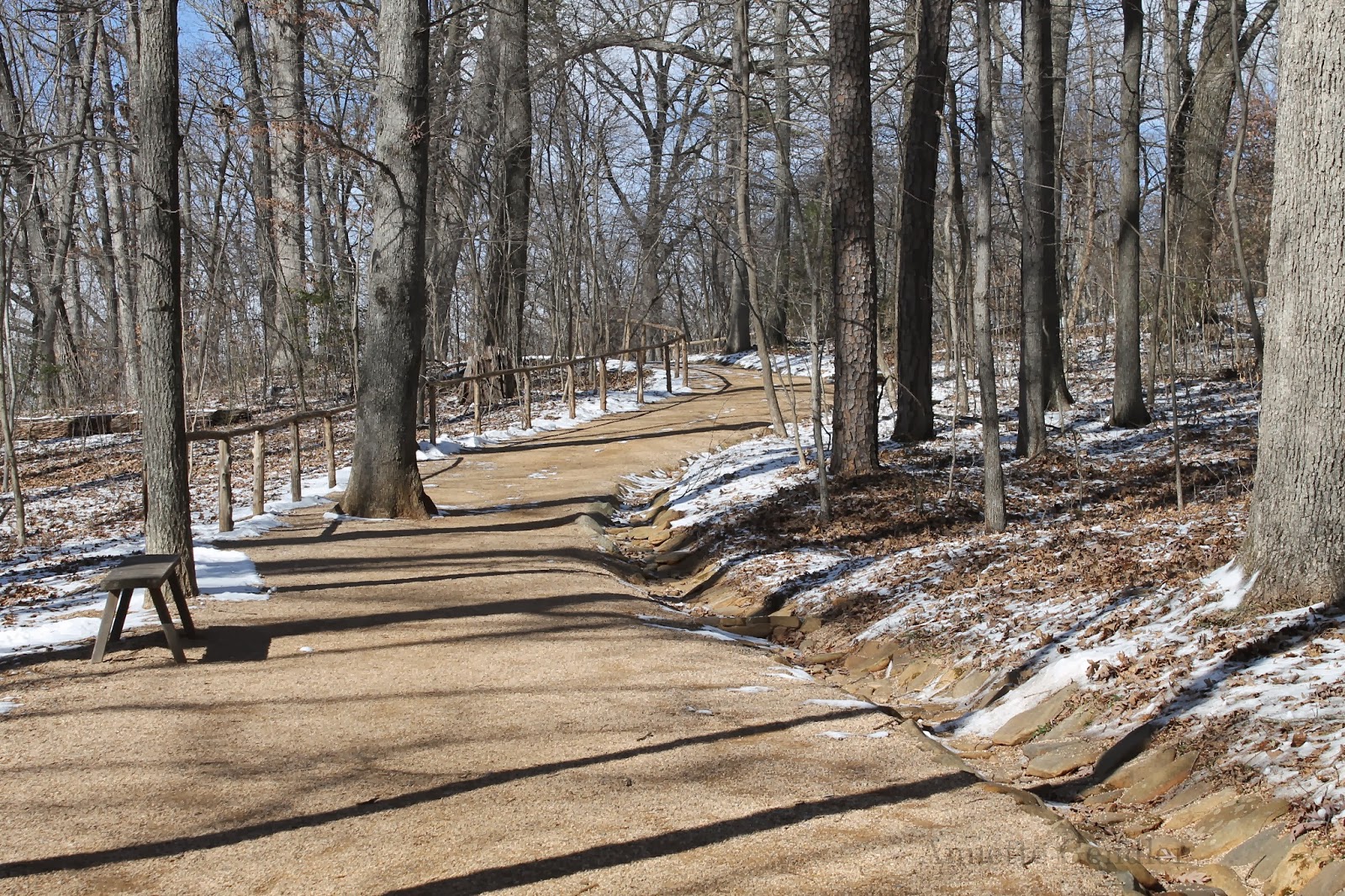 And then the ultimate silence, namely that of a graveyard, as I wandered down the trail that was supposedly closed due to wintry conditions. But, lured by the prospect of sun, snow and solitude, I kept on walking and happened upon the Jefferson Family Cemetery, silent behind the glory of this wrought iron gate. 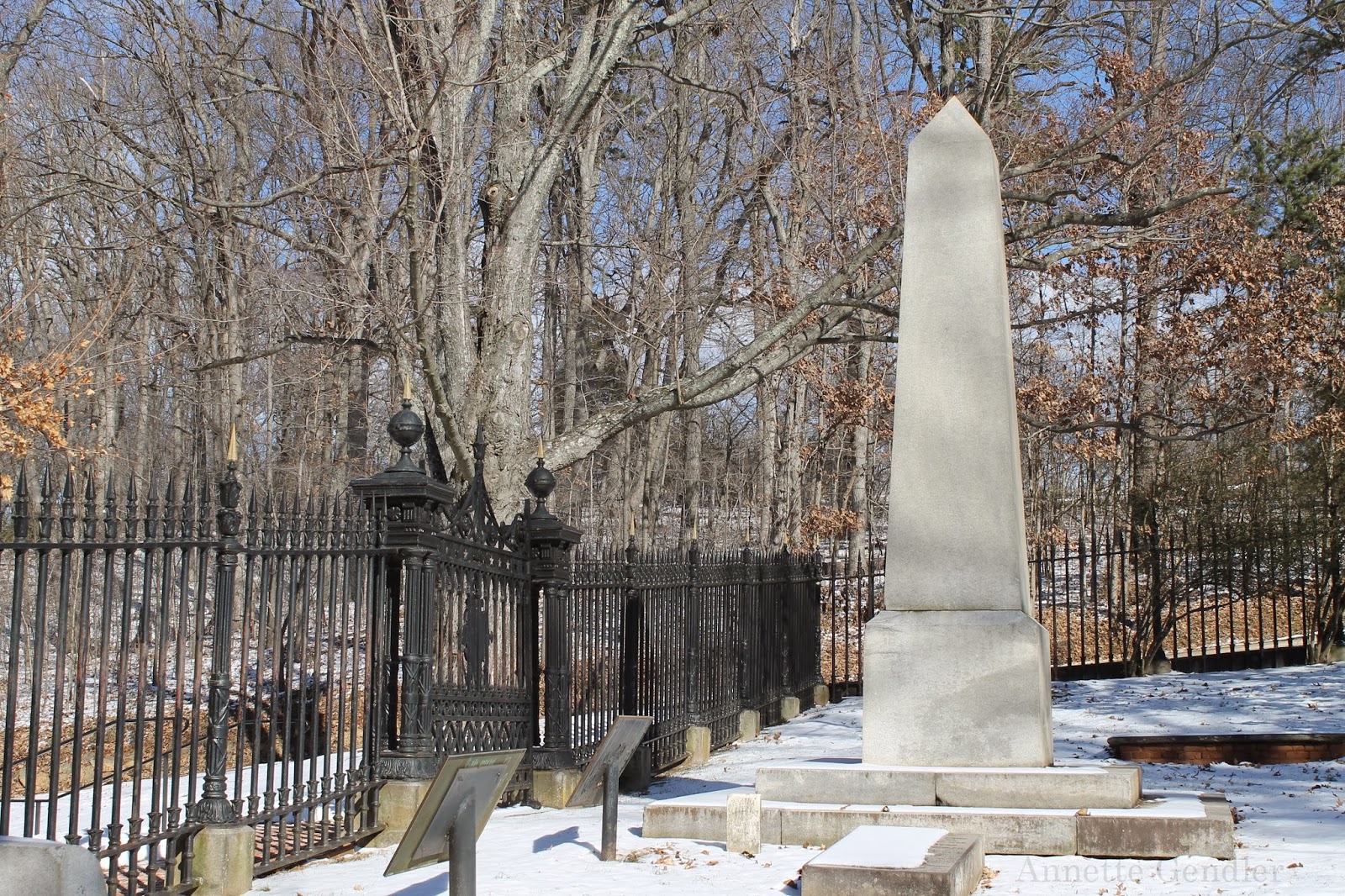 Jefferson’s gravestone is this plain obelisk. 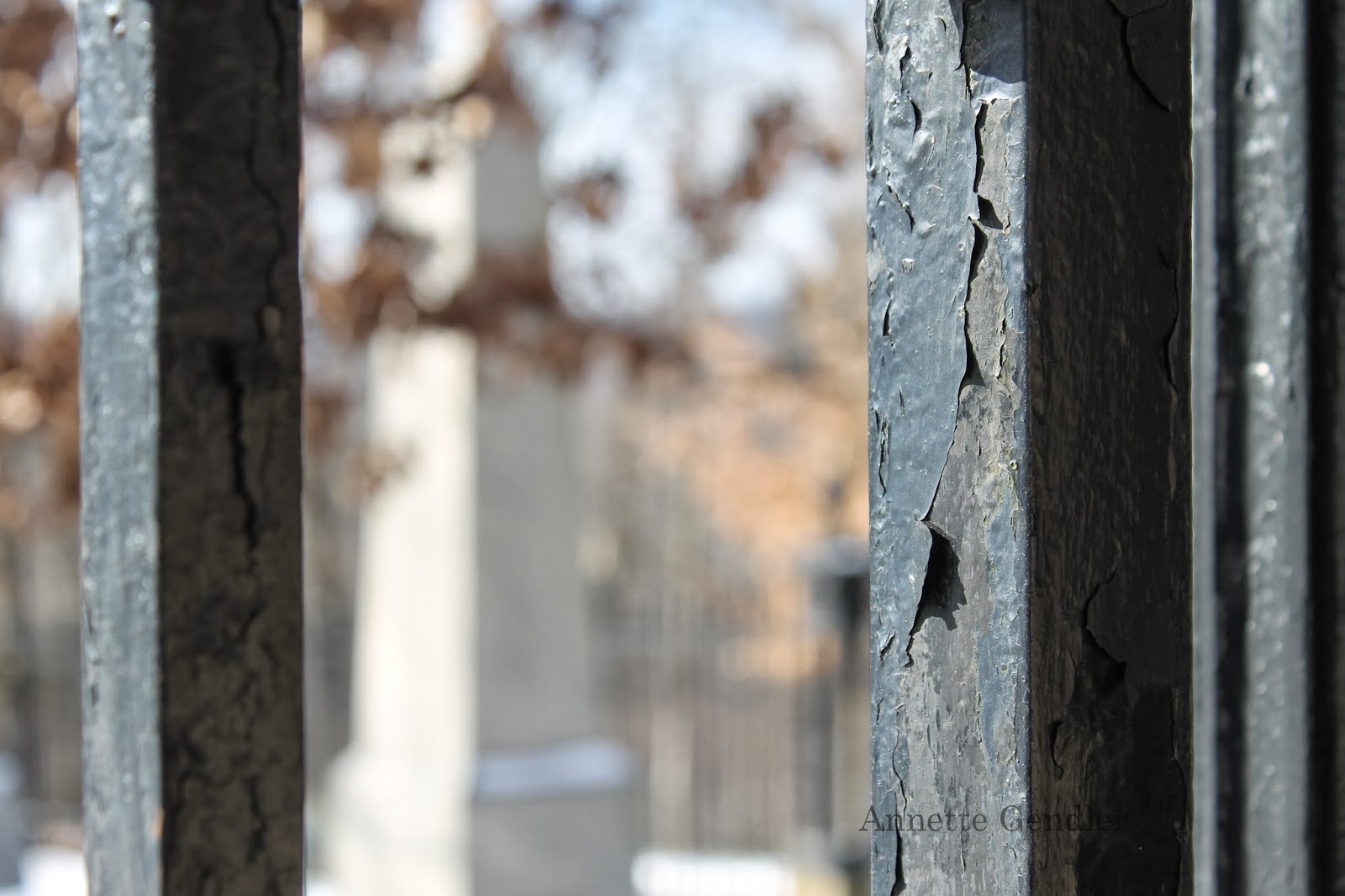 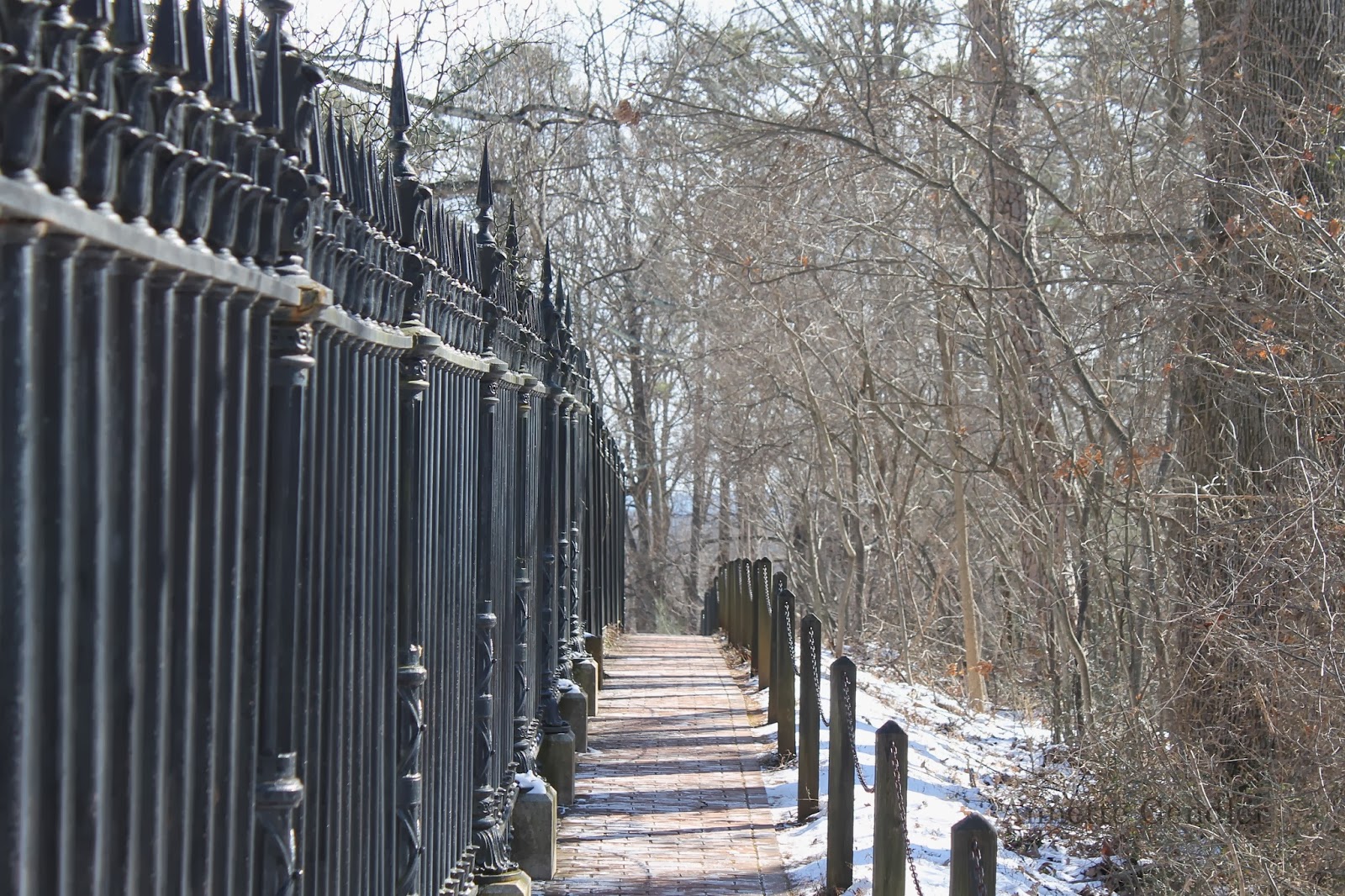 Onward, along the cemetery’s fence, along the empty path. Not a soul to be seen. 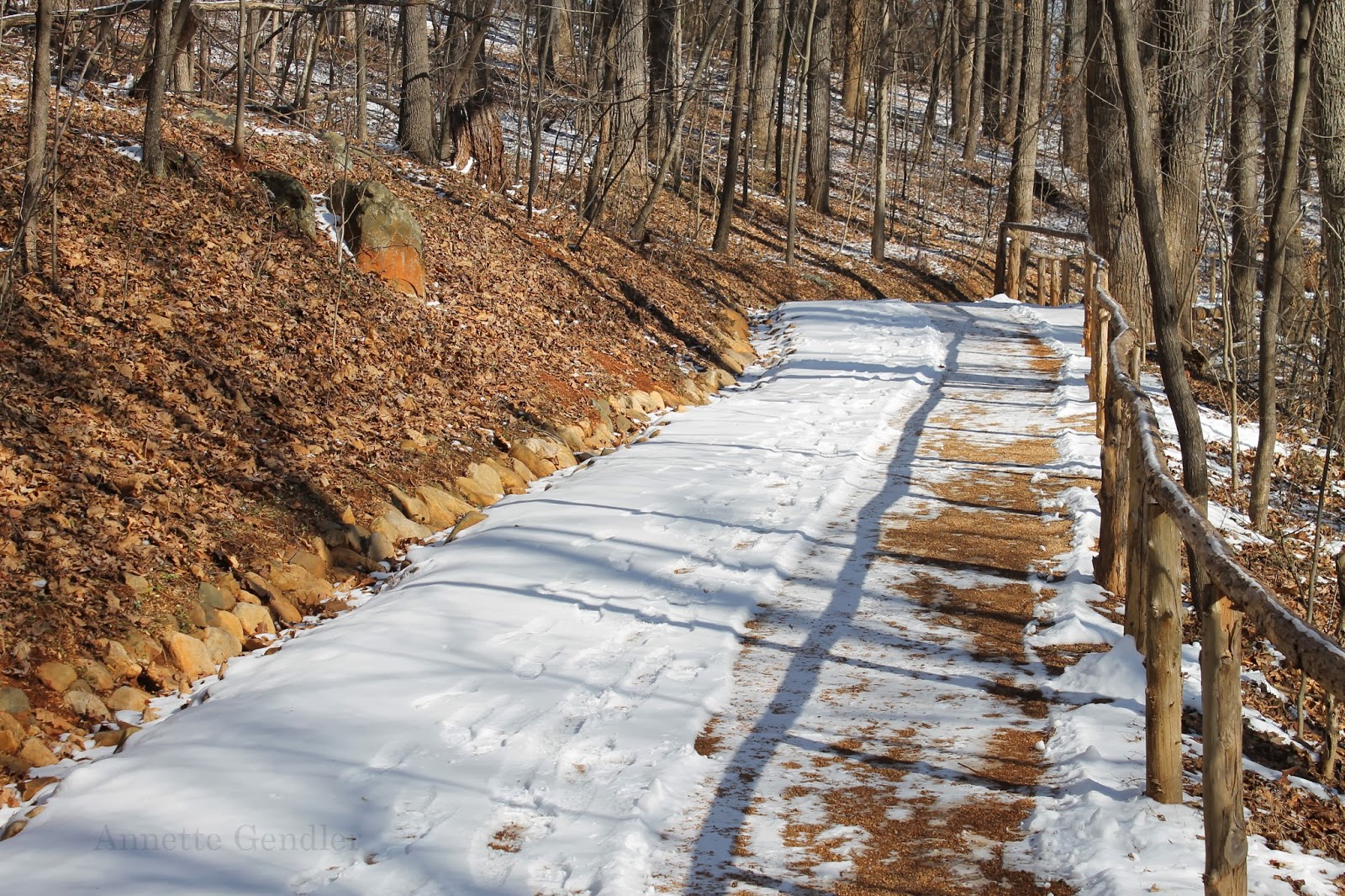 The trail was perfectly walkable. It was just cold that day, but that’s where long underwear comes in… 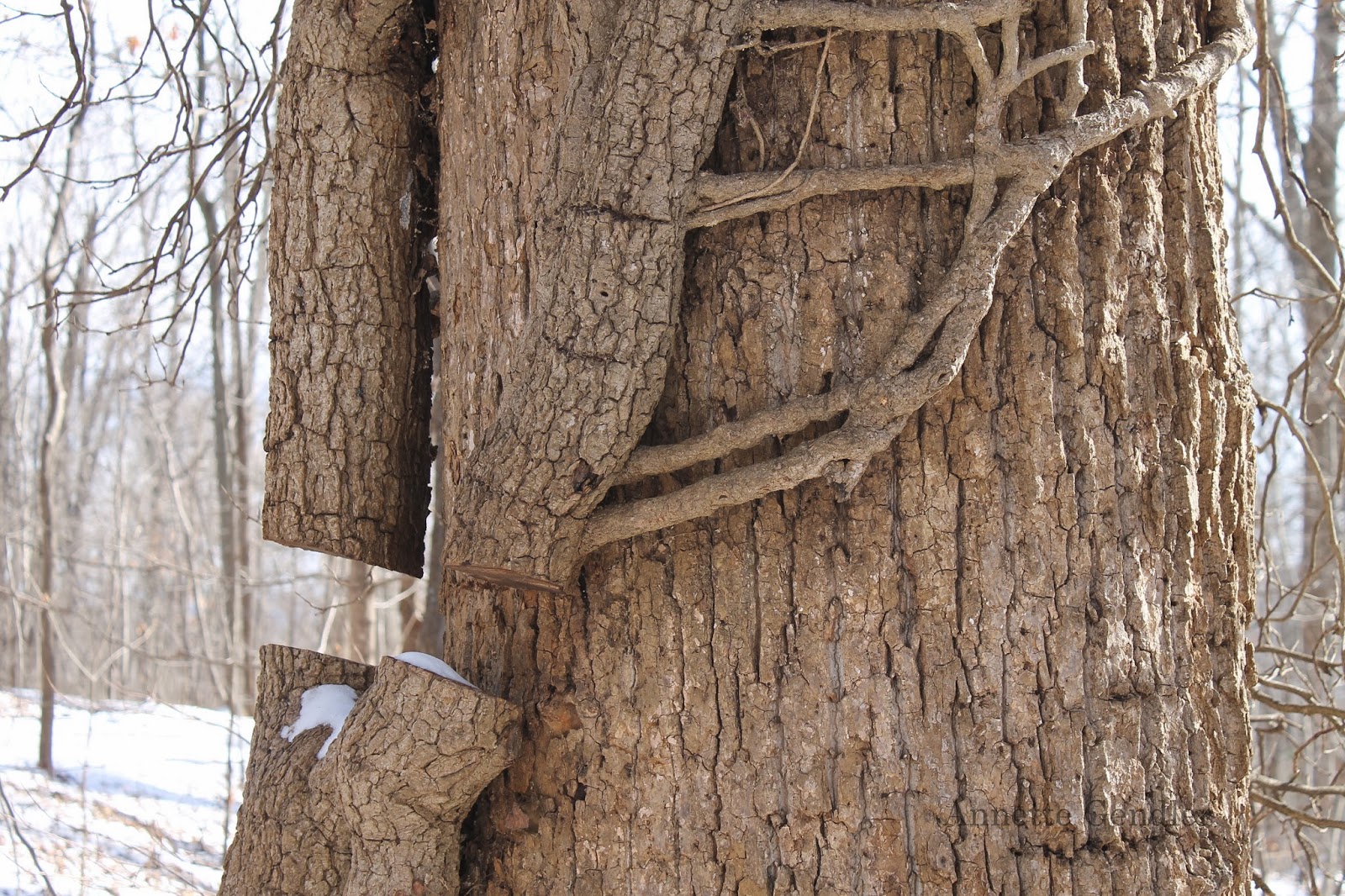 Surely this is a metaphor for something? 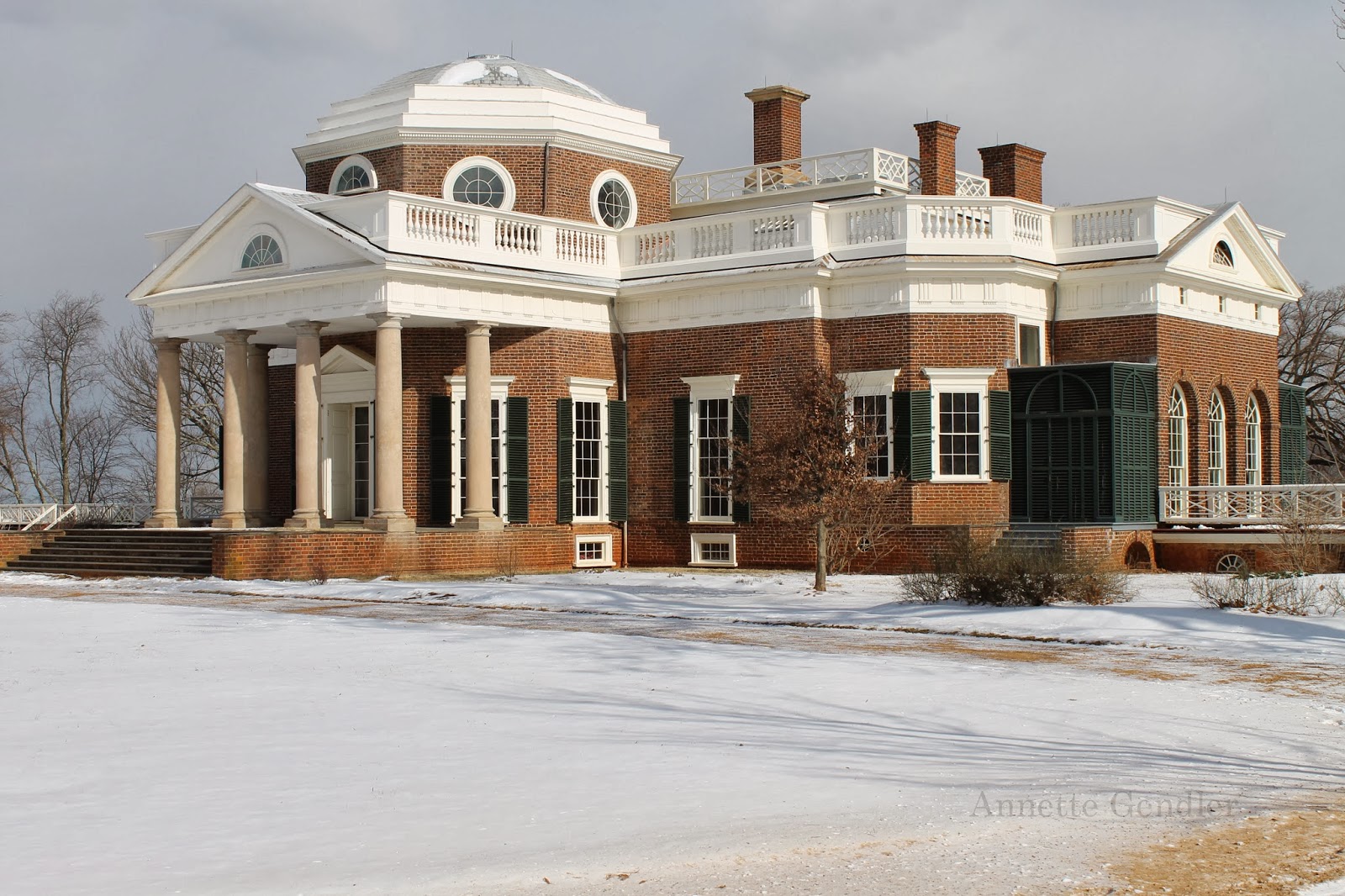 During Jefferson’s time Monticello was a large household bustling with visitors, relatives, and slaves. Now it is usually a busy tourist attraction. In my memory, however, Monticello is a slightly quirky mansion on a mountain top, solitary in the beauty of the wintry Blue Ridge Mountains.