When I visited my grandparents’ hometown Liberec (Reichenberg) in the Czech Republic in 2009 on a research trip for Jumping Over Shadows, I spent a long time wandering their old neighborhood, looking for the building that could have been the Sanatorium Brey. This institution figured prominently in our family’s history: my father was born there, so was his brother Klaus. as were their cousins Herta and Ludwig. My Jewish great-uncle Guido (Herta and Ludwig’s dad) died there. A pivotal chapter in Jumping Over Shadows is titled “Sanatorium Brey.” 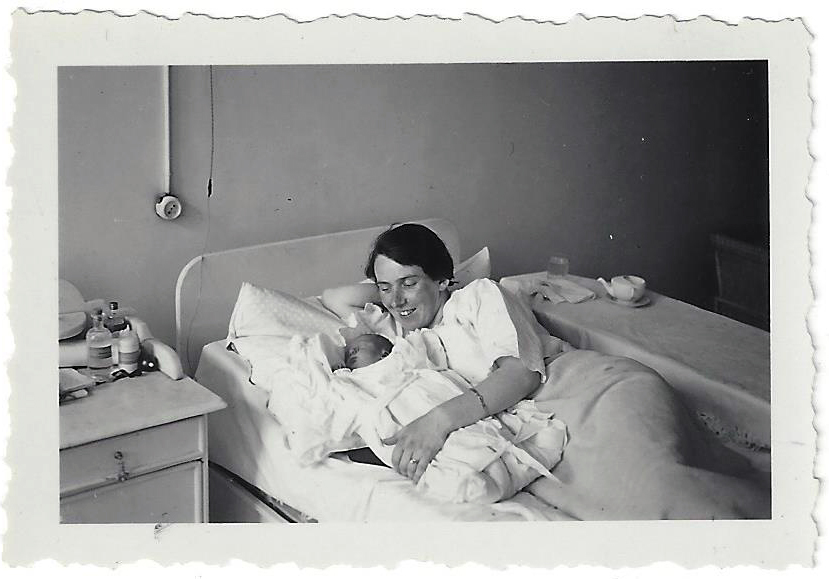 My grandmother Hanne with her second son Klaus after his birth at the Sanatorium Brey in Reichenberg (now called Liberec) in the Czech Republic, July 8, 1936

My grandmother continued to visit Guido at the sanatorium, even when it became the Gestapo’s headquarters after the Nazis took over the Sudetenland in 1938, following the infamous Munich Agreement. As always, life is stranger than fiction: My Jewish great-uncle Guido was wasting away from diabetes on the sanatorium’s ground floor while the Gestapo moved in on the floors above him. My grandfather bribed the staff so Guido could stay, while my grandmother clandestinely visited him.

So, naturally, I wanted to see this building. Where, oh where, was this Sanatorium Brey? A complicating factor was that I had no idea what it looked like. None of the books I had on Reichenberg featured an image of that sanatorium, nor did any family albums. On my visit in 2009, I searched in vain. Later, looking for images to go along with Jumping Over Shadows, and in particular the chapter titled “Sanatorium Brey,” I scoured the Internet, but a likeness of the sanatorium was not forthcoming.

The mystery of that building kept bugging me, and so I sporadically searched the Internet. Last year (oh joy!) I finally found this postcard of the Sanatorium Brey, pictured above, on the German ebay site. It’s from 1930, and the writer indicates the window of his room with an arrow (second row of windows below the roof, first on the left). He must have been there for some kind of treatment.

I am herewith happy to finally be able to share an image of one of the prime locations on Jumping Over Shadows: The Sanatorium Brey! I encourage all of you who might be on a similar quest to find a location of the past or an image of it: Keep looking! And don’t forget to search on ebay, particularly country-specific sites (if those exist).