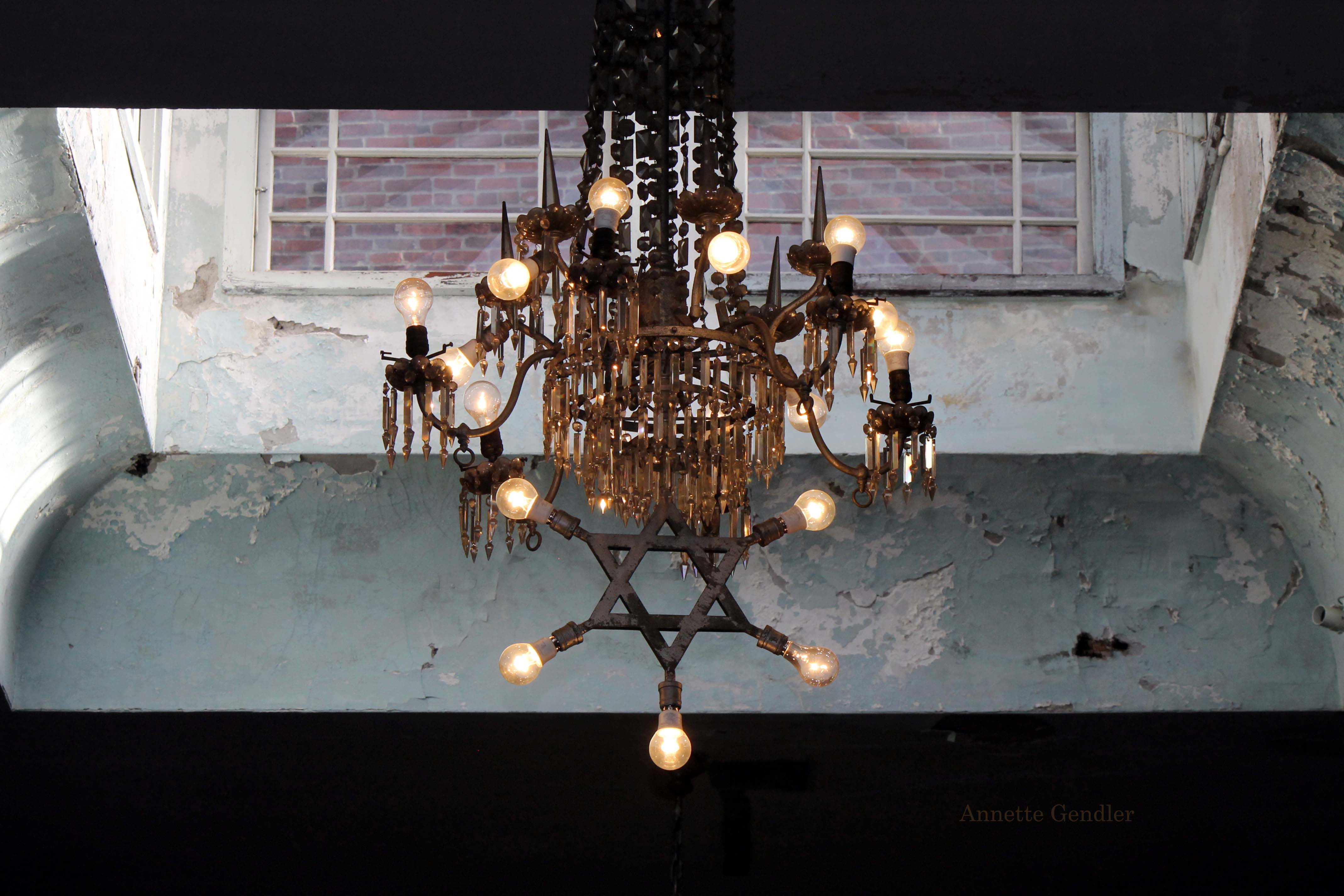 Rosh Hashana, the Jewish New Year, is around the corner, and so I thought this is a good time to share a few photos from my visit to the Vilna Shul in Boston back in April.

I’ve milled about Boston’s historic Beacon Hill many times; in fact, it’s my favorite neighborhood there. And yet, I didn’t know about the Vilna Shul until my daughter’s a capella group Kol Echad performed there. As I happened to be visiting, I got to tag along. Oh, what a find! 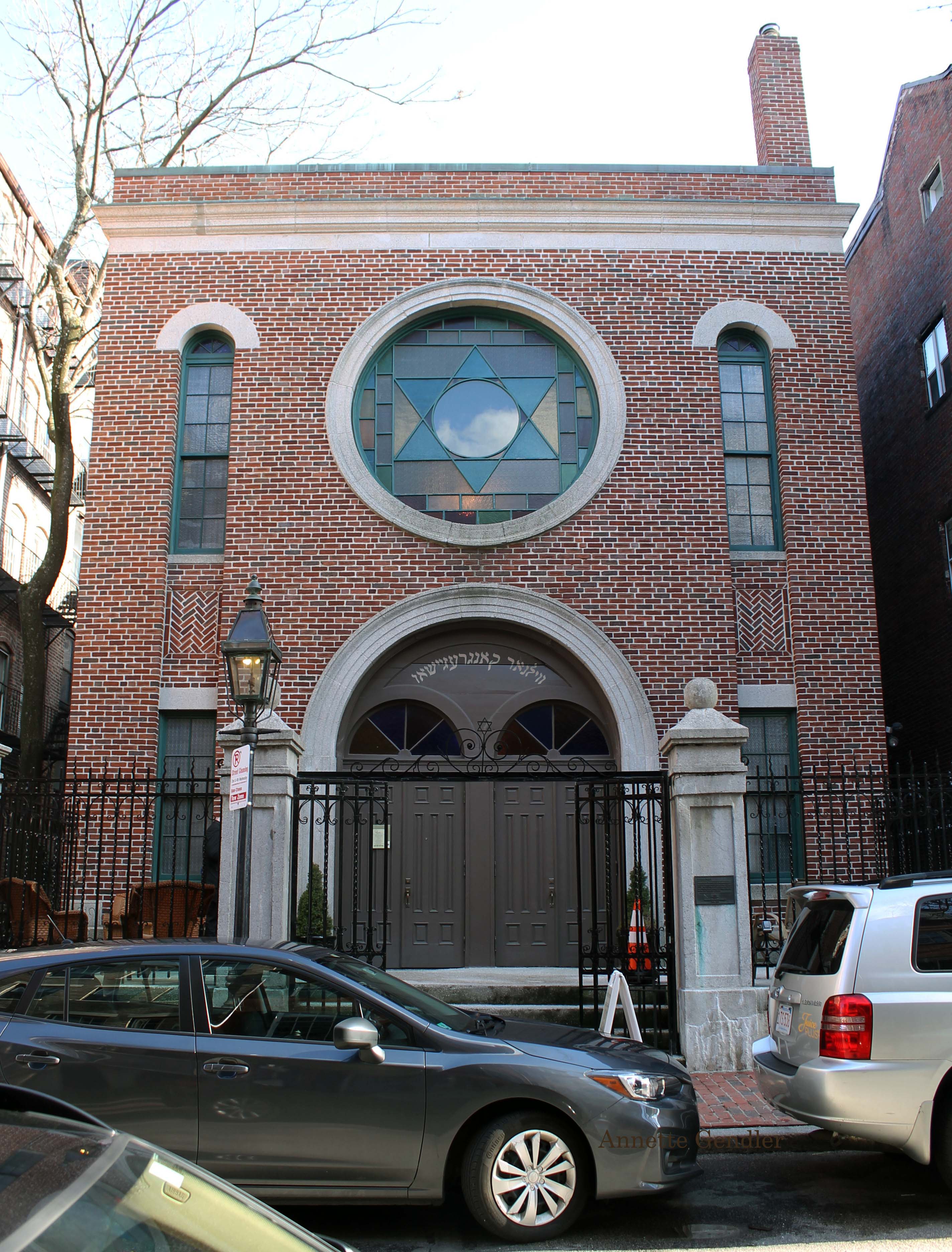 Let’s start at the beginning, i.e. the inconspicuous entrance on Phillips Street. I might have walked by if we hadn’t been looking for the synagogue. 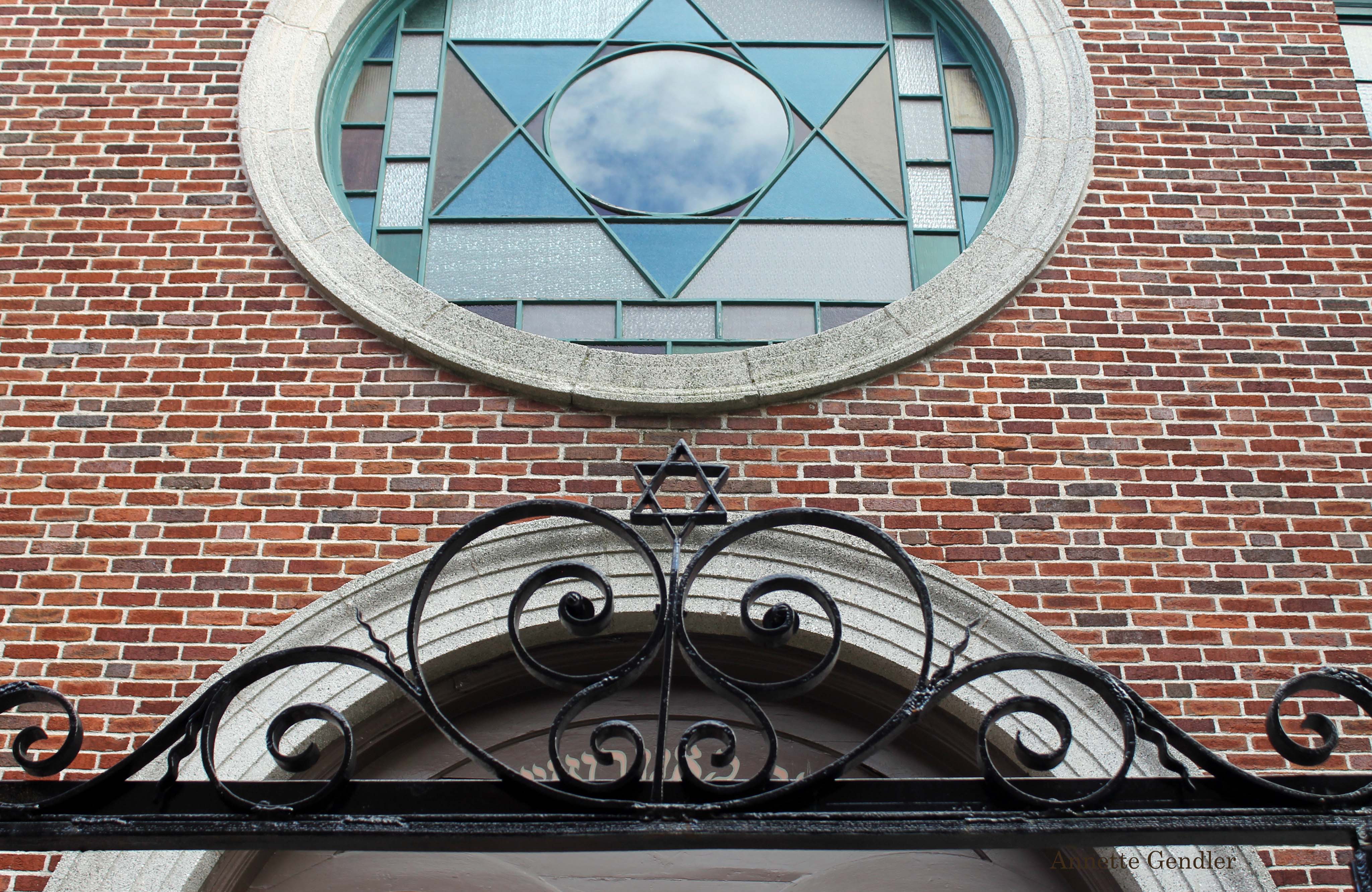 I fell in love with the Vilna Shul the minute I stepped inside and saw those windows. They’re not elaborate or showy; they’re homey. 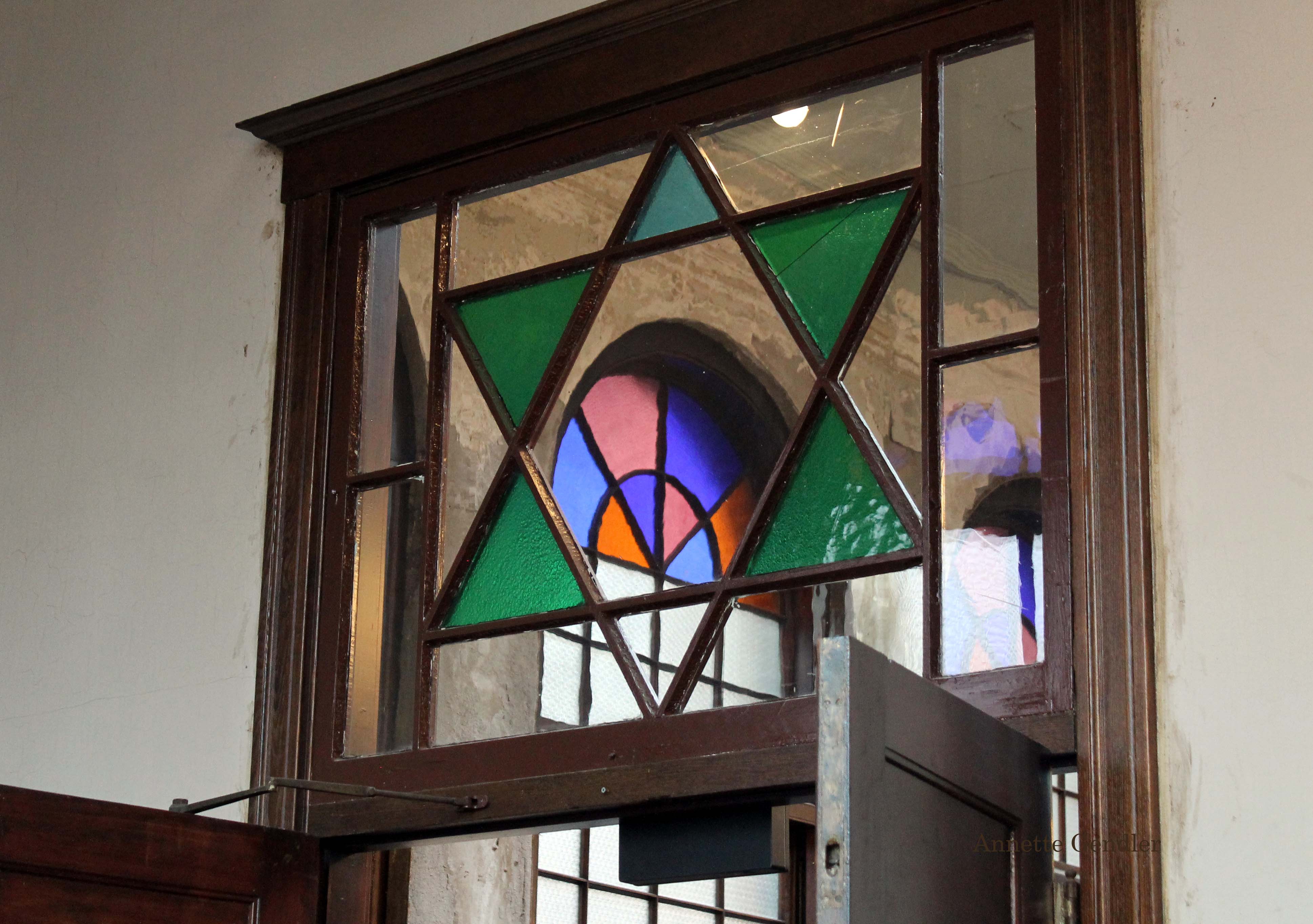 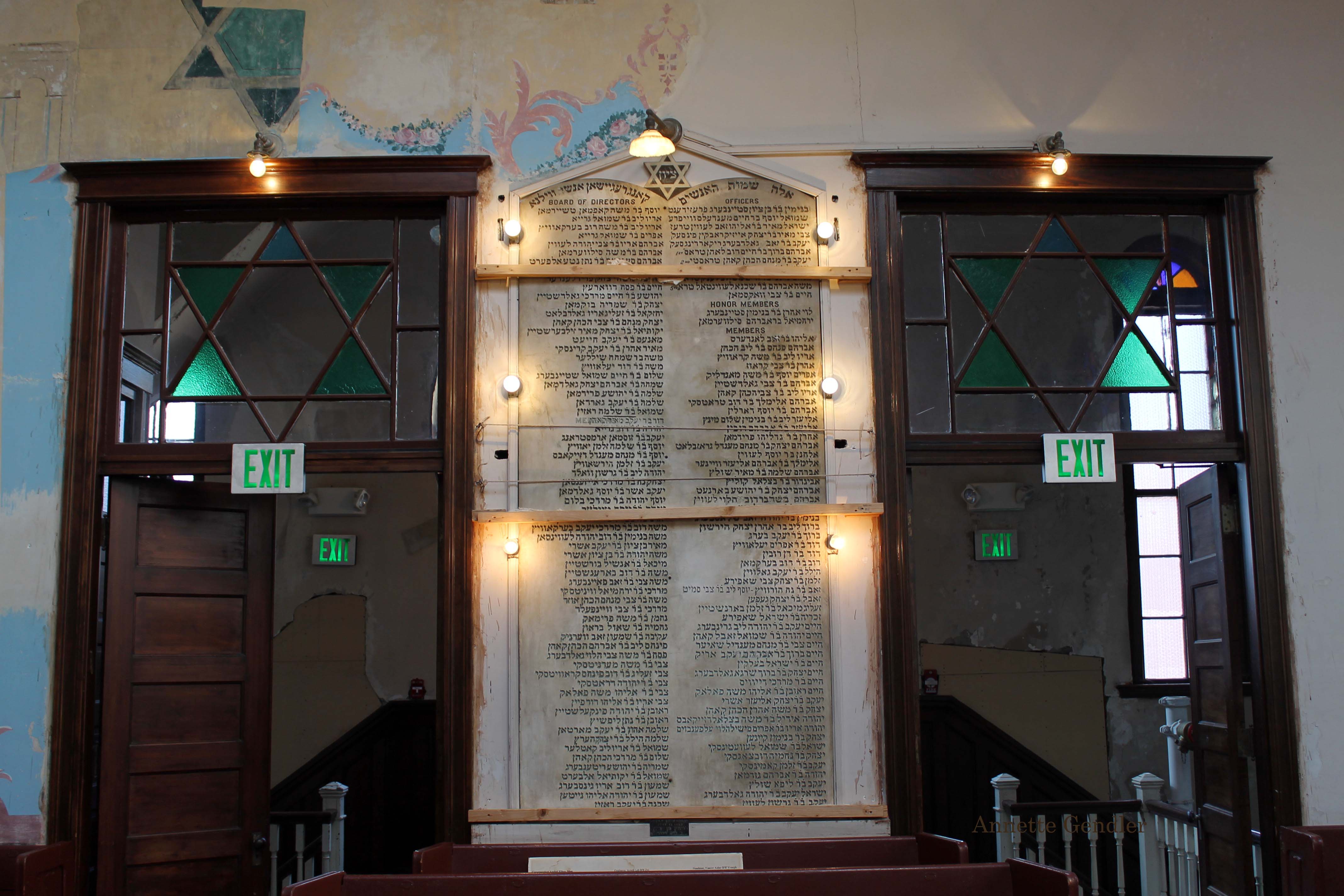 The sanctuary is actually on the second floor; you can see the railing of the stairs through its entry doors here. 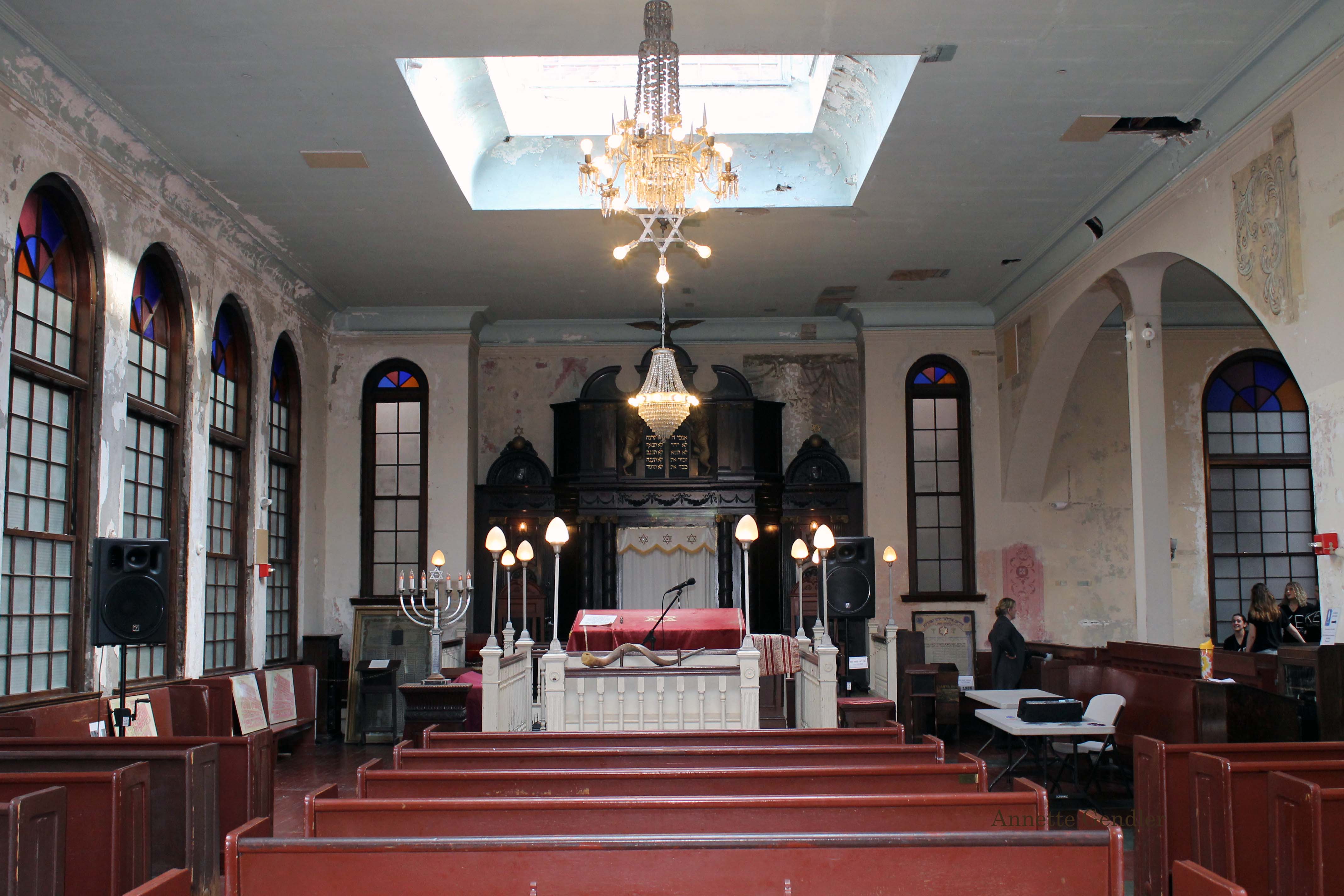 The peeling paint on the walls just added charm to the sanctuary.

However, it turns out in many spots the paint had been removed on purpose to confirm that there were murals worth saving underneath. The Vilna Shul will actually be closing this October for extensive renovations.

The synagogue is built in an L shape, and the women’s section veers off to the right of the bimah (the podium where the Torah is read during service), where you see the big open arch. I love that in the olden days the women had equal view of the proceedings like the men. (This was originally an Orthodox East European congregation where women and men sat separately.) In fact, the women actually had a better view because their section is slanted like in a theatre (nobody knows why according to the pamphlet I picked up in the vestibule). The Vilna Shul is not used as a synagogue anymore, but as a Jewish cultural center. The last Rosh Hashana service was held here in 1985. (More on the shul’s history here.) 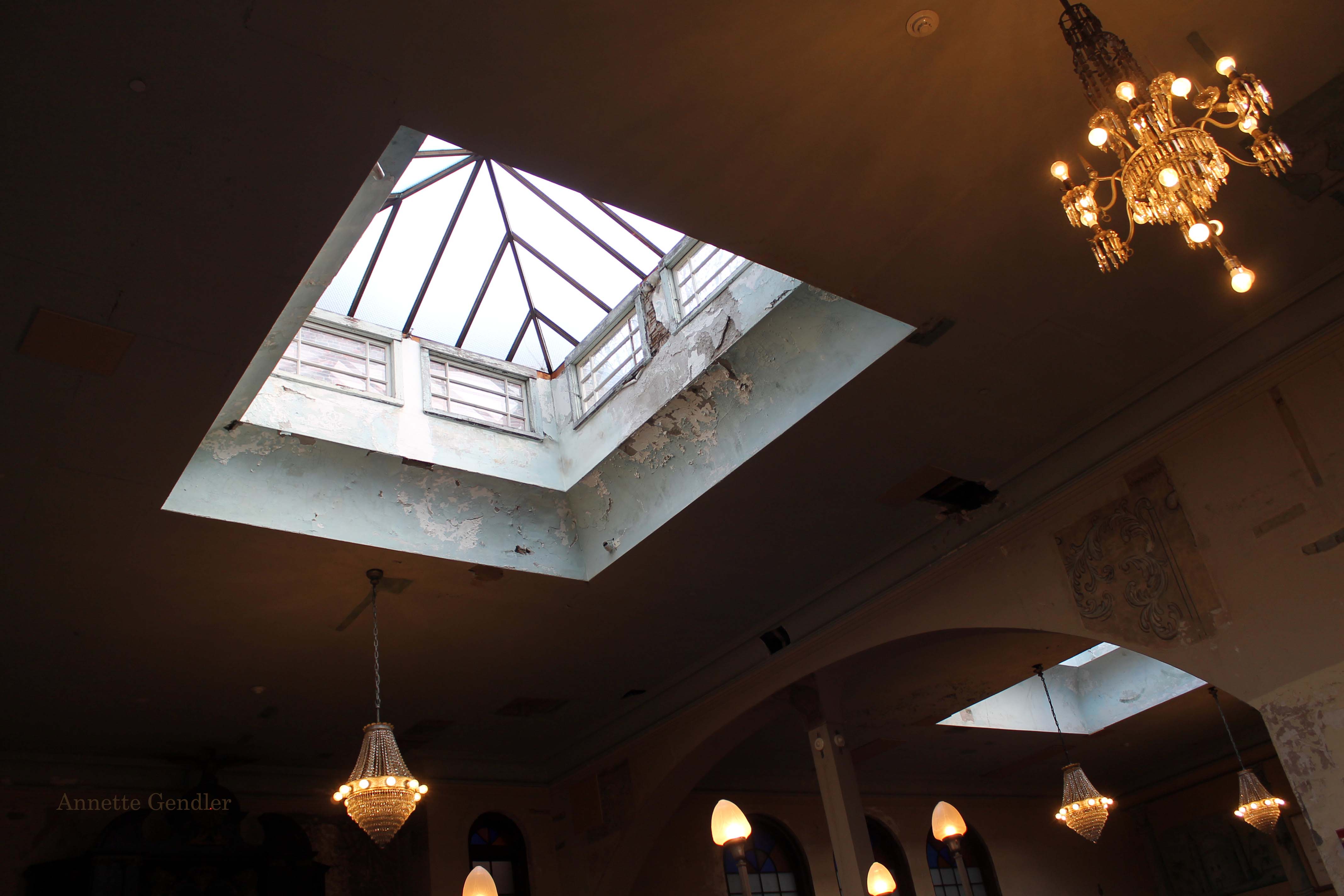 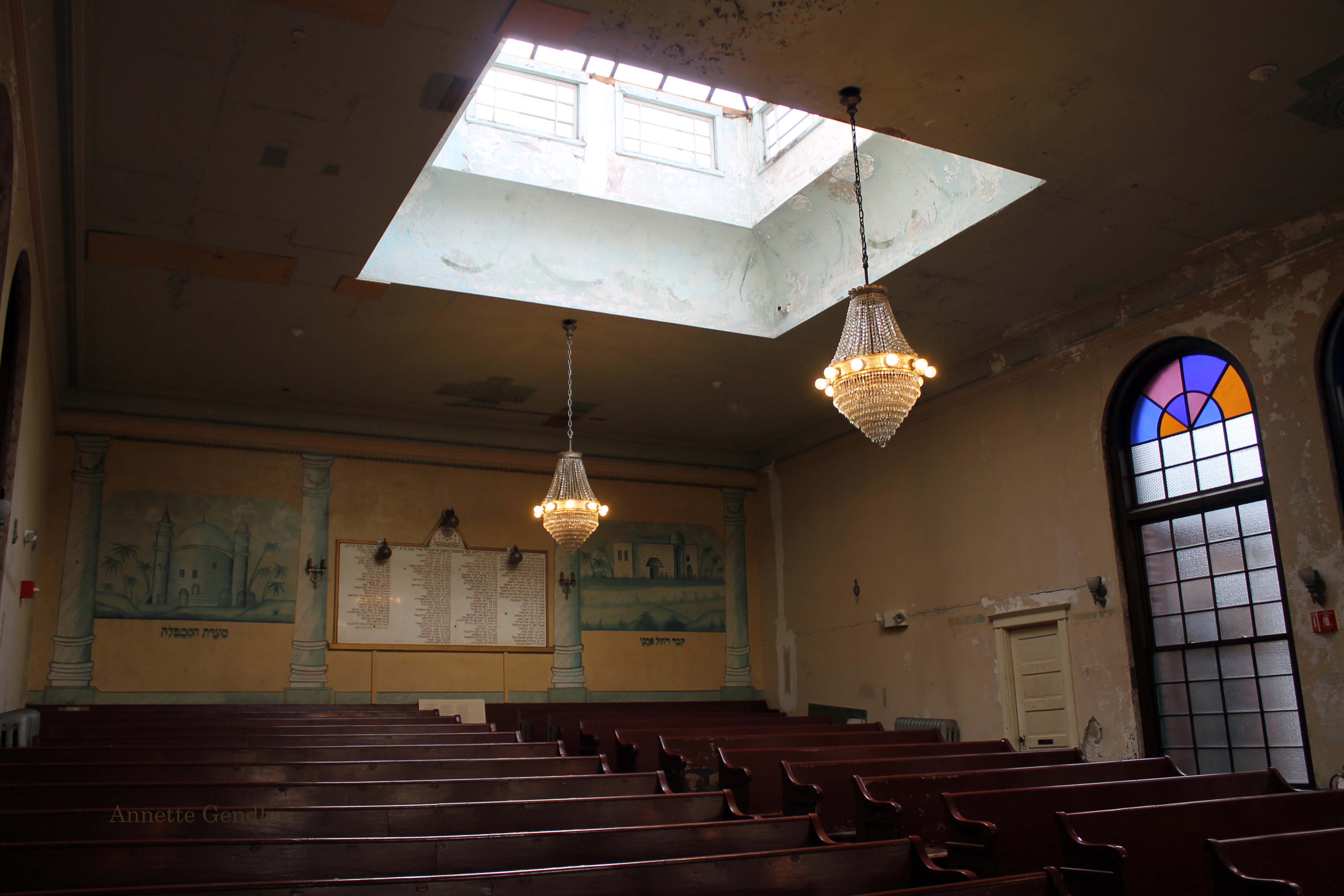 See those beautiful wall paintings in the women’s section? 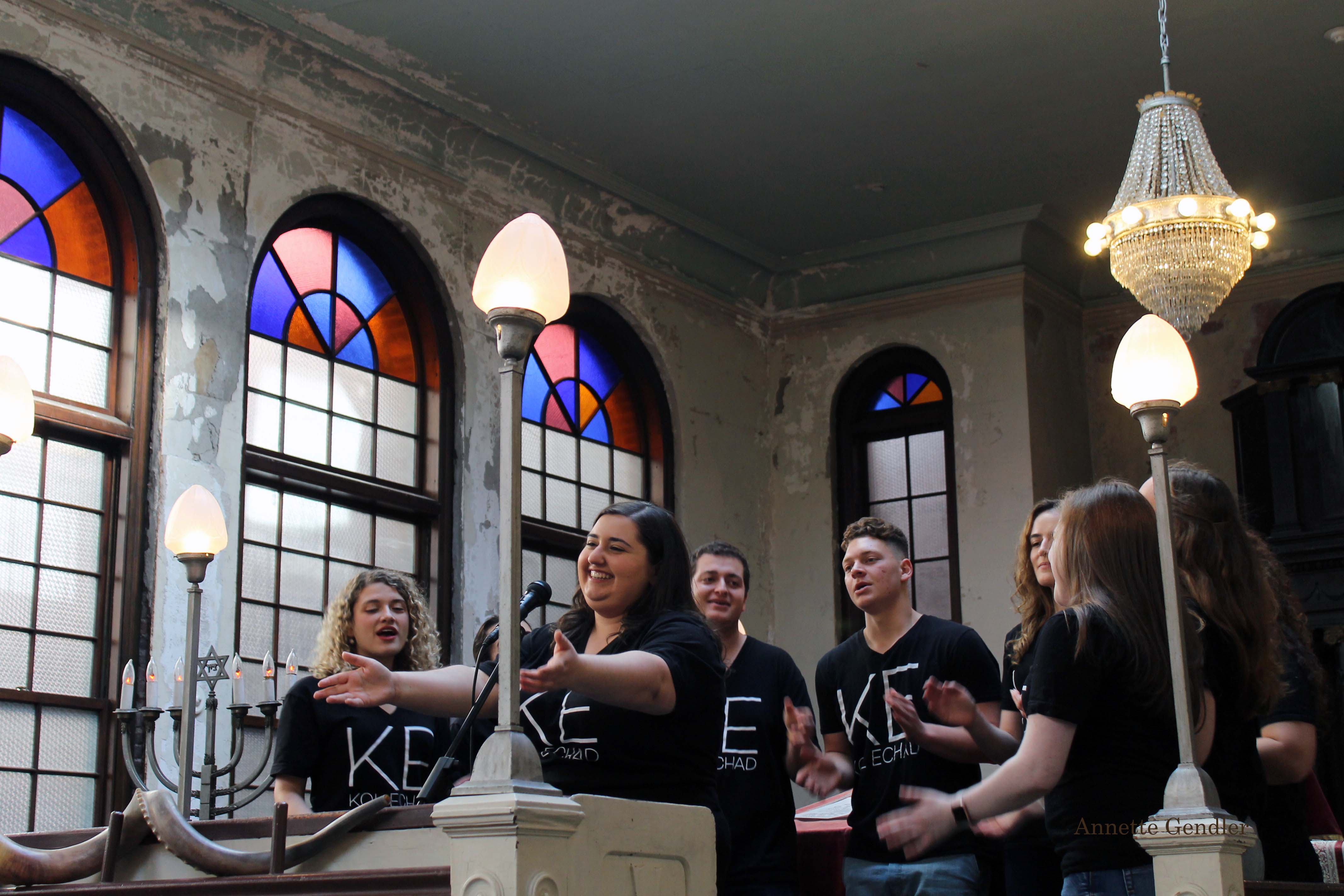 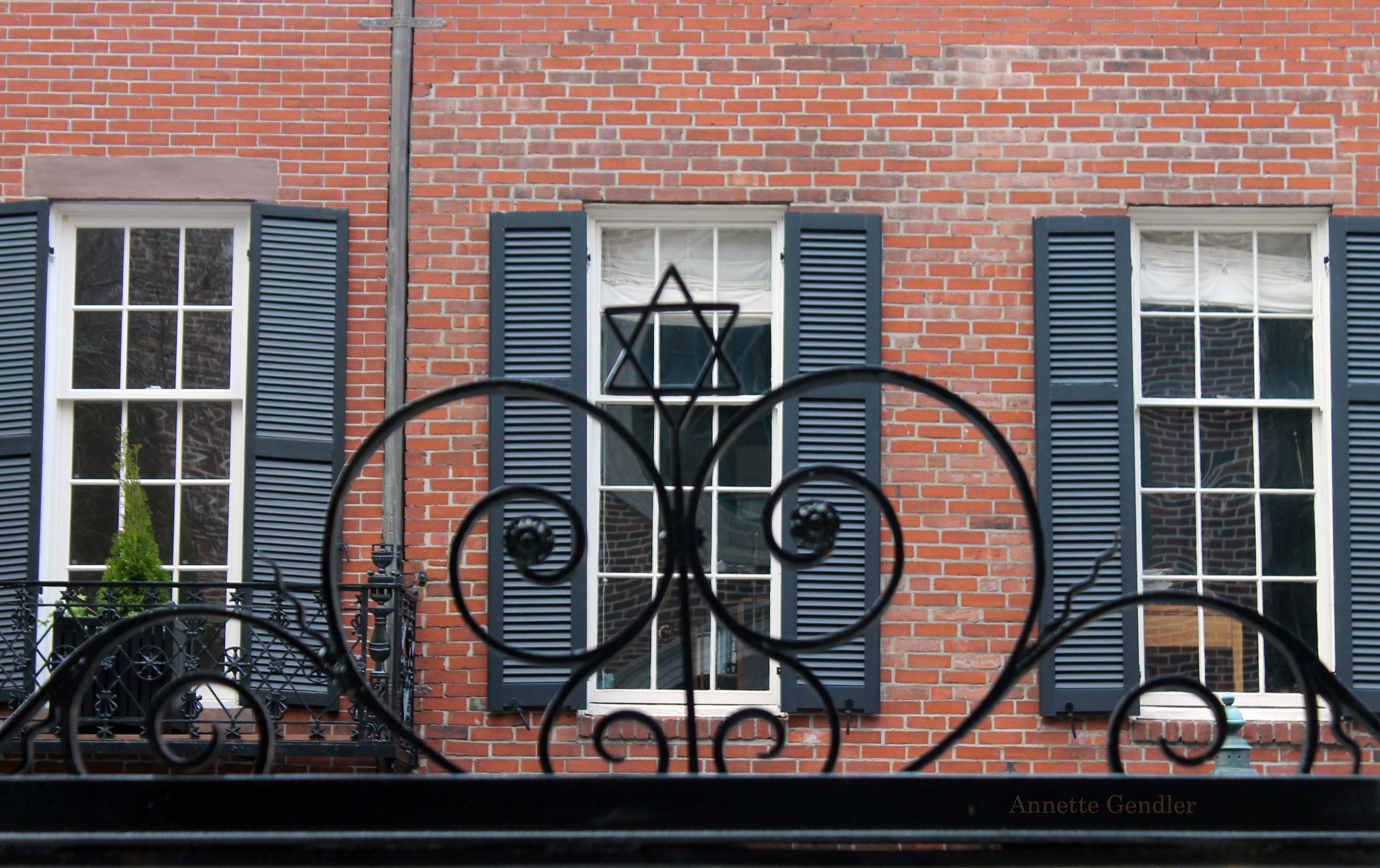 This what you see when you exit the Vilna Shul: the typical brownstone facades of Beacon Hill. 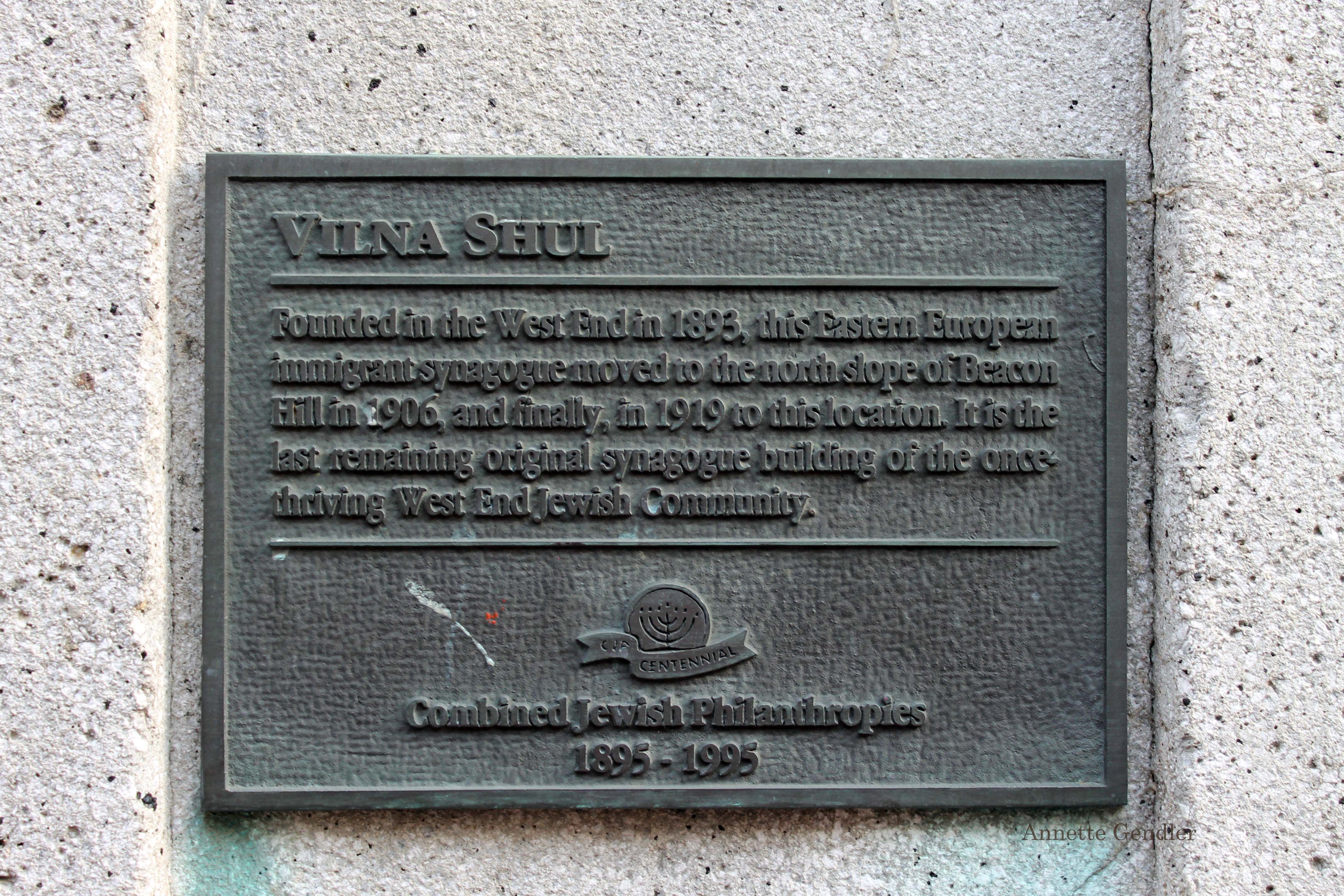 I wish the Vilna Shul all the best for the future; I’ll be sure to stop by on my next visit to Boston, maybe I’ll even get to spot the renovations going on.