Whenever I travel, I send postcards to my brother and sister.

They do the same. This summer I was grounded because of my hip surgery, but the side table by my writing spot displays postcards from my brother’s trip to Scotland and my sister’s excursion to King Ludwig’s castle Herrenchiemsee with a cousin.

The three of us live in three different countries so we could write to each other more often (and we used to) but alas, for the most part, snail mail has fallen by the wayside as a means for keeping in touch these days. WhatsApp messages and email have taken the place of handwritten missives. Except for the postcards. 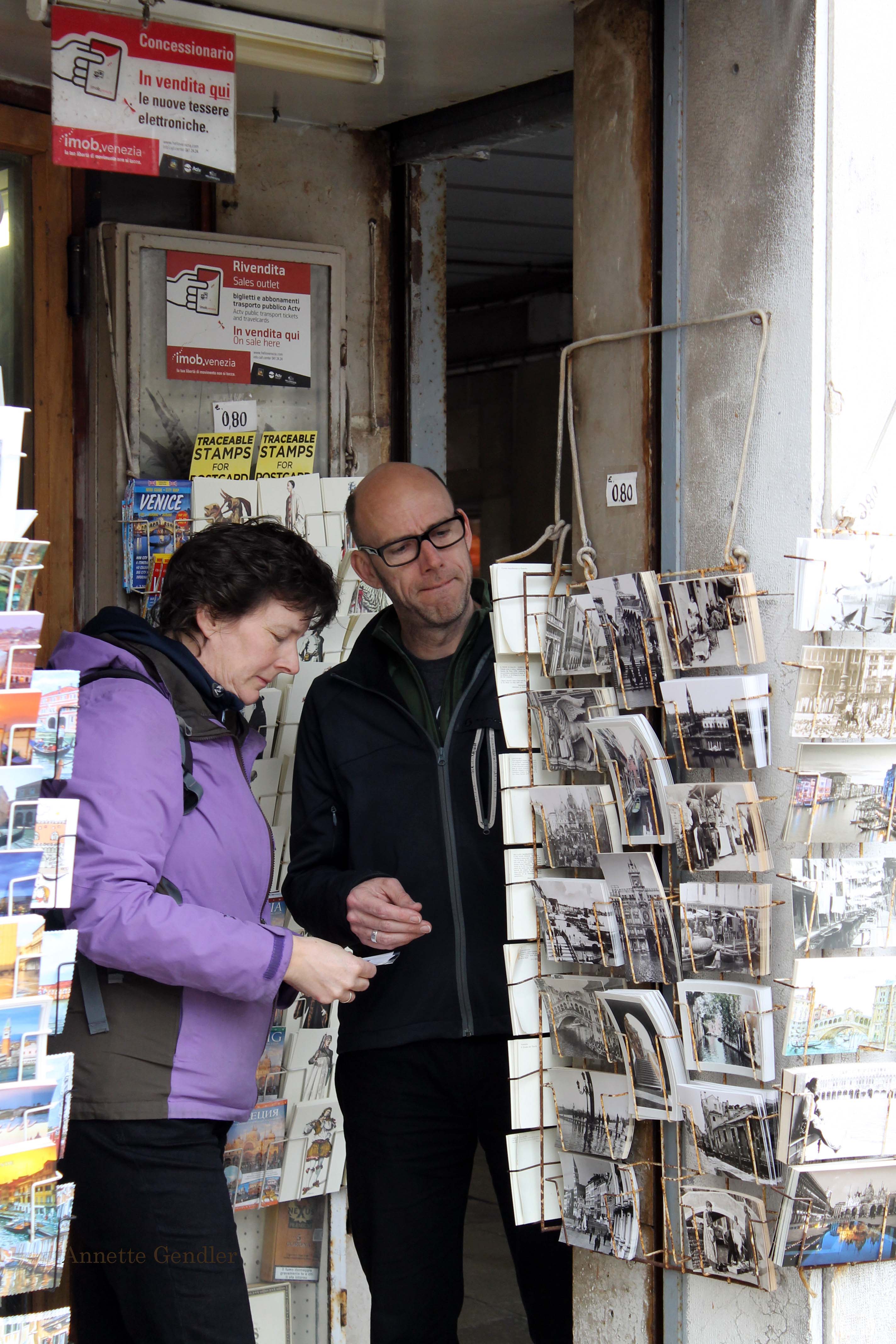 My brother and sister select postcards in Venice (March 2017).

A Postcard Writing Session on Every Trip

My sister and I have taken quite a few trips together, and whenever we have, a postcard writing session is in order. A joint postcard always goes to our brother, unless he’s also along as he was last year in Venice. Another postcard goes to our mother and, when she was still alive, our grandmother. Usually on the last day, we’ll discerningly search through postcard carousels at a tourist shop, if we haven’t picked them up already at a museum or another attraction. (We’ll be quite miffed when the selection isn’t up to snuff.)

Then we’ll settle in a café. A few hours will go by while we sip coffee, nibble some local delicacy, and write postcards. Occasionally we’ll say something to the other about someone we’re writing to. For the most part, however, it’s a time spent in quiet and industrious companionship. A time to digest the past days crammed with marveling at grand architecture or sweeping landscapes, tasting different foods, enjoying or enduring other climates. But also days of stuffing suitcases, riding taxis and buses, rushing to make it to the airport or the boat on time, threading through crowded streets, spending hours in the four-square feet of space of an airplane seat, gazing out the windows of buses, taxis, and cafés, marveling at the world outside. In contrast, the postcard writing session is

Two summers ago, my sister and niece arrived in Chicago for a long visit, a rare treat and also an intense time. After ten days of visiting, we had exhausted ourselves sightseeing and catching up, and so we settled into quiet companionship at my favorite café to write. Postcards in their case, an essay in mine. For me it was time to catch up with myself, and for them it was time to catch up with friends and relatives. 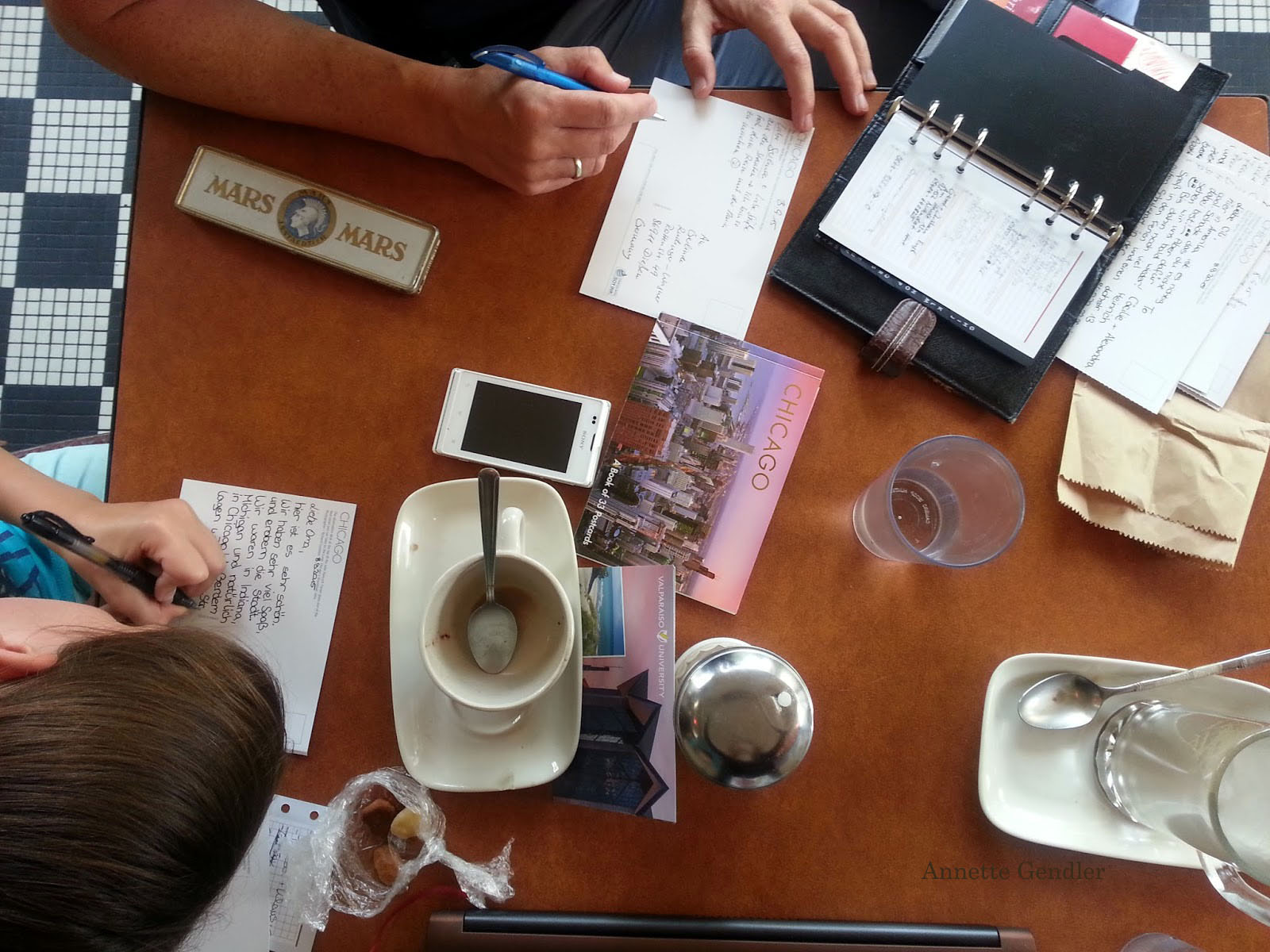 The Next Generation Writes Postcards, Too

My heart sang at witnessing our tradition of writing postcards passed on to the next generation as my niece reveled in her Chicago postcard book and carefully penned her notes. Not that she doesn’t spend a huge chunk of her free time on her phone. Of course she does but she also knows how to write a postcard.

Imagine my delight when a few weeks ago, I received my very own postcard written by my niece from her trip to Ireland with a friend’s family. No one in the family had prompted that fifteen year old to send me a postcard! And yet there it was, Irish postmark, cute handwriting and all! 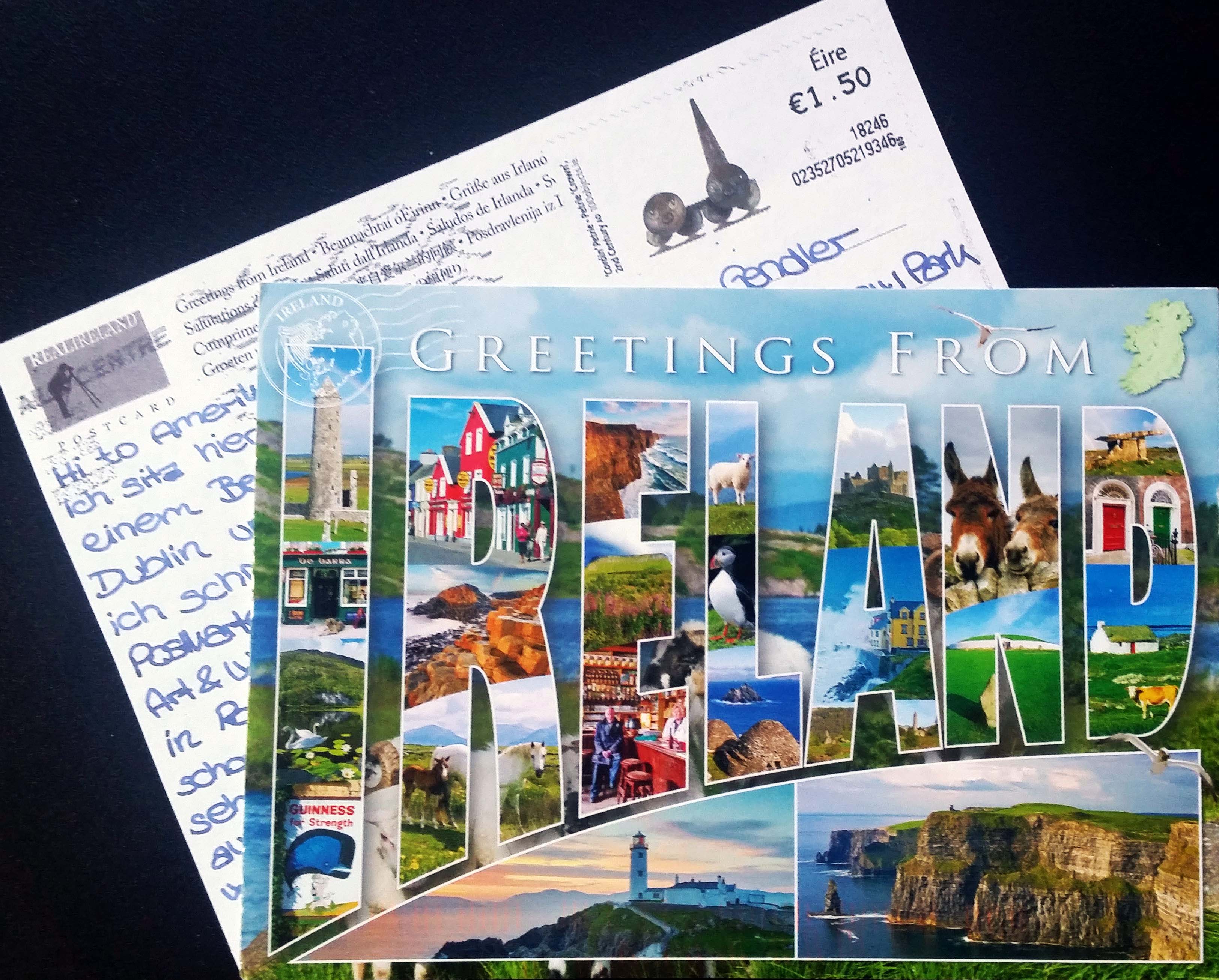 Snail mail has been a lifeline for me these past few months of convalescence. However, that postcard from my niece was the best, most delightful piece of mail I received!

We’ve done well, my sister and I, in passing on the tradition of writing postcards to at least one member of the younger generation, don’t you think?