The Benefit of a Traveler’s Daily WhatsApp Messages to a Friend: Boosting Mindfulness and Creating a Travel Diary 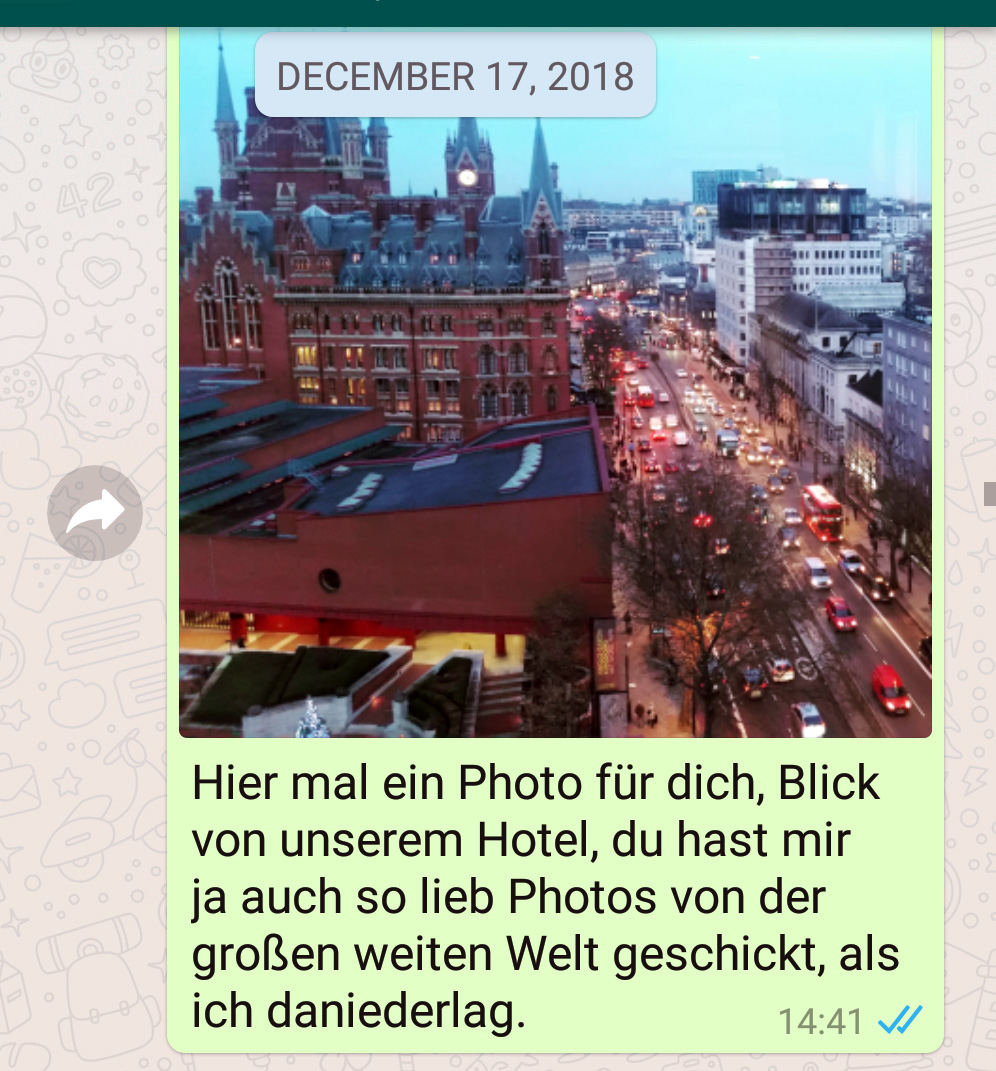 The WhatsApp message that began the daily ritual: “Here a photo for you, view from our hotel, you also sent me such nice photos of the big wide world when I was bedridden.”

On a trip, when days are jammed with activities, I simply don’t have the time. Plus I’m exhausted at the end of the day. And yet, precisely because on a trip days are so big, so way more full than they are in everyday life, it would be good to keep a diary. Not just a log of what I did when, but a record of what I thought, what I felt, what I loved and what I didn’t. Turns out I did just that when,

On our most recent trip, I sent nightly WhatsApp missives to a dear friend.

In London, on our month-long trip’s first leg, I received a message from my friend that she was stuck in the hospital with gall bladder problems. To entertain her, I sent her a few pictures with commentary from our day bopping around London. She’d done the same for me, sending me lovely pictures from a weekend trip when my life was largely confined to my bedroom as I was recovering from hip surgery.

“I really liked this bridge in Bath with all the little stores.”

What began as a way to cheer her up turned into a nightly ritual.

Throughout our month of traveling, every night, once I had plopped down in bed, I scrolled through the pictures on my Smartphone. I picked whatever had struck me that day and sent it off to my friend with a short explanation. Soon enough, I loved this ritual. My days were packed with so many impressions, so many encounters, so many discoveries that by evening I often couldn’t even remember all I’d done and seen.

Sending these WhatsApp messages let me recap my day, stop and be mindful.

It let me record some of my reactions that would have otherwise been lost in the next day’s deluge of experiences. Since I knew my friend was home, lonely and sick, I did it, even when I was utterly exhausted. I wouldn’t have had the energy and discipline to create a blog at the end of such days. However, I could dash off a few WhatsApp missives to my friend. Ultimately, my nightly discipline benefited me just as it benefited her.

“Typical Jerusalem: Pedestrian paths between buildings, often they also have names and entryways, and this one even has a little grocery store. Who says that a street has to be big enough for cars?”

The above is one of my favorites because it captures a mundane moment (the ones we tend to forget!):

But it also captures a quintessentially Jerusalem experience worthy of a travelogue. Not more than four feet wide, this path is still considered a street. It has a street name (Reuven Street) and house numbers. People enter their homes from this passageway. There is even a little market, off to the left in the picture (The path was so narrow I couldn’t get a decent angle on it to take a picture.). 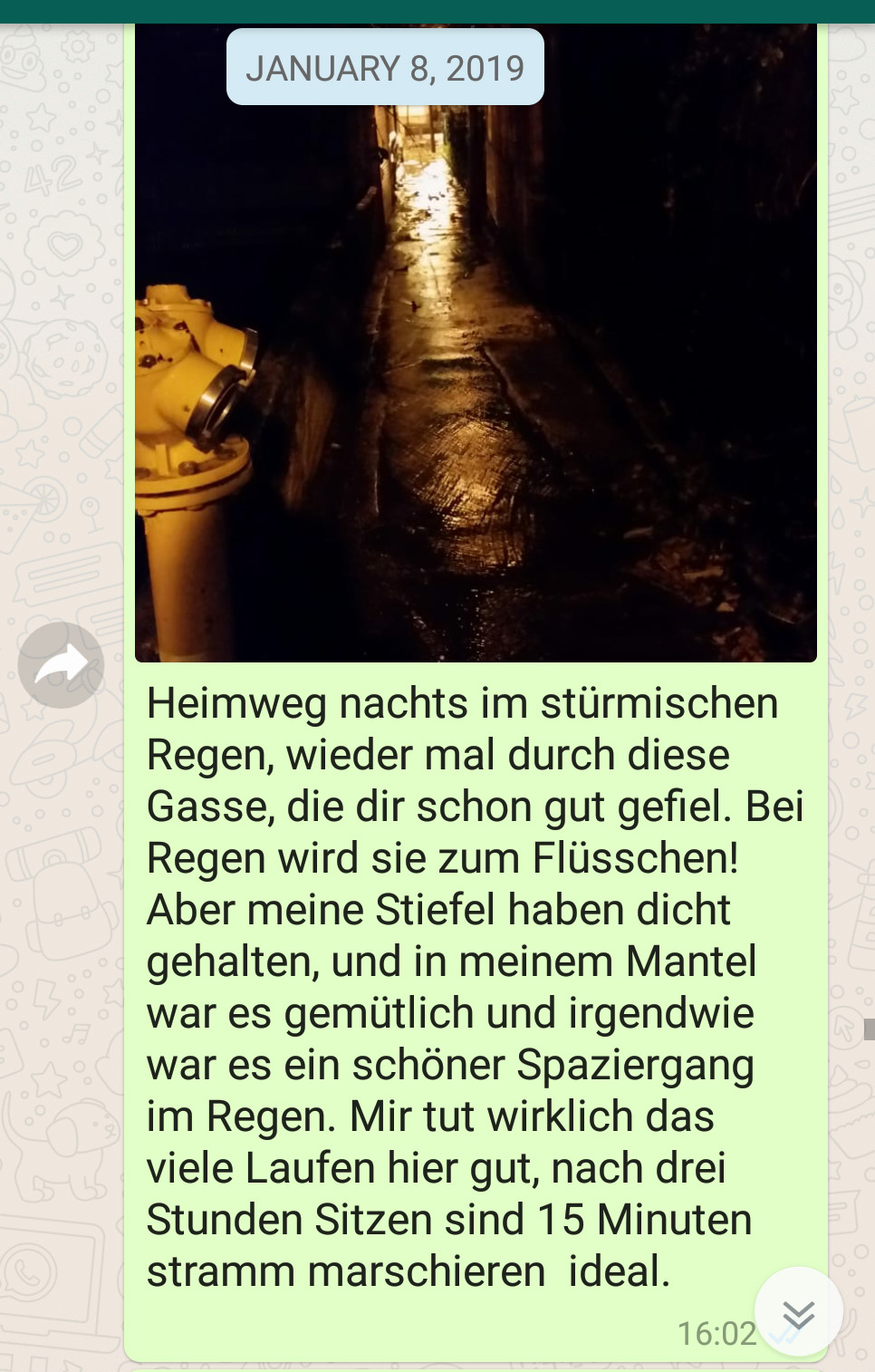 “The way home in a rain storm, again through the passageway you previously liked. When it rains, it becomes a stream! But my boots kept tight. It was cozy in my coat, and somehow it was a nice walk in the rain. All that walking here as really been good for me. After three hours of sitting, 15 minutes of rigorous walking are ideal.”

Of course, once I got the ritual going, I often took photos specifically to send to my friend.

The above picture of the passageway in the rain is one of those. I would probably not have taken it, had my friend not loved a previous one. Why otherwise would I take a picture in the rain, when I’m worried whether my boots will hold tight?

Turns out we need a reason to document.

Thankfully, with sending nightly WhatsApps to my friend, I had one. On my walks to Ulpan (Hebrew language school) or to meet a friend, I now had a reason to snap pictures. To photograph the houses, the stores, the everyday life I was witnessing in Jerusalem. On our trip to Jordan, I was compelled to take my friend along, at least visually, and give her an idea of what it felt like to be on our tour, to ride a bus through the Jordanian desert. 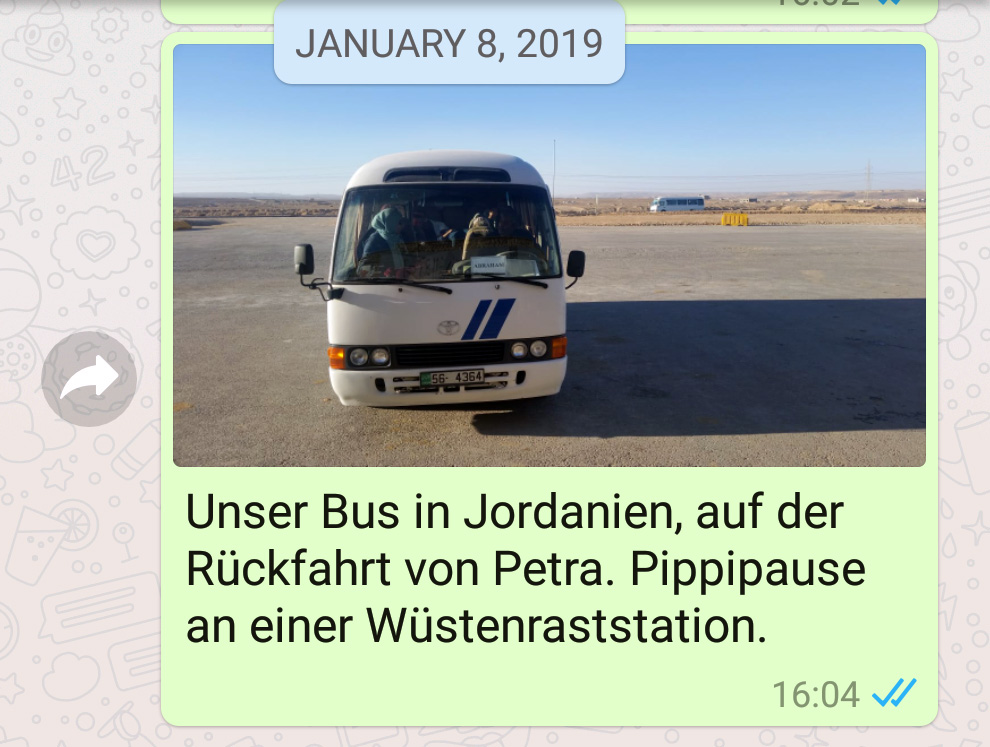 “Our bus in Jordan, on the return trip from Petra. Restroom break at a desert rest stop.”

While my friend worried that my daily messages were a tedious chore, they were, in fact, quite the opposite.

They were an efficient way to capture some of those many impressions and thoughts of a trip. They are in chronological and easily retrievable order. Our conversation is saved on WhatsApp, and now I have a travel journal. When I want to create photo essays from the trip, or assemble an album, I can verify when something happened. I can revisit my first impressions, and I could readily assemble this blog post!