Annette and the Terrible, Horrible, No Good, Very Bad Day 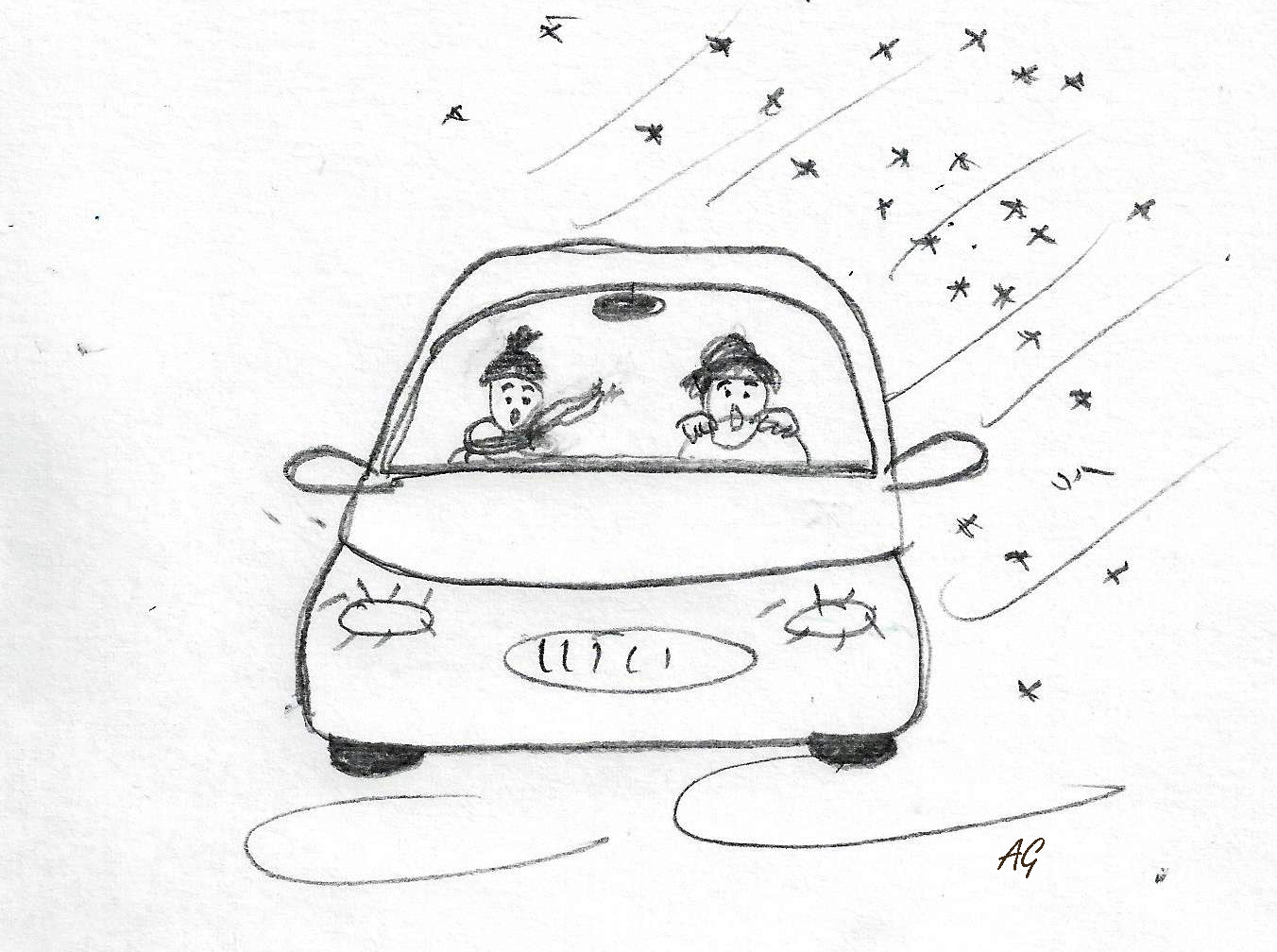 I was driving to my cousin’s house for dinner last week when two warning lights came on in the car. Then the instrument panel went dead. When I put on the indicator to make a turn, the clicking sound was gone. Was it working?

Still, I drove on along the icy, snowy roads of Lansing, Michigan. We made it to my cousin’s house. When we parked, my daughter checked while I flipped the indicator. Yes, it was blinking! At least I hadn’t been the idiot on the road.

Later, we made it back to our hotel with the car in the same state. It was driving fine, except for that instrument panel malfunction.

I couldn’t tell yet that the next day would be a terrible, horrible, no good, very bad day.

At breakfast I also couldn’t tell. Even driving my daughter to her MSU vet school interview at eight in the morning, with the instrument panel still off, I couldn’t tell. But driving back to the hotel, with a snow storm howling all around me, and a temperature of 10F outside, I realized: The heat in the car wasn’t working! And we had to drive back the 3 1/2 hours to Chicago that afternoon! At least that was the plan.

That’s when I could tell it was going to be a terrible, horrible, no good, very bad day.

I wasn’t going to have the quiet morning I had envisioned, enjoying my hotel room and maybe doing some sightseeing later. Oh no! I was going to deal with car trouble!

First, I called my husband. That’s always the first line of defense, even if he’s out of town as well, which he was. Of course there wasn’t much he could do except tell me to call our trusted longtime mechanic. So I did that. He had no clue what might be up with the car, and no remote fix, only the advice that I shouldn’t drive back without heat in these weather conditions. Duh! I should take the car to a Ford dealer in Lansing. So I called my cousin to see if she had any relationship with a Ford dealership. She didn’t. Then I called the three Fold dealerships I found on Google, but none of them could fit me in that day.

My daughter had to catch a flight from Chicago the next day, so we had to make the drive. My heart was sinking.

This was definitely going to be a terrible, horrible, no good, very bad day.

How to get some heat into that car? What ingenuity could I muster on my own, in a strange city?

Think, Annette, think! Come up with something!

How about a little space heater? The car had an outlet, right? If that was working, maybe that was a solution?

I trekked back out to the car, always treading carefully on the ice and snow. I am deathly afraid of falling and injuring my recently-operated-on hip (which was a side problem on this horrible day, as was my sciatica!). Sure enough, the outlet by the back seats had juice, at least when I plugged in my phone charger.

First I drove to a car parts store. I could barely open their door against the fierce wind. They only had space heaters that plug into the cigarette lighter, which surely wasn’t working. Plus I had no way of testing if it was.

It was a terrible, horrible, no good, very bad day.

So on I drove to Walmart in the suburbs of Lansing. I could already feel the cold moving into my sciatic butt.

At the back end of the enormous store I had a choice of small space heaters. How wonderful, really, to live in a country where these kinds of things are readily available! I also bought long underpants, fleece blankets, a hat for my daughter who had forgotten hers, and thicker gloves for myself. Usually, while driving, you don’t need big fat gloves!

Then, back in the frigid car, I fumbled the little space heater out of its snugly packaging, plugged it in and–nothing happened. No heat! Had I bought a lemon? Turns out I hadn’t–it worked fine when I tested it in the hotel later. The car outlet just doesn’t produce enough juice for a space heater. So much for that scheme.

It was definitely going to be a terrible, horrible, no good, very bad day. And a very cold day!

My daughter wasn’t due to be picked up until 2 p.m. Thankfully, the hotel let me keep the room that long (thank you, Residence Inn!). So I had some lunch and warmed up in my hotel room before trekking out again, with my luggage and my new purchases, to pick up my daughter. And then the miracle happened: I turned the ignition key and guess what! The instrument panel lit up like nothing ever happened! The heat came on! I could even warm up my seat! Oh, it felt so good!

Maybe this wasn’t going to be a terrible, horrible, no good, very bad day after all?

With the heat finally blasting, I was not going to turn off the car again. So we set out on our drive home and whenever we stopped for a restroom or coffee break, we took turns to keep the engine running, and the car warm.

At that point I was less stressed about the car’s condition and more worried about the road conditions. The snow was blowing horizontally. Ever so often we hit a white out. We encountered several accidents on the interstate. Cars were flipped sideways, semis towed, SUVs turned around. One time, Google Maps rerouted us on a snowy country road detour, snow blowing sideways still, to circumvent a major jam.

Then, two hours into the drive, while barreling down I-94, the warning lights came on again. The instrument panel died and with it the heat.

This was going to be a terrible, horrible, no good, very bad day after all.

The car was still driving fine, despite the warning lights, which I took to be part of the instrument panel malfunction. At the next rest stop we donned my Walmart winter gear purchases and wrapped the blankets around our legs.

On we drove. Thankfully, the car was now warm inside. The warmth drained, but slowly. We didn’t turn into icicles on the remaining two hours without heating. Still, I was stressed the entire time whether we’d make it, whether the car would cause more trouble.

How glad I was when we pulled up to our building at home! How wonderful it would be to be back in the heated apartment! Nobody else would be home, my husband and son were both out of town, but no matter.

Alas, when we arrived at the building door, all was dark. No light in the entrance, nor the staircase. I had to whip out the flashlight I always carry in my purse so we could make our way up to the third floor. Still, who cares? Surely our neighbors had alerted building management?

Was this day going to get more terrible, horrible, no good, very bad?

Once inside the apartment, I should immediately have noticed that I wasn’t breaking out in a sweat despite all the gear I was wearing. But I didn’t. I changed clothes and prepared a quick dinner.

Only after dinner did I notice: It was rather clammy in the apartment! Sure enough, all the radiators were ice cold! By now it was 10 p.m. and the heat wasn’t working? I called the emergency number. Our building manager called me back promptly to explain that yes, there was a problem. I wasn’t the first party to call; the building engineer was on his way. It was probably a circuit breaker that affected both the staircase lights and the boiler. OK fine, I thought, let’s end this horrible day. I’ll go to bed.

Only when I went to wash up, I realized: No boiler also meant no hot water. Now I was really done with this day! Thankfully, I have a nice down comforter, and the heating pad was working as well.

It had been a terrible, horrible day, but now it would end.

At 2 a.m. I woke up with excruciating pain in my abdomen. I recognized it must be a urinary tract infection because I have had one before, a long time ago. It took some painkillers and the heating pad before I could fall asleep again. I’d deal with this in the morning!

Thankfully, the next morning I got a hold of our doctor, who prescribed some antibiotics. My daughter was still home to pick them up for me so I didn’t have to venture out. Even though riding in the cold car the day before surely contributed, I had an inkling that that infection was on its way because I had ordered bladder tea a few days before. And–another miracle!–Amazon delivered that tea later that day.

So finally, I could retire to my bed with my heating pad, sip tea, and

recover from that terrible, horrible, no good, very bad day that I could not have made up, even if I wanted to!

But, as Alexander’s mom told him: “Some days are like that.”

Inspired by Alexander and the Terrible, Horrible, No Good, Very Bad Day.