Podcast Interview – The Difference between Autobiography and Memoir, and all Kinds of Other Points Pertinent to Writing Family Stories 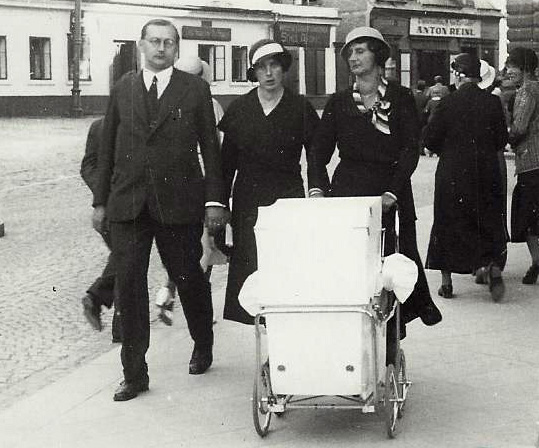 My dad’s first outing in the pram, pushed by his Aunt Resi (a major character in Jumping Over Shadows). Walking along are the proud parents, i.e. my grandparents, Karl and Hanne. Reichenberg, Czechoslovakia, 1933

I am happy to share that the lovely ladies of the Genealogy Happy Hour hosted me for their podcast episode this month. It was fun to talk to them about how to begin writing your family history stories, whether to reveal secrets you discover, or what to do with the stories once you’re done. Do listen in when you have a moment!

They asked me one question that I get asked again and again, so I thought I’d cover it in today’s blog post:

What is the difference between memoir and autobiography?

First of all, a memoir is a true story of the past.

It relies on memory (hence the name) and seeks to find the meaning of that memory. It is also a story that the reader will assume is true.
As soon as you start making something up, you’re moving into the realm of fiction. This is totally fine; just don’t put the memoir label on it, or you will get into trouble.

Labels are important because they manage reader expectations.

Hence all the brouhaha when a memoirist is found to have made up parts of his story. Readers expect memoirs to be true, and there is hell to pay if they are not. See the scandals over James Frey’s A Million Little Pieces, Greg Mortenson’s Three Cups of Tea, or, even worse, the entirely fabricated Holocaust memoir Fragments by Binjamin Wilkomirski.

So, back to the question: What’s the difference between autobiography and memoir? And why should we care?

Both are written by the person whose life is being narrated, right?

Yes, but autobiography is a chronological account of that life, from birth to a later stage in life. Memoir, on the other hand, focuses on a particular topic.

Autobiography is concerned with recounting what happened, with setting the record straight, with giving a behind-the-scenes glimpse into the life of a usually famous person.

Autobiography is not concerned, as memoir is, with introspection.

A good memoir is not an accumulation of anecdotes, however entertaining they may be. Rather, memoir is an inquiry into what those anecdotes mean to the narrator.

Unlike autobiography, a memoir does not comprise a whole life. Rather, it examines a particular phase in a life.

Childhood memoirs are a great example, such as Mary Karr’s The Liars’ Club, Tobias Wolff’s This Boy’s Life, or Frank McCourt’s Angela’s Ashes.

An autobiography is expected to tell everything; in contrast, a memoir tells something, namely everything that is related to the chosen topic.

This is one reason why memoir lends itself well to writing stories from family history: You often don’t know all the details, or maybe you aren’t free to write about everything. Memoir lets you be selective. It lets you pick the relevant stories.

Mary Karr is a great example. While The Liars’ Club recounts the story of her childhood in a dismal Texas oil town and a wildly dysfunctional family, her next memoir Cherry is about her promiscuous adolescence, and her most recent Lit tells the story of her recovery from alcoholism and finding solace in the Catholic faith. Whereas Mary Karr’s memoirs are circumscribed by time, Eileen Simpson’s, for example, explore different topics: Orphans (losing her parents early in life), Reversals: A Personal Account of Victory over Dyslexia, and Poets in Their Youth (her tumultuous early marriage to poet John Berryman).

Memoir captures what it is like to live in a particular time and to grapple with, and hopefully overcome, its particular struggles.

And this is also why memoir lends itself so well to shaping family history into compelling stories.