The One Gift from Grandma: an Amber-Colored Glass Candy Dish 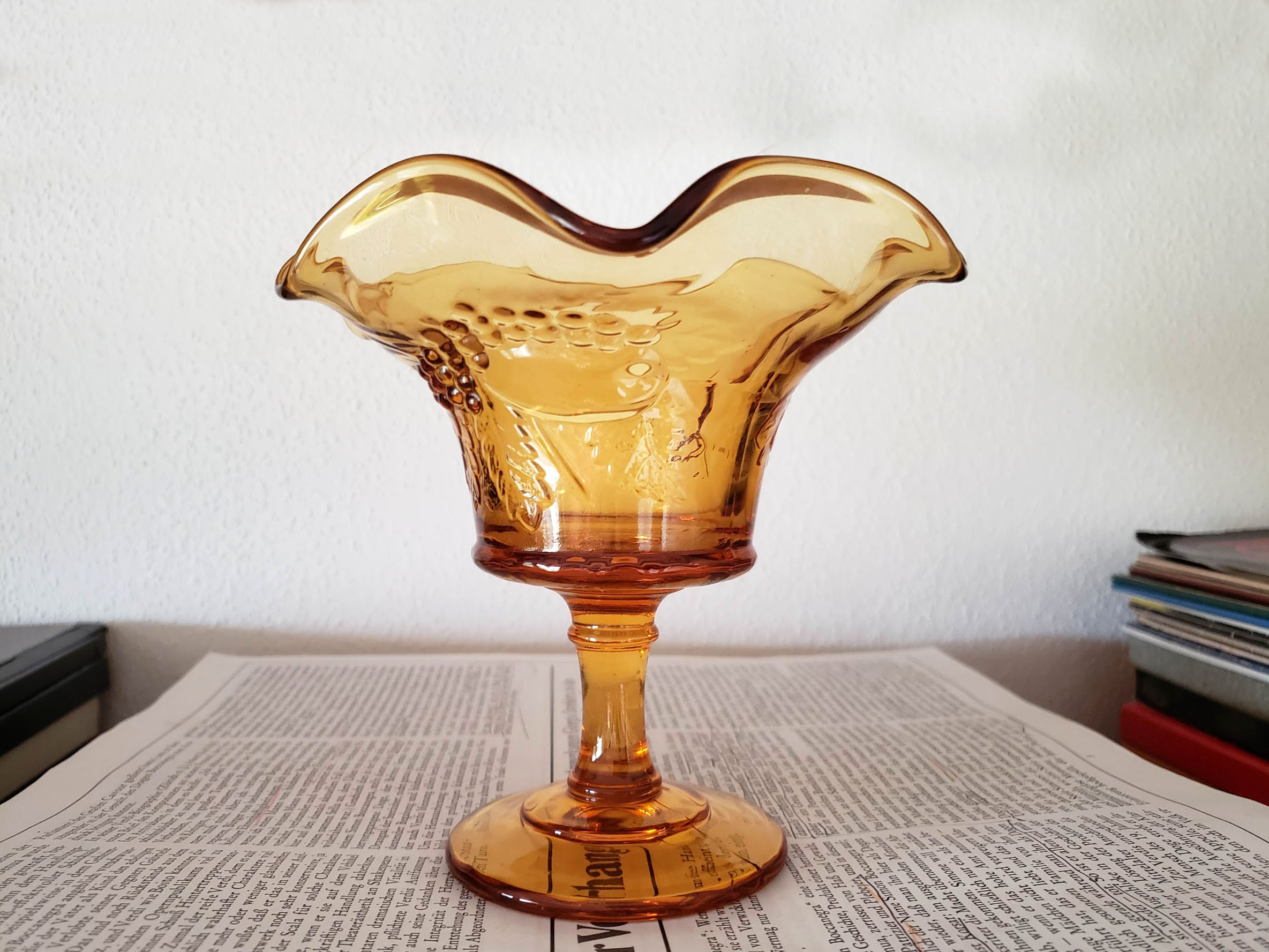 In 1978, when I was fifteen, my mother and I flew from Germany to Detroit for an extended trip around the U.S. First up was Michigan to visit her extended family.

By then, my mom and her mom had been estranged for several years.

We stayed at her older brother’s place, which was more like a bustling chicken coop with eight teenagers/young adults coming and going. Dirty clothes piled high in the laundry room, and there were plenty of people for backyard softball games on Sundays.

Mom probably would have preferred not to see her mother at all, but she must have felt obligated to make at least a perfunctory visit. Thus, we did visit Grandma for an afternoon in whatever apartment she was living at the time. One of my uncles had to come along as Mom would never again be “caught alone with that woman.”

While the adults sat on plush couches making small talk, I inspected the pretty glassware Grandma had on display. I had nothing else to do, and I’ve always loved glass.

Grandma noticed and said, “Pick one you like. I’ll give it to you.”

I chose an amber-colored, pedestaled glass candy dish with a wavy bowl.

It was nothing special; she had probably bought it in some gift store. For sure it wasn’t a family heirloom or valuable glass. Nevertheless, for years I had that amber bowl sitting on a shelf in my room at home.

It was the only thing I actively recalled receiving from Grandma.

I must have left it there as it faded from my view after I moved in with my boyfriend in my early twenties. Later, when we moved to the U.S. for me to attend graduate school, I didn’t even consider taking it along.

My memory of that dish, however, did not fade. To this day, I have a weakness for amber glass.

Last fall I was visiting Mom in Germany. Her own memory fails her now. Every day, my sister, who lives close, stops by to make sure Mom eats and takes her meds. Mom still remembers to eat breakfast, so much so that sometimes she breakfasts twice.

Every morning, she sits in her rocking chair by the window, a bowl of granola in her lap. With a paring knife, she meticulously cuts up the bigger chunks that would bother her dentures. The chunks she can’t cut, she tosses into a bowl on the window sill.

And that bowl, I finally noticed, is the amber bowl Grandma gave me.

There it sits, on the window’s marble ledge among Mom’s many glass tchotchkes, the amber gleaming golden in the morning sunlight.

When I mentioned the bowl to my sister, she laughed and said, “Good to know. That’ll go to you when the time comes.”